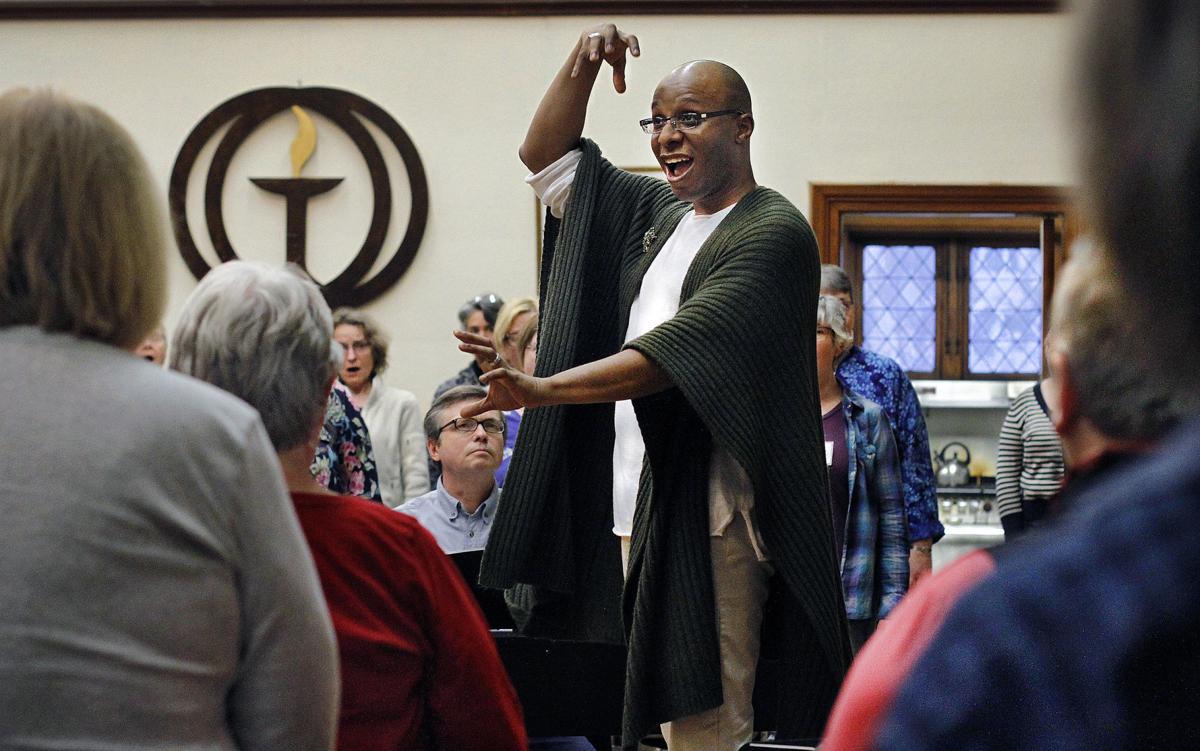 Cailin Marcel Manson, music director of the Keene Chorale, leads the group through a rehearsal at the Keene Unitarian Universalist Church Tuesday night. 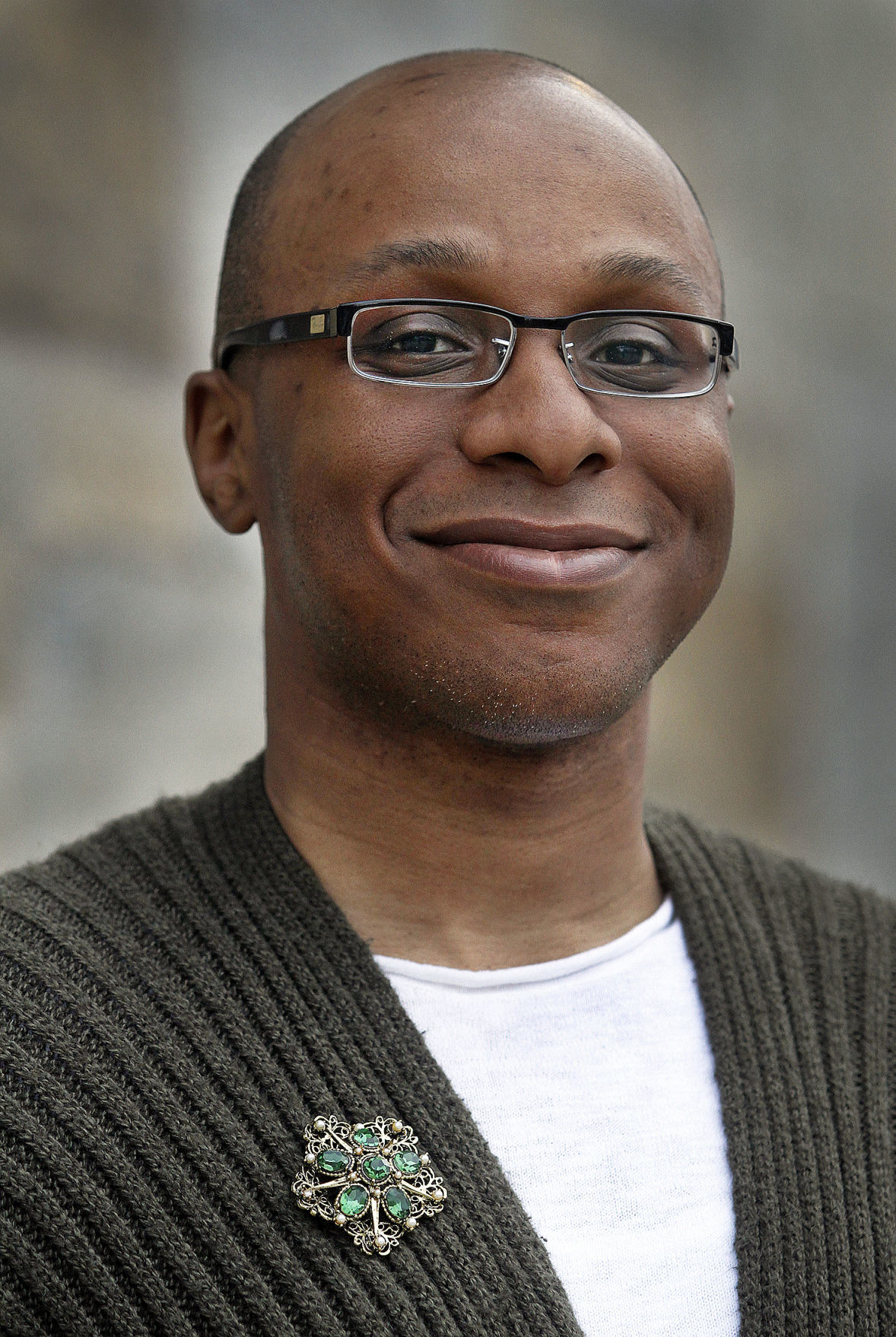 Cailin Marcel Manson, music director of the Keene Chorale, leads the group through a rehearsal at the Keene Unitarian Universalist Church Tuesday night.

On the podium, Cailin Marcel Manson is electric.

That’s his own word — but there are few others that would describe this conductor better. As the music swells, he might mark a significant moment with an emphatic stomp or a flick of his baton, then shift to a smooth sweeping movement as he reaches a legato section, almost painting the notes with his arms.

It’s all about energy, he says.

By day, Manson is the musical director at The Putney School in Putney, Vt. But his work doesn’t stop there. Twice a week, he conducts community choral groups, making the trip to Bennington, Vt., for rehearsals of the Bennington County Choral Society and driving across state lines to conduct the Keene Chorale.

The 35-year-old Philadelphia native’s career in music began long before he started conducting in the Twin States. After graduating from Temple University with a degree in music performance, he was accepted to the Universitat Mozarteum in Salzburg, Austria, to study opera, later adding a second concentration in orchestral conducting. What followed were years of performing around the world in Europe, Asia, South America and the United States.

When he first came to New England five years ago to teach at The Putney School, he was struck by the vibrance of the local arts community, Manson says.

“Especially being a city person, when you come to a rural area, you don’t think of it being as culturally rich as this particular area is,” Manson says. “There’s a lot going on all the time, and so it’s good to be a really active part of that in whatever way I can be.”

And he certainly does stay active. Outside of his regular rehearsals with community choirs, Manson continues to perform in regional opera productions, most recently in the role of the Count in a January production of “The Marriage of Figaro” with the Panopera company in Northampton, Mass.

It would be difficult not to see a contrast between his life as a professional touring musician and as a conductor and music teacher. But Manson says working with community musicians keeps him sharp and gives him an opportunity to share his knowledge with passionate performers.

“In some ways, I find that the investment in the art is bolstered and made more powerful when you are dealing with non-auditioned community organizations. Because they — rather than being passive observers of this music — they are completely invested and more fully understand the art form,” he said. “The art becomes theirs rather than something they go to see people do.”

This season marks Manson’s 15th as a professional conductor, and to honor that milestone, he will conduct two performances of Giuseppe Verdi’s “Requiem” in Bennington, Vt., and Northfield, Mass., in May. The performances will bring together the Keene Chorale, the Bennington County Choral Society, the Putney Madrigals, the Putney Community Orchestra and even the Germantown Concert Chorus of Manson’s native Philadelphia. He founded the chorus and leads it in the Germantown Choral Festival each summer.

Despite the distance that separates the different organizations he leads, Manson says he views each of them as part of his “extended musical family.”

What’s more, bringing these groups together will bridge geographic, generational and racial gaps, he says, noting that the Germantown Concert Chorus is predominantly African American.

For Amara Cunningham, admissions office manager at The Putney School and a flautist in the Putney Community Orchestra, Manson’s impact on those communities is clear.

“Just being in the orchestra and seeing firsthand how students respond to his style of conducting and teaching — he holds everyone to a high standard,” she says. “I feel like even when people might be struggling, they are inspired to meet that standard and to be a part of a group that has a really well-defined sound and presence.”

Looking at Manson now, he seems like a natural-born teacher. But the decision to step back from performing and focus on conducting was not an easy one, he says.

Though he had grown tired of the “hamster-wheel” lifestyle of a performer, which sometimes felt like a conveyor belt of hotel rooms and suitcases, the prospect of leaving performance felt like letting down all of the people who had supported him, he says.

He recalls looking through some old journals from his teenage years — which he keeps in an old Bombay chest filled with programs from all of his performances — and reading the goals he’d set for himself when he was just starting out. He had wanted to become a world-class musician and earn his livelihood through making music — both of which he had achieved.

Manson says he knew it was time for the next step. And when he thought about his career, he realized there is a common thread he hadn’t acknowledged.

“... I always had had kind of this vocation to service, whether it was the life of faith that I’ve been brought up into, or that truthfully being an artist is about not serving the audience, but serving something greater than yourself,” Manson says. “I realized that, actually, I had been doing all of these things to make myself able therefore to impart that to others. And I realized I had been teaching that whole time.”

In his work with community musicians, Manson is constantly teaching, peppering in historical facts and music theory concepts between measures of the “Requiem.” He sees his role as not just shaping and guiding the music, but helping musicians understand it, as well.

For some students, Manson has opened a door to music and encouraged them to walk through it.

“My life sort of changed in the realm of music when Cailin showed up,” Cunningham says. “It’s just — he’s a really, really special person I think for a lot of people, but for me personally, I have never had so many opportunities to play wonderful music in my life, and never been so committed to making beautiful music.”

In the next 15 years of his career, Manson says he plans to enjoy the feeling of having nothing left to prove. His focus now is on his students, both in and out of the classroom, and helping them reach their potential as musicians.

“I think it’s a marvelous thing when you can get a moving, excellent performance from the people next door,” he says. “That can only make everything better.”

At a Glance: Cailin Marcel Manson