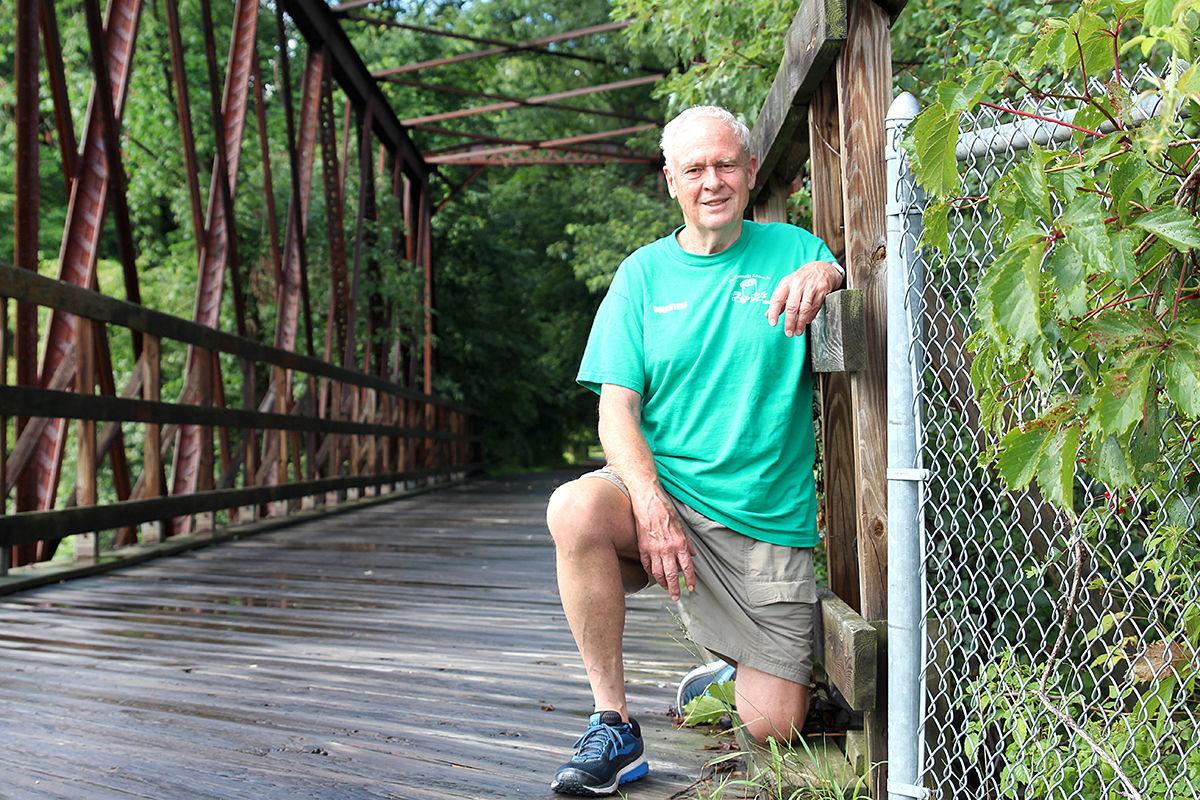 Don Hayes is seen near a bridge on the Cheshire Rail Trail near Keene State College. Hayes worked for the college and is a longtime volunteer in the region. His volunteer duties have included serving on the board of directors for several organizations, such as Rails to Trails. 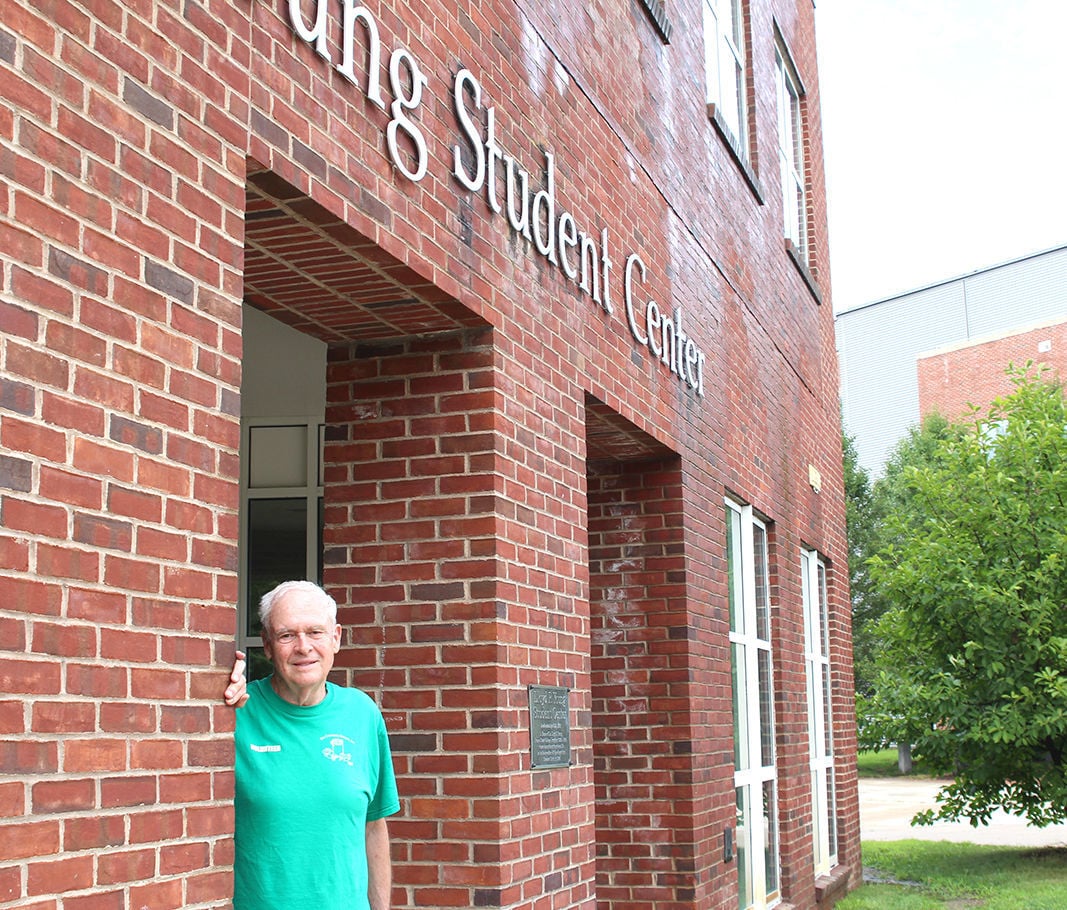 Don Hayes is seen outside the L.P. Young Student Center at Keene State. He had a third-floor office in the student center, where he coordinated community services on campus. 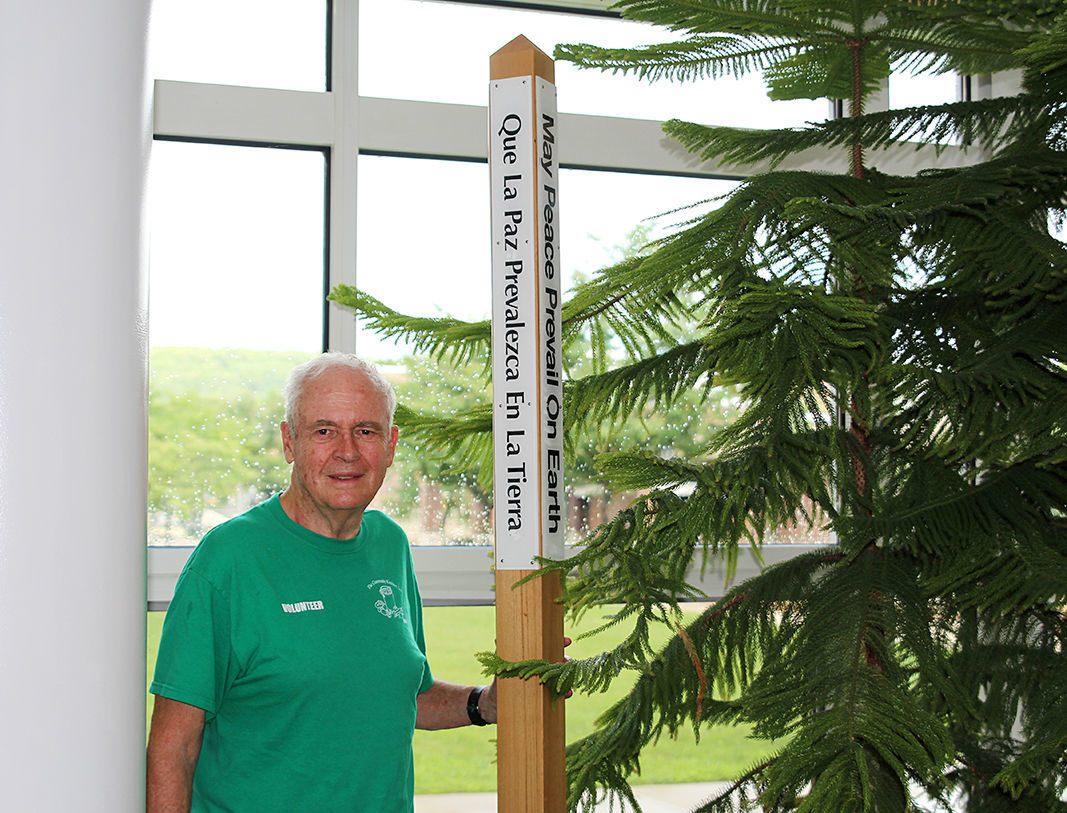 Don Hayes is seen near a bridge on the Cheshire Rail Trail near Keene State College. Hayes worked for the college and is a longtime volunteer in the region. His volunteer duties have included serving on the board of directors for several organizations, such as Rails to Trails.

Don Hayes is seen outside the L.P. Young Student Center at Keene State. He had a third-floor office in the student center, where he coordinated community services on campus.

Don Hayes will be the first to tell you he doesn’t seek the spotlight.

Though the Peterborough native and Keene resident has served on the boards of numerous local organizations, spent countless hours volunteering and helped inspire many others to get involved in the community, he’s not quick to brag.

He prefers to do his work behind the scenes.

Now, as he prepares to move with his wife, Mary, to a retirement community in Concord in August, Hayes is looking back on his years of service in the Monadnock Region.

He says his love for serving the community started with his grandfather, who was the minister of a small church in Massachusetts and opened a summer camp for youths who couldn’t afford to attend traditional camps.

Working at the camp as a young man helped spark Hayes’ interest in helping others.

“As I got older and sort of settled, I really wanted to become more involved in service in lots of ways,” he says.

In 1992, Hayes took a job as the coordinator of community service at Keene State College, where he connected students with volunteering and service opportunities throughout the region. He helped oversee the campus chapter of Habitat for Humanity — having founded chapters of the organization in Brattleboro and Keene — and led service trips abroad to places such as Guatemala, El Salvador and Costa Rica.

Since retiring from the position in 2006, Hayes’ commitment to community involvement hasn’t faltered. When it comes to the causes he cares about, his philosophy says it all: “It’s not a handout — it’s a hand up.”

Now 78, he’s the president of the board of directors at Monadnock Developmental Services, a nonprofit organization in Keene that supports people with developmental disabilities. His list of previous board positions could fill a book — from the Keene Chorale, to Kiwanis, to the Cheshire Housing Trust — and he spends many an hour volunteering at the Hundred Nights homeless shelter in Keene, coordinating overflow beds through his church, the United Church of Christ.

He also previously served on the board of The Community Kitchen in Keene, where he now volunteers once a month as a guest chef. After leaving his board position, he wanted to get back into the “nitty-gritty” of volunteering, Hayes explains, leading a team of eight volunteers from the local Kiwanis club, of which he’s also a member, to prepare the meal.

Hayes says he enjoys the challenge of designing a menu with what’s on hand, often learning just a day or two in advance what ingredients will be at his disposal. He usually has to get creative. After visiting The Community Kitchen to take stock of the supplies, Hayes and his wife comb their recipes for suitable dishes.

When his volunteers arrive to begin cooking, they always greet him with a good-natured, “What are we making today, Don?”

Much like his ability to create something delicious from a set of unexpected ingredients, Hayes seems to have a knack for bringing all kinds of people into his causes. He calls board development one of his hobbies, noting that he’s always on the lookout for people who might have expertise related to the organizations he works with.

“Whatever the group is, whatever the organization is, I like it to be a community of not necessarily like-minded people, but people with a heart and soul for whatever it is,” he says.

That’s how Keene resident Mike Ward, a longtime friend of Hayes, first got involved in community service. Ward met Hayes 20 years ago when Ward was working in Keene State’s community service office as an administrative assistant.

One day, Hayes asked Ward if he’d like to help run a Habitat for Humanity service trip to the Dominican Republic — and that first trip turned into years of serving in the various organizations Hayes is involved with.

“He really made me appreciate how much more I could do personally. And I wouldn’t say he pushed me, but by asking me, he got me to do things I never would have done on my own that I’m glad I did,” Ward says.

And the concept of community is important to Hayes in more ways than one. He says his friendships are what he’ll miss most about living in Keene, and he’s always kept his social calendar full outside of his many service hours. When he’s not skiing, hiking or biking, he’s grabbing a weekly beer with friends or discussing the latest read in the book club he and Ward founded.

“He’s like a shark; he can never rest. He’s always moving,” Ward says with a laugh.

Hayes still speaks fondly of the students he worked with in his time at Keene State, noting that he’s been fortunate to attend some of their weddings over the years.

He originally took the job because he wanted the opportunity to work with young people. Though he’d spent some time as a health care administrator — after getting his master’s degree in human services administration from Southern New Hampshire University — he was looking for deeper human connection in his work.

He’ll never take credit for what his students accomplished during his tenure at the college, but he will boast that they were able to secure Millard Fuller, founder of Habitat for Humanity, as a commencement speaker in 1999. During Fuller’s visit, Hayes says, the students also hosted a community dinner, which led to donations that funded the construction of three homes for people in need.

Today, he’s proud to see that some of his former students have continued to give back to their communities in adulthood.

“That’s the real satisfaction for me, when I look back and realize that the generation, a couple of generations before me are carrying on that tradition in different ways, whatever way they want to do it,” he says.

In local service organizations, Hayes’ departure will certainly be felt.

“He’s always into things; he’s in the background, but he’s like the backbone of the community service community in Keene,” Ward says. “Hundred Nights, and the church, you name it — he’s into everything.”

Leaving the Monadnock Region for Concord will be bittersweet for Hayes — but he’s ready to begin the next chapter of his life and begin building a new community in his new home.

“I feel like I’ve left my mark. I think a lot of people are in a better place today than they were 20 years ago in some of the programs I’ve been involved in,” he says. “Not all because of me, but the support of lots of people to make it happen.”

At a Glance: Don Hayes