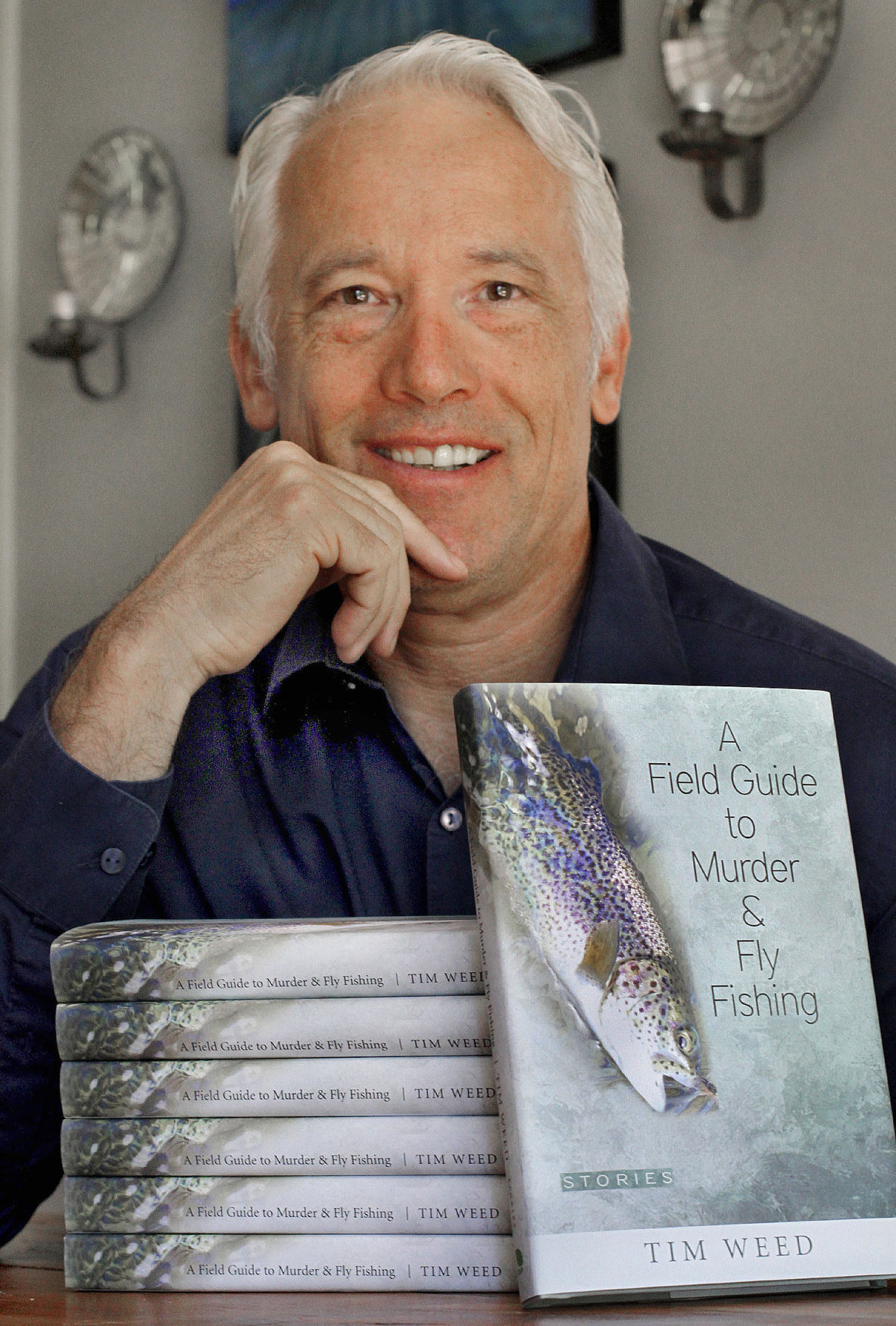 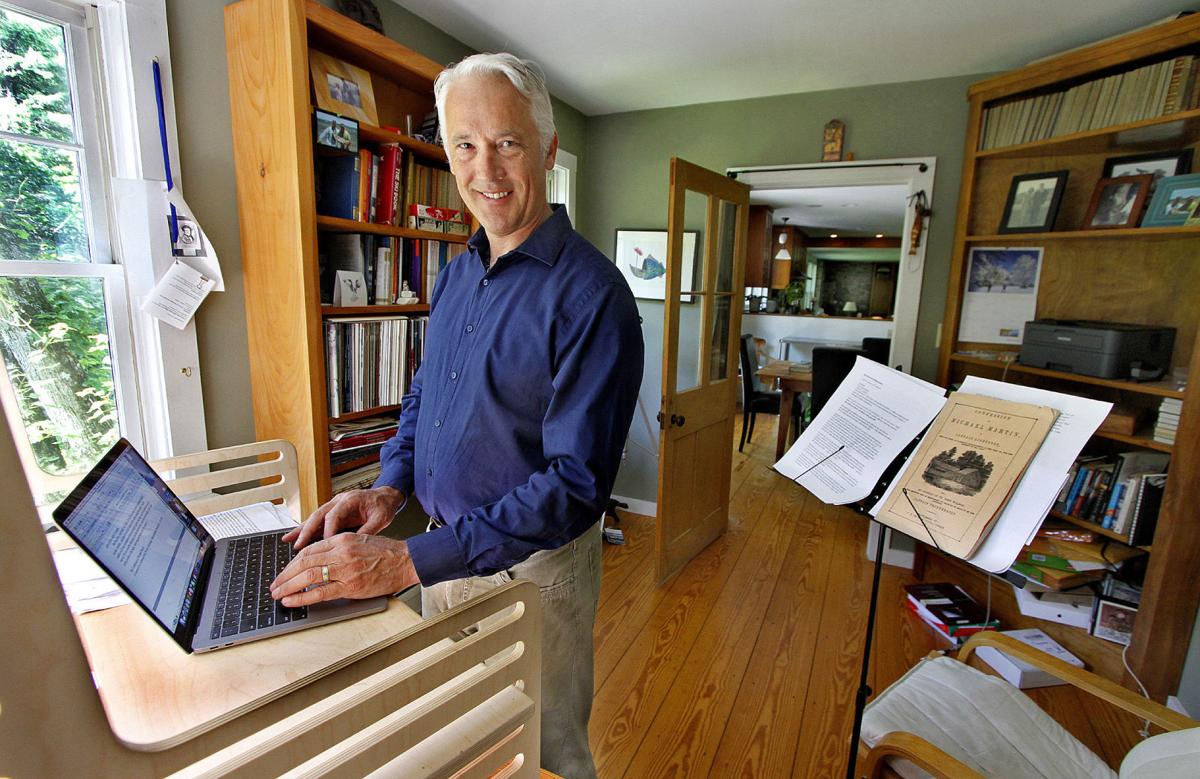 Author Tim Weed stands in the study of his Westminster West, Vt., home, where he writes standing at his computer.

Author Tim Weed stands in the study of his Westminster West, Vt., home, where he writes standing at his computer.

The second story in Tim Weed’s newly published collection of short fiction opens in a setting that many in the Monadnock Region may think they’ve heard of or visited: the “Fitzwilliam Quarry.”

For local readers, the name may conjure images or associations with the Webb Hill Quarry, a granite mine between Webb Hill and East Lake roads just south of the Fitzwilliam Police Department that’s also a popular swimming spot.

But the quarry Weed transports readers to in the story “Tower 8” is different than the quarry visitors may know in real life. It’s a pastiche of various quarries he said he visited growing up in the region.

The quarry in the story is where the narrator recalls — in a nostalgic tone tinged with trauma — his friendship with a fellow Keene High School student and the psychedelic LSD trips they experienced there.

The story moves from the quarry to other spots in Southern New Hampshire and is a meandering, drug-addled and tragic meditation on coming of age — one that reminds readers of adolescence, when many feel they can supersede human limitations.

Weed, 52, of Westminster West, Vt., said much of his new book of fiction, “A Field Guide to Murder & Fly Fishing,” was influenced by the time he spent growing up in Keene, Walpole and Richmond in the 1970s and ’80s.

The book was published by Green Writers Press, a Brattleboro-based publishing house, in April.

At Keene High School, where he graduated in 1983, Weed said he drifted through a rigid system of social cliques and didn’t really find his place until his senior year.

“I felt very much like an outsider, which was very difficult for a teenager but very good for a writer,” he said.

While he spent much time in New Hampshire as a child, he also grew up around the country and the world. Born in Burlington, Vt., Weed’s early years were spent in Denver. His family also lived in British Honduras, the country now known as Belize, while his father, Charles F. “Chuck” Weed, was a doctoral student and researching his thesis.

Chuck Weed, of Keene, represents the city, Marlborough and Roxbury as a Cheshire County commissioner and is a retired Keene State College professor of political science. He also formerly served in the N.H. House of Representatives.

“I have a lot of really vivid memories from that time. ... I think it really encouraged my interest in getting out abroad,” he said.

After graduating from Middlebury College in Vermont in 1988 with a degree in Spanish, Weed made a career of traveling the world.

For years, he worked for Putney Student Travel, a company that takes high school students on educational global excursions.

Weed led programs for the company throughout Latin America and Australia, and developed community service-based programs in countries such as Costa Rica and Ecuador.

Later, he worked for the Brattleboro-based School for International Training, where he led college semester-abroad programs in countries, including Spain, Australia and Venezuela.

He eventually returned to Putney Student Travel and in the late 2000s started working for National Geographic, leading and organizing some of the company’s international student exhibitions.

Today, Weed still works for National Geographic; next week, he’ll head to northern Cuba to lecture students traveling there with the company on Cuban history and writing.

Weed also runs his own travel company, Creative Travel Arts, which he founded around 2013 out of his home in Westminster West. He lives with his wife, Julia Jensen, and has two children: his daughter, Roo, 20, and son, Toby, 18.

Through Creative Travel Arts, Weed said he mainly leads and organizes trips to Cuba and Spain.

When he’s not traveling the globe or arranging educational trips for others, he’s writing or teaching students about writing.

Weed started writing in his late 20s, after returning to Putney Student Travel and feeling an urge to be creative while working what was often a desk job.

Many of the 13 stories that made it into “A Field Guide to Murder & Fly Fishing” were pieces he started working on in those early days.

“I sort of think of these as the stories that taught me to be a writer,” he said. “To see them together, finally, in this collection is a wonderful feeling.”

Most of Weed’s stories are dark. But he believes fiction has to be that way.

“The sort of life blood of fiction is conflict, and if everything is just wonderful and golden, there’s not much conflict, and so there’s no reason to read on,” he said.

One of his stories, “The Money Pill,” follows an American tour guide in Cuba, who exploits his wealth to gain the affection and attention of local women.

Many of his stories grapple with issues of class; several of his protagonists are working-class figures. “Scrimshaw” follows a construction worker on Nantucket who works as a caretaker for summer homes.

“The Afternoon Client” tells the tale of a fishing guide in Nantucket who takes a wealthy, demanding client out on his boat one afternoon.

At the end of the story, the guide uses his isolation out on the sea as an opportunity to violently retaliate against the client’s entitled nature.

This story won a Writer’s Digest Popular Fiction Award in 2014 after it was originally published in the literary journal Sixfold.

“I think Tim has a really fresh take on stories like coming of age, fidelity, guilt and transgression,” Dede Cummings, Weed’s publisher at Green Writers Press, said. “These stories are not sugarcoated, and I like that.”

Cummings also said that in his writing, Weed evokes a strong sense of place.

This is one of the goals of Weed’s work.

By writing about places that may be unfamiliar to readers — foreign countries and the wilderness or states of mind like dreams or drug trips — Weed said he can describe settings in a more unusual way that can captivate readers.

“My goal is to write immersive fiction that sort of transports you and catapults you into the dream of it,” he explained.

“A Field Guide to Murder & Fly Fishing” is not Weed’s first published book of fiction. In 2014, he published his first novel, “Will Poole’s Island,” which is set in 17th-century New England. It tells the story of a young English hunter who goes on a quest with an elderly Wampanoag shaman.

Weed is working on another novel and has a completed one that’s set in both Cuba and Nantucket, which he’s looking to publish.

In all of his work, Weed said, he’s trying to attract an audience that values not only good literature, but good storytelling,

“When you start reading it, I don’t want you to have to stop,” he said. “I want you to keep going.”

At a glance: Tim Weed