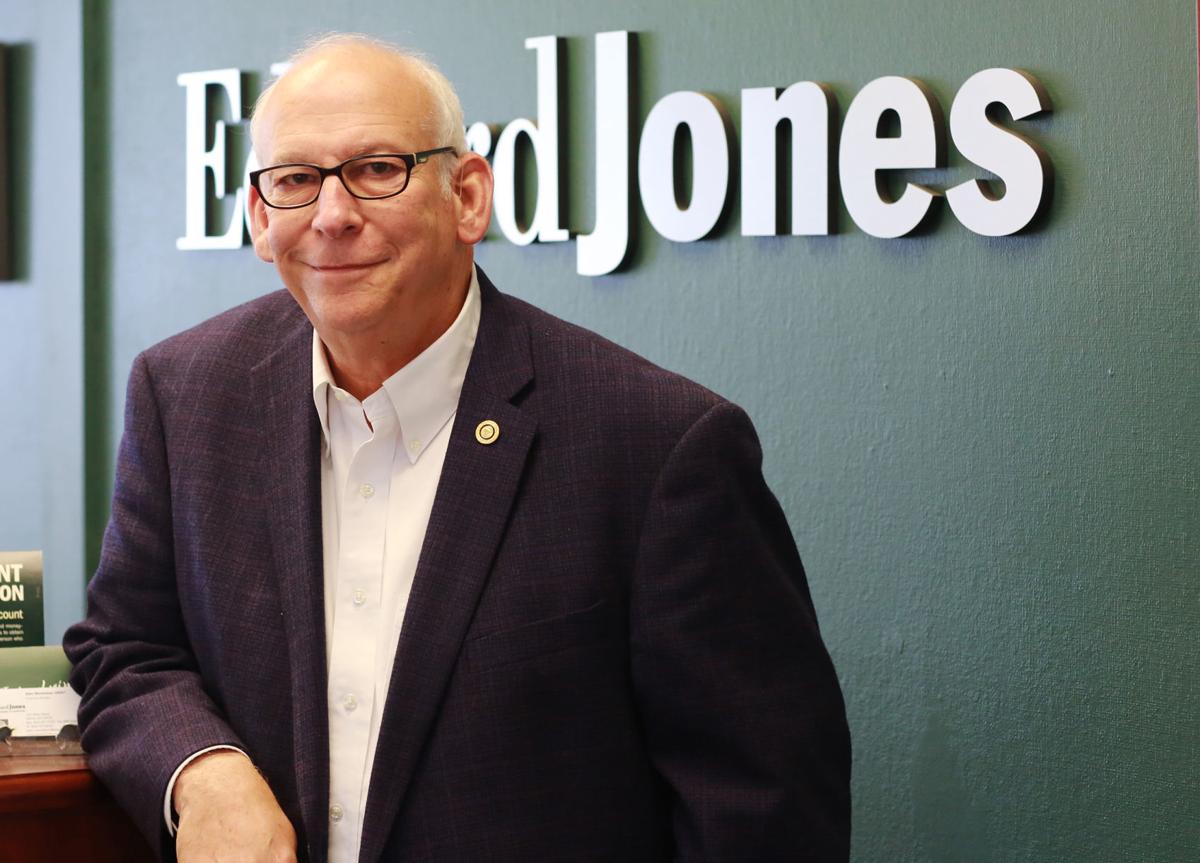 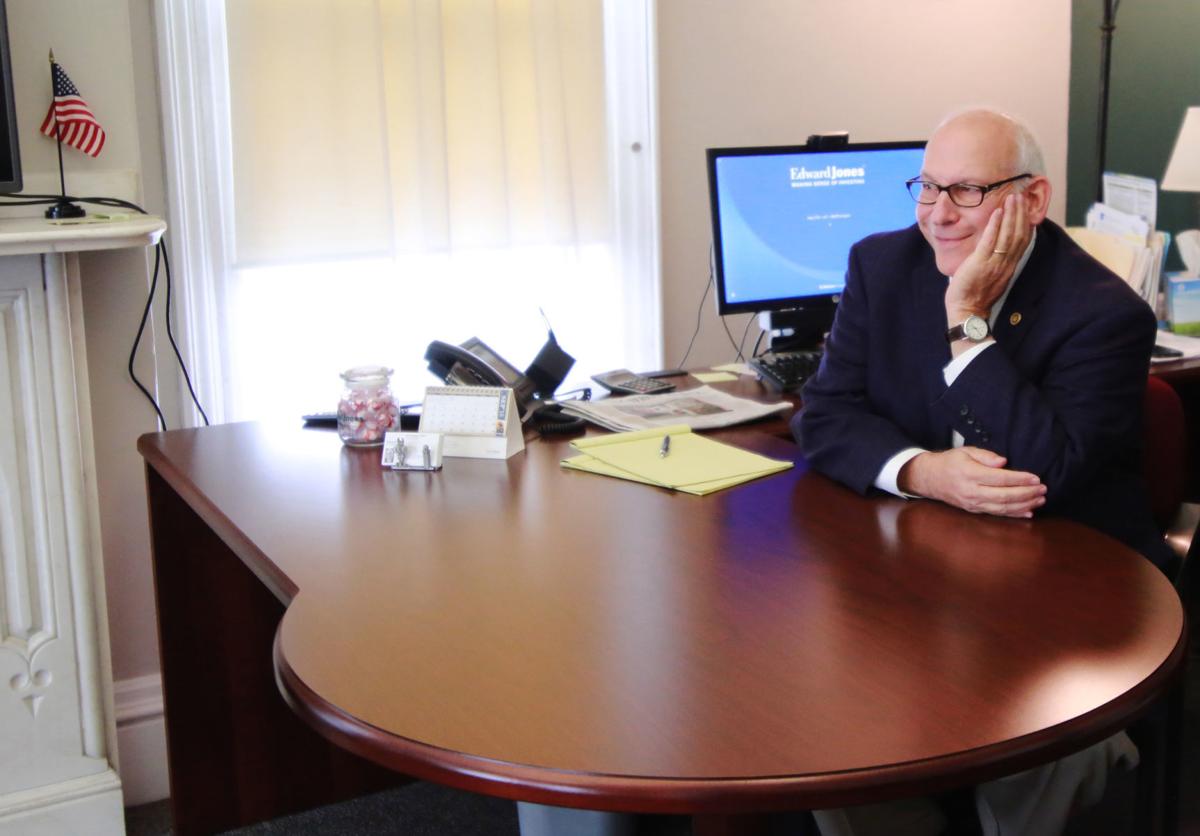 Allen Mendelson of Keene has worked as a financial adviser at Edward Jones since 2002.

Allen Mendelson of Keene has worked as a financial adviser at Edward Jones since 2002.

Many Americans may not know this now, but it was only a little more than a half-dozen decades ago that polio was the most feared disease in the land, striking terror into the hearts of parents, as it often hit infants and children.

For Allen Mendelson of Keene, the disease is not some historical footnote, but part and parcel of what he has become — a shaper of his personality and his outlook on life and others.

The prominent, 69-year-old Keene financial consultant and highly-active volunteer leader of nonprofit organizations, contracted the disease as a baby of 1½ years old. Polio is a highly contagious disease and until the now-famed researcher Jonas Salk developed a vaccine to combat it in the early 1950s, it handicapped and killed millions worldwide.

“I have an empathy for people, and I think it all started with my polio,” Mendelson said. “I’m sensitive to other people.”

He recalls that polio separated him from the other children, with the heavy braces he had to wear on his legs, a common sight among polio victims then. And, the disease caused his mother to be overly cautious with him. “She taught me that the world can be a very scary place,” he said.

“I saw a lot of doctors. In 3rd grade, I had three surgeries; I was out of school for three months,” he added.

Nevertheless, as Mendelson grew older, he was determined that the disease, which had withered one of his legs, was not going to impede him in his interactions with schoolmates and friends. He also enthusiastically joined sports teams in high school, even though he had the handicap.

“I was too slow up and down the court, but I had a great shot,” he said of his joining the basketball team. He relates the story that on one occasion he beat a top champion high school basketball player 5-0 in the game of “Horse.”

“I was on the cross-country team. I came in last at every meet. They called me ‘canvas-back’ in wrestling,” he quips, displaying his subtle yet highly amusing sense of humor. The humor is often accompanied by a sly and warm smile that appears to emanate more from the eyes than the mouth.

Born and raised in the suburbs of St. Louis, Mo., Mendelson was the elder of two children. His father worked for the family company, an office supply business founded by his grandfather, part of a family of Russian Jews who had immigrated to the United States through Ellis Island in the late 1800s.

Mendelson left St. Louis to attend college at the University of Missouri in Columbia, where he earned a bachelor’s degree in sociology.

After graduation, he went on his own version of walkabout, traveling to Europe, a backpack as his luggage. During that time, he also spent three months on a kibbutz in Israel, which are communal communities centered around agricultural activities.

Back in the United States, he and his friends formed a summer camp for children in the Ozarks of Missouri. It was through a friend there that he learned of Antioch Graduate School of Education in Keene (now Antioch University New England). He applied and was accepted.

In 1974, he first arrived in the area, settling in Harrisville.

What was his first impression of New Hampshire? “There were a lot of trees,” he said, again with the smile.

“I remember my first day here. I attended Old Home Day in Nelson and went to a contra dance. I felt like I was in a National Geographic Magazine. Men on one side of the room, women on another. I looked across and saw a woman I recognized — we’d gone to high school together in St. Louis. She was visiting friends in Boston.”

He says he instantly fell in love with the Monadnock Region.

“I had wanted to move to another part of the country and loved the sense of community and scale of things here,” he said.

Mendelson earned a master’s degree in education at Antioch and accepted a job offer from the Harrisville School as both a teacher and administrator, “for $5,000 a year,” he added.

In 1980, he thought about leaving New Hampshire. “I was cold. I was poor. My grandfather had died, and I was going to go back to St. Louis and go into my family’s business,” he said.

But he didn’t and has never regretted his decision to stay. “Instead, I moved into the big city of Keene,” he said, where he worked for a decade as human services administrator at Monadnock Family Services.

Following Mendelson’s tenure there, he began in earnest to pursue photography, a subject for which he is still passionate. Five of his favorite black-and-white photographs hang in his office, including one of his father with his father’s identical twin. Both of his parents are now deceased.

In 1990, he joined the Keene office of VALIC, a financial consulting company. In 2002, he joined Edward Jones, where he still works out of an office on West Street in Keene. Its home office is located, coincidentally, in his hometown of St. Louis.

“I love Keene. You can build relationships here; the scale of the town is just so accessible. And there is great economic diversity,” he says.

Mendelson has been heavily involved in the community for years. He is president of the board of directors of Home Healthcare, Hospice and Community Services in Keene, which serves a significant swath of territory in Southwestern New Hampshire. He’s been a past president of the Monadnock United Way and at the Greater Keene Chamber of Commerce. He has served on the boards of Cedarcrest Center for Children with Disabilities in Keene and an organization entitled Bach with Verse. Richard “Dobbs” Hartshorne of Nelson formed the organization, which offers musical performances around the world for prisoners, soldiers, residents of refugee camps and other groups that are termed “non-traditional” audiences. Mendelson is also a well-known and regarded member of the Keene Elm City Rotary Club.

“I have such high regard for Allen that, in fact, they’re listed as guardians for our children,” said David Therrien, a longtime friend who also serves on boards with Mendelson, referring to Allen and his wife, Ellen. “I don’t know if there’s a greater compliment you can give someone. He is such a positive guy, and always a pleasure to interact with.”

Mendelson and his wife met in 1992, when she was working part-time in a women’s clothing store in downtown Brattleboro. A mutual friend thought they should meet.

“I walked up and down the street in Brattleboro, past the store, to see if I could get a look at her, to see what she looked like. I went in and said, ‘I’m Allen.’ “

When asked what happened next, he said, “She broke out in a rash,” delivering the line deadpan, with excellent comedic timing. He then proudly pulls out a small wallet-sized photo of the two at the time. They were married in 1995, and she is a social worker at Winchester Elementary School.

Mendelson’s tinkering with the notion of retiring from his career in financial consulting, which is ironic because much of his work deals with counseling clients in their financial matters as they face their sunset years. He admits his work dovetails nicely with his personality and proclivities.

“I have an interest in people, I remember virtually everything a person tells me, I remember the intricacies of people,” he says. “Some are ill prepared for retirement, I spend most of my time helping people think about their future.”

He is contemplating his own future and intends to maintain a heavy load of activity with nonprofit organizations. He’s also toying with a project he calls “Legacy Interviews,” where he would interview people, on film, about their life stories.

“I’ve done well, but my empathy and sympathies are with people in need. I consider myself lucky. Life is about character and trust. My mother planted that seed in me. She told me to obey signs. I do not cut corners.”

At a glance: Allen Mendelson