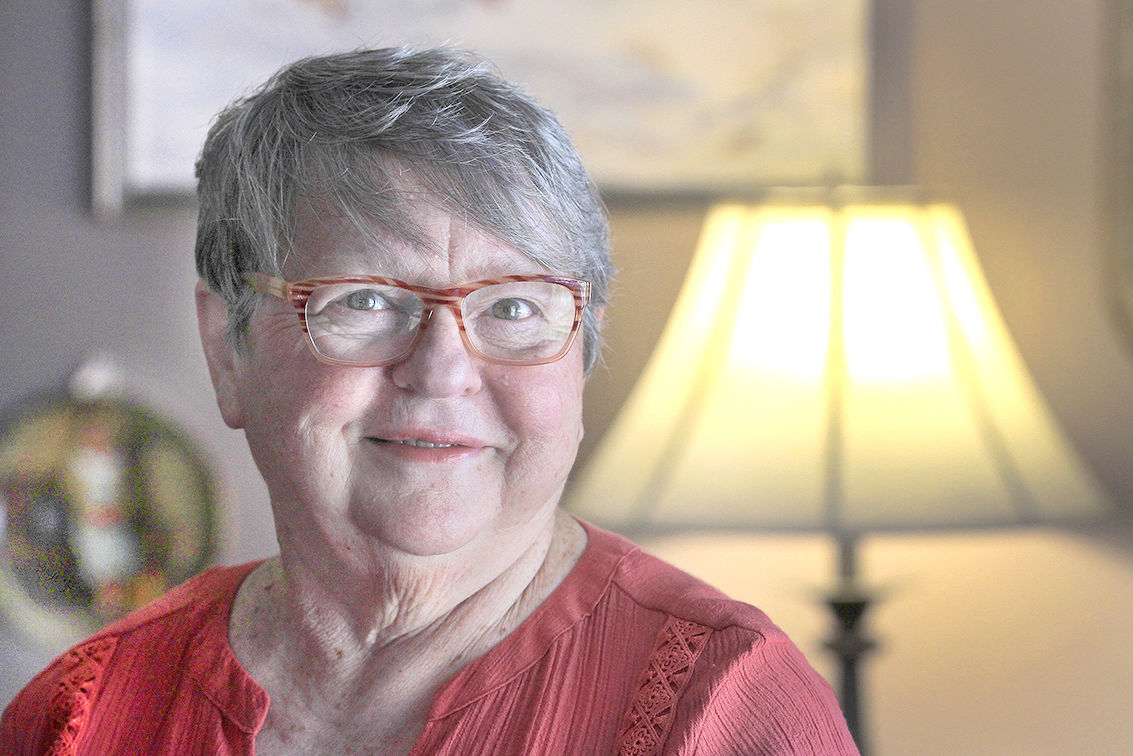 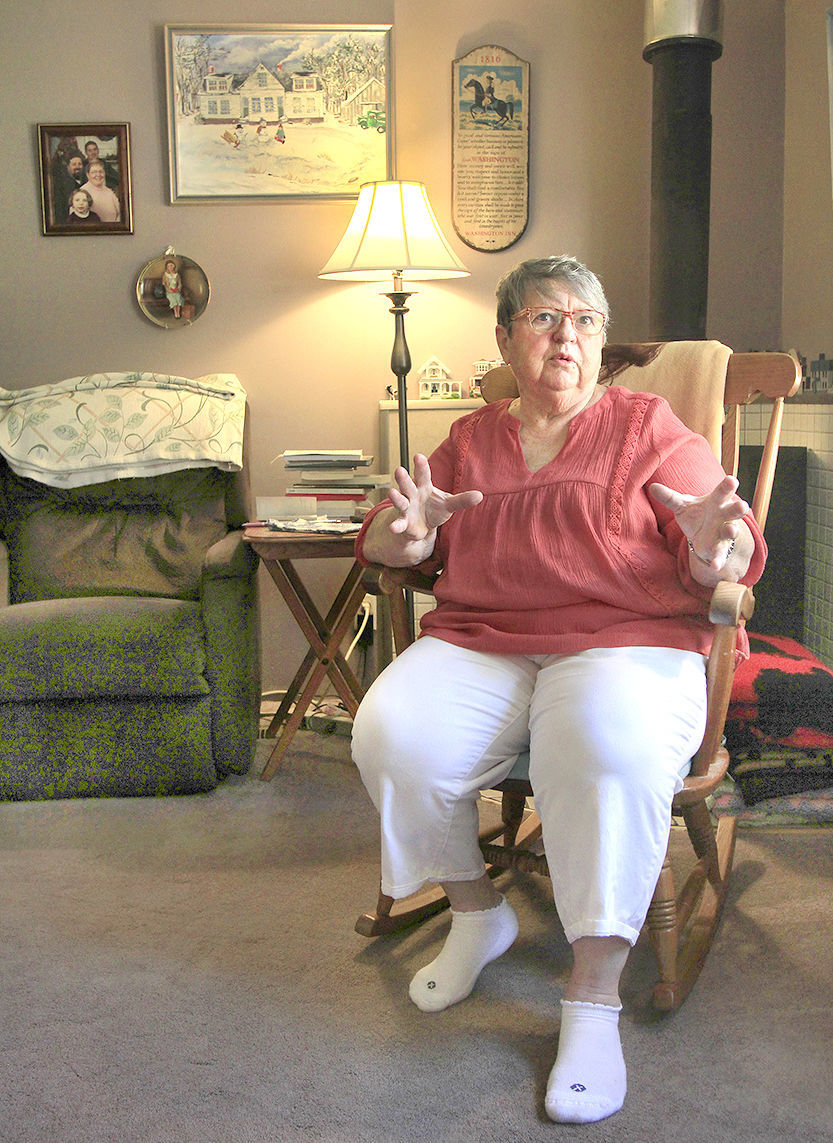 Bonnie Martino, shown here in her West Swanzey home Wednesday, talks about her near-death experience. Decades later, Martino is trying to form a group in the area for people who have undergone similar experiences.

Bonnie Martino, shown here in her West Swanzey home Wednesday, talks about her near-death experience. Decades later, Martino is trying to form a group in the area for people who have undergone similar experiences.

SWANZEY — Bonnie Martino sits in a comfortable chair in the living room of her home in a quiet subdivision here, speaking in a calm, conversational tone. But she is relating events that are, in unfolding stages, amazing, wondrous, inspirational and thought-provoking.

Martino, 71, says she went on a trip years ago. To heaven. And she came back. Her life was never the same.

One morning, when Martino was in her 20s and living in Keene, she awakened feeling nauseated and feverish. She’d gone to bed the night before feeling fine, but that wasn’t the case as the next morning progressed. She was getting horribly sick, and realized her condition was worsening.

Her husband was gone, and she had charge of her two young children, Matthew, who was 4, and Heather, 2.

“I thought it was the flu and was worried I’d pass out. I couldn’t do that with two little ones there,” she says.

“I called for my son. I told him, ‘Matthew, open the door, listen to Mommy.’ I told him which buttons to press on the phone, to call my parents to tell them Mommy’s sick and needs help.”

Within about 15 minutes, her parents and sister arrived, finding Martino in the bathroom. While her parents stayed back to care for the children, her sister Pennie drove her to the hospital.

“It was the old hospital here in Keene, the one on Main Street, Elliot Hospital. We waited in the emergency room, but it was very busy; they were treating some people who had been in a bad accident.”

As they waited, Martino began feeling slightly better. But it wasn’t long before she started to feel even worse than before.

“I had a sinking feeling and told my sister, ‘I’m going down,’ and then I passed out. The next thing I knew, I was on a gurney. Dr. Schofield was slapping the side of my face, attempting to revive me, asking me if I knew my name. It was noisy, there was a lot of commotion. I remember he was wearing a green cap.”

Dr. Charles Schofield and Martino knew one another, as he’d treated her before as a patient.

Although Martino didn’t know it then, after she’d passed out, Schofield had rushed to the emergency room from where he had been performing surgery throughout the night on the accident victims.

She recalls Schofield asking her what she ate prior to her illness, as he suspected it may be food poisoning. She’d eaten at a local delicatessen the day before.

She was given a dose of antibiotics.

Despite the drugs, her vital signs soon began a dangerous deterioration. “I heard the nurse say to someone that my temperature was 94 degrees and going down. The last words I recall were, ‘Stay with us.’ ”

Then began her journey.

“I woke up in a beautiful place,” she says. “There was a white light. I had the feeling of childlike happiness and contentment. It seemed to be an infinite space, and there were shapes that looked like people, and they were surrounded by light. Off to the right was some sort of platform, and Jesus was sitting on it. Children were with him. I went to him and nestled next to him.”

Then she says the scene changed, and she was back at the place where she had first entered when she saw the light. “There was an energy next to me, but it had no human features. It showed me my funeral. It was a dark day, and people were sitting on these folding chairs around my grave site. I saw my two children, and they were screaming and crying, and that tore my heart apart. I started to flail my arms, struggling to get to my kids, but something was holding me back; it was my guardian angel holding me back.”

During this entire episode, Martino describes that she was being infused with “an onslaught of information about truth.”

Then, she says, she felt a hand on her shoulder and heard a voice say, “This isn’t your time.”

She immediately felt a slap on her face and heard a nurse yell, “You’re back! You’re going to make it!”

“I chose to come back,” Martino says.

She doesn’t recall anything else until she awakened about 11 that night in a hospital bed. “Dr. Schofield was asleep in a chair next to my bed. I remember the nurses kept checking on me every 15 minutes. In the morning, I awakened the doctor; he’d stayed in the room with me throughout the night.”

She related to Schofield her experience.

“He told me that he’d heard of that happening to people,” she says.

Parenthetically, Dr. Schofield, who practiced medicine in Keene for nearly five decades, died on Aug. 30, 2017. In a lengthy feature story published in The Sentinel shortly after his death, patients, friends and colleagues sang his praises as both a highly talented and caring physician, as well as a deeply spiritual man.

Martino adds that during the second night in the hospital, she had a dream. “Jesus came to me and said, ‘Come walk with me,’ but I wouldn’t do it. I wouldn’t do it because I was terrified that I would then die in my sleep.”

Martino says it was suspected that she had suffered from a severe form of salmonella, a type of bacteria that causes an infection of the gastrointestinal tract. Although most people recover from it, it can spread to other parts of the body, cause serious illness and can even be fatal. The Centers for Disease Control and Prevention estimates that it results in about 23,000 hospitalizations per year in the United States and causes about 450 deaths.

Following this experience, Martino says nothing would ever be the same for her.

“If it happens to you, you believe. That’s part of the gift,” she explains.

However, she met resistance when retelling others of her journey.

“I tried to talk to people about it, but nobody believed it. My husband didn’t, my mother didn’t; she said this is not the kind of thing to tell anyone about, that they’ll think you’re nuts.”

Her life continued, her marriage an unhappy one that eventually ended in divorce. “I stuck with it for 17 years.” She eventually remarried in 1988 to her current husband, David Martino.

“God designed my husband specially for me,” she says.

Martino, who is retired, has become what she terms a “Christian spiritualist,” not attached to any organized denomination, but with deep religious feelings and a rock-solid confidence in the afterlife.

“I’m not afraid of death,” she says. “The biggest insult you can make to God is to not keep the door open so that when He speaks with you, you’ll not hear Him. I was born believing in God, and I never felt alone; I have always felt God’s presence.”

After her near-death experience, events began to happen to her that could not be explained rationally. For example, one night she was awakened with a message from her sister, as clear as if the woman were talking to her, Martino says, her sister telling her that she was dying and needed her help immediately. Her sister was suffering from cancer.

“I told my husband, ‘I have to go to the hospital right away,’ ” she says.

She raced to the hospital so fast a cop pursued her with lights flashing. “When I got to the hospital, he got out of his car and said, ‘You better be either a nurse or a doctor,’ and I told him my sister was dying. He held his hands up and got right back in his car.”

She found her sister in that room, she says. “Only her eyes moved, and there were tears running down her face. I asked if the doctor had upped her dose of morphine, and she said yes. I asked her if she’d requested that, and she said no.”

Martino demanded that the doctor be contacted and her sister be revived. That was done.

The next day, she says, her sister told her, “You heard me. I needed you.” Her sister survived for a couple more months, dying at age 46. “She wasn’t ready to go.”

Martino doesn’t fault the doctor. “I understand what they do,” she says. “They try to relieve the suffering and the pain.”

In another incident, Martino was working at a card shop in Keene, and a customer came in to purchase something for his wife. “I’d never seen this man before. He was wearing this cowboy hat, and when I touched him while giving his card back to him, I got an instant, vivid vision of being high on a mountaintop, looking over the land, so high I could see the curvature of the earth. The words ‘Wild Bill’ came to me.”

As the man was walking out the door, she asked to speak with him, and she described to him the vision that had appeared to her. He stopped dead in his tracks, she recalls, and told her that he was just passing through town and that his job entailed repairing aviation warning lights on radio towers located on mountaintops, and her vision described the views that he frequently saw while working.

“He told me that among his co-workers he was known as Wild Bill.”

She describes other such incidents in her life, which she considers evidence of her ability to receive images, messages and hints from others, both dead and alive. Martino believes that some people are able to act as mediums between the dead and the living, and she has performed such sessions with individuals. She notes, though, that she is not a soothsayer, fortune-teller or clairvoyant. Nor would she ever consider charging money for such a service.

Martino explains that ascertaining the legitimacy of those who act as mediums is in the amount of detail they can provide, specifics that no one except the other person involved would know. Those who may be frauds often deal only with vague generalities that can apply to any number of people.

“I’m convinced there are spirits around us, and you can communicate with them,” she says.

She’s in the process of trying to form a group in the area for those who have undergone near-death experiences, and has placed ads in The Sentinel and Monadnock Shopper News requesting people reach out to her. So far, the only responses she has received are from people wanting to know more about the phenomena, including those conducting research on the topic, and not from people who have actually experienced it.

In addition to being a field of study, these experiences are also the subject of fascination in popular culture, the topic of numerous books and websites involving both researchers and those who recount their specific stories. The most popular website is www.near-death.com, she says.

Martino regularly surveys the research being done on what are now commonly referred to as NDEs, and meets with people who share her interest in spiritualism. She’s in the process of writing a book about her experiences.

She also offers encouraging solace to anyone who might be suffering with these words: “I know God is all good, all compassionate.”

At a glance: Bonnie Martino