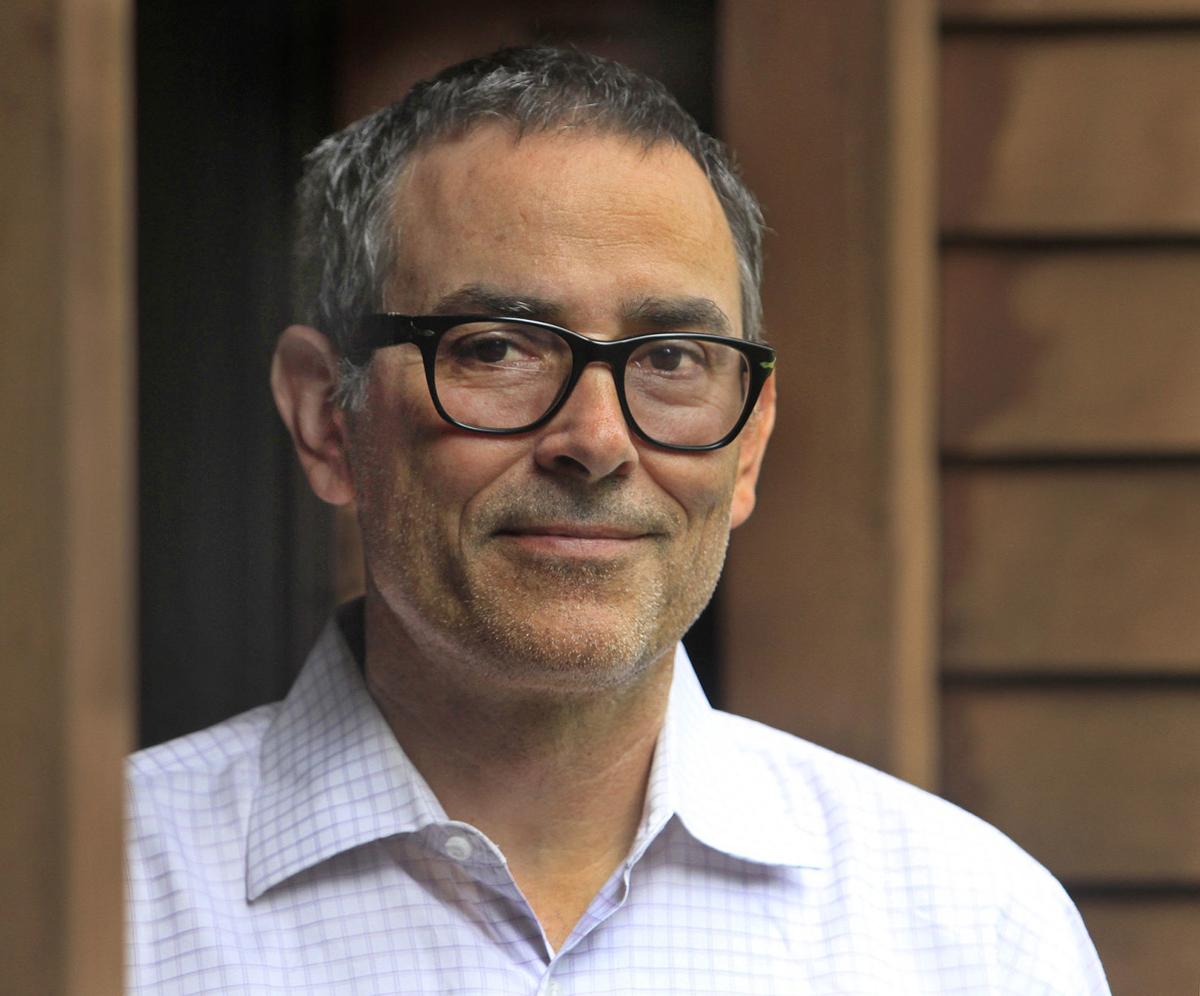 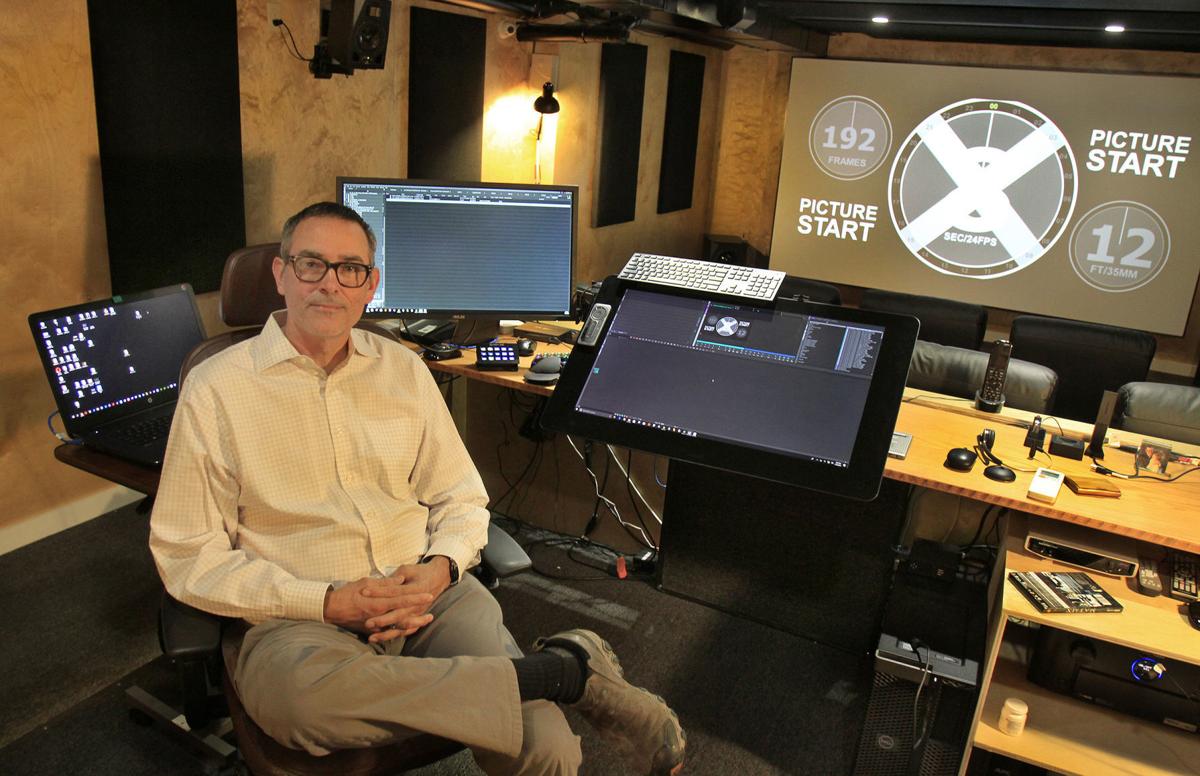 To make his move this year to Westmoreland work, Alan Edward Bell had to outfit a studio, complete with a viewing theater and high-tech editing equipment, so that he can work on films remotely from New Hampshire.

To make his move this year to Westmoreland work, Alan Edward Bell had to outfit a studio, complete with a viewing theater and high-tech editing equipment, so that he can work on films remotely from New Hampshire.

WESTMORELAND — Leading down the stairway of Alan Edward Bell’s home, a series of film posters lines the wall.

The titles are recognizable, from “(500) Days of Summer” to “The Hunger Games: Catching Fire.” But Bell is more than a fan — he’s a film editor, and this hallway of hits is his résumé.

The 56-year-old Los Angeles native’s career in the film industry stretches back about 30 years. But he only recently began working his movie magic in the Monadnock Region after he and his wife, Kristin, who grew up in Keene, moved to Westmoreland with their kids in April.

It was a move years in the making, Bell says, an idea first sparked when the couple married at Alyson’s Orchard in Walpole about 13 years ago.

“I wanted to move somewhere where my kids could run around outside, and there’s water, and I don’t have to worry about earthquakes, and there’s seasons,” explains Bell, whose father-in-law is former N.H. Senate president Thomas R. Eaton of Keene. “People don’t appreciate winter enough here, I’m finding.”

To make it work, he had to outfit his own studio here, complete with a viewing theater and high-tech editing equipment, so that he can work on films remotely from New Hampshire. The system can relay audio and video from his editing suite to studios in Los Angeles and elsewhere with just a one-second delay, he says.

Though he can’t legally divulge what he’s working on now — other than to say that it’s a “series of three films” — Bell is typically hired for major motion pictures, such as “The Amazing Spider-Man” and “Red Sparrow.”

But he didn’t originally set his sights on Hollywood. After getting his GED and leaving high school early at the age of 17, his focus was on rock climbing and not much else, he says.

“After about a year of guiding and working in a backpacking shop, I came to realize that if I stuck with climbing, I was going to be 40 years old one day and living out of my car. At that time, there was no real future for professional climbers,” Bell says. “And so, I decided I should really think about what I was going to do to make a living.”

He had a friend who was working as an assistant editor in the film industry, so he reached out to learn more. After a lunch with editor Robert Leighton and director Rob Reiner — who at the time was working on “The Princess Bride” — Bell was ready to jump in.

But they told him he’d need to spend time paying his dues, so at 22, he started out working for free on “low-budget B movies,” he says. He worked his way up the ladder, with assistant editing credits on films such as the 1980s cult classic “Heathers,” and developed a mentor-mentee relationship with Leighton that led to future work on several Reiner films.

He’s been in the field ever since.

A lot’s changed about the profession since then — namely that “cutting” footage no longer requires a sharp implement — and with the emergence of new technology, the limits of what’s possible in film editing have effectively fallen away, Bell says.

And when it comes to leaving his mark on the films he edits, he’s quick to note that the best work environment is a collaborative one.

“The way I look at it is, being an editor is a creative position, but it’s also a service position. So I’m trying to serve the director, the producer and the film,” he explains. “... In the best world, you’re kind of riffing off of each other. It’s almost like you’re musicians, and you’re jamming.”

As a freelance editor, Bell says he tends to pick which projects he’ll take on based on the director and subject material. Though there are many he’s enjoyed, one of his favorite projects was “Little Manhattan,” a tale of preteen first love in New York City that may be lesser known than some of his other credits.

“That movie has a lot of my style and is sort of playful. Very often when you’re editing, you’re not — editing is not a character in the movie. It should be invisible, you shouldn’t be aware of it,” he says. “... But in that film, it was very much, I was allowed to basically [say], ‘Hey, what if we did this, what if we did that?’ “

Within the industry, Bell is known as an “A-list editor,” according to Ryan Chavez, a Los Angeles-based visual effects editor who has worked with him as an assistant editor on several films since the two met around 15 years ago.

“He’s very honest, but he’s also very nurturing. When he sees people who are hungry for knowledge, he feeds into that,” Chavez says. “So in many ways, he’s a great mentor, and if you show that you are in fact interested in the things that he does or likes, he opens up and really shares his knowledge.”

Bell encouraged Chavez to begin learning how to do visual effects, a skill that at the time was not all that common for an assistant editor to have. But since then, it’s helped put Chavez on his current career trajectory.

Bell calls himself an “autodidact,” or one who is self-taught. And that philosophy shines through not only in his work, but in his hobbies, too.

Whenever Bell is in a new place — as he frequently has been when traveling around the world for work — he tries to read as much as he can about the history of the locale. And he didn’t waste any time before he began digging into the history of New England after moving here, he says, from the Seven-Year War to Revolutionary War figure John Stark.

“For me, location tends to be measured by the quality of the food and the amount of history I can study,” he says. “Which is one of the reasons why I love it here.”

But historical research is just one of his interests. Bell still rock climbs occasionally, he says, and has recently developed a penchant for mountain biking and joined the New England Mountain Biking Association.

Since high school, he’s also honed his skills in silversmithing, a craft he says he could see himself in if he hadn’t gone down the path to filmmaking. As a teen he used to sell his silver jewelry in Venice Beach while living in Los Angeles, and now he sells his creations — often done in a French style called “chasing and repoussé” — on the online artisans marketplace Etsy.

Whether in his profession or in his hobbies, Bell says things that come easily to him never hold his attention for long.

At a glance: Alan Edward Bell