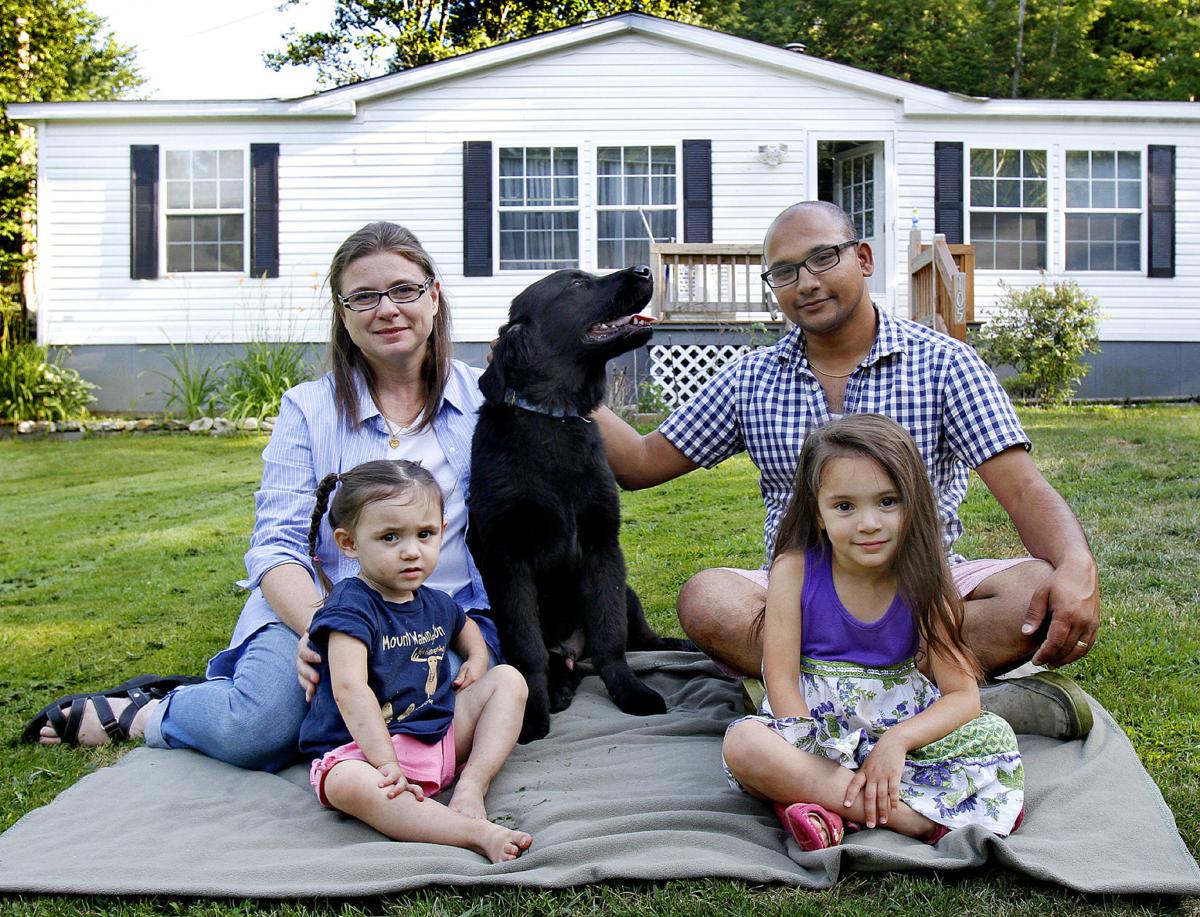 Chuda Mishra is seen with his family — wife, Jenna Carroll, daughters Sophia, 2, and Ruby Mishra, 4, and their dog, Kinkajou — outside their Richmond home on Thursday. 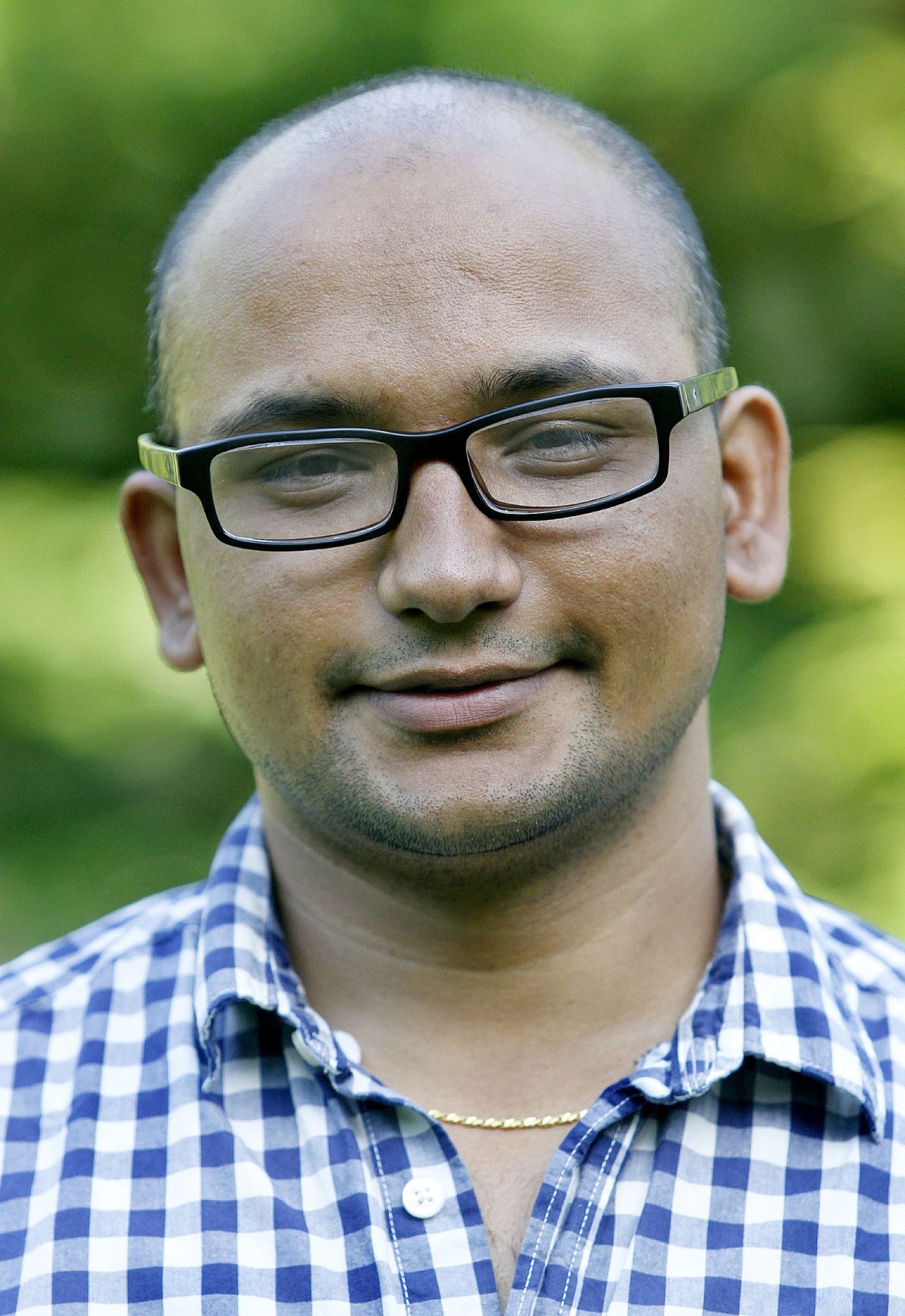 C huda Mishra has few memories of his life in Bhutan. Born in the South Asian country, he remembers drinking milk from the family’s pet cow and being surrounded by lots of land and animals. But when he was only 3 years old, the government forced the country’s ethnic Nepalese population to leave.

Like many others, his family moved to eastern Nepal, settling first on the banks of a river, but soon life there turned sour. Poor sanitation led to death, and the Bhutanese families were once again moved, this time to refugee camps. For Mishra’s family, Timai Camp became their new home.

Mishra spent about 18 years in Timai Camp, identifying it as his hometown.

Apart from the poverty in the camp, he looks back fondly on his upbringing; unlike his older family members, he was too young to comprehend the hardship of being expelled from his home and forced to live in another country.

“Everyday is picnic basically, thousands (of) people in a small village. It was good. I mean, at first it was difficult, (but) slowly people start getting used to that,” Mishra said. “We had a good education, good health and they used to give food and shelter ... so overall it wasn’t that bad.”

Organizations such as the United Nations High Commission for Refugees and the International Organization for Migration were involved with the camps, and when he was 21, Mishra and his family were resettled in the U.S.

Norway, Denmark, Australia and Canada were also on the list of countries welcoming people, but when it came down to it he said the U.S. was the best option.

Next they flew into Manchester with the ultimate destination being Laconia, where his father’s cousin had already been for eight months.

Having seen the United States only in movies, he was expecting tall buildings and lots of people bustling through the streets. But flying over southern New Hampshire in early winter he saw a very different image.

“We flew to Manchester and you can see from plane, ‘Oh my god, it all looks like dead (fields),’ ” Mishra said.

Acclimating to life as new Americans was tough.

Mishra said his family mostly stayed in their home when they first arrived; it took six months to feel somewhat adjusted.

“It was difficult; you don’t know what they expect from you. I started learning things slowly. First thing you gotta learn was right and wrong — what kind of stuff was OK to say to people,” Mishra said.

He recalled taking a walk early on, coming across a police officer and immediately panicking as he wondered whether they weren’t supposed to walk on the street.

“We’re so afraid to do anything so basically we stayed inside for awhile ... and then people start coming, a Nepalese family who were there already started talking and hanging out,” he said.

Mishra was grateful for the Bhutanese refugees who came to Laconia before him, noting that every couple of months when a new group of people moved to the area, it got easier to acclimate.

Bhagirath Khatiwada, program director for the Bhutanese Community of New Hampshire, said the not-for-profit organization was formed in 2009. He and other Bhutanese refugees who were among the first to resettle in the state realized the need in their community and the help they could provide.

“We felt that had there been an organization like us we would not have struggled so much in the beginning,” he said.

With more than 2,100 Bhutanese refugees in New Hampshire today, the organization offers a range of programs and services to new Americans, such as ESL classes, employment services, nutrition education, mental health assistance, and youth engagement and legal assistance.

Mishra’s family was also embraced by the broader community in Laconia as officials from different departments went home to home, explaining systems and how everything in the area worked. One of the volunteers helping new Americans get settled was Jenna Carroll, who later became Mishra’s wife.

In 2011, the couple moved to Connecticut for a fresh start, which presented Mishra with another new challenge, being in a community that didn’t know about his past experiences.

“In Laconia I didn’t have to deal with that because it’s a small community. Moving out of Laconia to Connecticut was different; you were (on) your own basically,” he said. “There is a small group of people who settled in Hartford, but if you go more in, they’ve never heard about us.”

Eventually, Mishra and Carroll were ready to head back to the Granite State. She took a job as director of education at the Historical Society of Cheshire County, and they’ve now lived in Richmond for two years.

Mishra was excited to be near some of his family again as well. His sister and one of his brothers live in Concord, and his parents live in Worcester, Mass.

“I miss them because I grew up in a big family. Now all I have is four people and a dog ... and we live in the woods, so it’s totally different.” he said. “But if I want to see them it’s like an hour drive, not bad.”

According to Carroll, Mishra’s dedication to family and friends, hard work and quest for a better life are some of his defining characteristics.

“Despite all of the frustration he has faced in life and continues to face today, he is a sensitive person and finds beauty in his surroundings,” she said in an email, noting his love for the White Mountains and yearly trek up Mount Washington.

Mishra — who works as a security officer at RiverMead Lifecare Community in Peterborough and drives a school bus — also enjoys taking care of his yard during his free time, growing flowers and vegetables and cooking a Nepalese meal for his family twice a week. His main hobby, however, is fixing cars, either his own or his friends’.

“I like to fix things, and that’s what I’ve been doing since I was little,” he said.

He hasn’t been back to Nepal since coming to the U.S., but someday he’d like to take Carroll and their children, to show them the place where he grew up and share his memories with his family.

In the meantime, Mishra feels more assured of his place within the community, having lived in New Hampshire for a number of years, and he doesn’t hide his past. He used to be uncomfortable with people knowing that he came from Timai Camp, worried that they would judge him based solely on the label “refugee.”

“Being out of the Bhutanese community for so long I don’t feel any difference I guess. We’re just people,” he said. “At first I wasn’t involved in anything. And now I start knowing people in the community, (get) a little bit involved. … I definitely feel like I’m part of this Monadnock Region.”

Sometimes he’ll get a call or email when a multicultural festival or event is held and he enjoys being involved. And a couple of months ago a group of students from Keene High School reached out to Mishra, asking him to tells his story for their project.

“I do get excited to share ... my past and present,” Mishra said. “It’s good to know different people and whatever happened in their lives.”