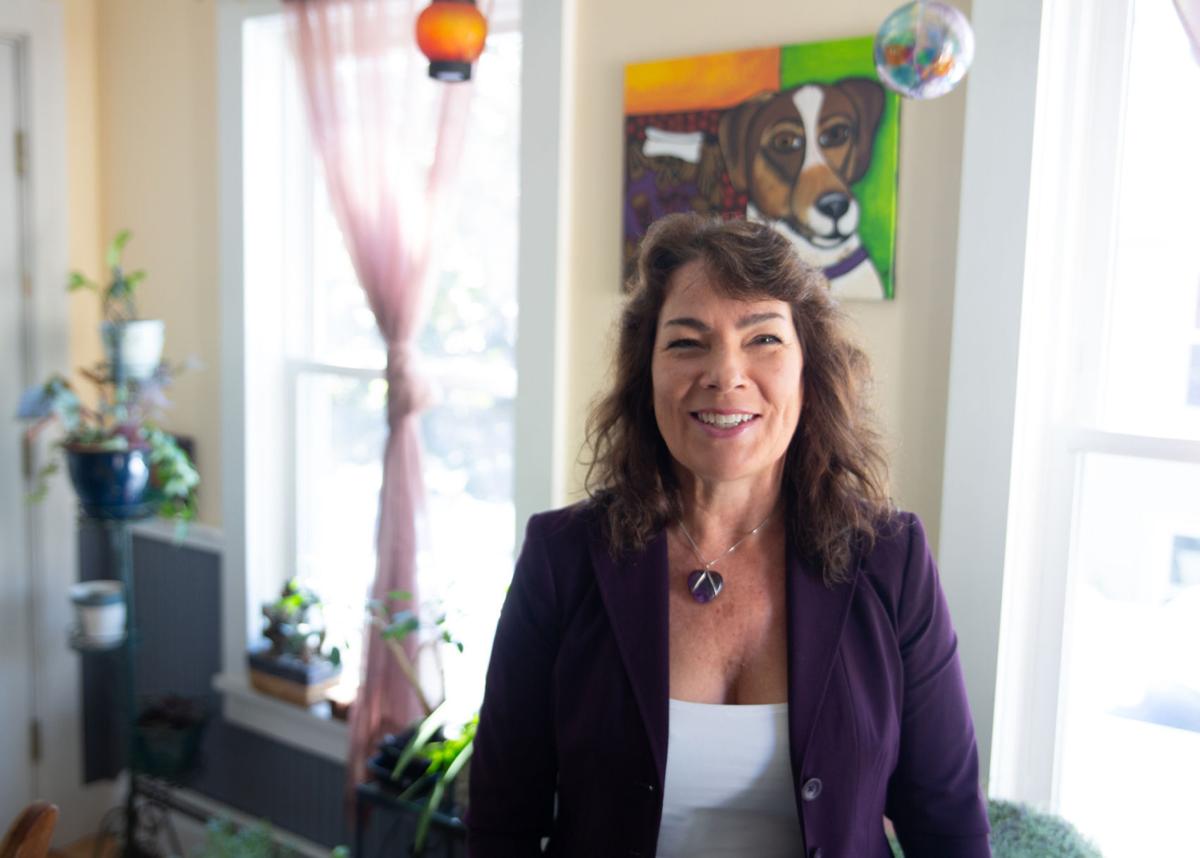 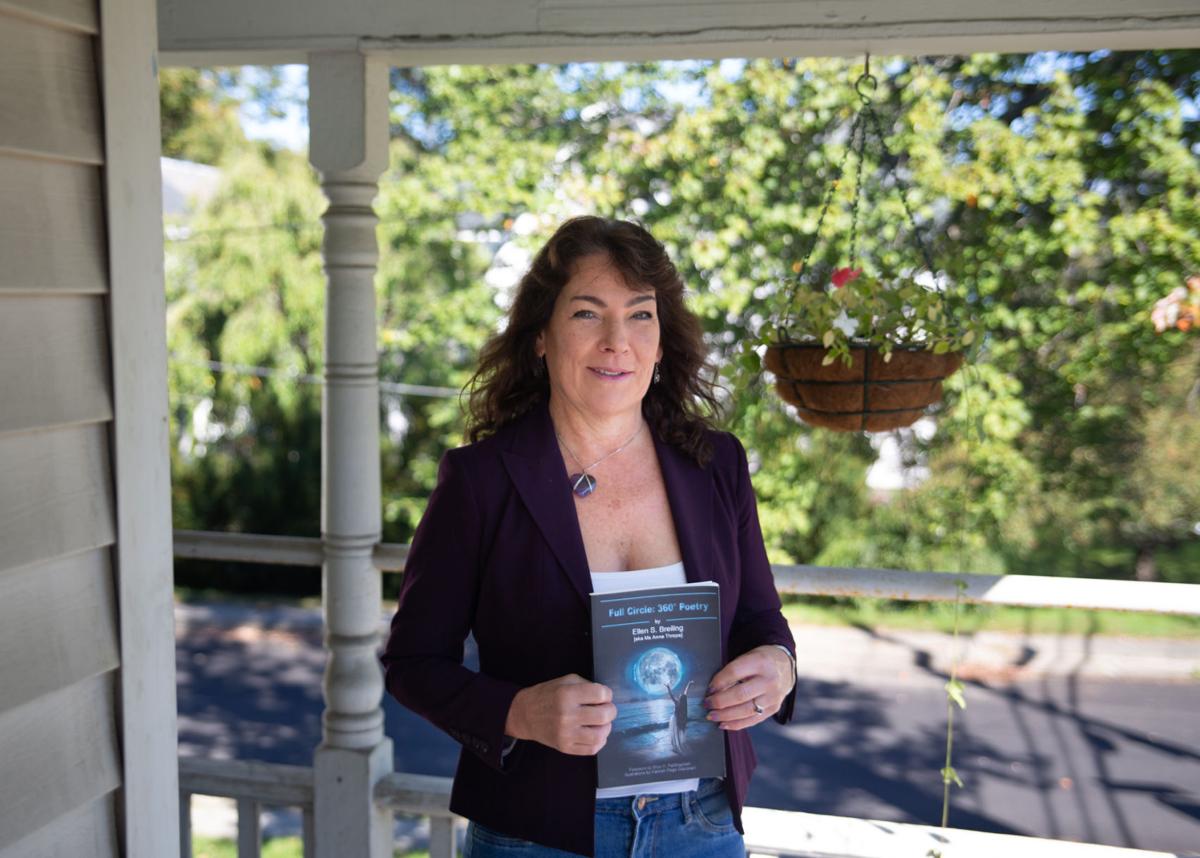 Ellen Breiling, shown at her apartment in Brattleboro on Friday, with her first solo poetry book, “Full Circle: 360º Poetry.”

Ellen Breiling, shown at her apartment in Brattleboro on Friday, with her first solo poetry book, “Full Circle: 360º Poetry.”

Ellen S. Breiling has thought of herself as a misanthropic person for a while now.

A variation of the word — which describes someone who distrusts humanity — is even on her license plate, and it serves as her pen-name: Ms. Anne Thrope.

“I think the day that Ms. Anne Thrope was born was the day that John Lennon was assassinated. Because I realized that if he could be assassinated, then anything in this world was possible,” says the Brattleboro resident, who lived in Nelson for several years. “… I’ve just always had it in my heart that people can be atrocious.”

That’s why she’s often preferred solitude. But about seven years ago, she decided to join Facebook, and found something unexpected: a welcoming, global writing community she could connect to without even leaving home.

Since her first foray into the online literary world, Breiling has built up a personal poetry blog, become an administrator for two international poetry forums, contributed to several anthologies and even published her own solo collection, “Full Circle: 360° Poetry.”

And in both 2020 and 2021, she received an award for her work from the Government of Gujarat and the Gujarat Sahitya Akademi in India in celebration of the country’s 74th Independence Day. The award is affiliated with one of the Facebook forums Breiling is involved in and recognizes literary excellence and efforts to create an inclusive global literary community.

Growing up in Clinton, Conn., Breiling loved writing both fiction and poetry in her free time, and she says her parents encouraged a love of language from a young age. But she didn’t always feel comfortable putting her words out into the world.

“I didn’t want to share my writing with anybody. So I destroyed everything I had ever written,” Breiling, 57, says. “I had like a 20-year hiatus where I didn’t write at all.”

She was actually on a path to becoming a veterinarian, having graduated with a degree in biology from Keene State College. As she started out in the field, though, she found it felt too focused on money. She considered going back to school for zoology, but decided instead to get her teacher certification, and briefly toyed with the idea of teaching high-school biology.

Breiling ended up working for a while as a canvasser for Greenpeace, and then as a cleaner. After retiring, some of her friends, several of whom lived overseas, started pestering her to get on Facebook.

“It ended up being a perfect platform for me because I was living pretty much as a recluse. I could pick and choose who I wanted to interact with and share my photography,” she says. “So when I started writing poetry again, I just took the leap and decided to be brave and share it.”

Social media has become a prominent venue for poetry in recent years, with “Instagram poets” such as Rupi Kaur using Tumblr, Twitter, Facebook and other channels to build an audience and promote their work. For some, it’s even led to major publishing deals.

When she decided to try social media, Breiling was looking for a safe place to share. But many of the poetry groups she first stumbled into were cutthroat rather than compassionate.

“Some of them were just horrible, ruthless places where people completely bash each other. For me, I consider poetry to be extremely personal,” she says. “And I don’t think it’s meant to be critiqued.”

That’s why she was happy to find Motivational Strips, a poetry forum on Facebook where negative comments are not allowed. The group has more than 20,000 members and an average of 200 posts per day, with participants hailing from around the world and many of them writing in a language that is not their first. Breiling is now a regional director for the group for the United States and Canada, as well as an approving editor for its web publication, Bharath Vision.

She’s also contributed to poetry anthologies, including “Insight” and “Dreamer,” and co-authored a collection called “Chasing Zephyrs.” She published her first solo collection through a small publishing house owned by a fellow writer from her online network, and is hoping to release a hardback version of that book sometime in the future. But if she were to publish more books, Breiling says she’d probably handle it herself, because the publishing industry can be brutal.

“I think, honestly, that it’s going to be the way of the future, self-publishing,” Breiling says. “… Most of the people that I know prefer to handle it on their own — that way they’re in control, they don’t have to give up the rights to their work.”

Sophie Souza, who lives in Washington and met Breiling when they were both working at a factory in the ’80s, says despite the poet’s thoughts on humanity, she’s someone who’s always ready to help her friends. And that shines through in her commitment to the online poetry community.

“Through this whole COVID thing, which was a tough year, I have seen that her poetry and her presence made a difference for people on the site,” Souza says.

Breiling’s poetry makes a big impact on her offline friends, too, Souza says, noting that she seems to have the ability to turn any passing thought or experience into a written work. Once, Souza recounted a dream she’d had to Breiling, and before long, her friend had turned it into a poem.

This sort of thing isn’t an uncommon occurrence.

“There was this gravestone I’d seen that had a name I thought was interesting on it. I told her about that and she wrote a poem, and it was really great,” Souza says. “It’s almost like having your own poet on demand.”

Breiling says she can draw inspiration from “whatever strikes her fancy,” including her scientific background, evoking themes around nature, loss and love. And she has no plans to stop writing anytime soon.

“Love and grief is a huge treasure trove,” she says.

At a glance: Ellen S. Breiling