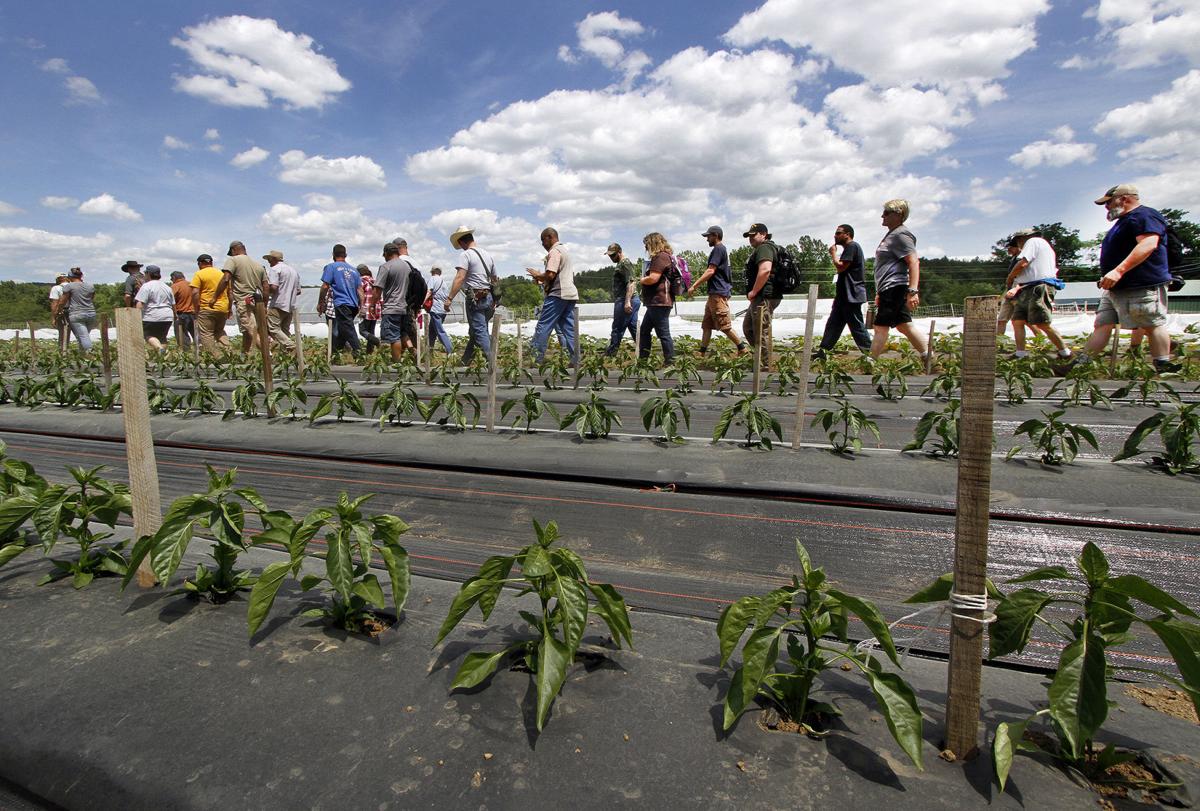 Veterans participate in the Armed to Farm tour at Green Wagon Farm in Keene Tuesday. 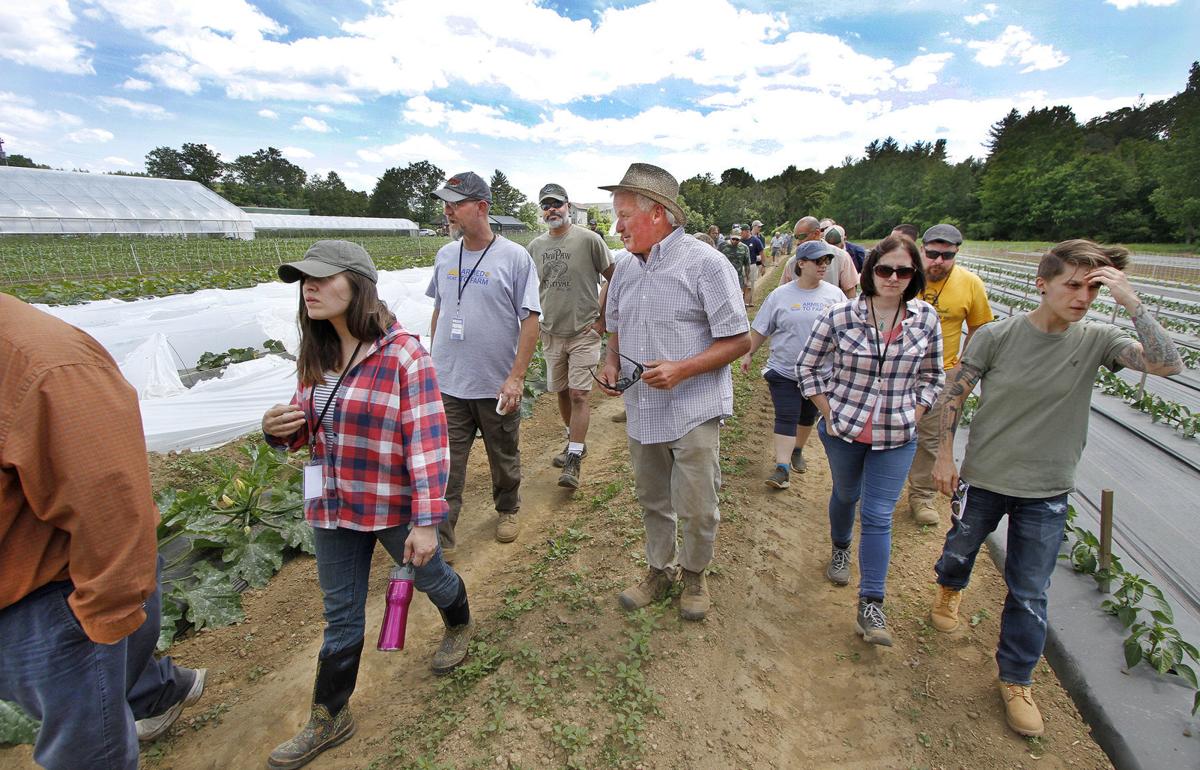 Bill Jarrell, center, and his daughter Kaisa, not shown, gave a tour of their Green Wagon Farm in Keene Tuesday to participants in the Armed to Farm program.

Veterans participate in the Armed to Farm tour at Green Wagon Farm in Keene Tuesday.

Bill Jarrell, center, and his daughter Kaisa, not shown, gave a tour of their Green Wagon Farm in Keene Tuesday to participants in the Armed to Farm program.

TROY — If you want to put up 400 yards of woven-wire fencing in a hurry, you could do a lot worse than enlisting the help of 29 military veterans.

Working at East Hill Farm Monday, these men and women had an old, beat-up fence out of the ground in a matter of minutes, raking up dead leaves and tearing out rusty wire and old posts with a quick, determined efficiency.

Moments later they were cutting new wood posts to size with a chainsaw and digging holes with a gas-powered auger, cracking jokes and swapping stories over the deafening noise of machinery.

These retired service members are participants in Armed to Farm, a national initiative that provides training in sustainable agriculture to military veterans free of charge.

Lisa Montgomery of Milford, Maine, an Air Force veteran who served for four years, doesn’t have a background in farming. But she said she’s eager to learn.

Armed to Farm, which is being held this week at The Inn at East Hill Farm, is hosted by the National Center for Appropriate Technology, a Montana-based nonprofit organization that focuses on sustainability and natural resource protection.

According to Northeast Regional Office Director Andy Pressman, this week’s New Hampshire training includes 29 military veterans, most of whom served in Afghanistan and Iraq. About half live in New Hampshire, while the rest hail from all over the Northeast, from Pennsylvania to Maine.

“Our goal is to help them successfully transition out of the military and into agriculture,” Pressman said. “These veterans know how to set goals and achieve them.”

Those classroom sessions typically cover the myriad aspects of running a modern farm, from budgeting and record keeping to livestock and vegetable production.

This week marks the first time the initiative has come to New Hampshire. The schedule included visits to several local operations, including Green Wagon Farm in Keene and the New Hampshire Honey Bee in Gilsum.

The application for the program was open to military veterans of any age who are interested in starting a farm or have been farming fewer than 10 years.

Chris Boles, a 20-year Marine Corps veteran who lives in Newport, started raising ducks and chickens about two months ago. He said he found out about the training on Facebook and applied at the last minute.

Boles was raised in Londonderry, where his father maintained a large vegetable garden. Growing up, he said, he sold the produce from that garden in a small farm stand at the end of the driveway.

Now Boles wants to buy some land of his own and expand his fledgling poultry operation to include goats or pigs. He said he has been inspired by the other veterans attending the training — that they’re “planting seeds” in his head.

“This is an awesome way to network,” Boles said. “Listening to the other veterans here, I hear that military mindset. They have goals; they pursue those goals. There’s something to be said about that.”

Boles also emphasized the therapeutic aspect of farming, noting that there’s something soothing about getting one’s hands dirty and watching something grow.

A sense of camaraderie was a common theme among participants during a training session Monday.

“Regardless of what branch we served in, there’s a shared experience that tends to make us a relatively instant community,” Meg Young of New Durham said.

Young, a self-described “military brat,” was born at the former Pease Air Force Base in Rockingham County. She served six years in the Air Force before retiring and moving with her husband to New Durham in 2013.

Young and her husband own a small homestead farm on the side of Copple Crown Mountain, where they raise heritage-breed chickens and ducks, many of them on The Livestock Conservancy’s endangered list.

Young said she delights in introducing people to the nuances of these different breeds and expanding their palates with unique flavors.

“You actually taste the difference,” she said, contrasting her poultry with the chicken produced by large commercial operations. “It’s amazing. I love seeing people have their first taste of some of these flavors they’ve never experienced before. It’s extraordinarily gratifying.”

Several years ago, Young took a class on the anthropology of food. She said that experience helped spark an interest in permaculture, a term that describes sustainable and self-sufficient farming practices. Now, she and her husband are looking to expand their New Durham farm by fencing pasture and introducing more livestock, including goats and heritage-breed turkeys.

Young described Armed to Farm as a tremendous learning opportunity for her, and said she was particularly excited about a lecture on agroforesty — agriculture that combines the cultivation and conservation of trees. Her property in New Durham includes 13 wooded acres.

“I’m really interested in learning more about that — how I can best serve my flocks and my land at the same time,” Young said. “We’re interested in taking care of the land that takes care of us.”

Last year, the National Center for Appropriate Technology reached 105 participants with four Armed to Farm events, including one in Bangor, Maine. The New Hampshire session is one of four trainings being held this year, with other programs in California and Montana and a special urban farming initiative in Washington, D.C. Next year, Armed to Farm is coming to Vermont.

According to Armed to Farm Coordinator Robyn Metzger, who works at the center’s Southeast regional office in Fayetteville, Ark., the initiative began in 2010 as a series of three-day workshops in partnership with the Farmer Veteran Coalition, a nonprofit organization based in Davis, Calif. The first week-long Armed to Farm training was held in Fayetteville in 2013.

At the New Hampshire event, participants couldn’t be happier with the bucolic scenery in the foothills of Mount Monadnock.

Taking a short break from fence work, Boles leaned on his rake and paused to take in the clear blue sky and green, rolling pastures of East Hill Farm. “This is real beauty right here,” he said.