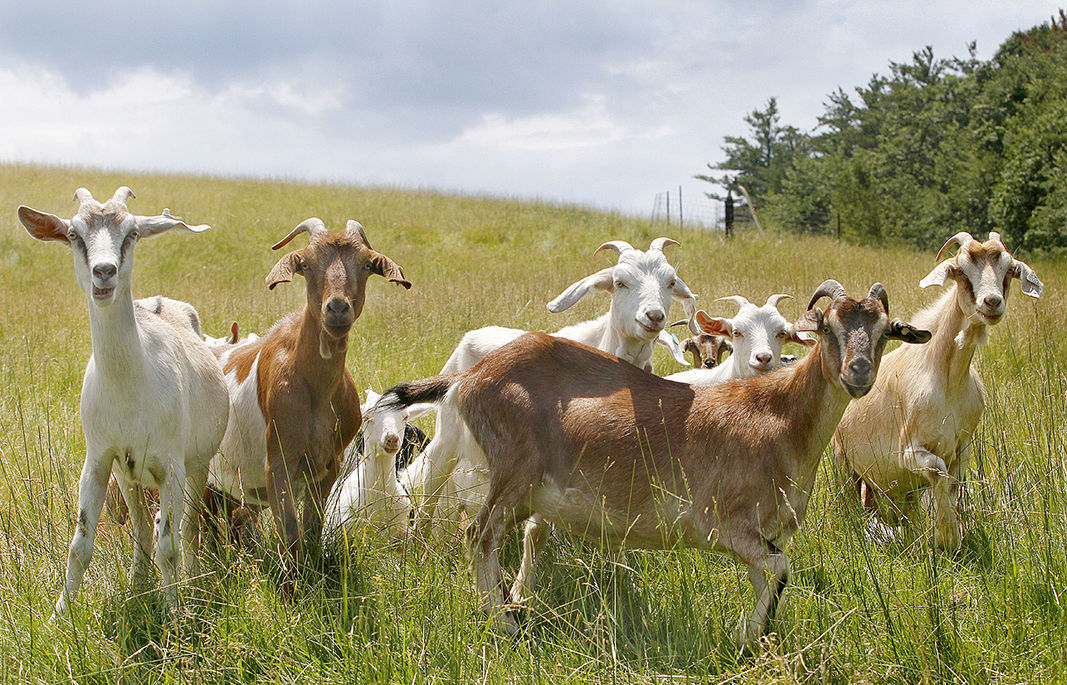 Goats are providing natural mowing at the closed section of the city landfill. The city is required by the state to control vegetation growth in that area, and has been doing that by keeping it mowed. 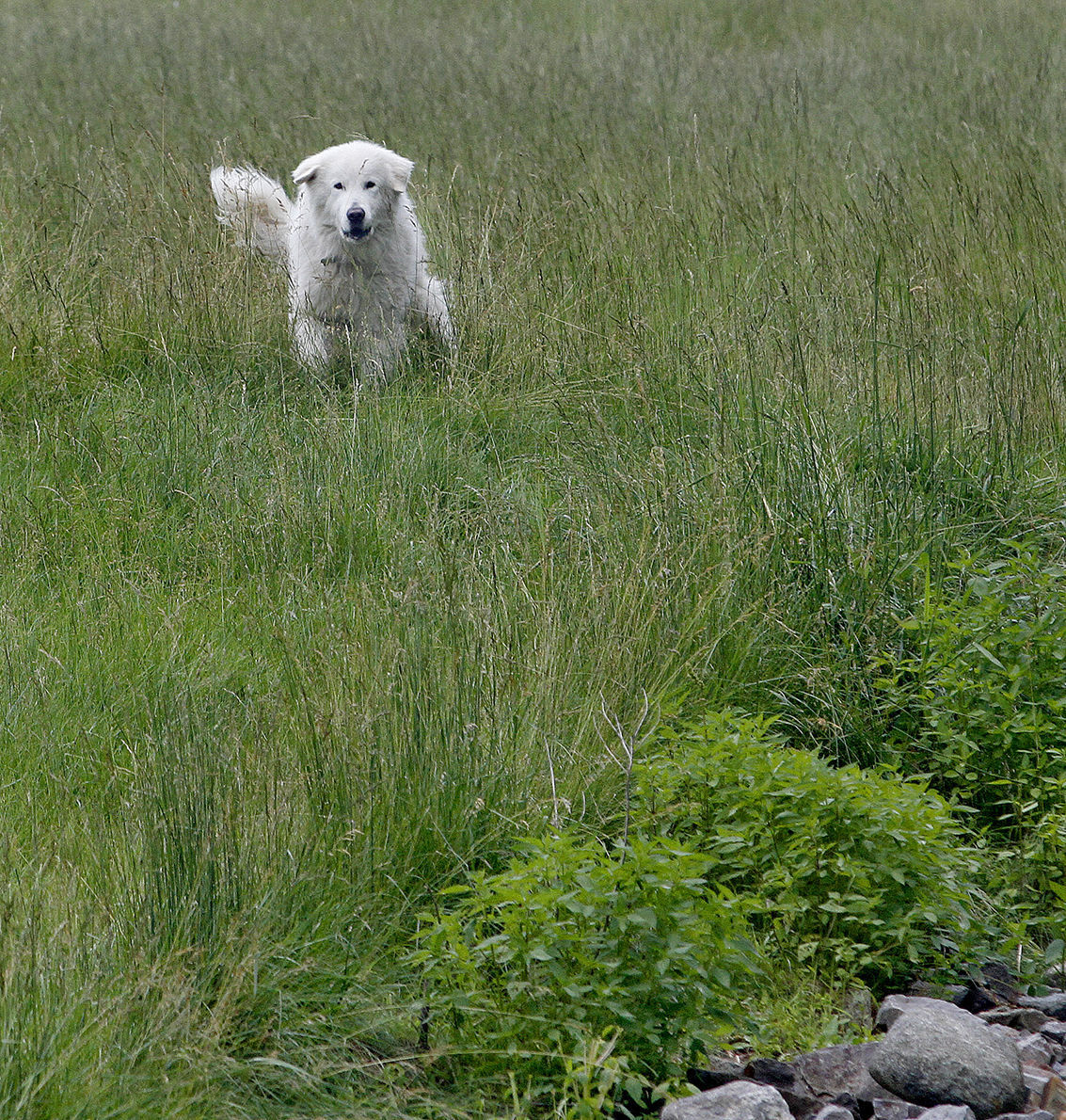 This Great Pyrenees, seen charging, is the official shepherd of the flock of goats that is grazing at Keene’s capped landfill this summer. According to dogtime.com, the Great Pyrenees dog breed’s goal in life is to protect sheep, goats, livestock, people, children, grass, flowers, the moon, the lawn furniture, bird feeders, and defend against any real or imaginary predators that may intrude on your personal space. And to give unconditional love. 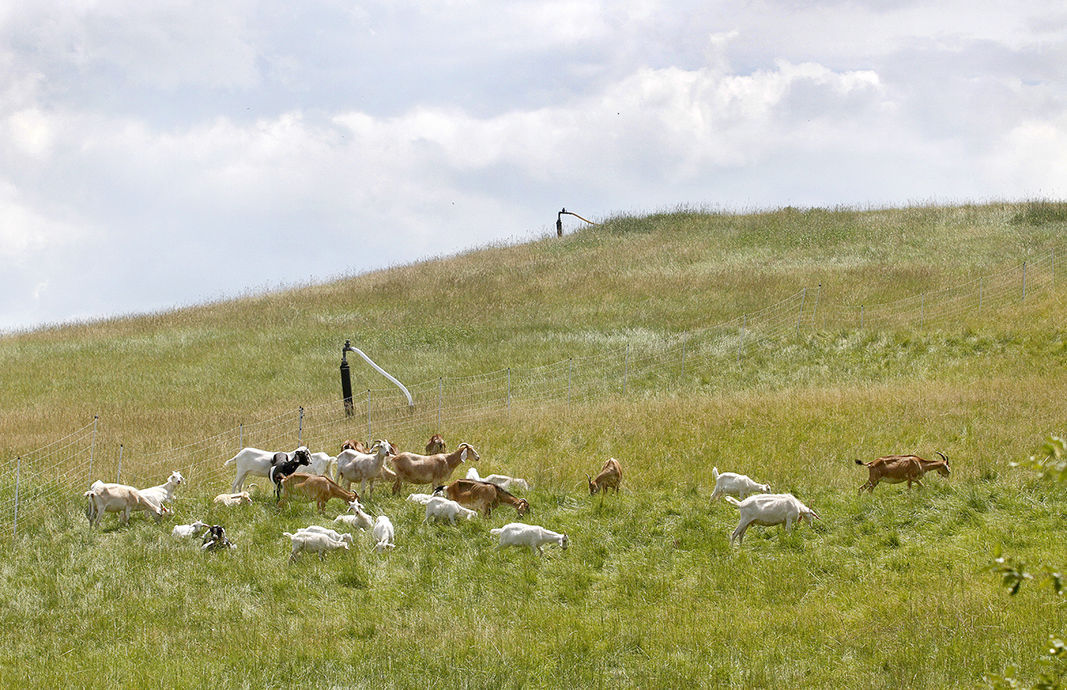 Goats are providing natural mowing at the closed section of the city landfill. The city is required by the state to control vegetation growth in that area, and has been doing that by keeping it mowed.

This Great Pyrenees, seen charging, is the official shepherd of the flock of goats that is grazing at Keene’s capped landfill this summer. According to dogtime.com, the Great Pyrenees dog breed’s goal in life is to protect sheep, goats, livestock, people, children, grass, flowers, the moon, the lawn furniture, bird feeders, and defend against any real or imaginary predators that may intrude on your personal space. And to give unconditional love.

At one time, many sheep roamed Keene’s closed landfill with the task of keeping the grass short and shrubbery in check.

The sheep weren’t owned by the city; rather, they were on loan from a local shepherd. Eventually, the program fizzled and the city turned to man-made equipment for the work.

But this summer, public works officials have gone back to the animal approach — this time with goats.

“The experience we had with a number of head of sheep back in the day was that they were basically able to take care of the landfill cap themselves,” Assistant Public Works Director Duncan Watson said. “With this experiment, we have considerably fewer goats on the landfill (than we had sheep).”

But the idea, he said, is the same.

The city is required by the state to control vegetation growth on the closed landfill, and has been doing that by keeping it mowed, he said.

The landfill is next to the transfer station and recycling center, which is off Route 12 on Old Summit Road.

The annual budget for mowing the landfill cap is about $6,000, Watson said; it costs the city $300 a month for the goats.

Watson said he came across an advertisement in a local publication earlier this year about goats being available to hire for brush control. The advertisement was placed by Natalie Reid, who owns Gap Mountain Goats in Marlborough with her husband, Russell.

“Going off the positive experience with the sheep, I can certainly see an opportunity with the goats,” Watson said.

One benefit of having the goats so far is, like the sheep, they leave a lighter carbon footprint on the landfill than lawn-mowing equipment, he said.

Goats and sheep don’t gnaw anything down beyond the plant or root system, he said. That helps keep the landfill cap protected from erosion, he said.

Mowing the cap with a machine can be dicey because it isn’t a flat surface, and it’s relatively easy to scalp areas of it, he said. When that happens, those areas need to be repaired, he said.

While grass predominantly grows on the landfill cap, other plants can take root, Watson said. Goats tend to go after those plants first before the grass, which is helpful in maintaining the site and keeping shrubbery and trees from taking root, he said.

The goats also fertilize the land as they go, which is a benefit to the richness of the grass and the environment, he said.

Reid said she and her husband have been hiring out their goats for brush control on area properties for six or seven years. The animals are particularly adept at clearing brush on rocky and steep areas where it would be difficult to get machinery to, she said.

“Goats have a reputation for eating everything,” she said, “that’s not true. They’re quite picky, and have a diverse pallet. They prefer trees and shrubs, and browse, but they do need grass in their diet, too.”

Brush clearing season for the goats typically starts on Memorial Day weekend in May and goes through the first hard freeze in the fall, she said.

She checks each property before sending the goats out to make sure there are no poisonous plants or other hazards, such as rusty nails or open wells, she said. She also uses that time to provide the property owner with a quote for the job, she said.

She added: “People enjoy having goats around. They’re quiet, and they’re a natural alternative to products we have a strong feeling about not using. They offer alternatives to chemicals, and that’s a big thing.”

The Reids own 80 goats, and most are of the Kiko breed, which is a meat goat from New Zealand. They also raise Nubian goats, which are a milking breed. They do cross-breed the animals, Natalie Reid said.

As of last week, 33 goats have been assigned to the Keene landfill job, which began in June, she said. She expects she will need to bring more up there, she said. The goats at the landfill are mostly females with their kids, and have water and shelter, she said.

A Great Pyrenees named Enzo is also with the herd at the landfill as its “goat dog,” according to a news release from the city.

The plan is to move the pen with the goats around the 20-acre landfill throughout the summer and into the fall, Reid said.

The goats will stay in an area for about three weeks managing the vegetation there, and are then moved to another section to do the same thing, she said.

“This is a large job and the terrain is a little bit difficult, so we’re trying to give the goats as much space as possible,” she said. “We’re still tweaking things.”

Watson said that so far having the goats at the landfill as a pilot program of sorts has been working out well. But he expects some mowing of the site will have to continue to supplement the animals’ efforts, he said.

“Right now, with the number of head in the herd, there is no way they can keep up with maintaining the entire landfill,” he said.

He expects the goats will remain at the landfill until the fall, and from there, there will have to be discussions with Reid about whether the initiative continues and what that would look like, he said.

There is also the economics and the environment to consider, he said.

City officials are always looking for alternative ways of going about things that are better than the processes already in place, he said.

“This is one way to get something done, and it kind of has a cool factor to it too,” he said.