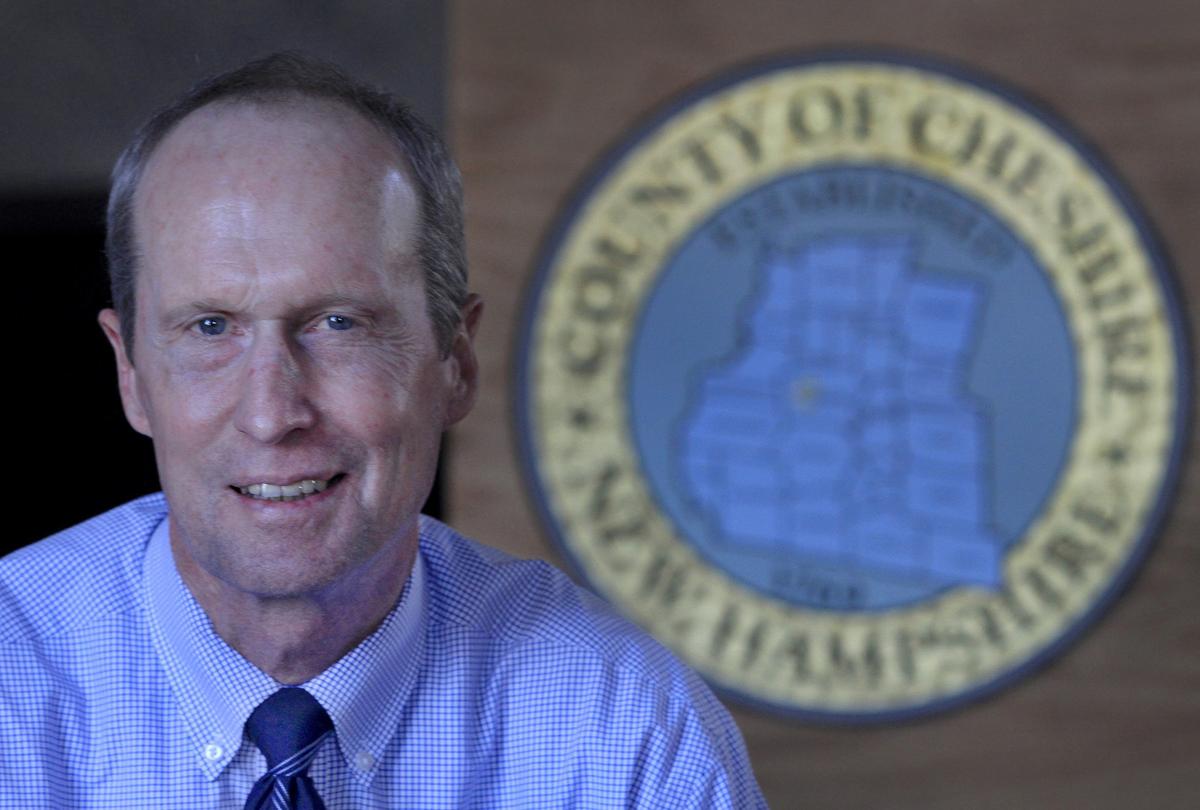 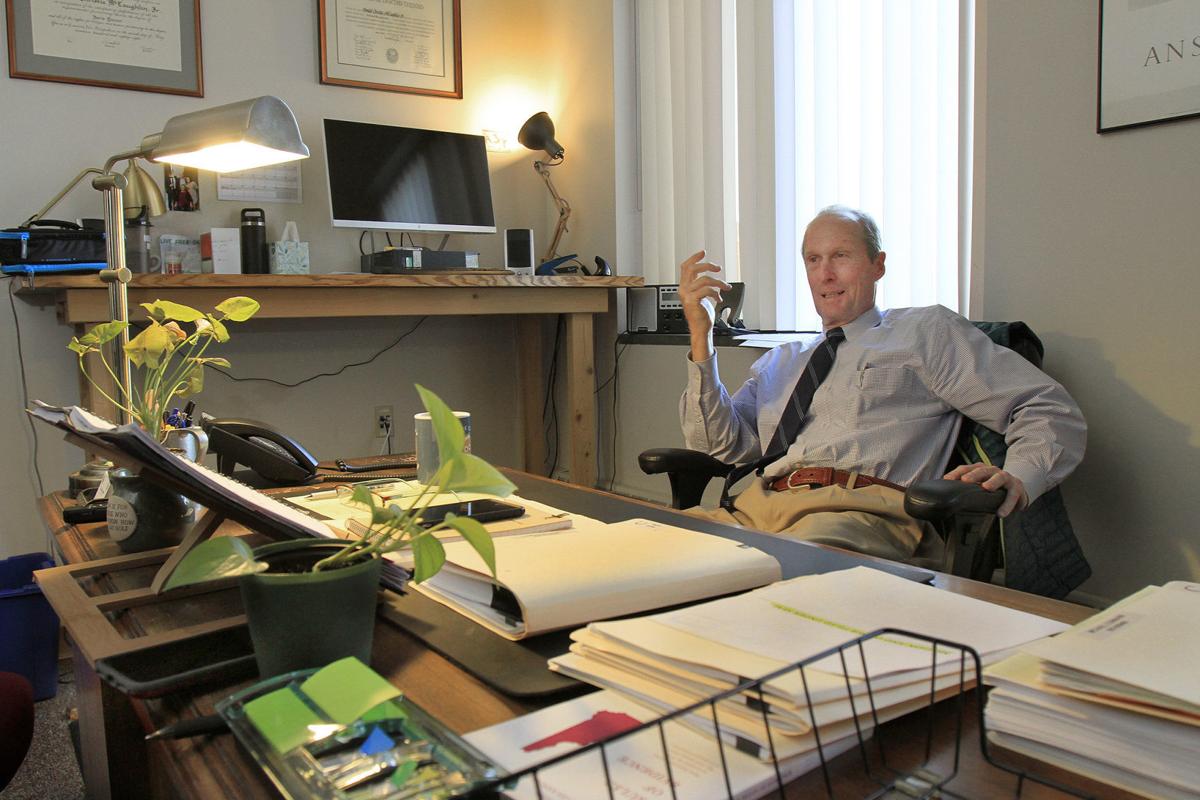 Cheshire County Attorney Chris McLaughlin in his office on the second floor of County Hall in Keene. 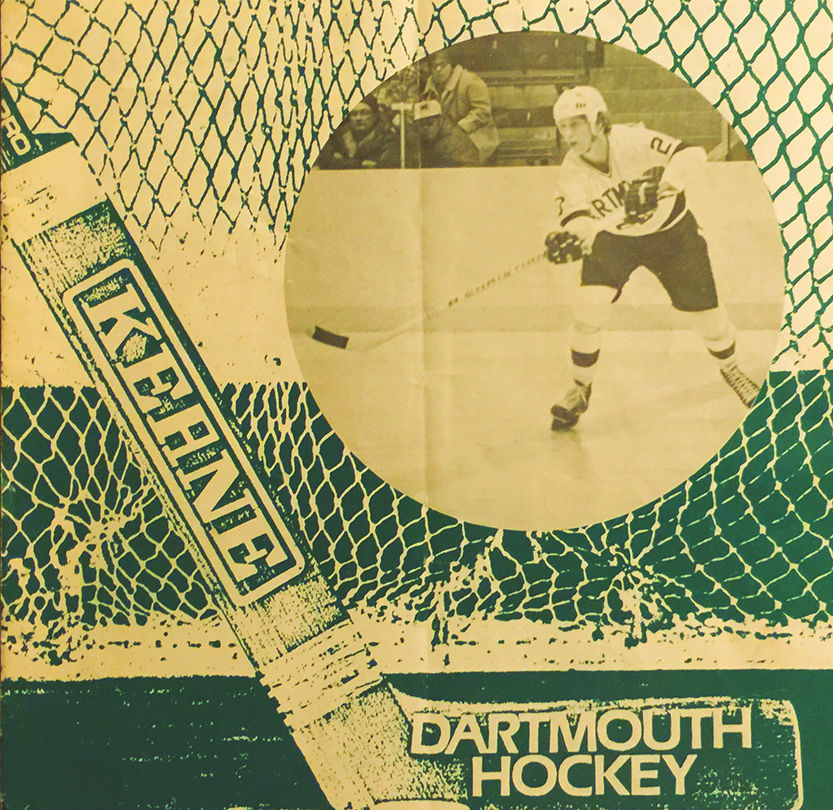 Chris McLaughlin was featured on the cover of the Dartmouth College hockey team's program. He graduated from the Hanover college in 1982.

Cheshire County Attorney Chris McLaughlin in his office on the second floor of County Hall in Keene.

Chris McLaughlin was featured on the cover of the Dartmouth College hockey team's program. He graduated from the Hanover college in 1982.

When Chris McLaughlin was drafted by the New York Rangers in 1978 — an unattainable dream for scores of hockey players — his dad thought it was a joke.

Reclining in his chair at the Cheshire County Attorney’s Office in Keene on a prematurely dark November afternoon, McLaughlin broke out a wry smile and recalled a reporter calling the house after the defenseman was taken 206th overall in a draft class that included Minnesota North Stars legend Bobby Smith and Stanley Cup winning coach Joel Quenneville.

“I had no contact, no inkling that it was a possibility,” McLaughlin said, having just completed his freshman year at Dartmouth. “After the draft, my father [Don] got a phone call at our house from a reporter asking if he had any comment on me being drafted, and he was like, ‘You’ve gotta be kidding me.’

“He thought it was a practical joke someone was playing on him,” McLaughlin chuckled. “It was much different back then.”

Today, a player of McLaughlin’s caliber would be the subject of YouTube highlight reels, wall-to-wall draft-day coverage on TSN (the Canadian version of ESPN) and a whole host of perks on the coattails of mini-fame.

But back then, the culture around the sport was different.

McLaughlin stayed at Dartmouth to get his degree in sociology as the Rangers held his rights. And while he never played in the NHL, he had a stint of professional hockey in Germany and Austria after graduating, and continued playing at a relatively high level for 10 more years with the Concord Budmen as he began his legal career.

As notable as his tenure in the Elm City has been since arriving at the public defender’s office back in 1988, McLaughlin’s hockey achievements aren’t too far from one in a million.

The Ithaca, N.Y., native not only faced off against several members of the 1980 Miracle on Ice U.S. Olympic team, McLaughlin’s Big Green defeated Jim Craig and the Boston University Terriers in 1979 at the Boston Garden to advance to college hockey’s coveted Frozen Four.

McLaughlin could have been on that Terrier squad — having his final recruitment decision come down between BU and Dartmouth — with Olympians immortalized in the 2004 movie “Miracle” starring Kurt Russell: Craig, captain Mike Eruzione, Jack O’Callahan and Dave Silk.

The American team of college kids beating the hyper-professional Soviet Union to advance to a gold-medal victory remains a symbol of a golden age in American hockey, and the Cheshire County attorney not only skated with those players, but beat them.

Nevertheless, a run-in with Team Sweden humbled a young McLaughlin, with his Dartmouth team falling to the Three Crowns in an exhibition game ahead of the Olympics.

Hockey is in McLaughlin’s blood, with his father growing up outside Toronto before attending Cornell University, a longtime powerhouse in college hockey.

McLaughlin grew up by the campus in the upstate town of Ithaca after his father met his mother, an Ithacan named Ann Guentert.

When McLaughlin was coming of age, legendary Montreal Canadiens goaltender Ken Dryden was setting records in net for the Big Red, drawing sellout crowds to Lynah Rink on campus, where McLaughlin and his buddies would try and sneak in.

After a successful high-school career, McLaughlin played a post-graduate year at Deerfield Academy in Massachusetts to boost his stock as a recruit, with the New England Prep League featuring some of the best talent in the country.

Eventually, he got to live out a childhood dream and return to Lynah for a tournament while playing at Dartmouth.

The rink is set between rolling hills and diving gorges in Ithaca, with foreboding rafters saturated with championship banners that have had to be shifted to accommodate more victories over the decades.

The Cornell tradition remains with McLaughlin in a sense of pride, one that he carries with him in posture and a firm handshake.

From pucks to law

After taking the time on bus trips through Germany and Austria to consider what to do with his sociology degree, McLaughlin said he questioned where he could best be of use.

The answer ended up being the Franklin Pierce Law Center in Concord, which he said he “treated like a job,” commuting from a cabin in Andover where he lived with his new German shepherd.

After interning in the N.H. Public Defender’s Office in Keene while still in law school, McLaughlin stuck around and worked his way up the ranks, becoming county attorney — an elected position — in 2013.

He and his wife, Katherine, live in Westmoreland, with their kids both in college; Max, 23, is a senior at Wheaton College in Norton, Mass., and Sophie, 20, is a sophomore at the University of Vermont in Burlington.

McLaughlin had a brief stint in private practice focusing on criminal defense and some family law, but he has been in the thick of criminal cases for much of his career.

Although the population of Keene has not changed much since he arrived in the late ’80s, McLaughlin said he has seen a steep increase in staff. When he was coming up as a public defender, three of those positions were split between the courts in Cheshire and Sullivan counties, and Cheshire County had only two assistant county attorneys.

Now, there are usually six or seven public defenders in Cheshire County, and around eight assistant county attorneys, according to McLaughlin.

“I think it’s just the complexity of cases,” he said of the reason for the increase. “Police departments have probably become more sophisticated and professional, so more people are being arrested — and honestly, more recently, opiates and the whole drug problem.”

The job has always had tough cases to confront, but McLaughlin said he tries his best not to get cynical.

While the county attorney has to maintain an air of severity by necessity, once he gets talking about what grinds his gears with modern hockey — and what it says about contemporary American society — he starts to unwind a few notches and let some near-profanities slip.

“Not to get too nostalgic or romanticize stuff too much, but I remember when I grew up, I skated on a pond as much as I skated in a rink,” McLaughlin said as the lights began to flicker on over his shoulder in Central Square. “There’s not this freedom with youth to explore either athletically or in nature, in many ways, and everything is so friggin’ organized ...”

While getting a bit more animated discussing the decline of pond hockey in New England, McLaughlin was making a broader point about childhood development and human psychology.

Letting the kids go out on their own to play and take risks, he said, is what builds stronger communal bonds and teaches kids their limits, along with how to overcome failure.

From his view at the Cheshire County Courthouse, that helicopter-parent mentality has had other ramifications that 21st-century American society is only just starting to come to grips with.

“Obviously people [eventually] figure it out, but I think kids used to have to figure crap out on their own,” he quipped.

In briefly entertaining the alternate universe in which Cheshire County Attorney Chris McLaughlin was born in the 1990s or 2000s instead of the ’50s, he took a beat and unfurrowed his brow.

If he’d grown up with Fortnite and Snapchat instead of hours on the pond, would he still end up heading the Cheshire County Attorney’s Office?

He said it’s hard to tell, given how much sense it made to learn the rules of the road on his own back when kids had more independence.

“Whereas now, kids can still find that [passion for what they love doing], but it’s not as natural,” he said.

Of all the sports out there, perhaps the reckless and dangerous possibilities presented by hockey have given McLaughlin an immediate sense of the need for there to be a neutral authority figure.

Beyond the official rulebook and purview of referees, players enforce what’s long been known as “the code,” an unwritten set of rules agreed upon to keep skate blades and sticks from getting anyone hurt. Other clauses include avoiding getting snow on the goalie when stopping in front of the net, and not celebrating in front of the other team’s bench.

“It’s true about hockey that it’s a tough game, but most of everybody involved in it is pretty honorable,” McLaughlin said. “And after the game, everybody goes their own way and is very civil about everything.”

At a glance: Chris McLaughlin