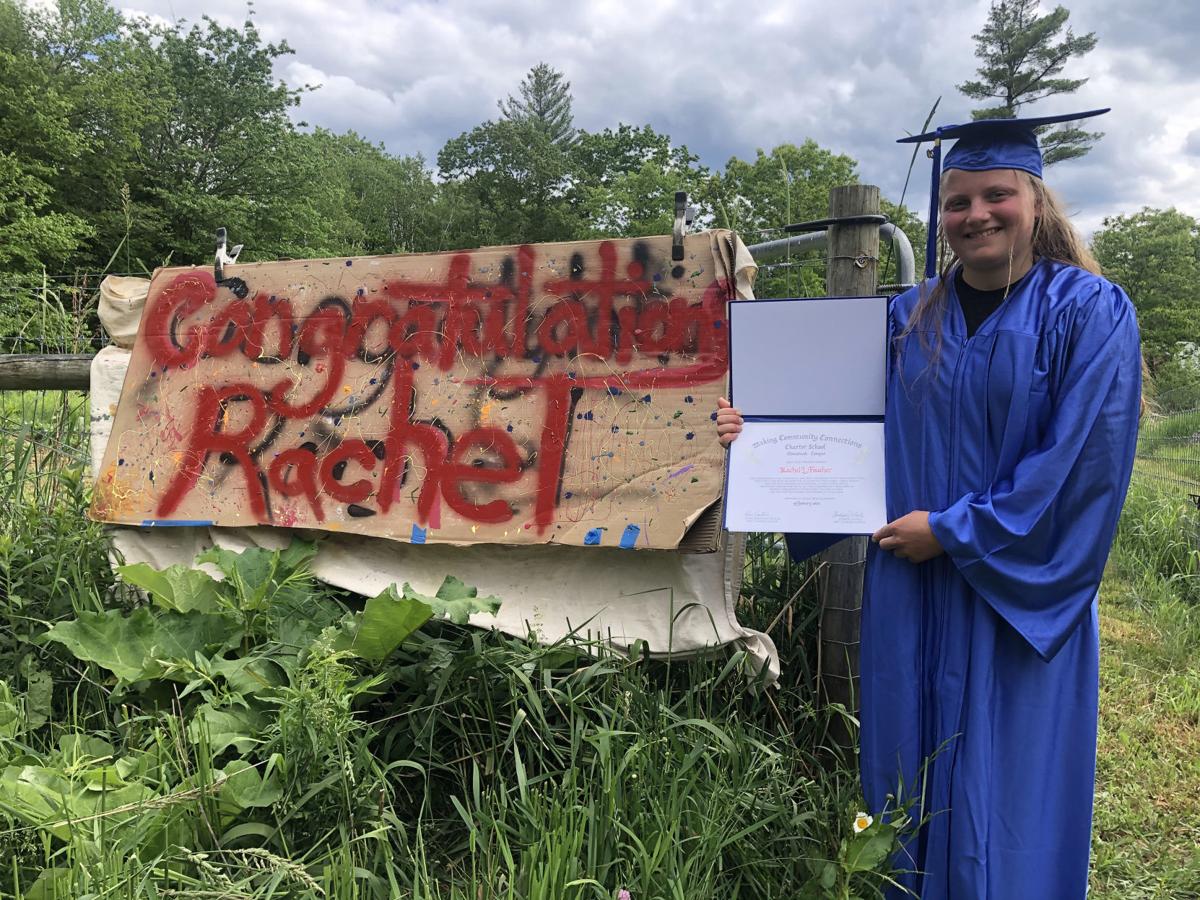 Rachel Foucher of Nelson received her diploma from Making Community Connections Sunday at a ceremony at her home. 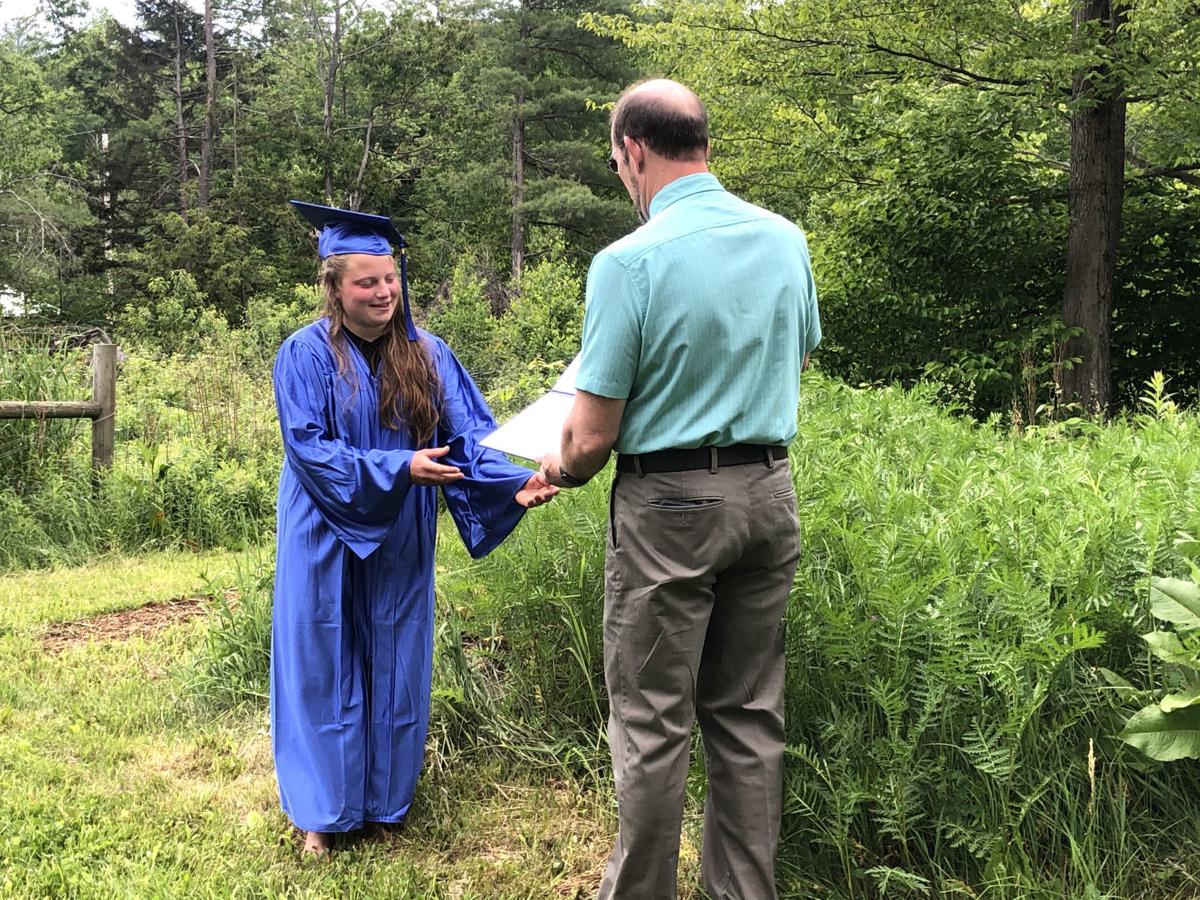 Rachel Foucher of Nelson received her diploma from Making Community Connections Sunday at a ceremony at her home.

In the age of COVID-19, graduations have had to adapt — drive-thru ceremonies, virtual commencements and socially distanced gatherings have all become par for the course. But a Keene charter school found a unique way to send its graduates off to their next chapter.

The students of Making Community Connections Charter School graduate at different points throughout the year, meaning commencement ceremonies occur on a rolling basis, according to School Leader Chris O’Reilly. Because of this, the school, also known as MC2, hosted individual ceremonies for each graduate, or ceremonies where a few students graduating around the same time were recognized together.

While the COVID-19 outbreak forced many schools to cancel or postpone their commencements, Making Community Connections has been able to continue its usual tradition with some adjustments.

“We were going to have a few together, but of course under COVID, we weren’t able to really do that,” O’Reilly said. “So we decided to go out to the individual houses and then let the families decide how they wanted to have the graduation.”

O’Reilly said they did four commencement ceremonies throughout the Monadnock Region over the weekend, finishing in Nelson to celebrate the graduation of 18-year-old Rachel Foucher.

Foucher had returned home Saturday from a journey with Kroka Expeditions, a Marlow-based organization that combines academics with outdoor experiences. On Sunday afternoon, she stood outside her home in a cap and gown, surrounded by her family and school officials, to receive her diploma.

Foucher said she’s not a big fan of large gatherings anyway, and that she preferred the smaller celebration offered by her school. She added that ceremonies she’s attended for classmates have been nice events, giving the graduate a chance to be recognized as an individual.

“When you go to an MC2 graduation, it’s really special,” she said.

Now that she’s completed high school, Foucher intends to return to Kroka, where she’ll work for the summer before heading off to Thompson Rivers University in British Columbia, where she plans to pursue an adventure-guide diploma.

During a typical individualized MC2 graduation ceremony, friends and family members generally attend to speak about the graduate — the student’s accomplishments and future, O’Reilly said. Because of the pandemic, Foucher’s celebration was a bit smaller than usual, but her friends and family sent in letters to wish her well in the future, which were read by her parents, siblings and O’Reilly.

He and Elizabeth Cardine, lead teacher and Foucher’s former adviser, both praised her efforts over the years, her growth as a person and her adventurous spirit. Cardine called her the “quintessential MC2 learner.”

“If I could do it all again, I’d follow your path,” she told Foucher in a speech she gave during the ceremony.

Foucher’s mother, Joan Foucher, said she thought it was “amazing” that she was able to have a ceremony for her daughter during the COVID crisis. She said they didn’t get much time to celebrate the end of Rachel’s high school career, adding that she left to go on the Kroka expedition the day after giving her final presentation.

The expedition group returned last month from a four-month trip north into Canada and back again and spent two more weeks at the Kroka campus in Marlow before coming home. Joan Foucher said her daughter planned to be home for only two days between returning from the expedition and going back to work at Kroka, but MC2’s staff didn’t forget she still needed her diploma.

“They came up with this idea of the pop-up graduation, and I thought it was great,” she said. “She’s just transitioning, so to have it here and home and have just a short ceremony and an honoring is a wonderful idea, and I think it has gone really well.”