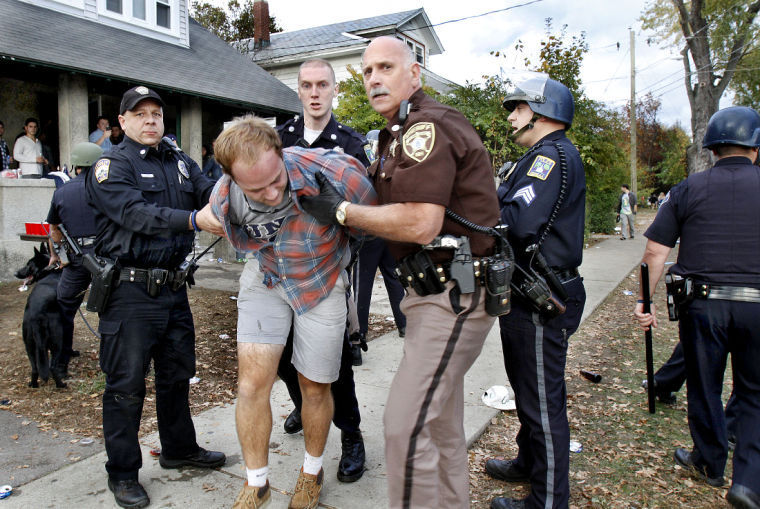 Police and sheriff's department take a a man into custody on Winchester Street in Keene on Saturday afternoon. 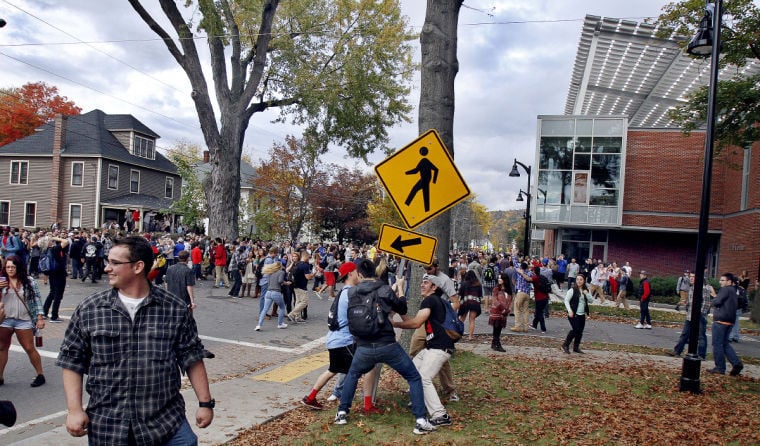 One of several street signs is taken down by rioters on the corner of Winchester and Blake streets in Keene on Saturday afternoon.

Police and sheriff's department take a a man into custody on Winchester Street in Keene on Saturday afternoon.

One of several street signs is taken down by rioters on the corner of Winchester and Blake streets in Keene on Saturday afternoon.

Downtown on Saturday, it was Keene’s day to shine. But in the neighborhoods surrounding Keene State College, it was anything but.

Hordes of college-aged people overwhelmed the area, traveling en masse from street to street, and testing the manpower of police from across the area, who dressed in riot gear. Police worked to prevent the crowds from pushing into the Pumpkin Festival footprint.

It was like nothing Keene had seen before during a Pumpkin Festival weekend.

“It’s (expletive) wicked,” said Steven French, an 18-year-old who was said he was visiting from Haverhill, Mass.

“It’s just like a rush. You’re revolting from the cops,” he said, sometime after 9 p.m. “It’s a blast to do things that you’re not supposed to do.”

French stood on the sidelines of a group hundreds of people strong on Winchester Street. The young people shouted expletives — many of them directed at police — started fires on the roadway, and pulled down a street sign before slamming it on the pavement, to the roars of the crowd.

At one point, several appeared to be attempting to flip a Subaru Tribeca in a Keene State parking lot before abruptly running away.

“Let’s (expletive) riot,” said one person, who identified himself only as “John Doe.”

“I feel really disrespected, to be honest,” she said, explaining how she was particularly upset that participants included Keene State students and their guests. “It’s not their home. ... It’s just really rude.”

Numerous injuries were reported throughout the day, including lacerations from people who were hit by flying beer bottles.

As of 9:30 p.m., officials at Cheshire Medical Center/Dartmouth-Hitchcock Keene said there were no serious injuries.

However, more injuries were reported as the night wore on, and it’s unclear how serious they are.

Police made arrests, including for disorderly conduct and alcohol-related offenses, but details were not available.

“No, that’s their own stupidity,” said the man, who said he was visiting from Athol, Mass.

In addition to throwing bottles, people also were hurt by fireworks.

Police in riot gear formed barricades in the Winchester Street area in the afternoon, shooting rubber bullets at the crowd that enveloped the Keene thoroughfare. Tear gas was also used in an attempt to disperse crowds at parties that raged through the day.

The most problematic areas were reported on Blake Street, Butler Court, Winchester Court and Winchester Street.

Emergency officials were so overwhelmed they did not have time to provide information on the number and types of injuries and other details about the response to the incidents in Keene.

Officials at Cheshire Medical Center’s emergency room said a mass casualty alert was issued at about 2:30 p.m. That meant Cheshire Medical Center and other area hospitals galvanized their resources and manpower in case it was necessary to treat a large number of victims. Hospital officials were first told busloads of victims might be coming in, but that turned out not to be true.

The hospital did treat a heavy flow of patients in the afternoon and evening, mostly for lacerations and blunt trauma, but by 9 p.m. the ER waiting room was almost empty.

Unruly crowds in the Keene State neighborhood have been a problem in recent years, frustrating nearby residents.

But the sheer number of people on the streets this year was “staggering,” said Keene City Manager John A. MacLean.

Saturday afternoon, he said those areas were “out-of-control” at times and that all available manpower had been called.

The Keene police, Keene fire and Keene public works departments, N.H. State Police and other area agencies “have done an incredible job minimizing the problems we’ve been having,” MacLean said.

Keene State President Anne E. Huot said in a statement she was “saddened and disheartened at the events surrounding this year’s Keene Pumpkin Festival. Despite the concerted efforts of organizers, city officials, police, and Keene State College, there continued to be disruptive behavior at parties in multiple locations around the city, injuries, and property damage.

“We are mindful that Keene State students played a part in this behavior and we intend to hold those individuals accountable for their actions. We deplore the actions of those whose only purpose was to cause mayhem. And we are grateful for the swift response of law enforcement and first responders who worked to minimize injuries and damage.”

MacLean said Saturday evening the goal during the festival was to treat injuries caused by thrown objects and fireworks and keep the festival attendees safe.

“Ultimately we’re trying to take care of our community and hopefully just get people to keep moving and stop rioting,” he said.

At 3 p.m., hundreds of people had filled a backyard on Winchester Court, where they were setting off fireworks, throwing beer bottles and wrestling in a large patch of mud in the middle of the crowd. Police surrounded the area and attempted to control the crowd with tear gas and rubber bullets.

Meghan Tomaselli, a Keene State senior, said she had been at the party and had not expected the police response.

“They came in and tear-gassed us with no warning — someone got hit by a pellet gun,” she said. “That’s a concussion-and-a-half.”

Several people walked onto Winchester Street with blood streaming from their heads after being struck by thrown objects, and emergency workers tended to them as they also tried to treat people with alcohol-related injuries.

By 4 p.m., police had barricaded off Winchester Street at the bike path. Many people walked past them, cursing and yelling and making rude gestures in the officers’ direction.

People in the crowd stopped several times to pose for pictures with the Keene police cruisers before continuing to walk down the street. People also posed for selfies with a barricade of police who moved down Winchester Street.

One man, Andrew Cane, walked in front in front of the barricade to tell people to get on the sidewalks and to keep moving.

“My friends go to Keene (State College) ... I’m trying to keep people in line. No one needs to get hurt. Let’s just have a good protest.”

For the rest of the afternoon and into the night, police from towns across the state tried to contain the hundreds of people as they spilled into the streets near the campus, pulling street signs out of the ground and running near Winchester and Blake streets.

Gov. Maggie Hassan visited Keene during the Pumpkin Festival, but met with safety officials because of the incidents.

Rowdy parties and drunken antics during last year’s Pumpkin Festival, riots after the Red Sox won the World Series and other city-college issues such as parking and students led to the creation of a town-gown commission. The commission is expected to create working groups that will discuss a number of issues in addition to off-campus student behavior.