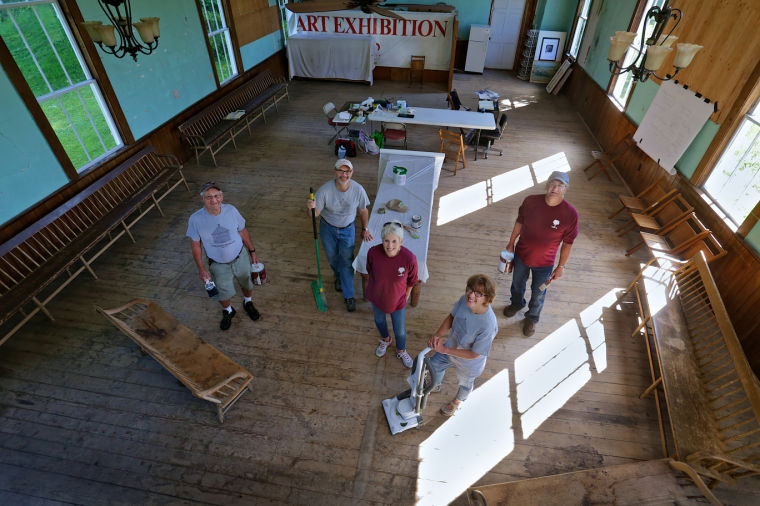 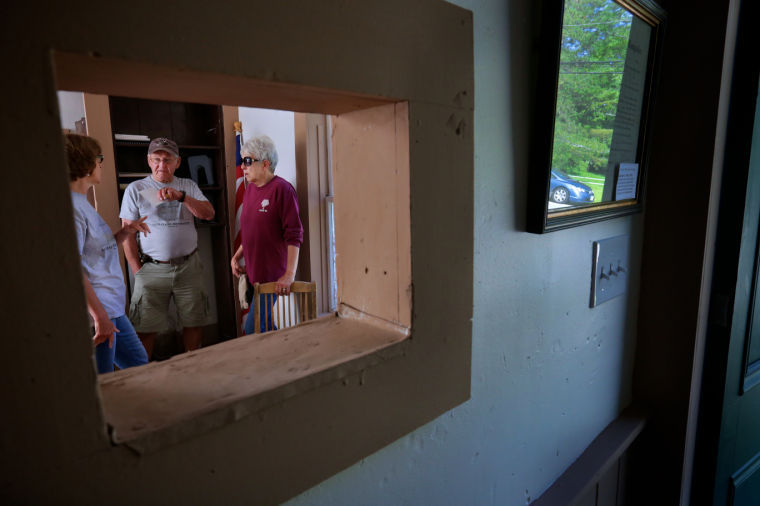 Seen through what may have been an old ticket window inside the foyer of Murray Hall are, from left, Joanne Thomas, and Joe and Maria Baril, who are discussing work that needs to be done on the hall's dumbwaiter (in background).

Seen through what may have been an old ticket window inside the foyer of Murray Hall are, from left, Joanne Thomas, and Joe and Maria Baril, who are discussing work that needs to be done on the hall's dumbwaiter (in background).

MARLOW — It was once a grand hall owned by the local grange, whose members hosted dinners, dances and meetings there.

Before that, it was a church where Methodists — then Universalists — gathered.

Starting in the 1980s, it housed a storage area and workshop for a computer business that has since become a Fortune 1,000 company.

Now, Murray Hall is entering its next chapter, as the Marlow Historical Society seeks to transform the mostly vacant building into its new home, with space for a museum and community meeting area.

It has been something the society’s membership has wanted to do for a long time, President Joanne C. Thomas said Thursday. While much of the organization’s small but rich collection has been on display a few buildings down from the hall on the second floor of the Methodist Chapel, what doesn’t fit has been stored at places around town.

The chapel space, which now houses the historical society’s office, is cramped and can only be accessed by a steep and narrow staircase, Thomas said.

“We want the museum to be accessible to everyone to show them Marlow’s history,” she said. “We want there to be space for people to come look at our archives. We’d like to see community groups start using the building.”

Thomas said the historical society has paid rent for the space at the chapel at the same time it owns Murray Hall and pays insurance on it. It didn’t make sense to keep doing that, she said.

Patricia Gallup and David Hall, who owned Murray Hall for their company PC Connection, gave the white, stone-foundation hall on Forest Road (Route 123) to the historical society for $1 in 2002. While the society had the roof reshingled and windows reglazed, the building has pretty much remained untouched since then, said Thomas’ husband, Ed, a historical society member and town selectman.

The hall, which is about 1,000 to 1,300 square feet, was named in honor of John Murray, the founder of the Universalist church in the United States.

It was originally built in 1849 on Marlow Hill as the Second Methodist Church. The construction, according to town history, was done in protest of the First Methodist Church moving its building from the hill to the town’s present-day village area. At the time, the story goes, residents were leaving the farms on the hillside to work at factories in the village.

The Second Methodist Church’s membership dwindled and in 1873, the Universalist Society bought the building, later moving it to where it stands now.

The Universalists sold the building to the Patrons of Husbandry No. 136 in 1909 and it became Excelsior Grange. According to town history, the building’s steeple was removed sometime after 1916 as it had become too costly to repair.

The steeple remains missing to this day, Thomas said.

Those funds allowed for the society to have the building wired and period light figures installed in the hall.

“But now we’re back at the beginning and there’s still a lot of work to do,” she said.

The pale green walls and ivory ceiling need to be painted, since both have widespread chipping, cracking and peeling. The gloss that once covered the hall’s finished wood floor is long gone.

The repair and improvement work that’s been done to date has all been by volunteers, Thomas said. But historical society members know they’ll need a professional to address the ceiling, she said.

Ed Thomas estimates that it will take another $20,000 to $50,000 to get the hall back into good shape. The wooden building itself is structurally sound, he said, and its foundation was leveled a few years back.

Murray Hall’s entrance is marked by two steps and forest green doors that have recently been refurbished. Inside, three-ring binders, historical knickknacks, and some souvenir T-shirts and cards are divided among two shelving units in the cozy earth-tone foyer. To the right, a smaller room will eventually become the historical society’s office.

The foyer opens into the high-ceiling, naturally lit hall. Sunlight streams through four, two-story-high windows each on the left and right sides of the building. In the middle is a modern, portable table with art supplies surrounded by some chairs. Behind it is a sign that reads “Art Exhibition” in bright red.

Joanne Thomas said the town has an art colony whose members like to use the building as a place to work on their creations.

While the renovations remain ongoing, the historical society has begun moving its offices and collection into Murray Hall.

Thomas said the plan is to divide the hall down the middle from front to back — one side will be the historical society’s museum, and the other will be a community space that could be used for events such as meetings and art exhibits. The new location will also give the society space to grow its collection, she said, which among other historical documents and artifacts includes a hearse once owned by the town.

It’s being stored in a 19th-century hearse house that the historical society owns. The plan is to move the hearse into the museum, and the house to the side of the building where it would be converted into a tool shed, Thomas said.

“The idea is to eventually have everything under one roof,” she said.

The Marlow Historical Society hopes to have its offices and collection moved into Murray Hall by the end of September. If not, the drop-dead date will be by winter, she said.

Baril said the society, which has 65 members, can’t afford to heat the building during the winter, so it will only be opened seasonally during the warmer weather. She said the society’s members aren’t all full-time Marlow residents — some have summer homes in the community, and others keep up their membership because their families are either from the town, or they grew up here.

Thomas said once Murray Hall is fixed up, there will be so much the historical society will be able to do with its programming, especially for school children.

The historical society also has a vision of making the hall a destination for not only locals, but others visiting the town, she said.

“We’re working a lot with other groups in town to foster a sense of community here,” she said. “This is one way we could do that.”