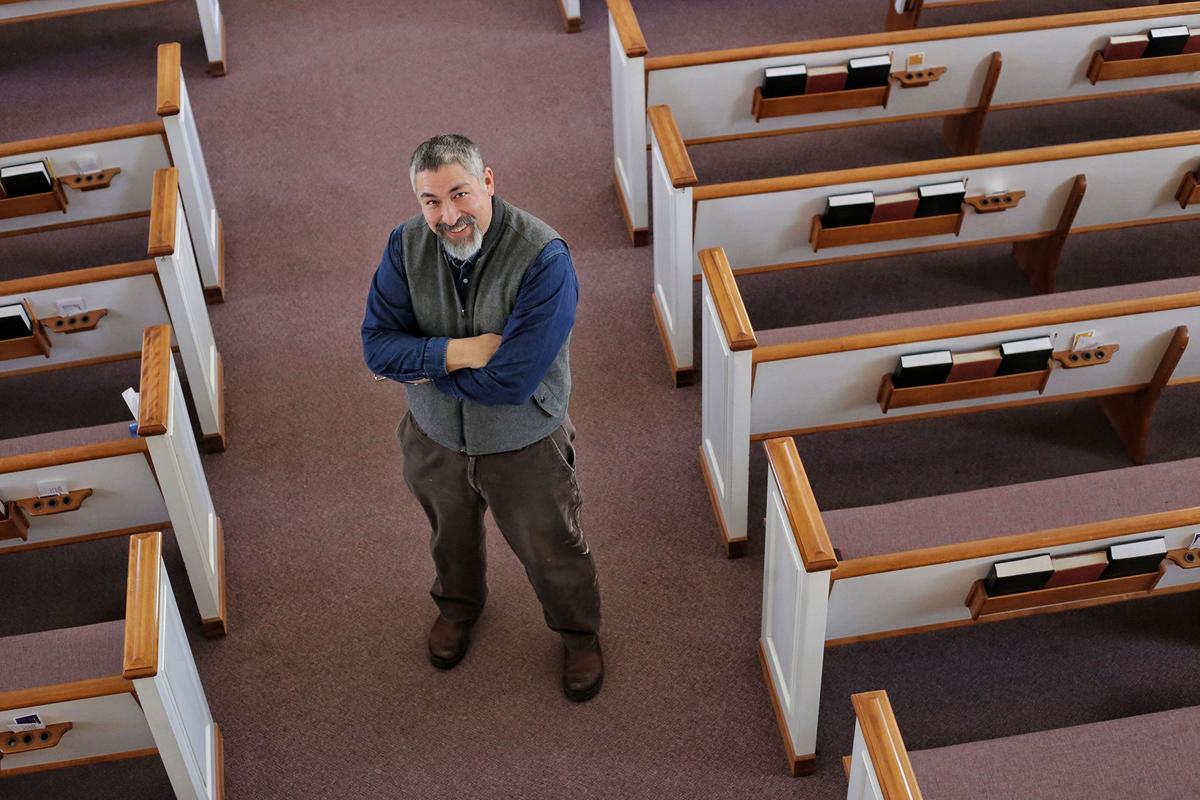 The Rev. Mark Koyama stands amid the pews at the United Church of Jaffrey. 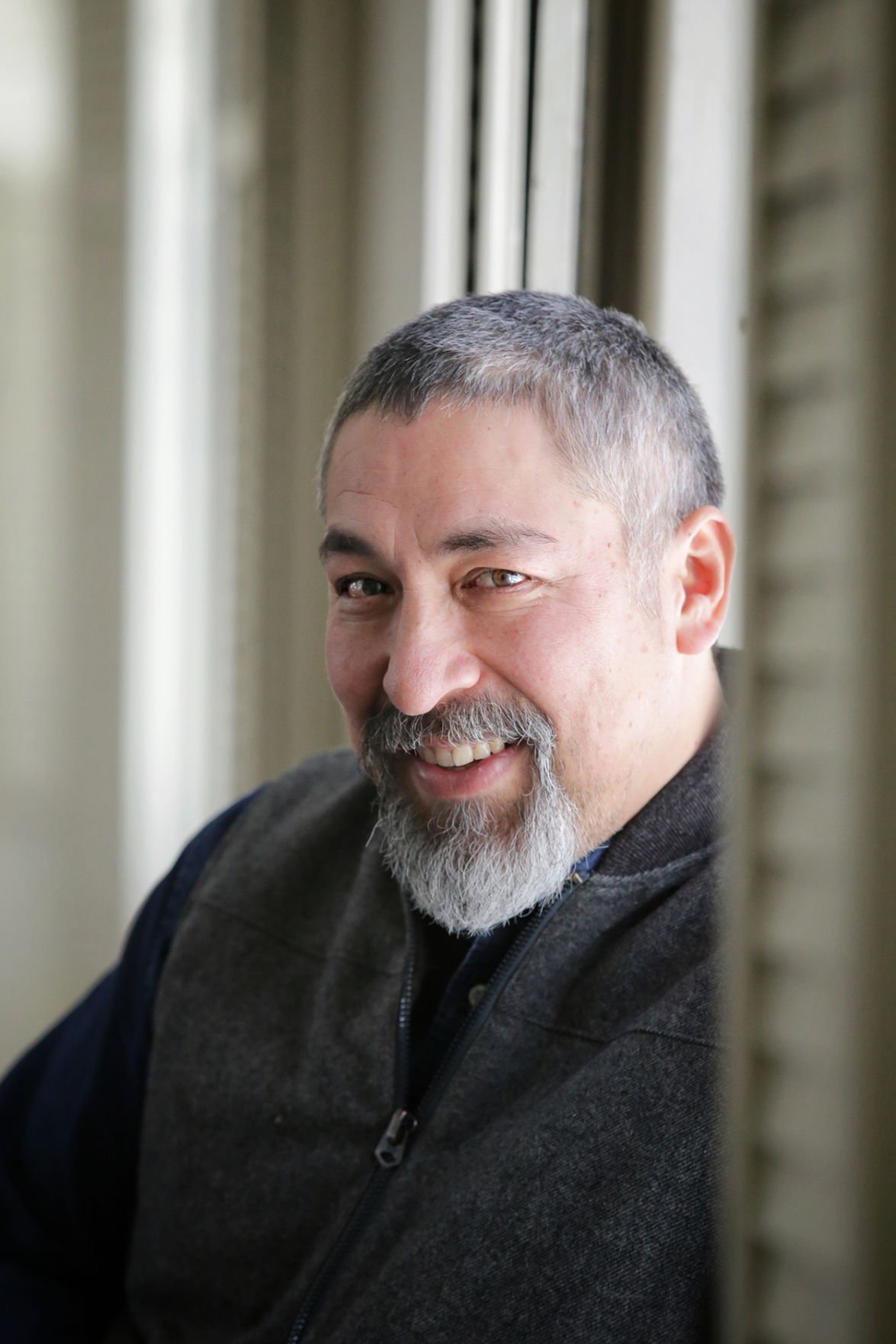 The Rev. Mark Koyama stands amid the pews at the United Church of Jaffrey.

I t isn’t easy to fit the Rev. Mark Koyama in a box that describes his personality, or to sum up what he does with a few adjectives. He’s a gardener, a scholar, a teacher, a musician, a writer and the minister of the United Church of Jaffrey.

And on top of all that, his reservoirs of dry humor can make even a seasoned comedian thirsty.

For instance, though he plays mandolin for a folk music trio named “Heathen Creek” — named after the body of water where they started practicing — he’s quick to note that neither the religious congregation he leads nor the Jaffrey community have given him flak for the name.

“I’m a yellow belt … it would be great if I could say I was a brown belt or a black belt,” Koyama said.

He’s working on it.

And for a guy with a computing and tech background — he spent the better part of a decade as a technical support analyst for top-tier business schools — he pulls off the New England outdoorsman look pretty well.

On Friday, Koyama, 51, of Turners Falls, Mass., rolled into the United Church of Jaffrey wearing a vest and rubber boots. He’s been the settled minister here since November.

With a broad smile and serene demeanor, he quickly changed into shoes more standard for one of his Sunday sermons. Reflecting on how preaching fits his personality, he said he’s someone who gets a sense of well-being “from being with other people, rather than (primarily) being with machines” and wants to pursue “the truth of the heart” in addition to literal truth.

During the week, he also works another job, as an adjunct religious studies instructor at Northfield Mount Hermon School, a preparatory high school in Mount Hermon, Mass.

He’s developed a philosophy of teaching and good writing that, like many things in his life, was inspired by his father, the late Kosuke Koyama, a renowned Japanese-born Christian theologian.

“You don’t have to spell everything out … the best teachers can provide meaningful breadcrumbs rather than just spearing things from place-to-place … so that the person learning is doing the work and connecting the dots,” he said.

To his wife, Cary Hardwick, 50, that kind of holistic, sometimes metaphorical thinking isn’t just an ideal, it’s part of who Koyama is.

“In day-to-day living with Mark, (I) see him express the ‘now’ through narrative … he likes to interpret the world through story; you can see that in one of his sermons,” Hardwick said.

And similar to how Koyama focuses on an inner balance of both speaking and listening, preaching and teaching, the congregation he leads tries to pursue peace through an inclusive message.

A rainbow flag flies prominently from a high position near the front of the church, which Koyama explained as a symbol that shows the church is open to everyone, irrespective of race, creed, sexual orientation or religion.

He said he had heard of vandalism attempts on the flag in the past, but to Koyama, the diversity it stands for isn’t an abstract mission statement, it’s in his DNA.

As told by Mark Koyama, his parents met in the U.S. during the postwar years, when they were both graduate students; from there, his father’s mission work carried the family across many borders until Mark was a teenager.

In 1974, Kosuke published one of his most famous books, “Water Buffalo Trilogy,” which is a theological work set in Asian villages.

As explained in his 2009 obituary in The New York Times, Kosuke was renowned for “(striving) to make the teachings of Christ culturally meaningful to Asians, without sacrificing the essential Gospel message … and was known for using arresting metaphors drawn from his experience as a missionary to convey an influential vision of Christianity as compatible with Asian traditions.”

After Thailand, the Koyamas went to Singapore, Hong Kong, Taiwan, Japan, Australia and New Zealand before finally moving to New York City in 1979, when Kosuke took a position at the Union Theological Seminary.

While he was only two when they left Chiang Mai, Mark Koyama has many fond memories of the family’s next destination: Singapore. They’re childhood classics, fit for the tropics.

“I didn’t really wear shoes very often in the early part of my life, because in the tropics, you don’t really need shoes. And we would run around with long bamboo sticks and bang the mangoes off the mango trees … and running around the monsoon rains … it’s very romantic and beautiful,” he said.

At home in Turners Falls, where he lives with Cary, Amos, Silas and his daughter, Isabel, 22, Koyama also attempts to find peace in gardening. There are many raised beds in the family’s side yard, which Mark made himself, adding that doing so was a way to grieve after the loss of his mother in 2011.

When he’s up early, Cary said, tending to the garden is Mark’s first order of business. This past growing season, they brought in a healthy variety of fruits and vegetables, including cucumbers, kale, tomatoes and watermelon. Sometimes, fruit-filled desserts are also on the menu — and Koyama can make a mean apple pie.

And in the near future, the minister said he wants to share his gardening passion with the church community and greater Jaffrey — perhaps by tending a small plot in town.

In any case, he wants those around him to know that he’s available to listen to them, because communication is a two way street — and he’s “looking for meaning that can go in multiple directions.”