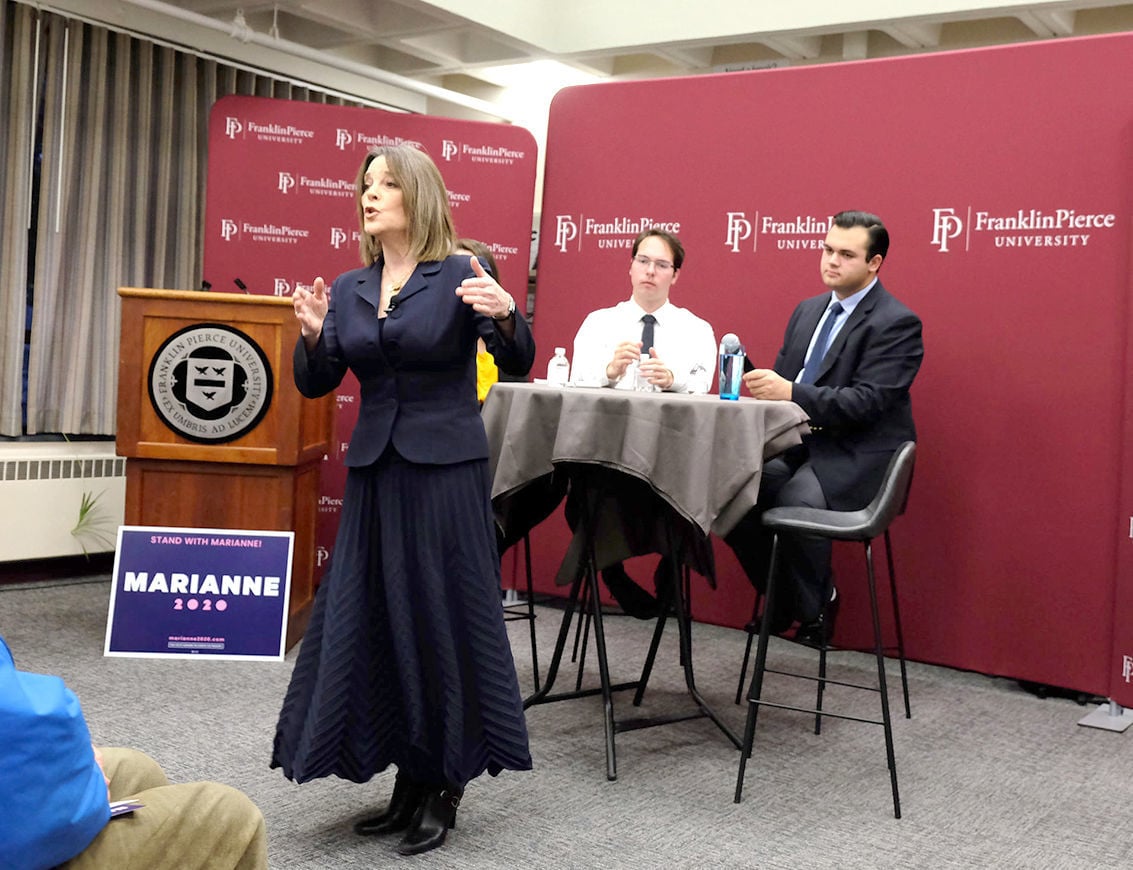 Self-help author and Democratic presidential candidate Marianne Williamson speaks to students and staff at Franklin Pierce University Monday. Williamson touted her message of love and said her campaign has suffered from attacks against her by the media. 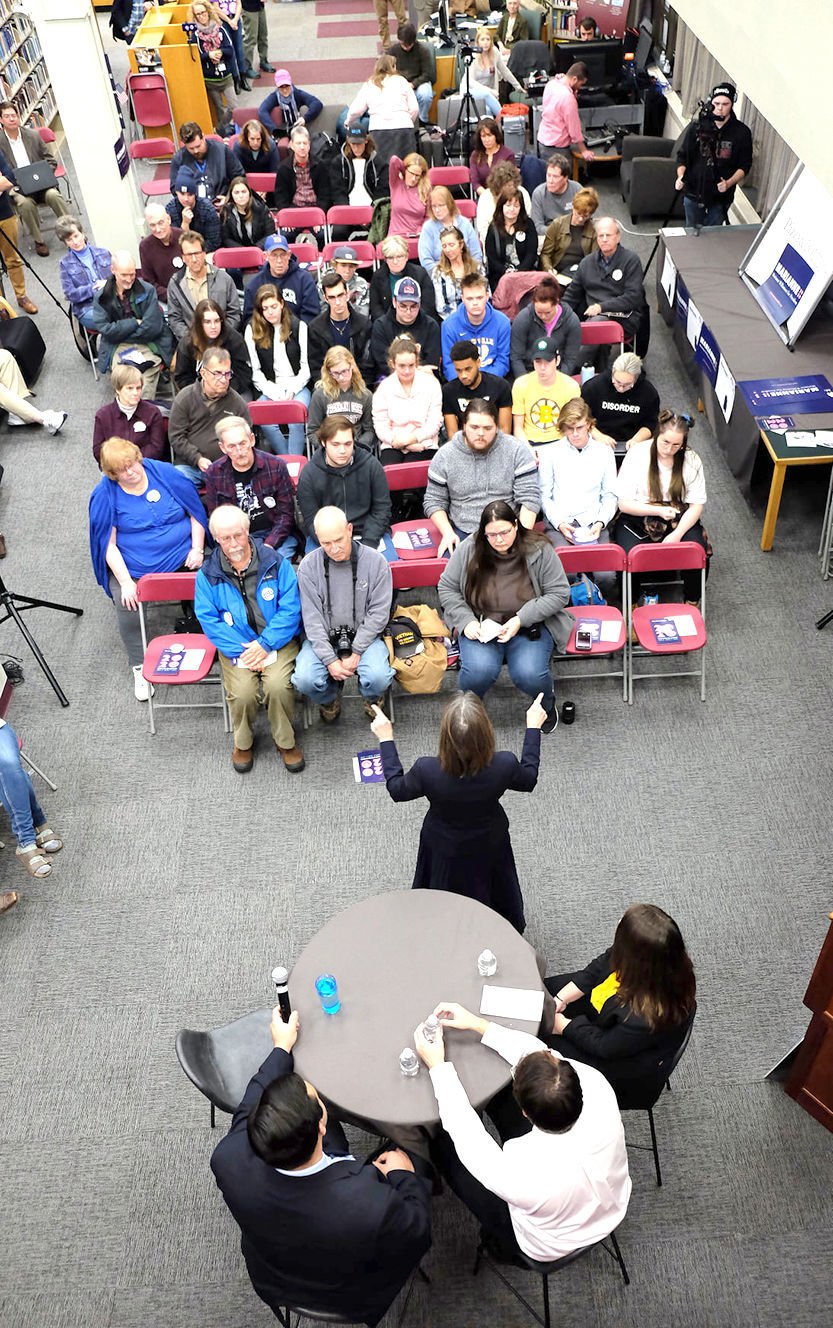 Self-help author and Democratic presidential candidate Marianne Williamson speaks to students and staff at Franklin Pierce University Monday. Williamson touted her message of love and said her campaign has suffered from attacks against her by the media.

RINDGE — If Marianne Williamson had a million dollars, she says she would buy some ads and set the record straight.

Months after surging in Google searches following her early televised presidential debate appearances, the spiritual self-help author has remained a unique voice in the Democratic primary field despite failing to qualify for the most recent ones.

“There are people who have vested interests in leaving me out,” Williamson said in response to a question on what she thinks of the Democratic National Committee’s debate qualification rules, which consist of steadily increasing thresholds for polling and individual donors.

The way to get back in the national conversation, she said Monday evening at Franklin Pierce University’s “Politics and Pizza” forum, is for voters to go to her website and donate so her campaign can hit the airwaves with ads.

“When Marianne speaks to people, the enthusiasm is palpable, the response is immediate and strong,” Paul Hodes, Williamson’s state director and a former U.S. representative for New Hampshire’s 2nd Congressional district, told The Sentinel afterward.

Hodes said the campaign is also looking to build its grassroots operation from the field office in Concord to a new one along the Seacoast and more campaign visits to the Monadnock Region.

Monday was Williamson’s second visit to the region after a double-header in Keene back in May.

While she had speculated about her own potential assassination at the Keene Yoga Center on a humid day in the Elm City, she began her remarks on a more frigid night in Rindge by recalling then-President John F. Kennedy’s assassination.

Assassination as a motif isn’t the point, according to Williamson. Her campaign, as she tells it, is about bringing truth and spiritual healing to a nation she describes as suffering from “an identity crisis,” “depression” and “soft tyranny.”

But in bringing her unique message to the fore on national television, Williamson alleged Monday night that the national press has sought to silence her through “character assassination” by bringing up past statements she’s made about mental illness and vaccinations, in order to hold onto their profits.

One instance she delved into in response to a voter question on the debates and media bias was an early August interview with CNN’s Anderson Cooper about skepticism she has espoused over anti-depressants and vaccines.

Cooper asked Williamson about how she has described psychiatric medications as making people “numb” or serving as a “mask,” and whether her sentiments reinforced the stigma of mental illness.

In both the Cooper interview and Monday in Rindge, Williamson said she has been focused a “nuanced conversation” on “normal human despair,” seeking to call out the overprescription of anti-depressants in the way opioid painkillers have been overprescribed.

She went on to question Cooper’s journalistic integrity over his outspokenness on using anti-depressants, linking it to pharmaceutical companies advertising on CNN.

“It was an ambush from Anderson Cooper,” Williamson said, noting how she felt a post-debate interview with him a few nights prior went well. “ ... Here is a man — and I’m sure he’s a lovely man, Anderson Cooper — who admits on the show he’s on [anti-depressants], whose show is sponsored by big pharma, who has a segment called ‘Keeping Them Honest,’ who comes after me.”

Asked afterward if she meant Cooper was a biased interviewer for being open about using medication, Williamson said, “Yes, I think that if you yourself — I think that there are issues of journalistic ethics that were involved there, yes.”

When asked if there were any other issues of journalistic ethics with Cooper beyond his outspokenness on treating depression with medication and pharmaceutical companies advertising on the network, Williamson nodded to indicate those were the only two.

A CNN representative did not immediately return a request for comment.

Andrew Royce, a Franklin Pierce freshman from Richmond, said he found some of Williamson’s allegations to be a bridge too far.

“I think the medication — she’s definitely on the more spiritual side of things, and that’s a different way of coming at it,” Royce, a political science major, said. “I think the idea that there’s a conspiracy against her is ludicrous.”

Denis Melican, 69, on the other hand, said he jibed with Williamson’s message and compared her to JFK.

“I would tell anybody, go home and google JFK’s peace speech and ask yourself whether she’s simply doing what he was trying to do,” Melican, who lives in Spencer, Mass., said, praising Williamson’s plan to establish a Department of Peace. “... And he died six months later trying to end the Cold War.”

Reparations, which Williamson’s campaign has described as one of her signature issues, were mostly absent from her remarks in Rindge. Instead, she focused on her plans to establish not only a Department of Peace, but a Peace Academy similar to the United States Military Academy at West Point.

Several older voters in attendance said they resonated with Williamson’s message as a modern version of the anti-Vietnam War movement of the 1960s and ’70s.