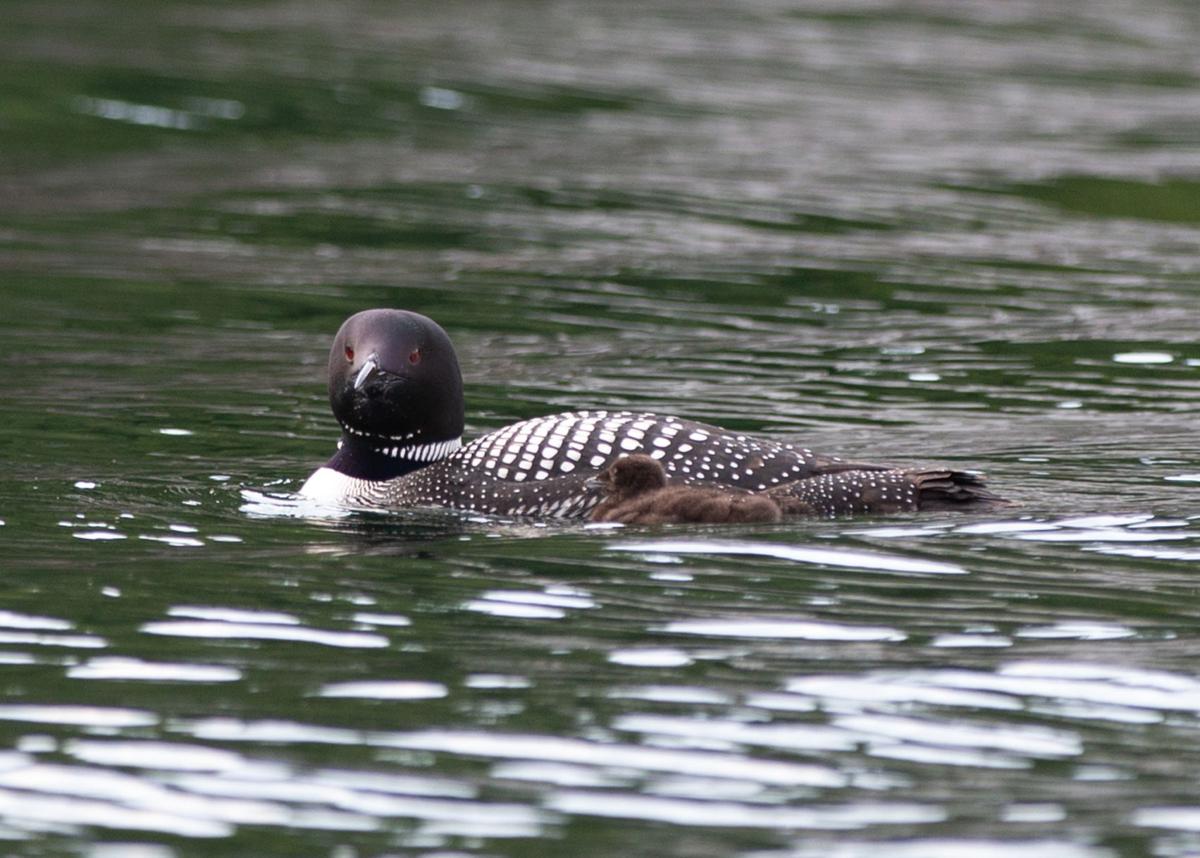 A mother loon swims alongside her chick in a western cove of Spofford Lake on Monday. The chick hatched June 23. 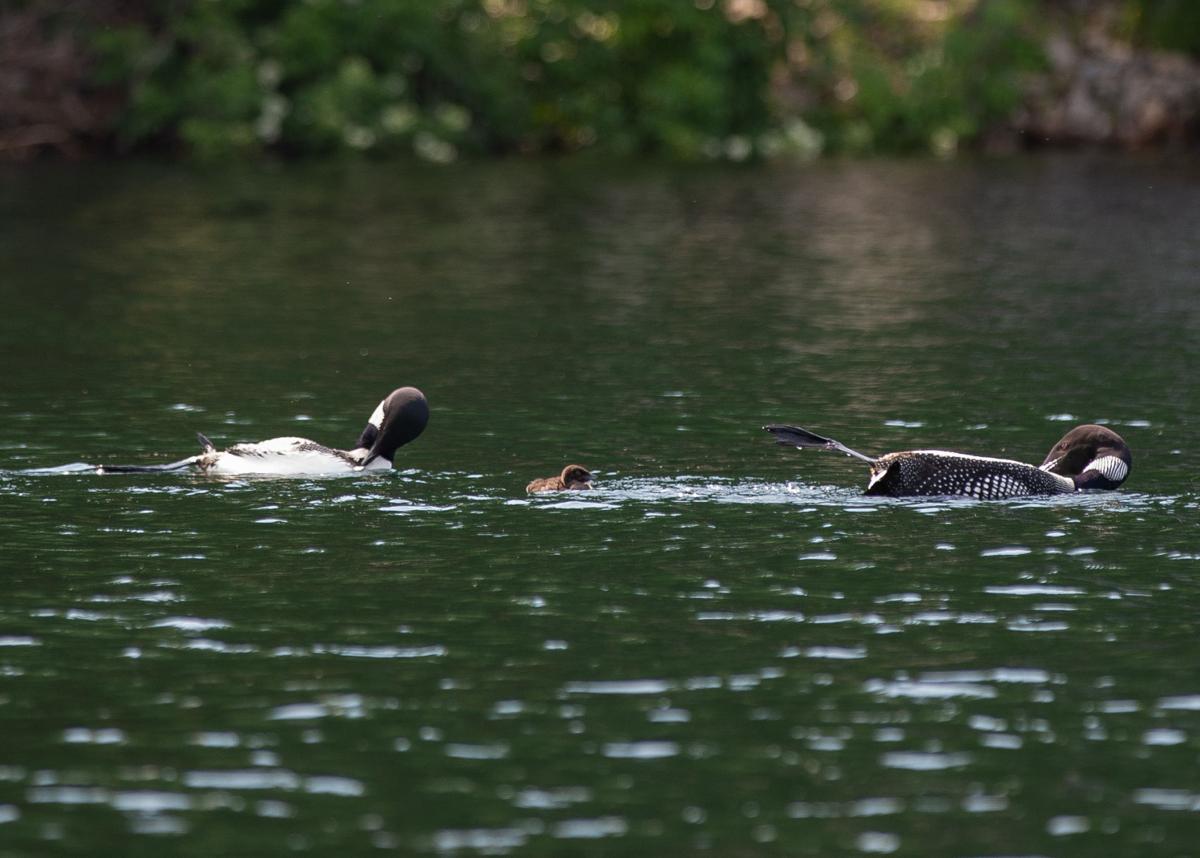 Mother and father loons preen their feathers as their chick swims alongside them in a western cove of Spofford Lake on Monday.

A mother loon swims alongside her chick in a western cove of Spofford Lake on Monday. The chick hatched June 23.

Mother and father loons preen their feathers as their chick swims alongside them in a western cove of Spofford Lake on Monday.

On June 23, a loon chick hatched on Pierce Island, a small piece of land near the western edge of the lake. This is the second year in a row the residential loon pair have had a successful breeding season.

The common loon is recognized by the state as a threatened species, meaning it could become endangered if health, habitat and human-impact issues continue to harm the population, according to N.H. Fish and Game. Though odds are often stacked against loons, the family on Spofford Lake seems to be doing just fine — much to the delight of the lake’s residents.

On Monday afternoon, Val Starbuck watched the loon family from her home. The parents dove to retrieve fish, returning to the surface to tear bits off to feed the six-day-old chick.

“The whole town of Chesterfield has something to be very happy about, that one more aspect of Mother Nature has made its home on Spofford Lake,” she said.

Starbuck has lived on Spofford Lake for more than 20 years, but it was only eight years ago that she noticed a loon pair stayed on the lake for the entire summer. Loons spend their winters on the ocean and fly to lakes and ponds for the summers, typically returning to the same body of water each year for breeding.

Starbuck is one of a few volunteers who serve as eyes and ears on Spofford Lake for the Loon Preservation Committee, an organization dedicated to restoring the loon population throughout New Hampshire.

“So many of the lake’s residents are really relishing the loon family,” she said.

It took the loon pair seven years before they felt comfortable enough to make a nest, and they had their first chick last summer, Starbuck said.

Senior Biologist John Cooley of the Loon Preservation Committee said it’s not uncommon for loons to learn about and become familiar with an area before settling in to have a chick.

“If it’s a pair of loons inexperienced in breeding, it could take a few tries to get the perfect nest set,” Cooley said. He added that loons — which can live 20 to 30 years — invest a lot of time gaining knowledge of a place, which slows down their reproduction rates. The average loon pair will raise only one chick to fledgling age once every two years, according to the Loon Preservation Committee’s website.

The birds, with their black-and-white feather pattern and red eyes, are striking to look at, but it’s important that boaters and swimmers stay at least 150 feet away from them, Starbuck said.

“Bring binoculars or a telephoto lens,” she advised. “But keep your distance.”

Boaters also need to exercise extra caution as the chick — which is only 5 or 6 inches — can be extremely difficult to see, especially when it’s on its own while the parents are diving for food, Starbuck said.

Cooley explained that a number of factors brought the species to the brink of endangerment in the 1970s, including people hunting the bird for sport and loons getting lead poisoning from fishing tackles.

Though loon hunting doesn’t pose nearly as big a threat as it did in the early 20th century, lead poisoning continues to harm the population today.

Meanwhile, recreation and development near lakes have also long been a problem for loons.

“[With] the loss of shoreline to human development, it’s just harder to nest and raise young as a loon — that’s only gotten worse for the loons,” Cooley said.

Climate change is a newer threat to loons, he added. Increased temperatures can stress the birds on the nest, or excessive rain can flood the nests.

Despite the grim forecast for loons, there is some cause for optimism, Cooley said.

“It’s sort of a beacon of hope to see ... loons become established on Spofford Lake, and [to see] how we manage the balance between humans and loons there — it’s super exciting.”

And from putting up ropes around the nesting site to waiting excitedly for the chick to arrive, Starbuck said the loon family has been a point of connection for the humans of the lake community.

“So many of the lake residents have come together to love, embrace and protect them,” she said.

The lowdown on loons

The lowdown on loons