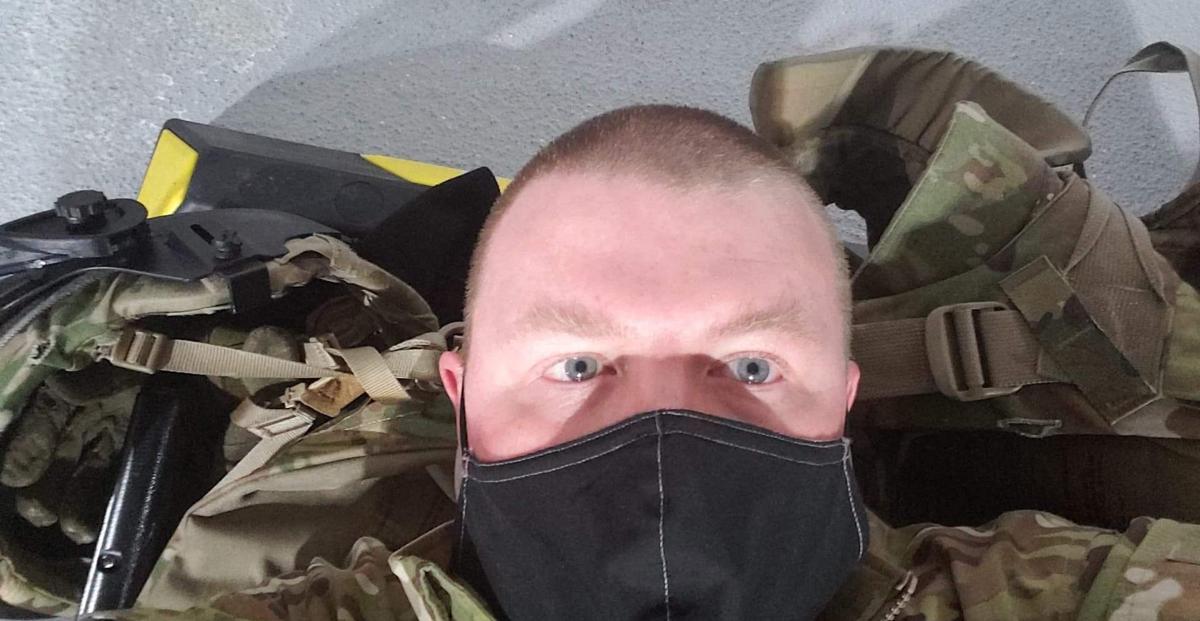 Sgt. CJ Pride took a selfie while lying on the pavement at the parking garage in Washington, D.C., where National Guard soldiers were made to stay after the inauguration. Pride was there prior to the inauguration, when he said the garage was used as “a staging area.”

Sgt. CJ Pride poses for a selfie in Washington, D.C. 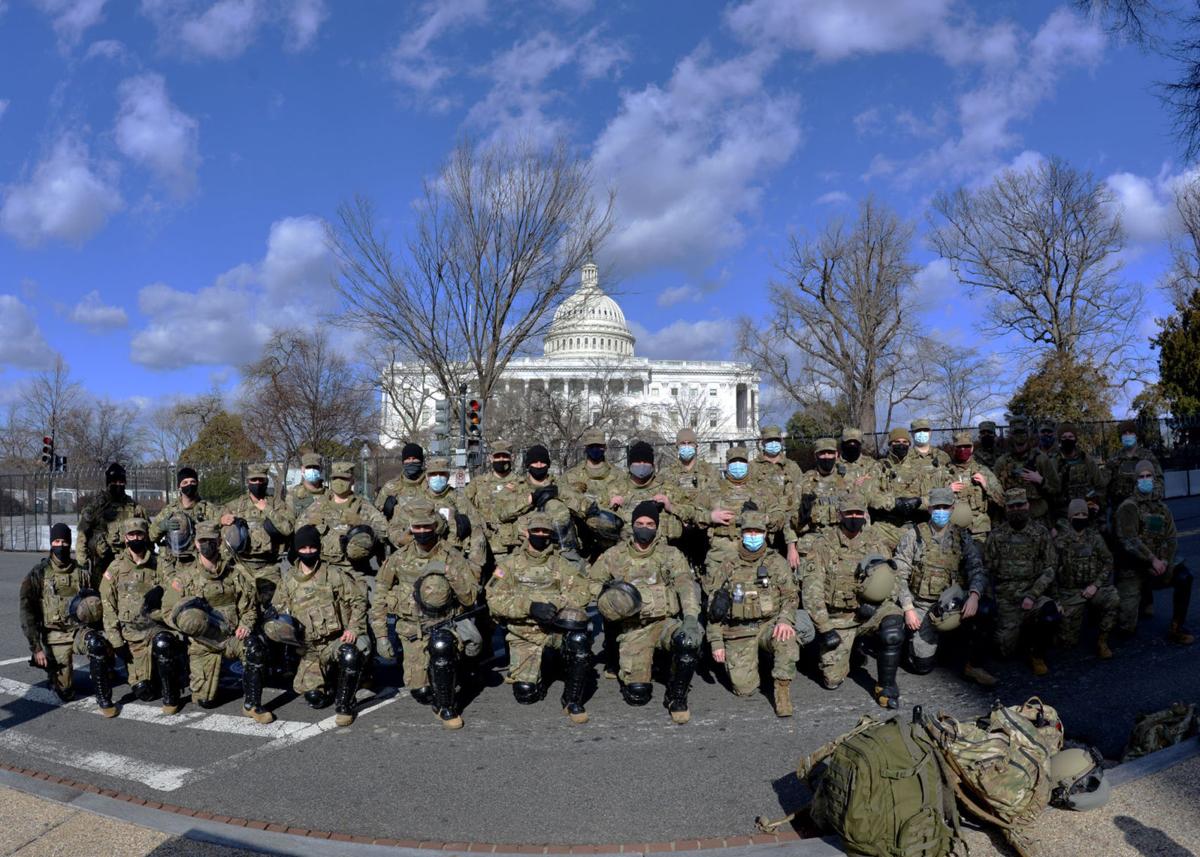 Sgt. CJ Pride, pictured in the center of the second row wearing a gray mask, was one of more than 26,000 National Guard soldiers to come to Washington, D.C., for the inauguration of President Joe Biden.

Sgt. CJ Pride poses for a photo in the Chinatown district of Washington, D.C.

Sgt. CJ Pride took a selfie while lying on the pavement at the parking garage in Washington, D.C., where National Guard soldiers were made to stay after the inauguration. Pride was there prior to the inauguration, when he said the garage was used as “a staging area.”

Sgt. CJ Pride poses for a selfie in Washington, D.C.

Sgt. CJ Pride, pictured in the center of the second row wearing a gray mask, was one of more than 26,000 National Guard soldiers to come to Washington, D.C., for the inauguration of President Joe Biden.

Sgt. CJ Pride poses for a photo in the Chinatown district of Washington, D.C.

The past 12 months have been chaotic for most people, but between the pandemic and months of political unrest, members of the U.S. National Guard have been especially busy.

Keene’s Sgt. CJ Pride is one of those service members. In the spring, he was called on to help New Hampshire in its COVID-19 contact tracing efforts. And last month, he was sent to help secure Washington during the inauguration of President Joe Biden, just two weeks after a violent mob stormed the Capitol building.

The 41-year-old father of two girls and a stepson said it’s been quite a year, but that he’s glad to have had an opportunity to serve his country and his state.

“It’s been a crazy year and I have to say I’m thankful that I’m getting to play a role in our response to everything that’s been going,” Pride said in an email. “I wouldn’t have been able to do it without my faith in God, my wonderful wife Kate, and my children and parents.”

Pride has been an area resident for most of his life, having attended Monadnock Regional High School before transferring to the Cushing Academy in Ashburnham, Mass. Today, he lives in Keene with his wife, daughters Abby and Ava and stepson Hayden Carpenter. Pride also works as a special education paraeducator at Brattleboro Area Middle School and in the summers, he’s a sous chef at Camp Brookwoods on Lake Winnipesaukee.

In fact, when he first enlisted with the National Guard in February 2001, Pride says he signed up to be a cook, but his unit restructured, and he eventually retrained as a plumber and pipe fitter. He’s been with the same unit — the 160th Engineering Company — since he signed up at the age of 21, and said he originally saw the National Guard as a means of furthering his education.

“I joined the Guard ... mostly to help pay for college,” he wrote. “9/11 occurred a few weeks after I had finished my initial training and 4 days before my first drill. That really changed my thinking about my service from a way to pay for college, to really viewing it as serving my country and community.”

He is currently attending Granite State College, where he is working on a degree in social studies and special education.

Pride’s two-decade journey with the National Guard has taken him around the world. He said his unit served in Afghanistan for a year during 2004 and 2005, and also trained in El Salvador, Germany, Poland, as well as in other parts of the U.S. Before COVID-19, Pride’s unit responded in-state to floods and also the ice storm of 2008.

In April, about a month after the COVID-19 pandemic began in earnest in New Hampshire, Pride was called to Concord to assist the N.H. Department of Health and Human Services in tracing those who’d had contact with people who’d tested positive for the virus. He said his job was to update information about each new case and assign each patient to an investigator for tracing.

“I lived in a hotel room that time and while it wasn’t bad, it gets old pretty quickly,” Pride said. It could get “a bit overwhelming at times, seeing all those cases come in every day,” he said, while noting that more recent case rates have been much higher than what he was dealing with in the spring and summer.

And he acknowledged that his job was far from the worst. Other National Guard soldiers, he said, were tasked with manning the call center for unemployment claims, which was inundated with calls during the early weeks of the pandemic. Others administered COVID tests to residents at assisted-living facilities, which have been hit especially hard by the virus.

Then, after the Jan. 6 insurrection at the U.S. Capitol, National Guardsmen from throughout the country were called up to stand guard in Washington, in case anyone was planning a follow-up attack during Biden’s Jan. 20 inauguration. Pride was among them, and on Jan. 16, he headed to the capital, where he stayed until Jan. 23.

“We were of two minds heading down,” Pride said in his email. “On one hand, with 26,000 troops showing up, you’d have to be insane to try anything. On the other hand...stuff happens. We aren’t military police or infantry, but we trained our butts off learning riot control tactics and use of force just in case things [went] sideways.”

Throughout his time in D.C., he said, there was a “sustained level of stress” that something might happen. And there were communication and planning challenges that Pride said were to be expected with so many units all coming in simultaneously.

Pride said he was in “the infamous parking garage” — where many National Guard soldiers were forced to stay, sparking public outcry — but only for a few hours. On Inauguration Day, he said he was part of a “quick reaction unit” that was on standby from 3 a.m. until midnight in the cafeteria at the U.S. Department of Agriculture building down the street from the Capitol.

After that, they guarded the nearby Capitol Power Plant until receiving word to come home.

By early February, just a couple of weeks later, Pride was gearing up for his next COVID-related assignment.

This time, he has been stationed closer to home. Pride said he’s been working at Keene’s vaccination site since last week and that it looks like he’ll be there a while. He said he anticipates this assignment will last for at least a few months, and that his service with the National Guard will last longer.

“I look forward to continuing serving our community and nation into the spring at least,” he said. “I’m eligible for retirement at the end of this month, but I really don’t see myself leaving the guard just yet.”

Mia Summerson can be reached at 352-1234, extension 1435, or msummerson@keenesentinel.com