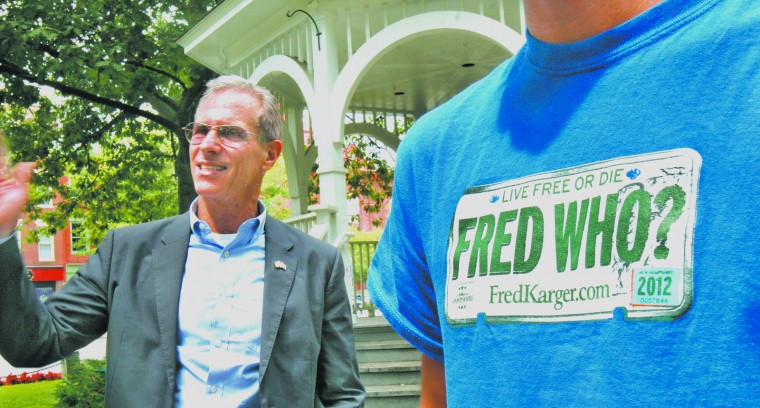 Presidential candidate Fred Karger speaks to a group of young people gathered on Central Square in Keene in August. His group of campaign volunteers wore shirts asking “Fred Who?” 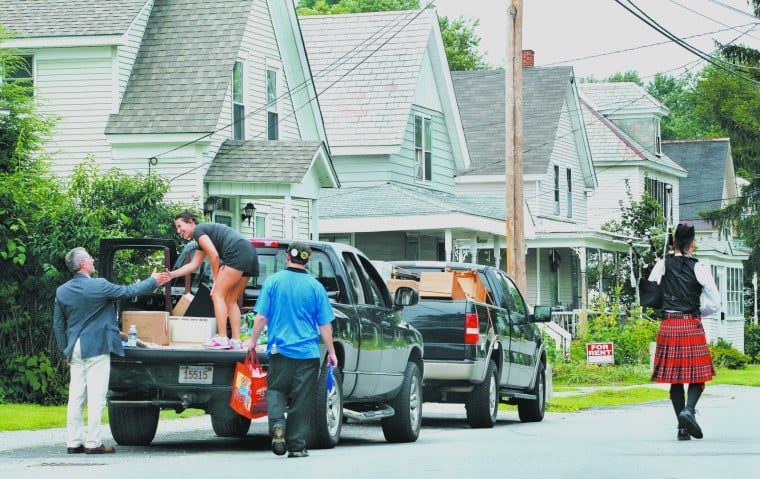 Presidential candidate Fred Karger speaks to a group of young people gathered on Central Square in Keene in August. His group of campaign volunteers wore shirts asking “Fred Who?”

“Hey! This is Fred. He’s running for president,” one of the campaign staff members said, gesturing toward the smiling, silver-haired man standing on the sidewalk.

Fred who? That’s what many Republicans may ask themselves after they meet openly gay and socially progressive candidate Fred Karger.

A long-time political operative who was a campaign aide to Ronald Reagan, and a lifelong Republican who has never held elected office, Karger has decided to toss his hat into the very full ring of candidates vying for the Republican presidential nomination.

Karger, a comparatively unknown candidate, has set out with abandon to make a name for himself by personally knocking on doors and introducing himself.

Karger was in Keene Saturday afternoon doing just that — walking through neighborhoods with his blue-shirted team, talking to residents and handing out Frisbees emblazoned with his slogan, “Fred Who?”

“It’s a great opportunity for me to hear the issues that people are concerned about and answer any questions they have for me,” Karger said. “And it gives them an opportunity to get to know me and my platform.”

That platform, centered around gay rights, is not typical of a Republican candidate. But that’s precisely why he’s running.

“I think the Republican party is so out of touch with the public,” Karger said. “The party has moved so far right and I think a lot of people feel, as I do, that the party has let them down. What I’m trying to do is change things and shake things up.”

As the first openly gay candidate to run for president, Karger is hoping to create conversations about gay rights and make it easier for young gay Americans to run for office.

“Somebody has to be the first, so why not me,” Karger said. “I tested the waters at a few colleges in New Hampshire and Iowa, and the responses I got from young people were so moving to me that I knew I needed to do this.”

As Karger stood in Central Square speaking with residents, a group of teenagers showed enthusiasm when they learned of Karger’s stance on marijuana — that it should be legalized — as well as on gay rights, reproductive rights and lowering the voting age.

“This is pretty typical,” Matt Hammond, 23, an intern on Karger’s campaign, said. “A lot of the social issues interest the younger voters. And, I mean, how many people really get to meet a presidential candidate.”

Karger headed out, his team in tow, weaving through the streets between Washington Street and Court Street, all the while being led by a bagpiper.

“It draws people out of their houses, and it’s something different,” Karger said. “In New Hampshire, that’s important because it’s hard to find something that hasn’t been done while campaigning.”

Most residents the crew encountered reacted positively to Karger’s efforts, saying they’ve never seen a candidate take such a personal approach before.

“I’ve never heard of him before, and I try to follow politics pretty closely,” Keene resident Jennifer Miller said. “I will definitely check him out. He took the time to come out here and meet people, and that’s a nice, personal, non-grandstanding thing to do.”

Karger’s full-time research assistant Kevin Miniter said Karger’s personal approach is part of why he got involved in the campaign.

Resident Celine LaChance said this was the first time that she has encountered a candidate campaigning door to door.

“I think it’s cool that he’s presenting himself. A lot of candidates don’t come knocking on your door,” she said. “He’s getting people’s attention.”

Susan MacNeil, the executive director of AIDS Services for the Monadnock Region, said Karger is a breath of fresh air in the political arena.

“No candidate has done what Fred is doing,” she said. “He is the only one talking about equality for all citizens. No one else is talking about gay rights or AIDS issues.”

MacNeil said Karger is tapping into a pool of voters who have been largely ignored by other candidates and want to be heard.

“I think the likelihood of Fred winning the nomination is slim,” she said. “But what matters is that he’s having a conversation that no one else is having, and he’s serious about it. I admire his courage.”

Christina Braccio can be reached at 352-1234 extension 1436, or cbraccio@keenesentinel.com.