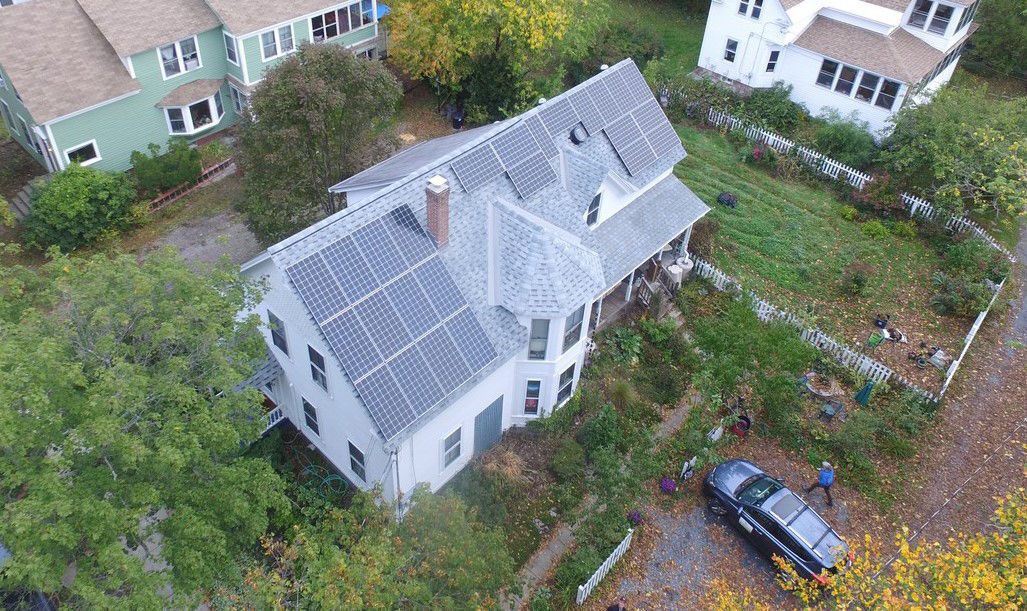 An upcoming virtual tour will feature Keene homeowners sharing information about their experiences with solar energy. This shot offers a view from above Michele Chalice’s house. Below, Chalice points to the array on her roof. 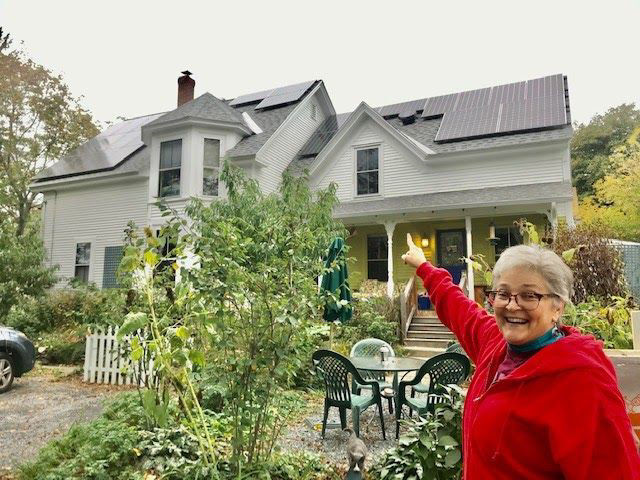 An upcoming virtual tour will feature Keene homeowners sharing information about their experiences with solar energy. This shot offers a view from above Michele Chalice’s house. Below, Chalice points to the array on her roof.

Local homeowners who generate their own solar energy are participating in a “virtual tour” put together by a grassroots group in recognition of National Energy Awareness Month.

The tour, which will go live Oct. 20, will feature Keene residents sharing information about their experiences with solar energy, along with photos and aerial imagery of the systems they’ve installed at their homes, according to a news release from the Keene-based Clean Energy Team.

Nancy Gillard, a spokeswoman for the group, said the tour will serve as a resource for people who are interested in learning more about solar arrays, how to install them and what incentives exist to help. It will include a series of photographs for each of the 16 participating homes, as well as a Q&A with the owners about why they decided to install solar panels and how they went about it.

“There’s diversity of how they did it,” Gillard said Monday. “Some are ground-mounted, some are on the roof, some are large, some are small. Some provide energy for businesses; it’s neat in that way.”

She said the tour will be announced during a forum the city of Keene will host the same day to discuss how it plans to meet its sweeping energy goals. Keene’s aim is to have the city and all the residents and businesses within it switch to 100 percent renewable sources for electricity by 2030 and thermal and transportation energy by 2050.

The Clean Energy Team is made up of Keene residents, business representatives and other community leaders who support making renewable energy options more accessible. The group of volunteers works to connect regional and state organizations that are interested in taking action to broaden access to these technologies.

Each of the 16 homes in the tour gets at least 60 percent of its energy via solar arrays, the release says. All of their owners reported lower costs, and at least 10 produce enough power to cover all of their electricity requirements. Between them, the homeowners have more than 350 panels, ranging from 14 to 40 panels on each home.

One of the homeowners, Michele Chalice, has installed 27 solar panels, which not only meet all her electricity needs, but also heat her home — she switched her predominant heating source from oil to electric. According to the release, Chalice’s electricity bills have been significantly reduced.

“I love that our Eversource bills have been less than $14 per month for the past two years,” Chalice said in the release. ”And our energy use is dramatically less-dependent on burning fossil fuels.”

She has also installed Solatubes, devices that can light up a room by reflecting sunlight from the roof through a series of prisms.

Another homeowner participating in the tour, Ruth Sterling, said in the release that residential solar installations can make an impression on others.

“My son believes that setting a good example is the biggest benefit so far,” she said. “He says the kids coming out of Franklin School see our house, see the panels, and can grow up seeing renewable energy possibilities.”

Gillard said the original plan was to set up a walking or biking tour of the houses, with signs in front providing information about their solar installations. However, due to the pandemic, the Clean Energy Team decided against it.

“We didn’t want to promote something where homeowners felt that they have to take questions and come out and greet people,” she said.

A link to access the tour will be posted online at cleanenergykeene.com/2020/10/02/energymonth.