This section of the Main Street median in downtown Keene has a new look after ash trees believed to be infested with the emerald ash borer were removed on Wednesday morning. The city plans to replace the trees with a different species. 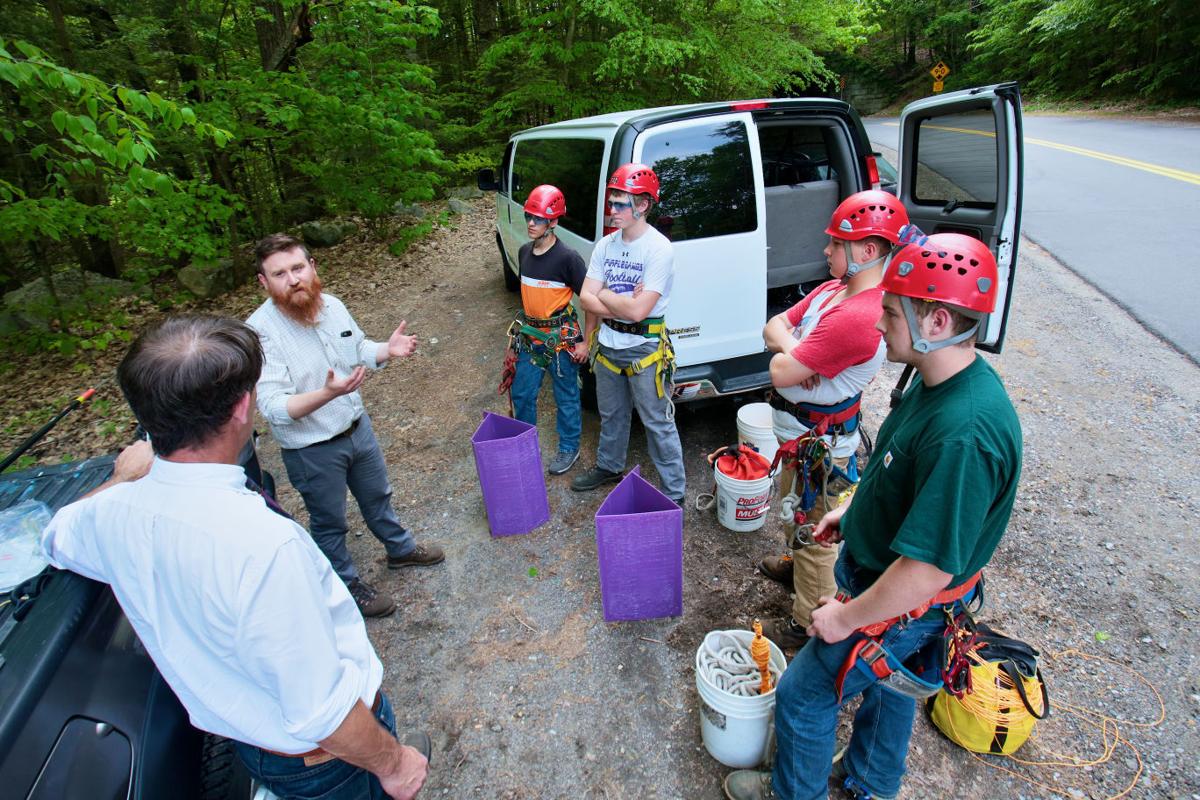 Keene High School students worked with Steven S. Roberge of the UNH Cooperative Extension to examine emerald ash borer traps in Keene and Peterborough, as shown in this file photo from May 2016. The traps do not encourage the beetles to invade the area, but simply catch them if they are there.

This section of the Main Street median in downtown Keene has a new look after ash trees believed to be infested with the emerald ash borer were removed on Wednesday morning. The city plans to replace the trees with a different species.

Keene High School students worked with Steven S. Roberge of the UNH Cooperative Extension to examine emerald ash borer traps in Keene and Peterborough, as shown in this file photo from May 2016. The traps do not encourage the beetles to invade the area, but simply catch them if they are there.

The loss of 17 trees in downtown Keene to the emerald ash borer this week is a stark reminder that the non-native insect is here to stay.

And as with the Dutch elm disease that overtook the region in the decades following the Hurricane of 1938, it’s not so much a question of if area ash trees will succumb to the infestation.

“I view this as the Dutch elm disease of our generation,” Steven S. Roberge, state extension forestry specialist with the University of New Hampshire Cooperative Extension, said Thursday. “If you have an ash tree, chances are it will be infested at some point; it’s just a matter of when.”

Emerald ash borer is a beetle from Asia that has no predators, according to NHBugs, a website managed by the cooperative extension in partnership with other state and federal agencies. It colonizes and then kills ash trees, including white ash, green ash and black or brown ash, in three to five years, the website states. Signs and symptoms of an infestation include canopy dieback starting at the top one-third of the tree; increased woodpecker activity; removal of the outside bark from the tree, called “blonding”; splitting bark; the presence of larvae tunneling beneath the bark; D-shaped exit holes showing where the adult beetles left the tree; and sprouts growing from the roots and trunk with leaves often larger than normal.

The website notes that as a forest product, ash trees contribute more than $1 million annually to New Hampshire’s economy.

The emerald ash borer first appeared in the United States in 2002 in the Detroit area. It can spread naturally or with the help of humans.

In the areas of the state where infestations appear to be isolated, it’s likely the insects came on firewood brought in by humans, according to Roberge. But if the infestations are traveling from town to town, it’s likely through the natural spread of the beetle. As long as the insect has an ash tree to feast on, it will stay with that tree, he said.

It’s common for an infestation to go unnoticed for a long time, which he believes was the case for the trees on Main Street in Keene. He noted that he’s been hanging purple traps used to catch the beetle for a long time in the city and at Keene State College, and he never picked up anything.

“I have no idea how the bugs made it there,” he said.

However, he suspects that the insect is inhabiting trees in the neighborhoods surrounding the downtown, and those trees aren’t showing any signs or symptoms.

In a news release about the Main Street tree removal, Keene public works officials said the trees would be replaced with ones that aren’t susceptible to the insect.

But even other tree species have their threats given the kinds of tree pests and diseases that continue to emerge in the Northeast and across the country, Roberge said.

For example, oak wilt was first found in Wisconsin in the 1940s, according to the U.S. Forest Service. The disease, which is caused by a fungus disrupting the transport of water in oak trees, has been a problem in the Midwest for decades, but has been marching east in recent years.

Last year, the N.H. Department of Natural and Cultural Resources issued a news release asking people to be on the lookout for the disease in New Hampshire after outbreaks were reported in Albany and Long Island, N.Y.

So far, Roberge said, there have been no reports of oak wilt in New Hampshire, but it’s something forestry officials and the state continue to monitor. They also continue to track diseases and pests already in the state, the hemlock woolly adelgid, elongate hemlock scale and white pine needle damage, he said.

As for the emerald ash borer, Roberge said he has yet to see an ash tree that survived an infestation. There is a process that can preserve an infected tree involving the hiring of a licensed pesticide applicator, he said. However, he noted, if the dying tree could cause injury or damage when it falls, the owner should have it removed.

In a department Facebook post last week, Keene public works officials said they planned to begin monitoring and treating the other 22 ash trees on Main Street after the other trees were cut down.

This article has been changed to correct that the Asian longhorned beetle is not already in New Hampshire.