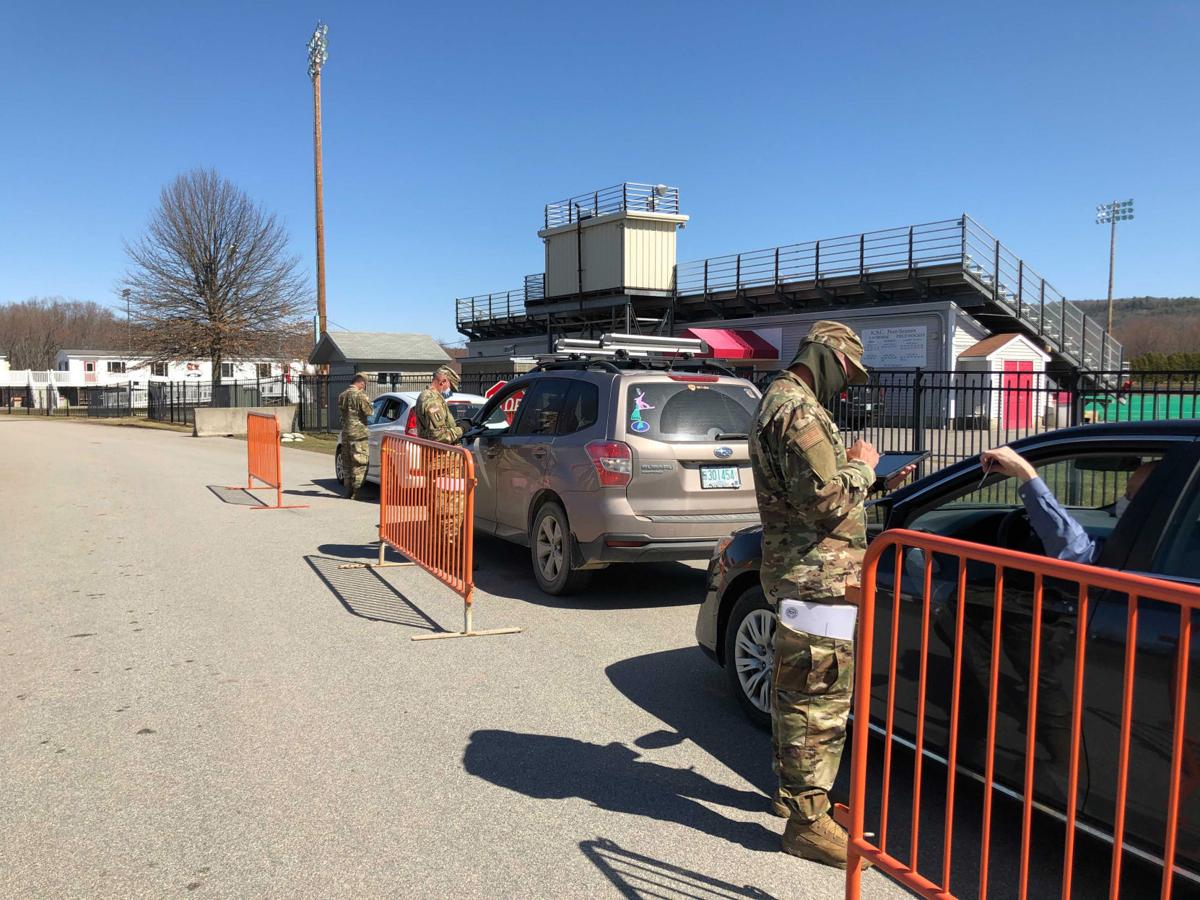 Members of the N.H. National Guard check people in at the vaccination clinic on Krif Road on Saturday. Below, Dawn Welshman, a volunteer at Krif Road, checks in Catherine Welch of Harrisville on Saturday. Bottom photo, volunteer Joan Punt of Walpole greets her Bernese mountain dog. 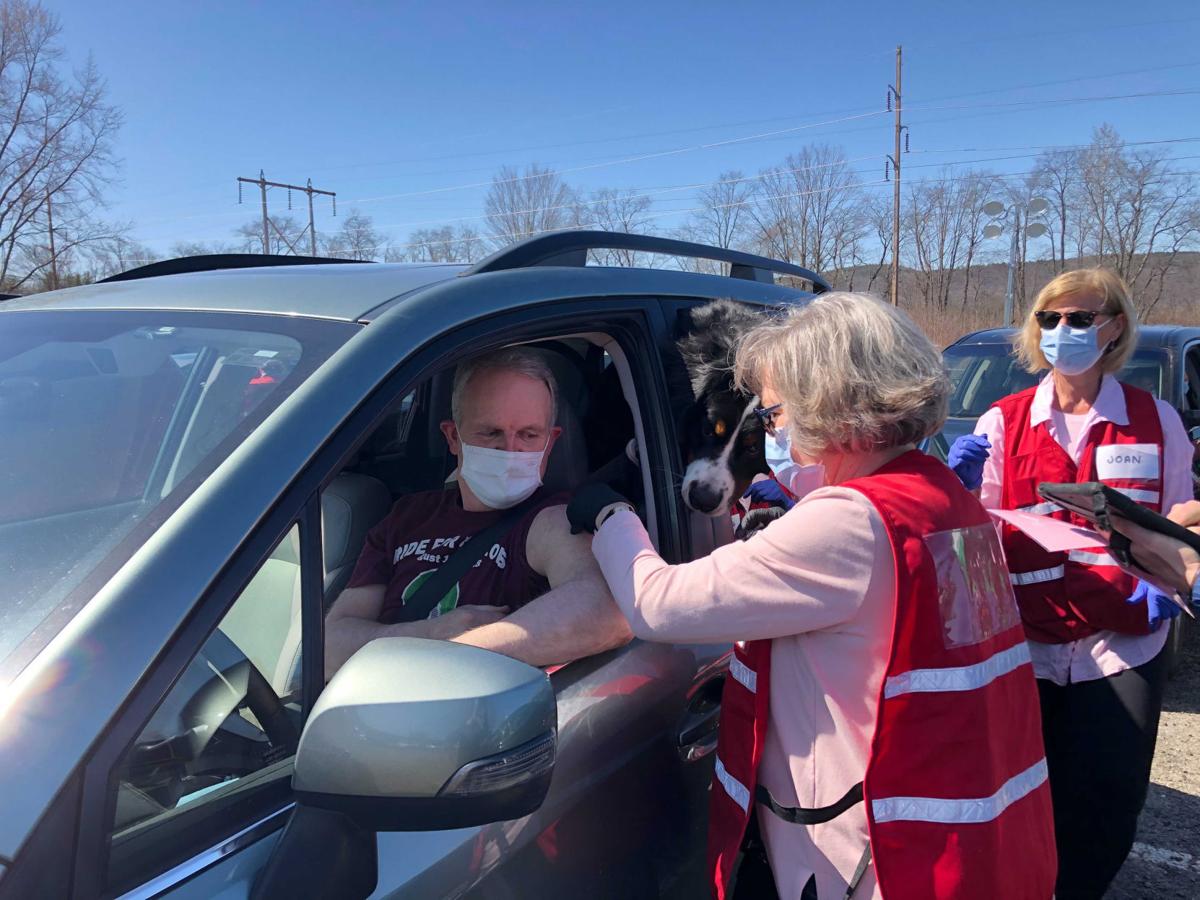 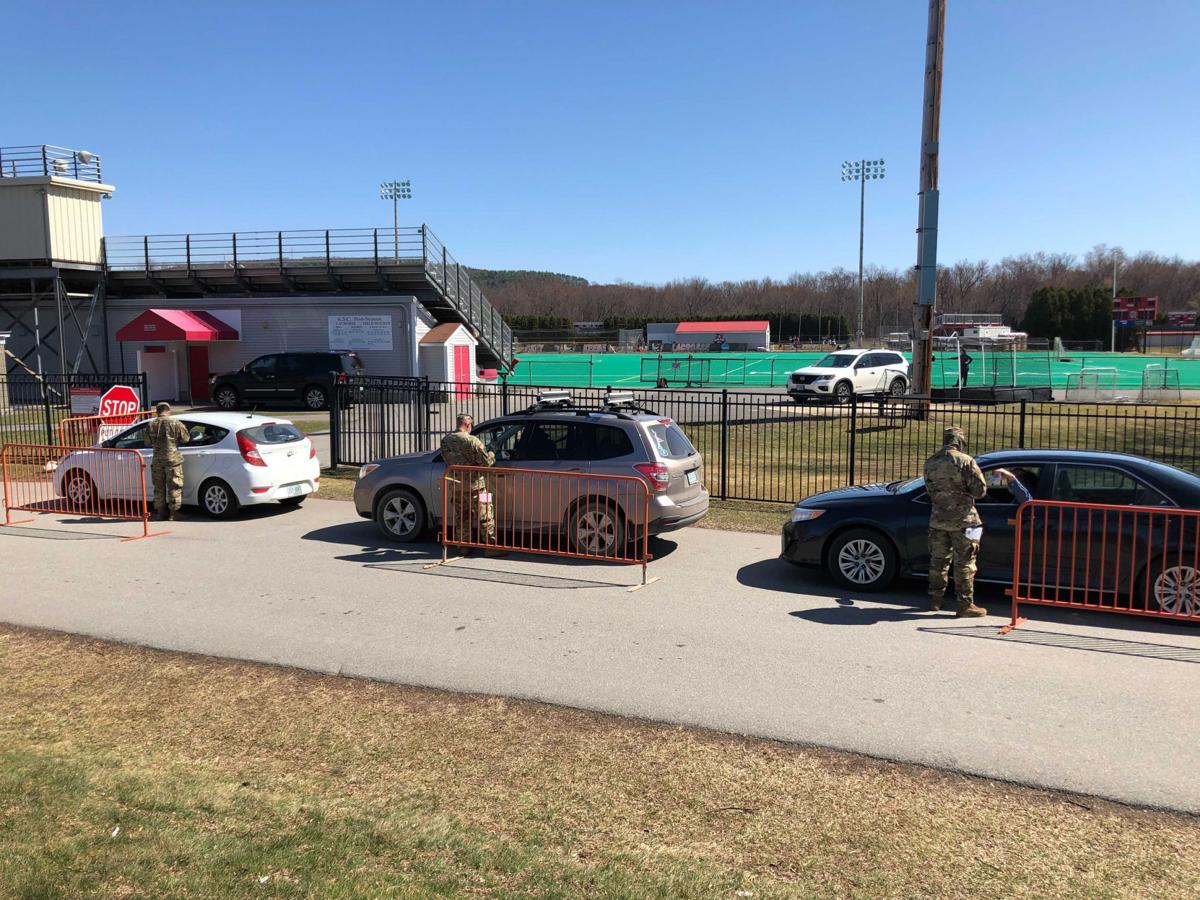 Members of the N.H. National Guard check people in at the vaccination clinic on Krif Road in Keene on Saturday. 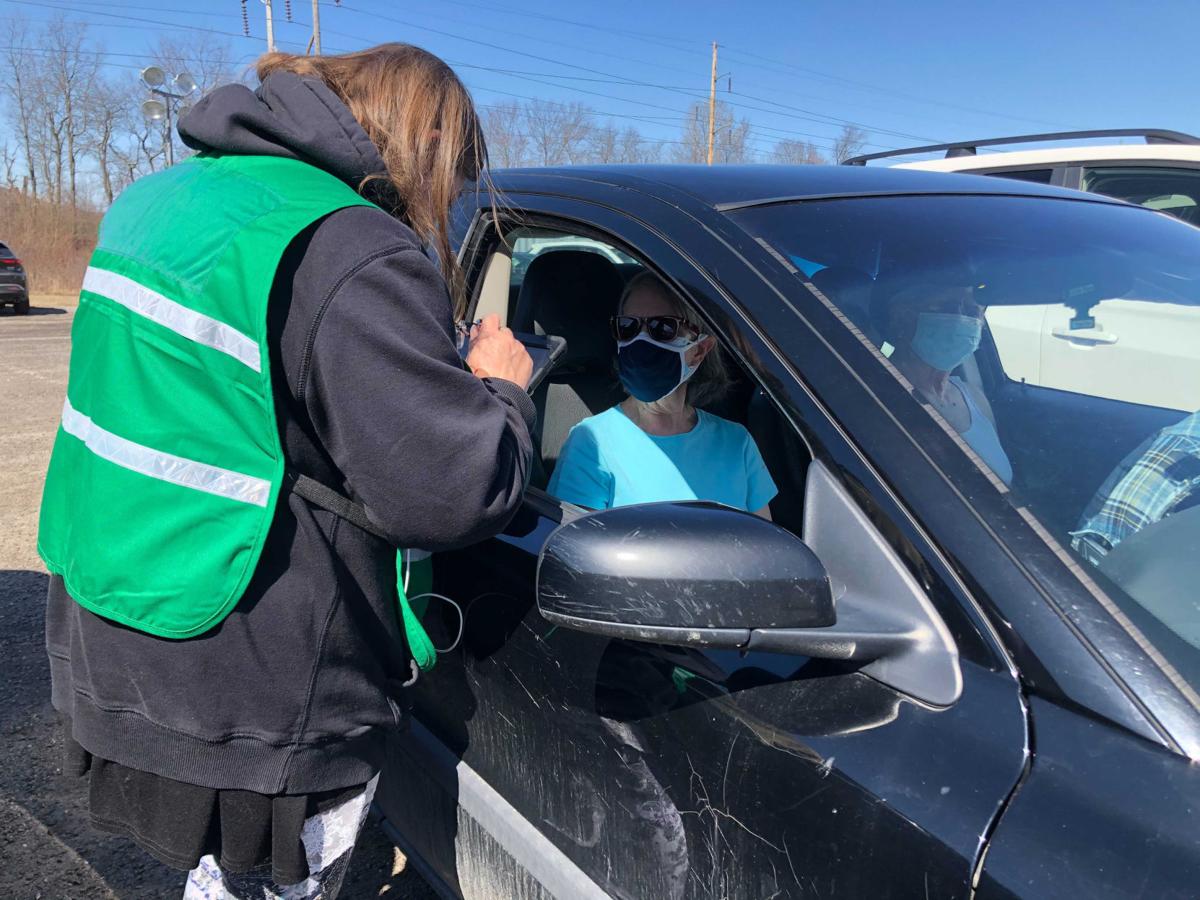 Dawn Welshman, a volunteer at the Krif Road vaccination site in Keene, checks in Catherine Welch of Harrisville on Saturday. 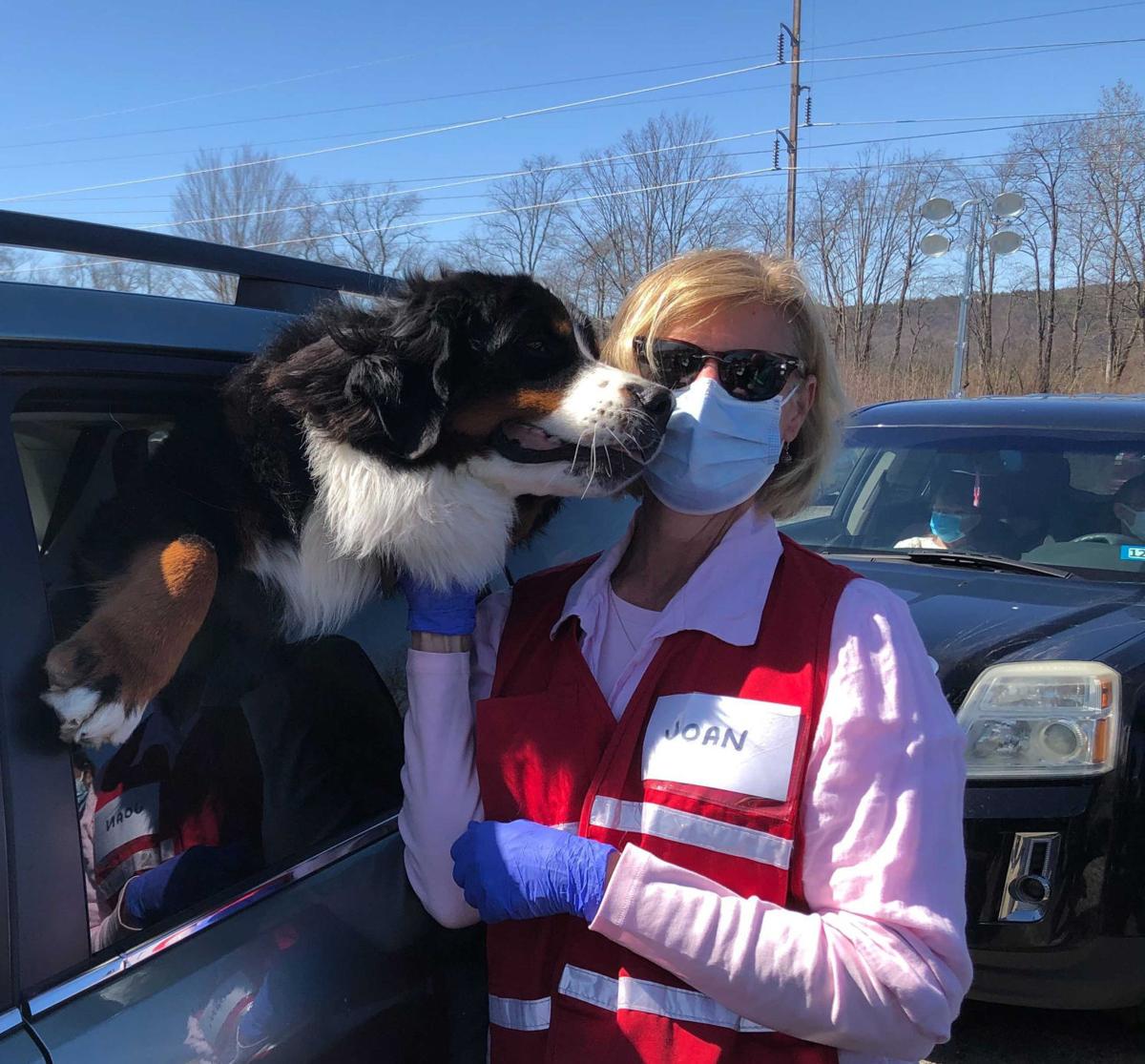 Joan Punt of Walpole, a volunteer at the COVID-19 vaccination site on Krif Road in Keene, greets her Bernese Mountain dog, Henry, as Punt’s husband, Jay, is vaccinated.

The COVID-19 vaccination site on Krif Road in Keene continues to hum along, despite recent logistical challenges, as the state prepares to open registration to all adults this week.

Tricia Zahn, director of the Greater Monadnock Public Health Network, one of 13 public health networks leading New Hampshire’s vaccination push, said the drive-thru site in Keene administered 1,457 doses Wednesday — the most it has given since opening in late December.

“It’s been a milestone week for us,” she said Saturday.

People arriving early for their appointments created a bottleneck at times last week — one of several factors that Zahn said caused some people to wait at the site for more than two hours.

Workers on site, who include N.H. National Guard members, medical professionals volunteering to give vaccines, first responders and non-medical volunteers, have also been slowed by a recent software shift, she said.

Some vaccine recipients registered in a federal database, while others registered in a state-run system — known as the Vaccination and Immunization Network Interface, or VINI — that launched earlier this month. The two systems do not coordinate with each other, so workers must navigate between both of them to identify people arriving at the site. (They also briefly resorted to using paper records Monday when VINI slowed during heavy online traffic, according to Zahn.)

In addition, Zahn said the federal database, VAMS, did not let volunteers schedule people’s second appointments online when they received a first dose. That exacerbated delays when some people returned when administrators were not expecting them, she explained, since the state has told public health networks not to turn people away.

“Some days we’ve got lines out the gate,” she said. “ … Monday through Wednesday were rough.”

Zahn explained that shifting to VINI will improve the process; however, because scheduling the second appointment when people receive their initial dose should reduce confusion around when they are supposed to return, she said.

The Krif Road site now has at least 10 people administering vaccines at a time, she said, in addition to other volunteers handling check-in and a system to quickly request more help, if necessary. Zahn praised the National Guard troops — some of whom she said have been pulled from their families elsewhere in New Hampshire to work in Keene — and the volunteers “doing this out of the kindness of their heart.”

The volunteers include Karen Osgood, a Swanzey resident who works for an in-home senior care provider and signed up to work at the Krif Road site in January after getting vaccinated there earlier that month.

Osgood said that while she usually works at the vaccination site on Saturdays, she offered to help Thursday evening after seeing a long line of cars at the site. Despite occasional delays, she said most people are excited to receive the vaccine and treat the volunteers kindly. One woman gave Osgood and another volunteer bouquets of orchids Saturday.

Wait times at the Krif Road site Saturday were shorter than the two-hour delays last week, and vaccine recipients said the process ran without any significant hitches.

Catherine Welch, 77, of Harrisville complimented volunteers for managing a smooth operation. After getting her second dose of the vaccine Saturday, Welch said she looks forward to spending time with family members in northern New England whom she has not seen indoors during the pandemic.

Christine Bemis of Keene received her first dose of the Pfizer-BioNTech vaccine Saturday, which she said felt like a typical flu shot. (People are asked to wait in their parking spot for 15 minutes after getting vaccinated to make sure they show no adverse side effects.)

Bemis, 50, said she waited about an hour before getting the shot, showing the e-book reader she brought to pass the time. An analyst for Liberty Mutual Insurance in Keene, Bemis said she is excited to work in the company’s office again and also looks forward to feeling safer around unmasked strangers after getting her second dose.

“It would be nice to see people again,” she said. “That’s the major thing I miss.”

All adults in New Hampshire will be eligible to register for the COVID-19 vaccine by the end of this week, Gov. Chris Sununu has announced.

Sununu said at a news conference Thursday that everyone 16 and older should be able to get their first shot by Memorial Day.

Despite the expanded eligibility, Zahn said she expects the number of people getting vaccinated at Krif Road to stay “relatively steady” because the state has not announced plans to increase its vaccine allotment to the site.

Zahn added, however, that public health officials will continue to improve the process in an effort to reduce wait times further. She said people scheduled to receive the vaccine can help by arriving on time — not early — for their appointment, completing the pre-vaccination questionnaire in advance and having their identification ready upon arrival.

The state’s public health networks are also working to identify indoor sites for vaccination clinics, which would help them continue operations in inclement weather and reduce the need for additional personnel to manage traffic, according to Zahn.

She said an indoor venue would replace the existing outdoor site but cautioned that no plans have been finalized yet and that Krif Road remains the Greater Monadnock Public Health Network’s sole COVID-19 vaccination site. (Walgreens in Keene is also administering doses by appointment only.)

At the end of a busy week Saturday, volunteers were in positive spirits — encouraged by their work and a recent spate of warm weather.

Sally Garhart of Peterborough pointed to her blue jeans between administering vaccine doses, explaining that she had worked in snow pants earlier this year.

Garhart, who served as medical director of the Concord nonprofit N.H. Professionals Health Program — which offers health and work-related guidance to medical professionals — until retiring last month, said she volunteers at the Krif Road site about three days a week. Vaccine recipients are often just as cheery as the volunteers, she said.

“There have been some pretty long lines, but most people are upbeat because they see the light at the end of the tunnel.”