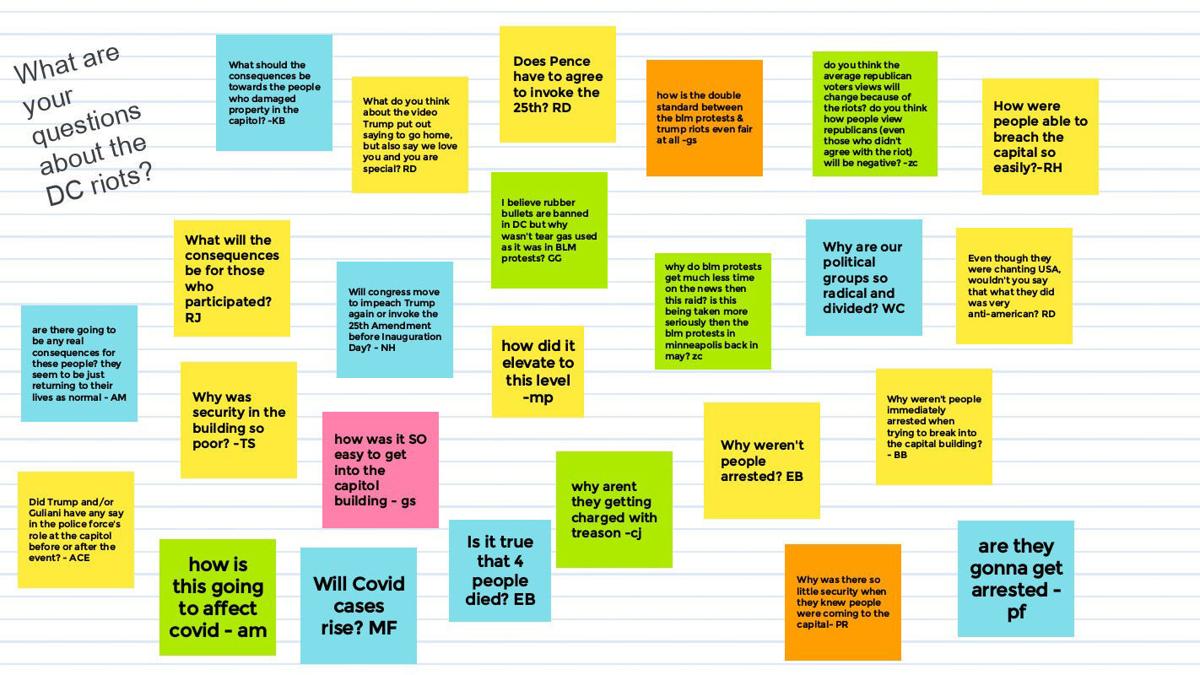 These questions, posed by Keene High School students on a virtual whiteboard, informed a discussion in Amy Chapman and

how they facilitate conversations about contentious current events.

These questions, posed by Keene High School students on a virtual whiteboard, informed a discussion in Amy Chapman and

how they facilitate conversations about contentious current events.

They didn’t get much beyond that.

“We had planned this whole lesson, and we literally only got to stage one: answering the questions,” Chapman said.

Students’ curiosities varied widely, from wondering why it was so easy for rioters to breach the Capitol on Jan. 6 and what sorts of consequences they will face, to broader inquiries like “Why are our political groups so radical and divided?”

Since Keene High School is still operating remotely, students posed these questions on virtual sticky notes, and the class discussion occurred over Google Classroom. But it still was an open and honest conversation, Perry said.

“Step one is to listen, and just to ask,” he said. “... We spent the entire time answering those questions, and having that discussion, and admitting, ‘I don’t know’ ” when they genuinely weren’t sure of the answer.

And as contentious issues — like the 2020 election, the COVID-19 pandemic and even Wednesday’s presidential inauguration — dominate national news, local teachers say this is the best strategy to remain ideologically neutral as they help students navigate these thorny topics.

“I would say we all started from a similar place, which is where we let the kids lead, and we ask for their understanding, and what sorts of questions do they have,” said Jodie Ballaro, who teaches world history at Keene High.

“They come in and ask, ‘What’s happening? Why is it happening?’ ... I try to be in the middle, and not have an opinion,” she said.

That can be tricky, Faloretti said, and it’s taken a lot of practice to maintain objectivity in the classroom when controversial topics arise. But, she added, letting students lead the way helps her chart a middle course.

“I’ve just gotten really good at giving the kids space to have the conversation, but I’m very clear with them that it needs to be a respectful conversation,” Faloretti said.

“I try and be like a neutral moderator, really, of what the kids are asking, what they’re saying — confirming the truth and facts, because kids are exposed to a lot of things they think are true, but they’re not,” Lambert said.

The omnipresence of misinformation and social media conspiracy theories leads to another challenge for teachers, but also another teachable moment.

“One of the first steps is to point out that that division, and those different truths, even exist,” Perry, the Keene High teacher, said. “So, just to acknowledge the fact, for [students], that we understand you’re coming from very different viewpoints ... but also we’re in a place right now where your sources of information are not just reinforcing your point of view, they’re designed specifically to feed that point of view, and to really narrow that point of view even more.”

“Regardless of what event happens, it fits into that same discussion,” he said. And ultimately, Perry added, conversations like this advance the end goal of education.

“Our job is not to make Democrats or Republicans, it’s to make critical thinkers that can actually decide for themselves,” he said, “and when historic moments happen, to be able to say, ‘What’s really going on here, and what direction do I want this to go, and why do I want it to go that direction?’ ”

“It’s always tough as a teacher to walk that line between presenting information and preaching from the pulpit,” she said. “It’s especially tricky now because we’re remote, so we don’t know who’s in the background, either.”

As a hypothetical example, fellow Keene High social studies teacher Bill Hope said, a student’s question about invoking the 25th amendment on former President Donald Trump, if overheard by a parent during a virtual class, could sound like a teacher was calling Trump mentally unstable and unfit for office.

“So that’s the kind of fine line that we have to walk a lot of the time,” Hope said.

Beyond staying neutral on controversial topics, teachers also say they have to model respectful dialogue to keep the sort of divisive rhetoric often seen on social media, cable news and even in Congress out of their classrooms.

“It really is about creating an environment in your classroom that is one of respect and understanding,” Chapman said.

Perry added that part of keeping divisiveness out of the classroom involves recognizing polarization in the media, and showing that to students. For example, he sometimes asks students to look at the websites for Fox News and MSNBC to see how their headlines frame national news differently.

“So it’s not necessarily avoiding it, it’s acknowledging it and saying, ‘Let’s look at this. Why does this divide exist? Who’s benefitting from the divide, too?’ ” Perry said.

Lambert, the Monadnock teacher, said that he hasn’t had much of an issue with students getting too heated during class debates. In fact, he said, students over the past five years or so have been the most politically engaged, but also the most respectful when approaching controversial topics. And that, he added, is cause for optimism.

“It does give me hope that no matter what their views are,” he said, “things are going to get better.”