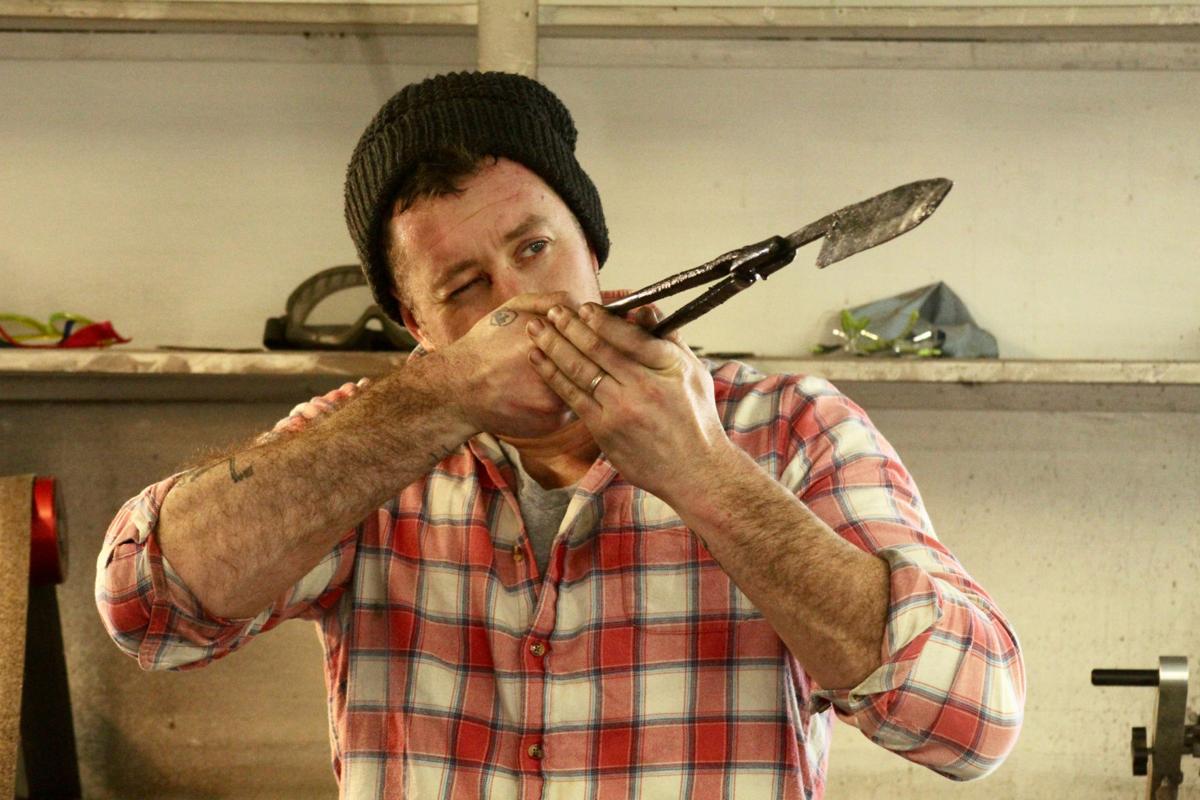 Kyle Farace, 34, of Brattleboro shows off a freshly sculpted knife at his blacksmithing shop, which he owns with his wife, Kaila Cumings, in Bellows Falls. 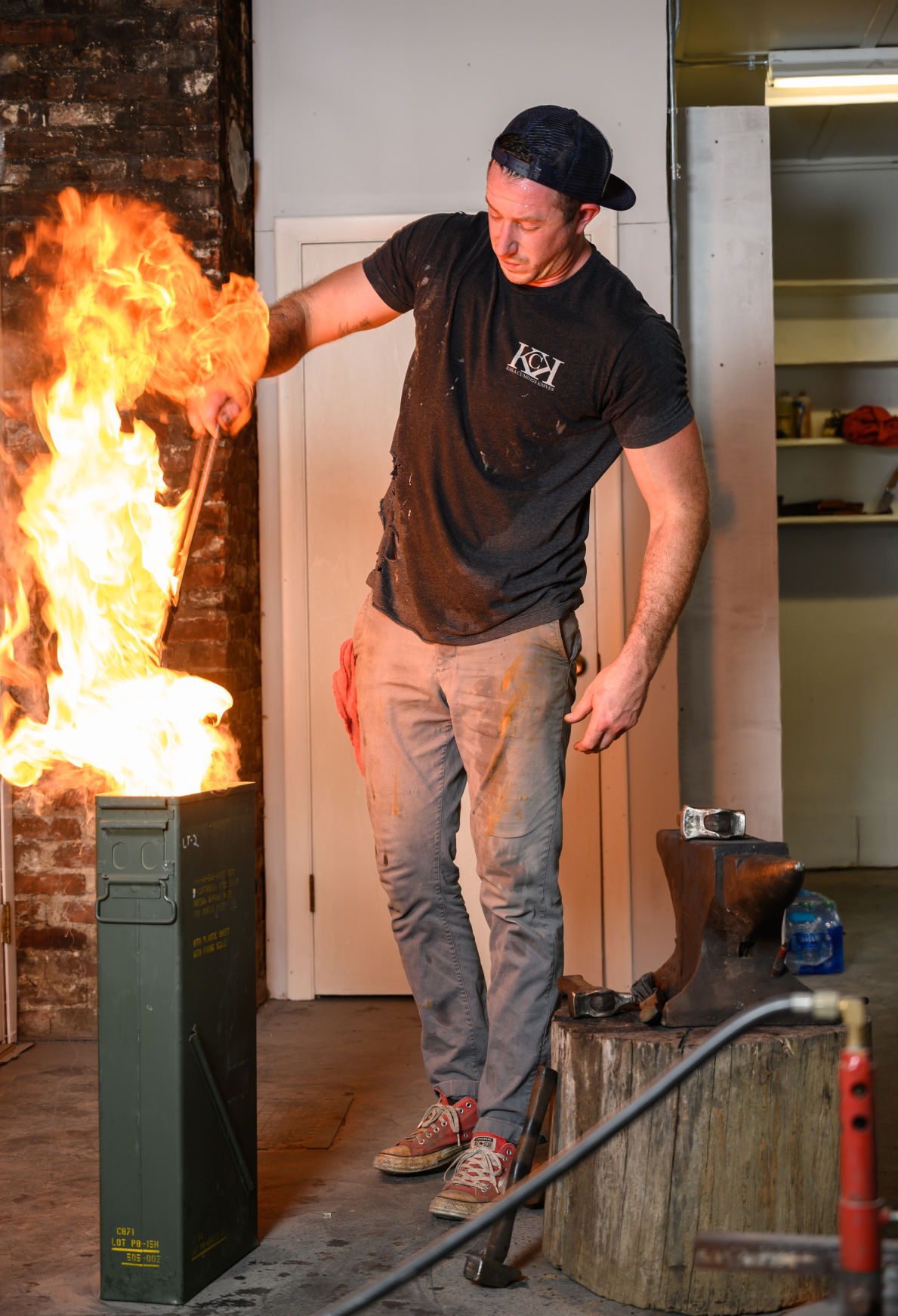 Shown in the Bellows Falls shop he shares with his wife, Kaila Cumings, Kyle Farace quenches a blade he had been working on. 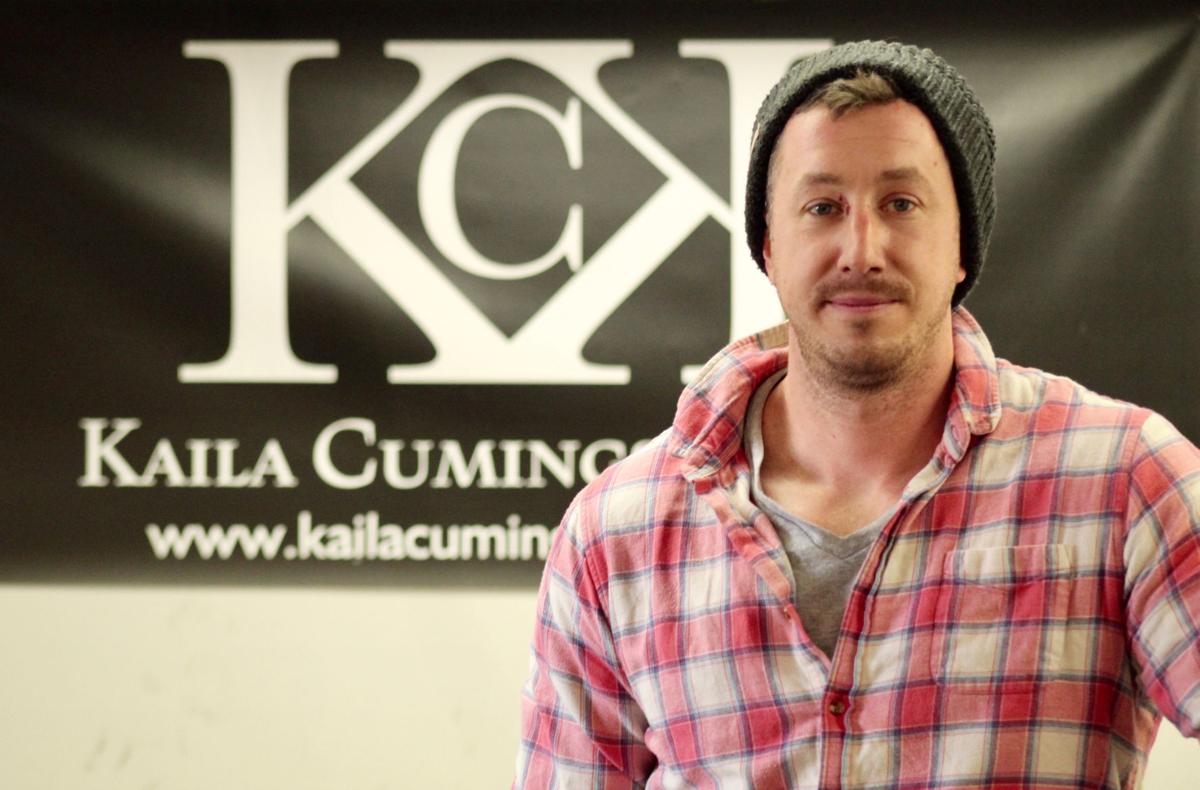 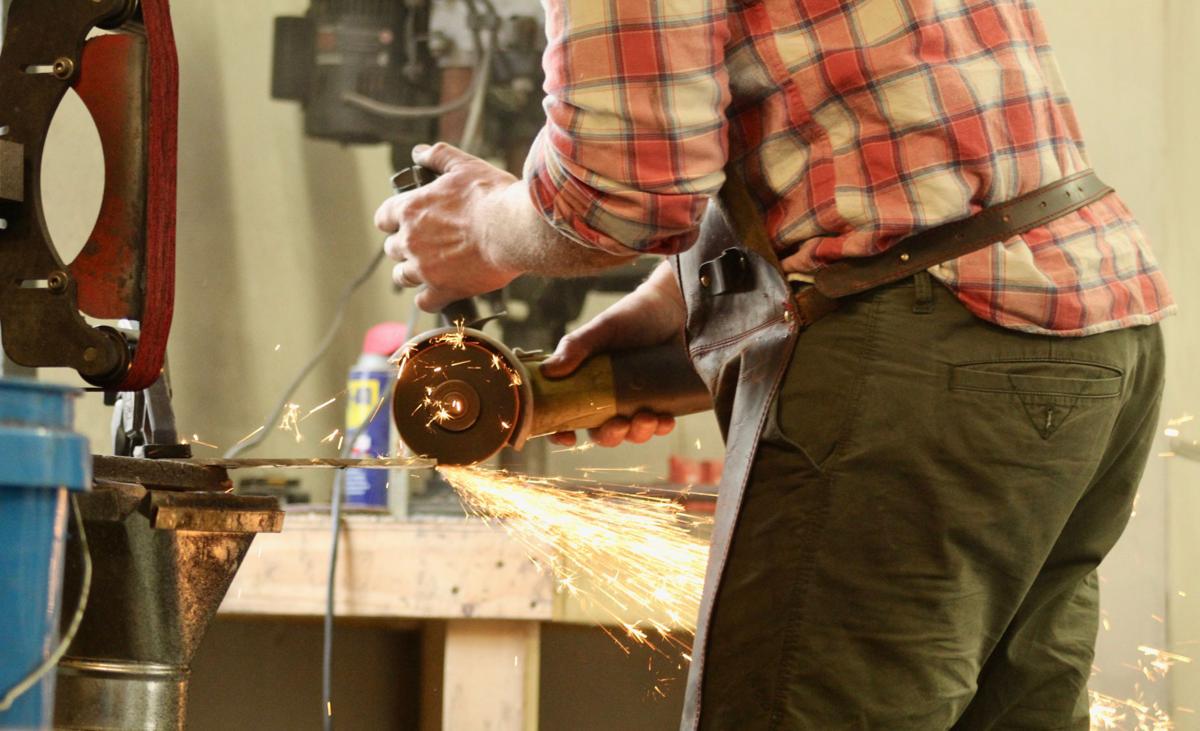 Kyle Farace, 34, of Brattleboro shapes a chef’s knife Thursday at his blacksmithing shop, which he owns with his wife, Kaila Cumings, in Bellows Falls. He recently competed on the History Channel show “Forged in Fire."

Kyle Farace, 34, of Brattleboro shows off a freshly sculpted knife at his blacksmithing shop, which he owns with his wife, Kaila Cumings, in Bellows Falls.

Shown in the Bellows Falls shop he shares with his wife, Kaila Cumings, Kyle Farace quenches a blade he had been working on.

Kyle Farace, 34, of Brattleboro shapes a chef’s knife Thursday at his blacksmithing shop, which he owns with his wife, Kaila Cumings, in Bellows Falls. He recently competed on the History Channel show “Forged in Fire."

BELLOWS FALLS — Kyle Farace has seen every episode of “Forged in Fire,” meticulously watching how the bladesmiths tackle the competition.

And as someone less than two years into the trade, the Brattleboro native never thought he’d be good enough to be on the History Channel show. Luckily for him, his wife, Kaila Cumings, did.

“I’ve had a lot of people out in my shop over the last eight years, and I’ve never seen someone pick up the craft so fast,” she said. “His first blade was 100 times better than mine.”

With that in mind, Cumings told her husband he’d be a perfect contestant for the show.

“Forged in Fire” challenges four bladesmiths to recreate historical edged weapons in a three-round competition. The winner, picked by a panel of celebrity judges, receives $10,000.

“I never imagined myself on the set of our favorite TV show,” he said.

Farace started blacksmithing as a hobby in 2018, with Cumings showing him the ropes at her shop, Kaila Cumings Knives, in Troy.

It wasn’t until July, when Farace was in between jobs, that he decided to make it a career, and the couple reopened the knives shop at a larger space in Bellows Falls.

The orders can range from a small hunting knife to a sword, but Farace said chef’s knives are his favorite to craft. To make those, he uses either 1084 hi-carbon steel, commonly used for kitchen knives, or Damascus, which is best for creating designs within the knife itself.

As far as the creative process goes, he said it depends on the intricacy of the order.

“I don’t normally sketch things out,” he explained. “I’ll just have an image in my head, and I’ll follow that as I shape the steel.”

His day typically starts at 5:30 a.m., and he makes about three to five knives per week. One day is usually set aside for the week’s forging — shaping a metal object by heating it in a fire, and then hammering it down — and then the rest of the week is spent grinding the knives, which perfects their shape.

“It’s really different every day, and that’s what’s cool about it, you know? It’s not some basic 9-to-5 job. It’s not monotonous like that,” he said.

Art was always an outlet for Farace, who said he has dabbled in various forms since he was a kid. His love for art stems from his stay-at-home mom, Debbie Eburg, who always told him to pursue his passion.

“She’s the one who really pushed the arts on me,” he said, “and has been a huge influence in that aspect of my life.”

After graduating from Leland and Gray Union Middle and High School in Townshend, Vt., Farace worked for several years with a glass artist in the same town before switching to blacksmithing.

He found the craft through Cumings, whom he met online in 2018.

“When I told him what I do for a living, he said he wanted to make a straight razor, so I told him to come out and we’d make one together,” Cumings said.

From there they started dating, and Farace said they tied the knot in August 2019 with wedding rings they forged together out of Damascus steel.

Aside from the fun of working with his wife every day, Farace said he likes the challenge that comes with blacksmithing.

“Before, I’d never done anything with metal, so I think it was just learning something new and being able to see how the metal moves that drew me to it,” he said.

And though Farace said he’s always had confidence in his artistic abilities, blacksmithing is a trade he said he still has a lot to learn about.

So when Cumings said he should be on “Forged in Fire,” he didn’t think much of it.

“I kind of brushed it off because I didn’t feel I was confident in my work as she felt about my work,” he said.

But Cumings — who Farace described as his biggest inspiration — signed him up anyway because she knew “he had an eye for forging.”

“Sometimes when we’re out in the shop,” she said, “I’ll catch myself stopping what I’m doing to watch him forge [because] it really is so mesmerizing watching him move steel.”

After a successful Skype interview, Farace headed to Connecticut in September to start filming.

The episode was filmed in roughly a week, Farace said, and due to the COVID-19 pandemic, each contestant had their own trailer on set and masks were required.

And while the pace of the show and the set itself were what he expected, Farace said the number of cameras was jarring.

“The set is exactly like how you see it on TV, but everything on the other side is just cameras,” he said. “You are trying to work, and you’re running around with a hot piece of steel, and you’re dodging camera guys.”

Still, he said he wasn’t nervous, even as the “underdog” of the episode. The other contestants, he explained, had at least five years of experience.

He also made sure to be as personable as he could while filming, a tip Cumings picked up from her two stints on the Discovery Channel’s “Naked and Afraid.”

That show has complete strangers meet while stranded in a dangerous, desolate location without food or water, and while completely naked. Each episode follows the pair as they attempt to survive.

“She just said your personality is everything ... if you want more air time, just own it,” Farace said.

“I just treated it like any other day in the shop,” he added.

Now a month later, Farace can’t say publicly if he’s won the competition. But he did say he would use his winnings for a down payment on a house.

Regardless, he said he was grateful he could show what he was capable of.

“I feel like a lot of reputable bladesmiths don’t try out for the show, [out of] fear that it could ruin their reputation if they don’t win,” Farace said. “For me, I had nothing to lose ... My goal was to at least make it to the final round, just to show Kaila that all her hard work and patience teaching me paid off.”

At a glance: Kyle Farace