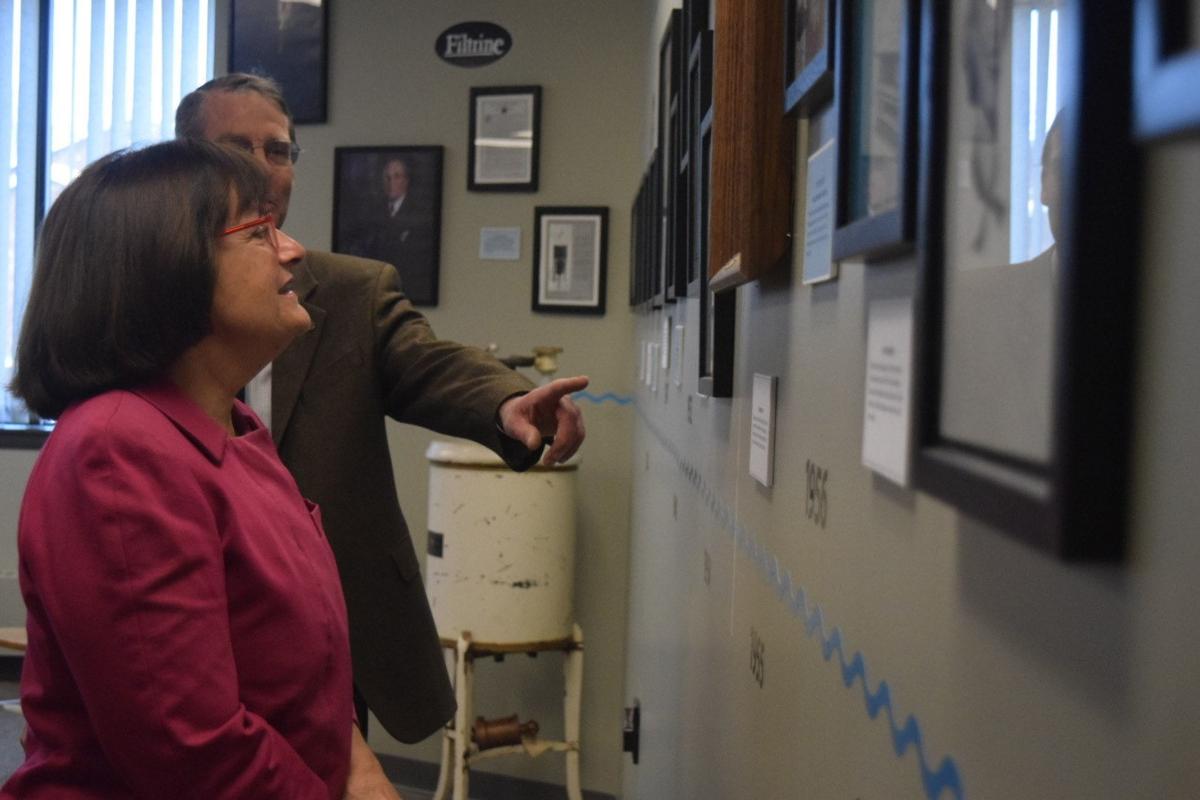 Congresswoman Annie Kuster, D-N.H., gets a tour of Filtrine Manufacturing in Keene from Peter Hansel, the company’s president and co-owner, Monday. 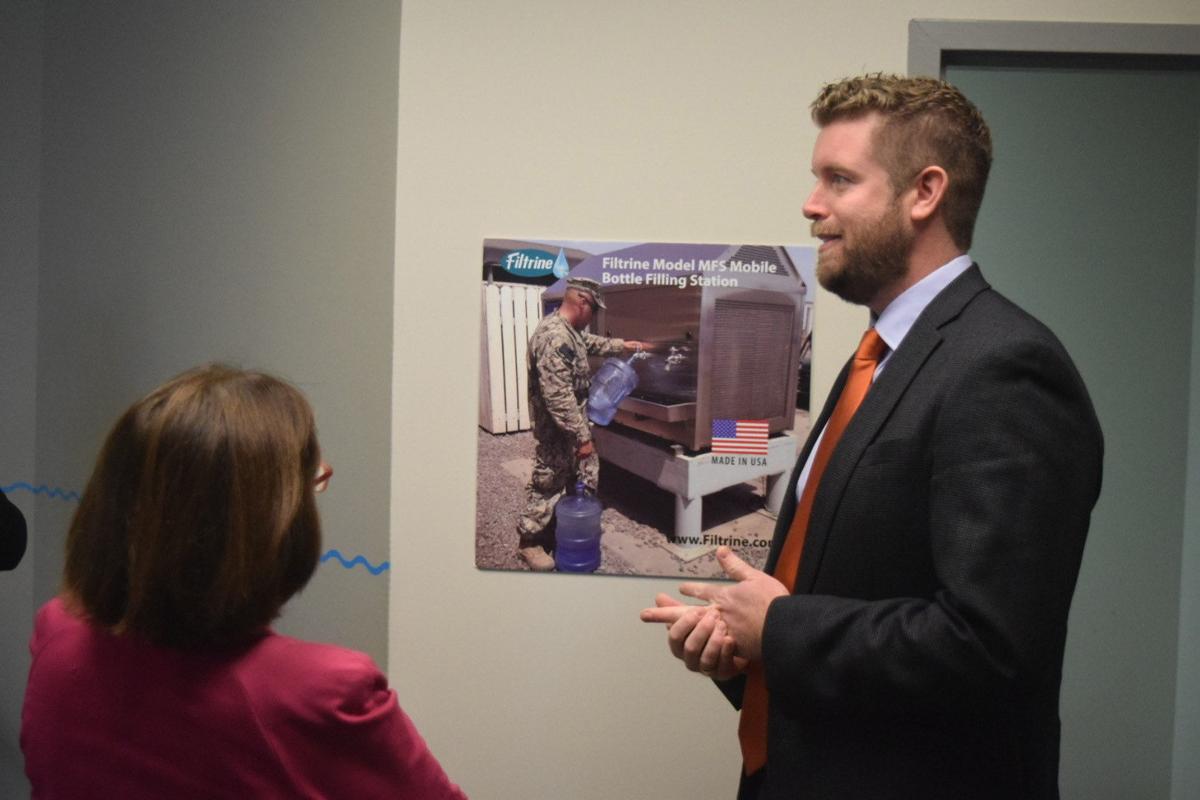 Keene Mayor-elect George Hansel shows Congresswoman Annie Kuster, D-N.H., a filtering system that the company he co-owns, Filtrine Manufacturing, sent to Djibouti, during a tour of the Keene business Monday.

Congresswoman Annie Kuster, D-N.H., gets a tour of Filtrine Manufacturing in Keene from Peter Hansel, the company’s president and co-owner, Monday.

Keene Mayor-elect George Hansel shows Congresswoman Annie Kuster, D-N.H., a filtering system that the company he co-owns, Filtrine Manufacturing, sent to Djibouti, during a tour of the Keene business Monday.

U.S. Rep. Annie Kuster scaled a roof before holding a roundtable on renewable energy and housing during a visit to the Elm City late Monday morning as part of a clean-energy tour through her district.

Kuster, a Hopkinton Democrat, told constituents what may come down the pike in Washington and learned more about Keene’s clean-energy initiatives in both the private and public sectors.

Kuster and local leaders wove together how affordable housing can be improved by refurbishing buildings to make them more energy efficient.

The congresswoman also praised the Elm City for the reputation it’s earned for going green.

After touring Filtrine Manufacturing on Kit Street, Kuster held court at a roundtable at Harper Acres by the Ashuelot River.

Kuster — who represents New Hampshire’s 2nd Congressional District, which wraps around the western half of the state — was greeted by a who’s-who of local figures in the crowd. City Manager Elizabeth A. Dragon and outgoing Mayor W. Kendall Lane were among those in attendance, along with several seniors and other members of the public.

As is typical at Kuster events, the congresswoman got the conversation rolling as staffers took notes on specific concerns highlighted by constituents.

Meehan told Kuster during the panel discussion that around half of the nonprofit organization’s operating costs go toward water, electricity, heating and cooling.

Meehan added how the expected wait time for the elderly and those living with disabilities to get into affordable units has gone from 12 years to somewhere between four and seven, leaving plenty of need for funds to shorten that time instead of being tied up in energy expenses.

Kuster kept returning to her efforts in Congress to ensure people with low incomes and disabilities aren’t left behind by sustainability initiatives, and to Meehan’s point, try to use federal funds to incentivize green-energy refurbishing.

A key area Kuster said she’s targeting is making sure tax breaks for solar energy and other renewables do not expire under the Trump administration and Republican-majority Senate.

Investments in renewable energy may be costly up front — though, for the units Meehan described, existing inefficiencies in old housing and carbon-dependent energy are already a burden — but Kuster argued the long-term savings are what would count the most.

Keene City Councilor and Mayor-elect George Hansel built upon those sentiments from the back of the hall, connecting affordable housing and green-energy upgrades to the city’s ambitious yet nonbinding clean-energy resolution.

In January, the city councilors voted to set a goal for the Elm City to move off fossil fuels for electricity use by 2030 and for thermal and transportation use by 2050.

Hansel said the first big step in that process needs to come with renovating Keene’s aging housing stock, which could build momentum toward improving property values and hopefully generating more property tax revenue for the city without overburdening homeowners.

Earlier in the day, Hansel and his uncle, Peter, gave Kuster a tour of their business, which assembles filters for drinking water and engineers ways to make drinking-water systems more energy efficient.

The Filtrine Manufacturing executives and co-owners — Peter is president and George is operations director — took Kuster around a revamped room showcasing the history of the family business and how it has grown since arriving in Harrisville and later Keene.

Kuster then got to take a look at the factory floor, with Peter demonstrating how Filtrine turns woodchips into steam energy, and even headed to the roof to check out the company’s array of solar panels — the largest at any facility in Cheshire County, according to Peter.

Back at the roundtable, George said he hopes a new solar project proposed for Fitzwilliam will take that mantle.

In Washington, Kuster said Democrats are preparing to roll out a clean-energy agenda that she hopes will be fully enacted should a Democrat replace President Donald Trump in the White House in 2021.

But in the meantime, she said some climate and clean-energy incentives in the form of grants and federal contract rules could be folded into a continuing resolution to keep the government funded, which will have to clear both chambers by Dec. 20.

While climate change is a hotly debated political issue, Kuster said there is an ever-solidifying consensus in the business community about the need to move away from carbon and toward emission-neutral energy.

Meehan, of Keene Housing, added that for those in the Elm City who struggle to afford a roof over their head, taking steps to mitigate climate change would have a more acute impact.

Meehan noted how the global scale of the problem and its threat to humanity can sometimes overshadow everyday local struggles.

“While we certainly agree for all of the reasons that everybody has already said today that [green energy] is important for existential reasons ... for us, it’s existential in a different way,” Meehan said.

“For us, it’s existential on the ground level.”