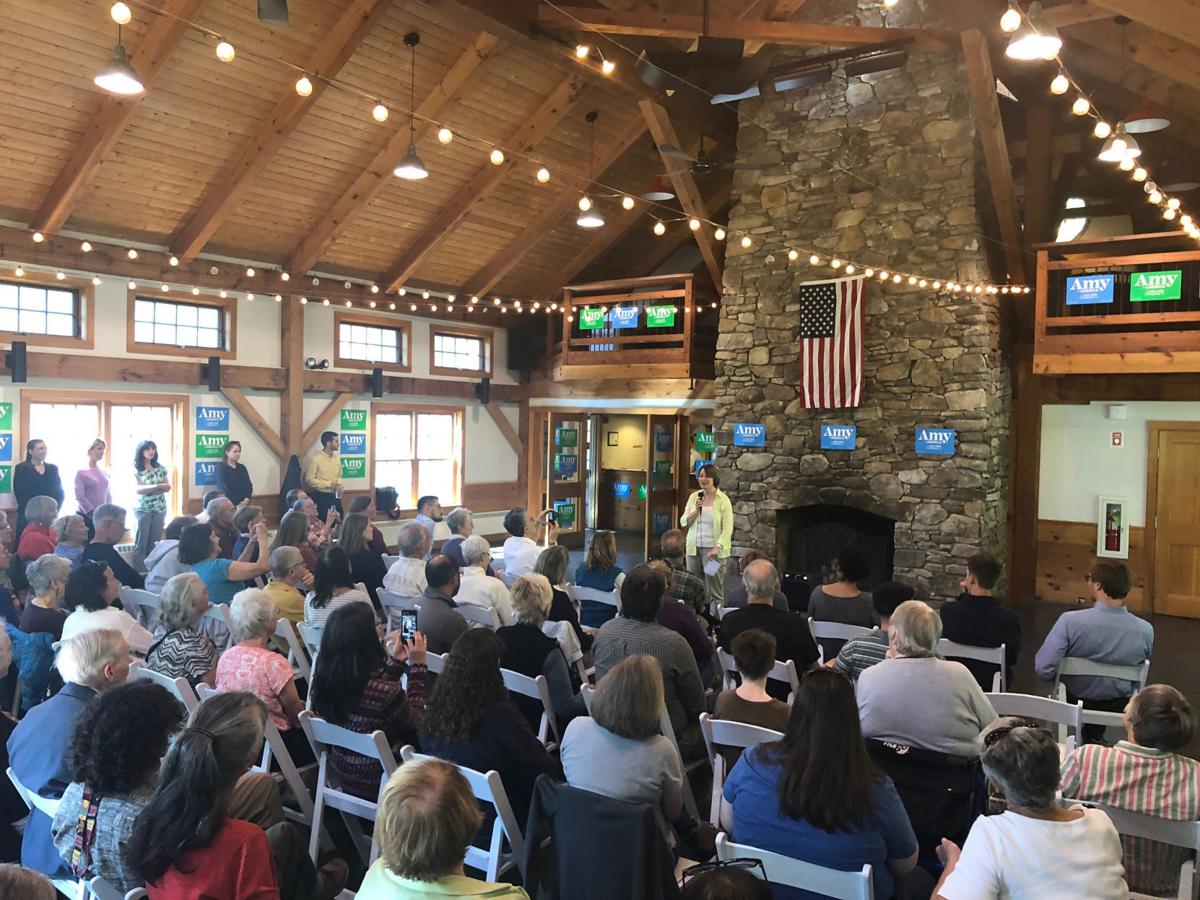 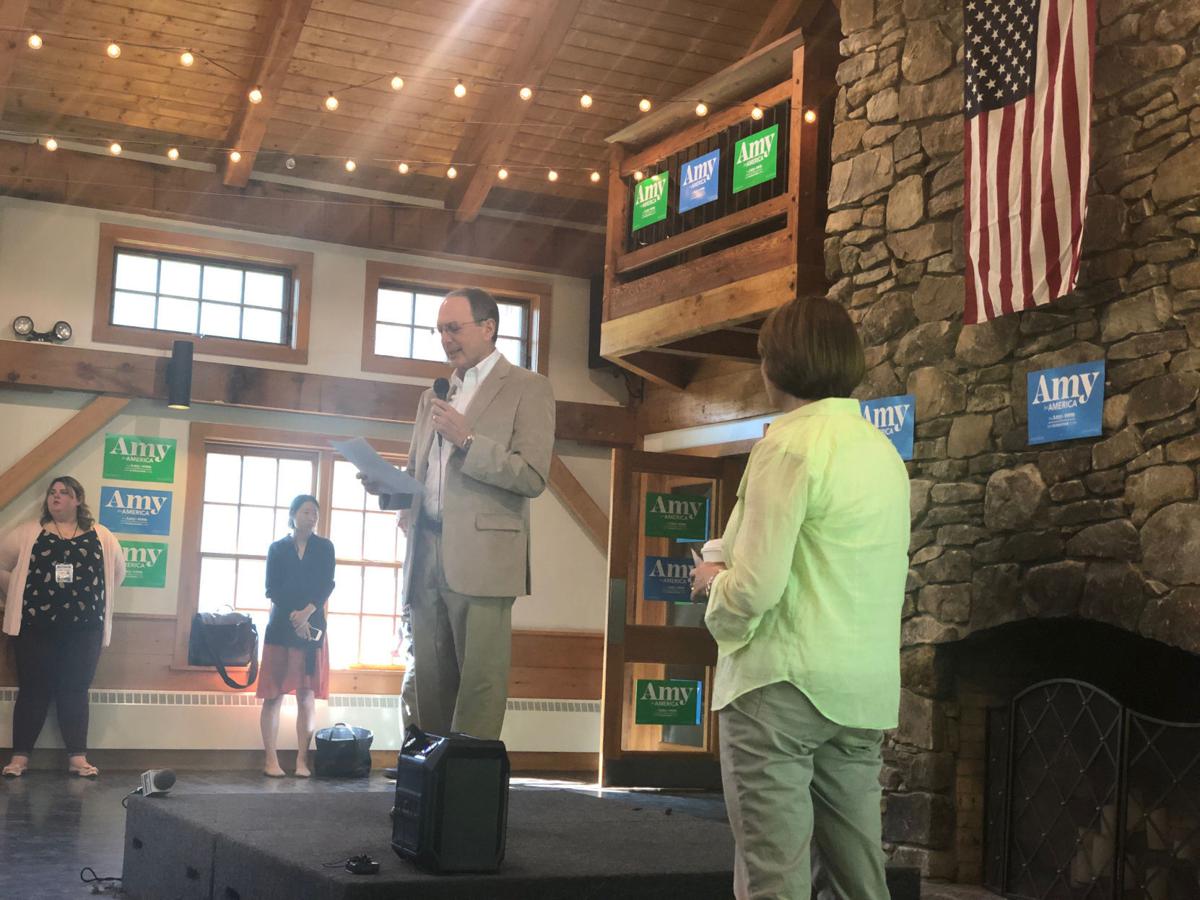 Injecting humor throughout her stump speech and demonstrating her depth of knowledge on rural policy issues, Democratic presidential candidate Amy Klobuchar connected with voters in Keene Monday morning during a three-hour visit to Stonewall Farm.

After touring the farm and conducting a roundtable discussion on her policy priorities — many of which she has laid out in her rural America and first 100 days plans — the U.S. senator from Minnesota, 59, gave her remarks and answered questions.

The campaign had the crowd at just over 70, according to a sign-in sheet.

Local leaders in attendance included state Sen. Jay V. Kahn, D-Keene, and his predecessor, former gubernatorial candidate Molly Kelly of Harrisville, neither of whom have formally endorsed a presidential hopeful yet.

However, Kahn, who introduced Klobuchar, said the Minnesotan is on his shortlist of candidates in the Democratic primary.

“I think she’s gaining — her voice is growing stronger,” Kahn said of Klobuchar after the event. “She’s broadened her ability to speak to global economic and political issues, and bring them back to domestic issues in this country. And I think that’s important.”

A top issue in Klobuchar’s wheelhouse on Monday was climate change.

That same morning, just ahead of Klobuchar’s speech, news broke that President Donald Trump had missed a meeting at the G7 Summit in France where world leaders agreed to a $20 million aid package to help put out fires in the Amazon rainforest and conserve land.

The Amazon is known as “the lungs of the Earth” for its trees’ ability to take carbon out of the atmosphere.

“We have a lot of tribes in Minnesota, and there’s this old Ojibwa saying that great leaders make decisions not just for this generation, but seven generations from now,” Klobuchar told The Sentinel before heading to a house party in Bedford. “And [Trump] can’t even make decisions for seven minutes from now.”

Beyond rejoining the Paris Climate Agreement, Klobuchar has proposed a price on carbon that she says would direct revenue toward renewable energy and give cash back to Americans in the form of a dividend to help offset the short-term increase in fuel.

The key to mitigating the effects of climate change, she said, is keeping Americans invested in the lifestyle changes by ensuring economic benefits are always in tow.

“I think we’ve learned from all of the efforts [to combat climate change] going on around the world, and one thing we know is that we’re going to have to invest in communities where they’re going to see transitions,” Klobuchar said. “It’s not just going to be green energy you invest in there. It’s also manufacturing and other kinds of jobs, so you make sure that you are making sure that people are continuing to support their families and other things.”

Klobuchar also commended the Elm City for its renewable energy resolution passed in January, which aims to rid Keene of fossil fuels from electricity use by 2030 and from thermal and transportation use by 2050.

“The market is making some of these changes anyway, because renewable energy is getting less and less expensive as we get better grids and it gets out there more,” Klobuchar added. “I’m talking about wind and solar and hydro ... And then look at the oil companies, man. You want some money? They’ve gotten like — how much? — $10, $20 billion, they’ve gotten all over time endless subsidies. So you take those away, and that will help us transition.”

On the rural-urban divide, Klobuchar elaborated further from her first visit to the Monadnock Region in April on how housing can revitalize rural communities facing workforce shortages.

“So I actually see this incredible political possibility with the rural housing issue and the metro-urban housing issues to get the political clout to get that done — assisted living, making it easier to get long-term care insurance, thinking ahead to the doubling of the senior population,” Klobuchar said. “... And at the same time you’re doing all of that — I believe you can do this if you have a vision for this country — making it easier for young people to live. And that’s why I bring up the senior housing issue, because it’s all interrelated; coffee shops, services, Internet.”

Tax incentives for more diverse land use beyond larger family homes, coupled with leveraging the cost of living, Klobuchar said, can catalyze young people to consider living somewhere other than a big city.

“We as a country should want young families and young people to live in rural areas,” she said. “It’s less expensive, it’s gonna make it easier for them to think and start up and do things that are better for our economy than everyone being in one concentrated area.”

At the end of her speech, Klobuchar recalled the energy of the January 2017 Women’s March, and compared Trump’s first term in office to a rain delay in baseball.

She called on voters in the room to continue to be vigilant for the next year, and encouraged them that they all have a role in bringing the country together and forging progress.

“I’m just asking you, it’s just another year of this rain delay, right?” Klobuchar said. “And I’m asking you to continue that march, because you are the welders that have shortened the arc.”