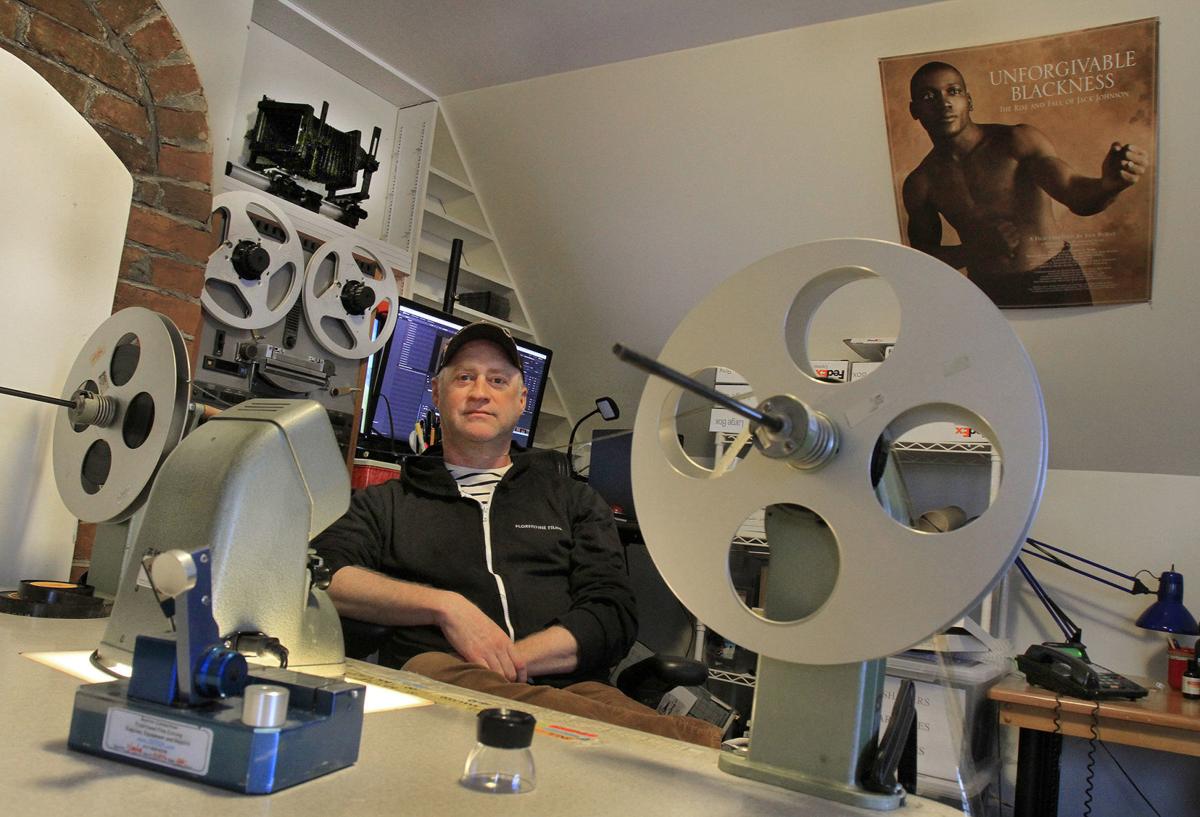 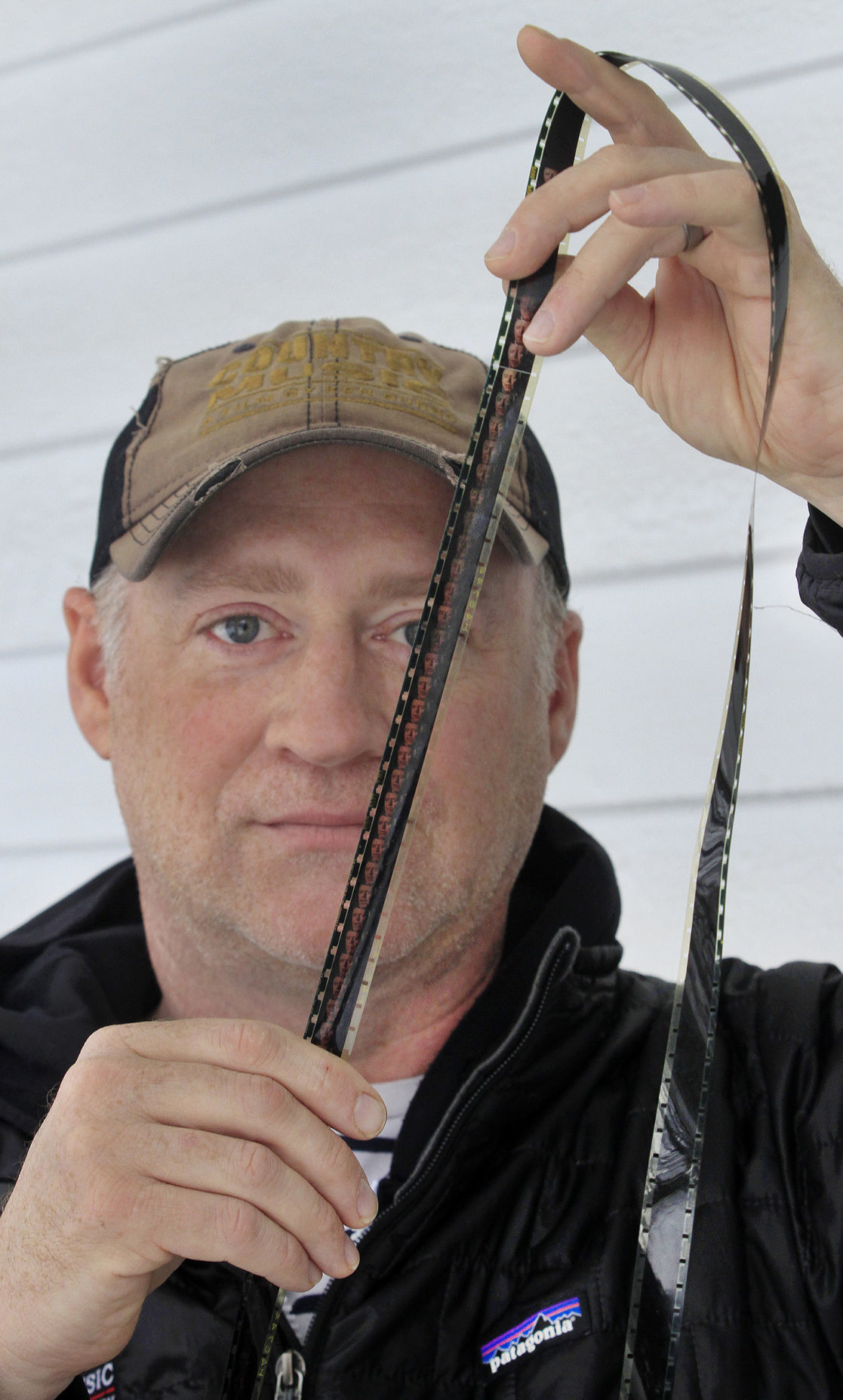 Often, it’s the little vignettes that offer insight into a person.

Dan White of Keene relates one.

He takes a lot of long trips as part of his job as post-production supervisor at Florentine Films in Walpole, the studio that filmmaker Ken Burns has made famous with his documentaries.

“When I come home, I often drive up through Route 10, and when I reach the New Hampshire line at Winchester, I roll the window down — winter or summer — and breathe in that smell of home.”

Such a descriptive anecdote, and so fitting for someone who hails from families with deep roots in both Swanzey and Fitzwilliam. This lineage dates back to well before the Civil War, coincidentally the great national conflict that was the subject of Burns’ wildly popular nine-part film that established him as one of the nation’s top documentarians.

The 47-year-old White is an energetic man who divides his time between the studios in Walpole and his office in his home on Keene’s Cottage Street, a structure originally built in the mid-1700s as a barn on Marlboro Street and later moved to its present location.

“You can tell its age by its beams,” he says, pointing to the hand-hewn timbers in the ceiling. “It’s a great old house.”

Like his boss and mentor Burns, White is a storyteller, and it all begins in Pensacola, Fla., where he was born. His father, Dave, was in the Air Force, and the family of five — he; his mother, Lorraine; and siblings Jennifer and Dave — moved to Panama when his dad was reassigned. While there, during the Jimmy Carter administration in 1977, the Panama Canal Treaty was approved that would officially cede the canal to Panama on the last day of 1999.

Shortly after that agreement was signed, his father was reassigned again, and the family moved to a dramatically different climate and location — Duluth, Minn.

“We drove the whole way up to Minnesota from Panama — in a station wagon with luggage on top — through some war-torn countries at the time,” he says. Several Central American nations suffered from civil wars during the late 1970s and early ’80s, among them Guatemala, El Salvador and Nicaragua.

After the stint in Duluth, his father was transferred once again, to Nellis Air Force Base in Las Vegas, and the family moved there.

When his father was discharged, the family began their trek, by camper-van, back to his dad’s home in Fitzwilliam. Dan was 11.

“I recall being half asleep in the camper and hearing my father say, ‘We just passed into New Hampshire,’ and I looked out the window and saw a beautiful river and had such a warm feeling.” The river, he later came to know, was Pauchaug Brook, which parallels Route 10 for a short distance at the Massachusetts-New Hampshire border.

White graduated from Monadnock Regional High School in Swanzey, but admits his academic performance was less than stellar. “I think I might have been second to the last in the class, maybe even last,” he says.

Nevertheless, he was admitted to Keene State College, which he attended for two years with no improvement in his study habits or grades.

“I finally figured out it was a waste of money, so I dropped out.”

But studying photography and film at Keene State whetted his appetite for the subjects.

He took a job at Vermont Color, a film-processing company in Keene, now long out of business, which was then located where Cobblestone Ale House now stands on Main Street. From there, he went to Cheshire Color, now the site of Penelope’s Home Consignment at the Center at Colony Mill. He subsequently worked at Ray’s Camera in Keene, which is also now closed, until 2001.

That same year, he started his own photography studio.

“I was living off my credit card, doing weddings on weekends, shooting sometimes for The Sentinel, working as a lifeguard at the Y. I was poor as hell.”

Then, from a chance encounter with someone from Florentine Films, he learned about an unpaid internship opportunity in Walpole. He jumped at it.

Because White had been in the forefront of learning the new technology of digital photography and video production, he was put to work helping edit Florentine’s upcoming documentaries. He proved himself valuable and soon, Burns hired him full-time in 2002.

For White, it was a marriage made in heaven, as he had so much admiration for Burns and his studio. “I’d watched his ‘Civil War’ series when I was 18 years old, and it so impressed me that it was one of the reasons I became interested in film.”

By 2004, White had earned enough money to buy a house.

“I’d always ridden my bike down Cottage Street and wanted to live there,” he recalls. Through Connie Joyce, a local real estate agent who’d been a customer of his at Ray’s Camera and had become a friend, he found a house for sale. “She guided me through the whole process and didn’t take a penny.”

He continued to work his way up the ladder at Florentine, his skills becoming increasingly important as new digital processes swept through the film industry.

Also during this time, White became deeply involved in politics with the progressive wing of the Democrat Party, an avocation he maintains to this day.

“It was the heyday of a young and diverse group in Keene,” he says of the early to mid-2000s. “We had a group called ‘Drinking Liberally’ — it’s still around — and we’d debate and argue” about political matters at the original Tony Clamato’s Restaurant on Court Street. The spot is now the location of Machina Arts: Kitchen and ArtBar.

“The owner [of Tony Clamato’s], Art Prestia, would never reveal who Tony Clamato was, and we all tried to get that out of him,” he says.

It was through politics that White met his wife, Jamie Lynn Judd, who had come to Keene to work first with Howard Dean, the former Vermont governor who ran for president in 2004, and, following that, as the regional field director on the presidential campaign of former New Mexico Gov. Bill Richardson in 2008.

The two knew each other because of their political involvements, but an incident in 2008 proved to be the event that drew them much closer.

“I was working for the Obama campaign; Jamie was working for Bill Richardson. He was coming to town, and she had organized an event for him on Central Square, and that day, about 2 feet of snow fell. Even though I was on Obama’s team, I went down there and helped clear the snow.” That won her heart, he says. And his.

The two were married on Sept. 4, 2010, at the Fleur de Lis Camp near his parents’ home in Fitzwilliam.

“I predicted that our wedding day would be 74 degrees with puffy white clouds, and I was right on the money,” he remembers.

In honor of Burns, their wedding music, provided by Apple Hill violinist Elise Kuder, featured the famous “Ashokan Farewell” tune popularized in the “Civil War” series and used a total of 25 times during the 11-hour documentary.

Coincidentally, years before the couple had met, the series had also played a role in his wife’s life. “Her father became a Civil War buff because of that series, and he took her along to visit many of the battlefields.”

The couple continues to be politically active. “We do what we can to help elect liberal candidates,” he says.

They are the parents of two children, Jack, 8, and Laurel Minnie, 5. Jamie works as a regulatory specialist at W.S. Badger Co. in Gilsum.

White describes his role at Florentine Films as multi-faceted, focused on the editing process after filming is done. The entire production of one of Burns’ documentaries is an extremely complex and meticulous process, starting with an exhaustive amount of research.

“There is so much more to these films than people realize,” White says.

“Ken is a great storyteller, both verbally and in film; he calls what we do ‘emotional archaeology.’ He can take something from the past and weave it around and bring it up to the moment.”

Currently, White is involved in updating Florentine’s older films, including through what’s called 4K Ultra High Definition restoration. He oversees all aspects of the restoration projects, ranging from budget, maintenance and negotiating with vendors to quality control and color-grading supervision.

“Younger people have a much different version of video quality,” he explains. “You couldn’t force anyone under 40 years old to watch old VHS-quality film.” The enhancements “allow younger people to watch the earlier films like they just came out.”

White was also the post-production supervisor in New Hampshire on the 10-part, 18-hour series, “The Vietnam War.” He’s also been involved in numerous other Florentine films, including “Unforgivable Blackness: The Rise and Fall of Jack Johnson” (2005), “The War” (2007), “The National Parks: America’s Best Idea” (2009) and “The Roosevelts: An Intimate History” (2014).

“With every new project, it’s like we’re getting paid to learn; it’s like going to college,” he says.

White has also worked with another noted filmmaker, Alex Gibney, in the making of “Rolling Stone: Stories from The Edge,” a four-hour HBO documentary about the magazine, which first aired in 2017.

He’s also now working, independently from Florentine, on a film tentatively entitled “Monadnock: The Mountain That Stands Alone,” tracing the local landmark’s history from when it was first discovered and named by the Abenaki to the present.

“It’s been nine years in the making, runs an hour and a half and is almost completed,” he says.

It’s apropos because he tells another story about returning home from his many trips, but this time when he travels by plane.

“I always look out the window for Mount Monadnock while on the approach to Manchester. It means I’m home.”

This article has been changed to correct the name of Dan White's sister, Jennifer.

At a glance: Dan White