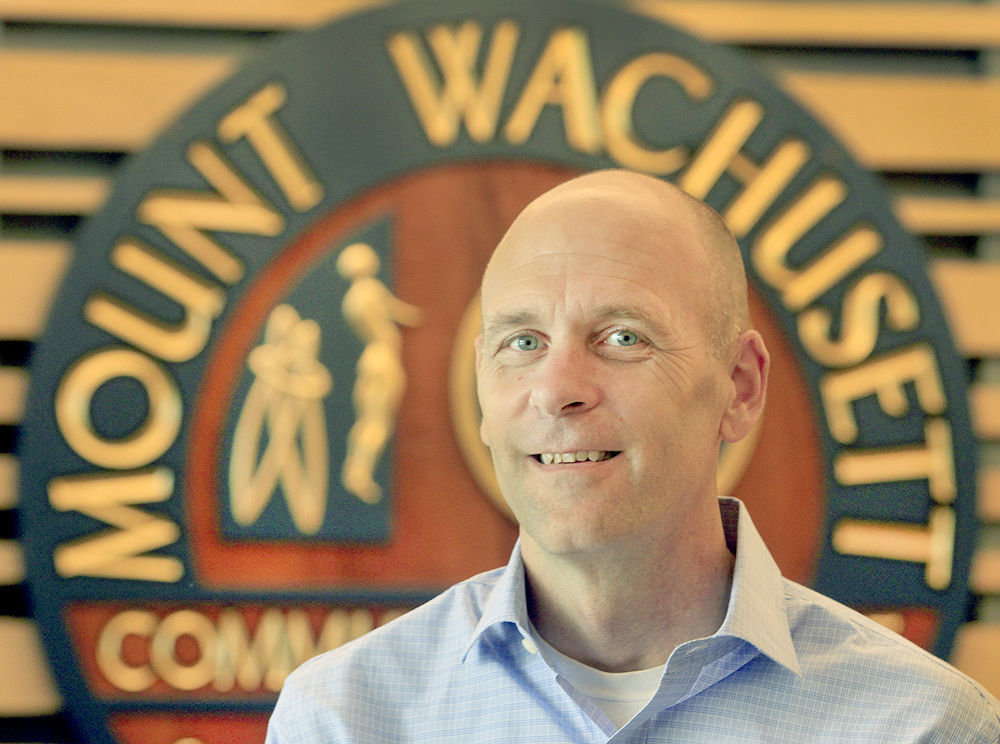 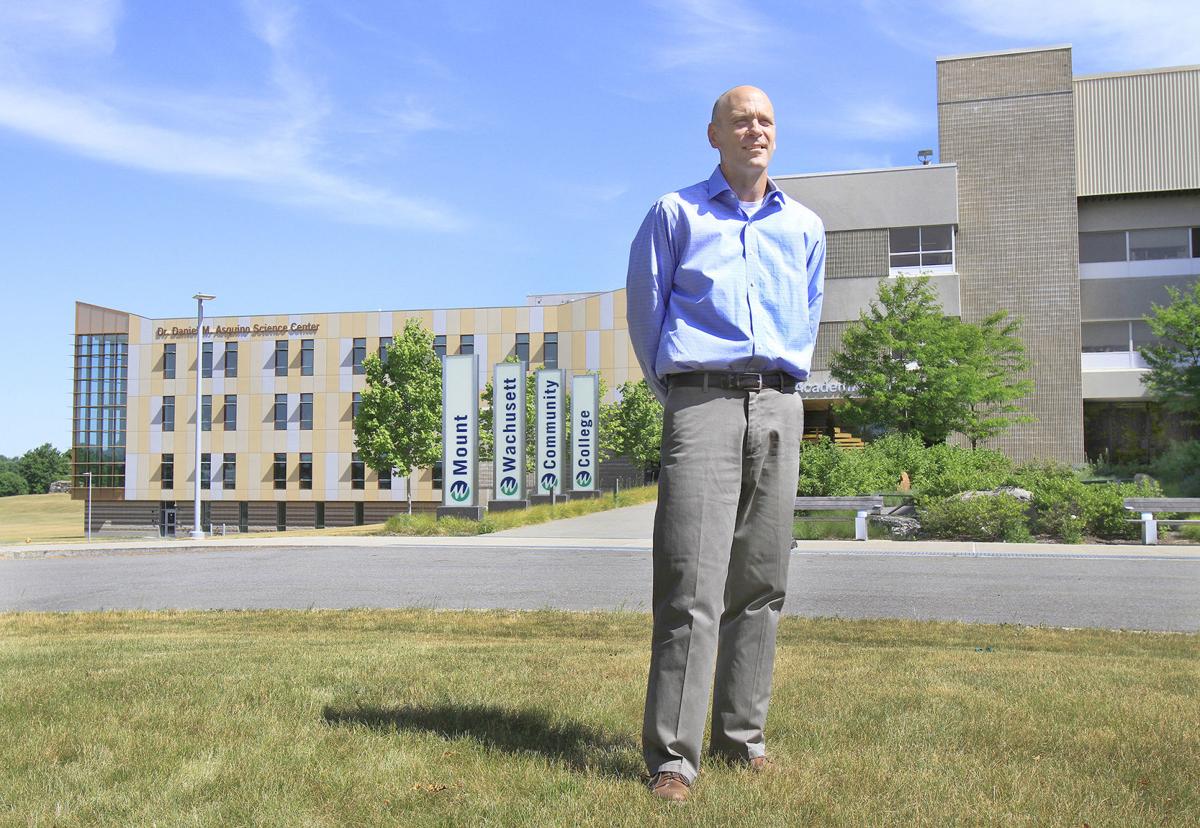 Jim Vander Hooven gets up from the sofa at his home in Keene and fetches an object from another room. It’s a brightly painted, hollowed-out gourd the size of a large wine bottle, with a metal wire hanging from a small hole in its bottom.

He manipulates it slightly, producing the sound of distant thunder, soft and soothing.

He rotates it slightly harder, and the rumbling becomes significantly greater. One can easily imagine a storm rolling closer.

“This is going to be loud now,” he warns, and forcefully shakes the object.

Thunderous explosions rend the air, as if the house were struck by a dozen bolts of lightning. It’s startling that such a small thing can produce such a din.

“You can hear the storms coming from far away through the desert,” he says after he stops shaking the object. “Then there’s the dust storms, then the monsoon rains. They’re on you, awesome and powerful.”

The object was a going-away gift from his staff when he left the presidency of Tohono O’odham Community College, a tribal college located on the Tohono O’odham Reservation in Arizona, where he served from 2011 to 2015. He then moved to Keene to become vice president for enrollment management at Landmark College in Putney, Vt. Then, in 2017, he took his current job as president of Mount Wachusett Community College in Massachusetts, with an enrollment of about 4,000 students on campuses in Gardner, Fitchburg, Leominster and Devens.

Vander Hooven, 49, is a slender man with a steady, direct cadence to his voice, his words carefully chosen as he speaks.

“My four and a half years at Tohono were the best educational experiences of my life. It was humbling, and it was challenging. The passion of the people to have a college was a symbol of their drive to educate their children.” The college was founded in 1998, and has a current enrollment of about 250 students and a budget of $12 million. During Vander Hooven’s tenure, it raised $9 million for the construction of a main campus building.

The Tohono O’odham Reservation is 70 miles west of Tucson, and consists of a 4,500-square-mile region that incorporates its people’s original Sonoran Desert lands. “It’s the size of Connecticut, but without the roads,” Vander Hooven says.

He said that he came to value and appreciate the customs and traditions of the people.

“The biggest lesson I learned from Native Americans was a deep respect for community,” he says. “With meetings there, the entire community would come together, and if the discussion lasted six hours, that’s fine; it lasted six hours so that everyone could feel they’d been heard.”

His job at the community college there represented what he says his mission has always been throughout his career — to provide opportunities and access for those seeking education, regardless of their age, background or economic status.

“I have only felt fulfilled either removing barriers or producing opportunities for people to reach their goals,” he says. “I know education can help people change their lives, and how drastically that’s needed.”

His story begins in the small city of Maumee, Ohio, about half the size of Keene, located 10 miles southwest of Toledo. It’s the home of noted American author Theodore Dreiser and the late former First Lady Betty Ford. Vander Hooven’s father, David, worked in agricultural research, inventing new uses for corn cobs in the plastics and absorbency fields, while his mother, Anne, was a homemaker.

“I was the baby of the family,” he says, six years younger than his next-oldest sibling. “I was given a lot of independence, and that helped me, for better and worse.”

He describes an idyllic boyhood, living in an old Victorian-style home, playing with friends along the Maumee River, the scene of battles during the War of 1812, and exploring parts of the Erie Canal, which stretches through the town.

Each year the family would embark on a two-week vacation. “We would go to Colorado, Wyoming, Arizona, Maine and New Hampshire. Oddly, it turned out that I would eventually live in each of those states.”

Academic achievement during his adolescence did not come easily, he admitted during his inauguration ceremony as president at Mount Wachusett.

“I recently opened a box of childhood artifacts … and I came across one of my report cards,” he told the audience of students, faculty and community leaders, according to an account in The Lowell Sun. “Here is a rundown of my grades: C+, C+, C, C, D, C, but in conduct I did get an A-.”

It was there where he met his wife, Jennie, who was a graduate student at the time. She now works with the Keene School District in its adult education program. The couple has three children: Jude, 12, Jonah, 10, and Josephine, 7. Vander Hooven commutes to his office in Gardner, a trip that takes about 40 minutes.

Vander Hooven’s doctoral dissertation, “Lessons from Success: The Experience of Women who Successfully Completed an Associate Degree While Parenting Children,” eventually led him to author a children’s book, titled “My Mommy Goes to College,” in 2018. It focuses, from a child’s perspective, on the challenges both kids and mothers might encounter while achieving the goal of higher education.

In 2015, wanting to return to New England to be closer to his wife’s family in Wilton, Vander Hooven took the job as vice president for enrollment management at Landmark College in Putney. There, he directed an overhaul of its financial aid strategy and oversaw the development and implementation of a new program, Landmark College Works, designed to provide internship and work opportunities for students with learning differences.

At Mount Wachusett Community College, the tasks before him grew proportionally, as he was leading a much more sizeable institution with four campuses.

Then, early this year, COVID-19 appeared, and the challenges have grown exponentially, he says.

“It will be an interesting and painful year,” he says, immediately admitting that’s an understatement. “We’re asking a lot of our faculty and a lot of our students.”

The college courses will be almost all online through December, he says. Currently, he’s working two days a week on campus, and the remainder of his time at home, with frequent Zoom meetings with staff and faculty.

The pandemic’s long-term effects are unknown, and daunting, he says.

“It’s not just about this fall, it’s about what we’re going to be doing for the next 15 years. When it first hit in mid-February, we had a potential case of COVID, and we mobilized the team and from that day on, we have asked ourselves what does this mean for the next five years?

“I’ve said to people, ‘Do not make a decision in a crisis that you’re not comfortable with forever.’ There are a lot of panic decisions going on out there right now.”

Among the ramifications will be how much online education will be permanent, the effects on college enrollments and finances as families lose jobs, and sustainability of some of the weaker higher education institutions.

“I tell people the number 2034, and they ask what it means,” he says. “That’s the first year of graduating high school seniors whose education was not directly impacted by COVID-19, and that’s if everything goes well.”

At a glance: James Vander Hooven