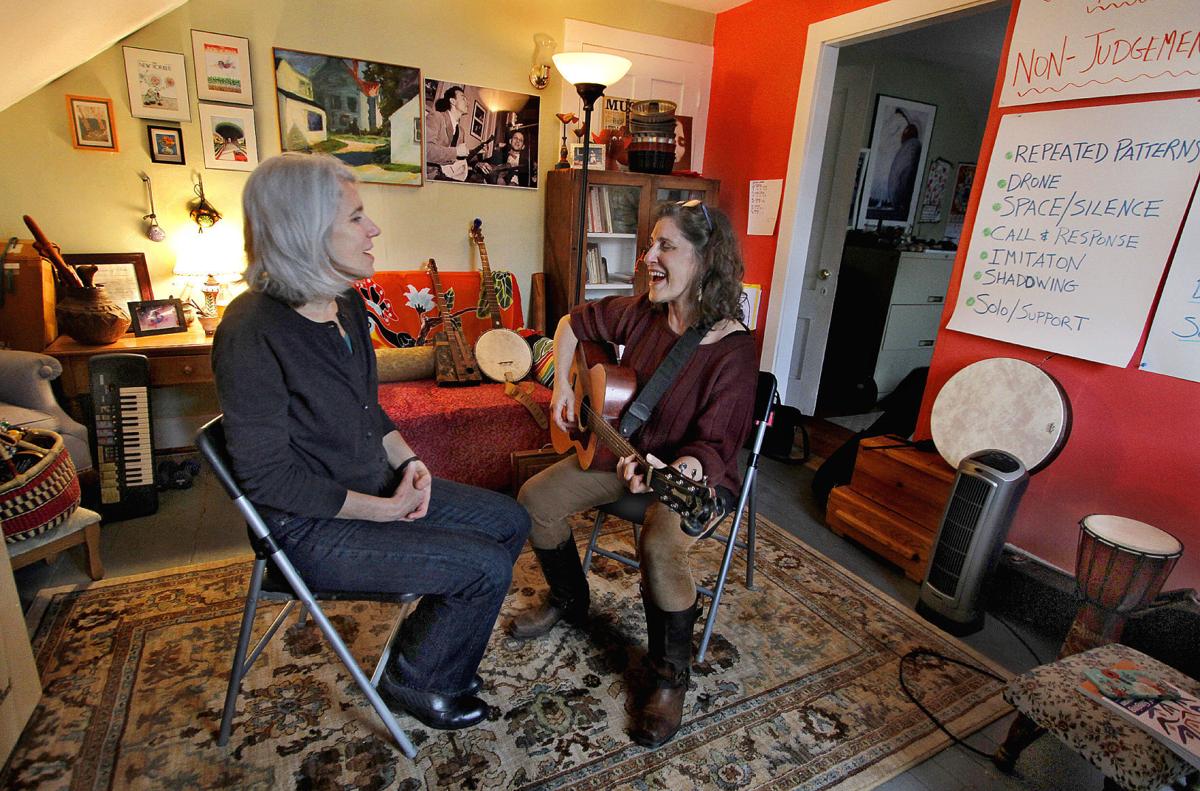 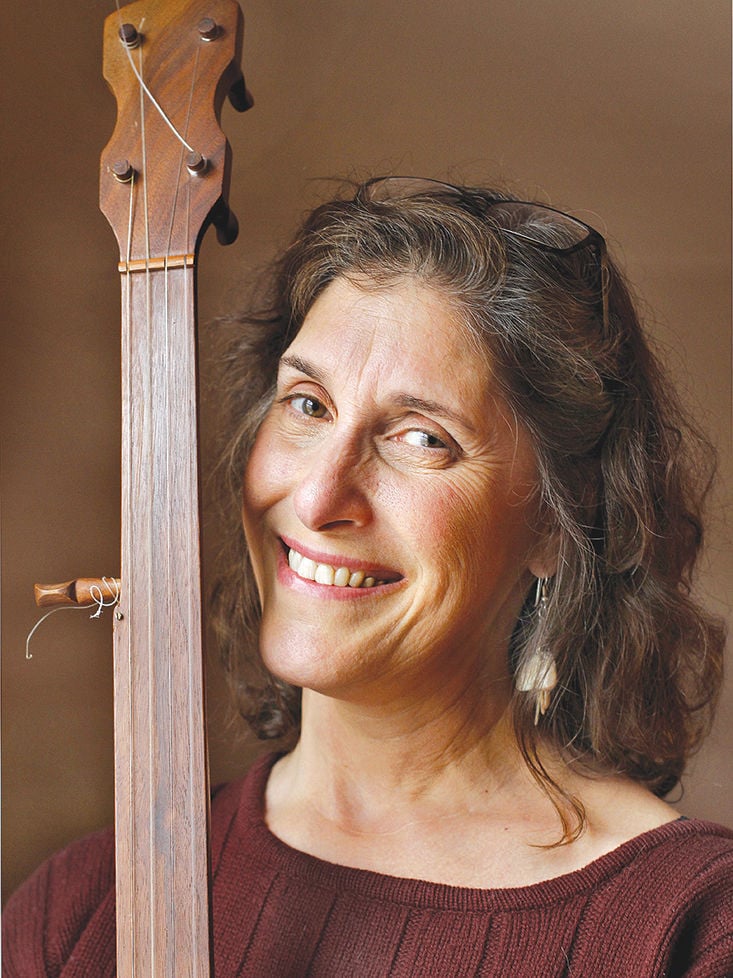 S ometimes big messages arrive unexpectedly, hidden in apparently insignificant things. For Nancy Salwen, that moment came when she plucked something off the ground while walking with a friend. It was what’s called a “capo” — a clamp used on the neck of a guitar to raise its pitch.

Seemingly an innocuous find, but she recalls how it sparked an epiphany, a call to a career — a mission, really — to teach people to sing, to teach everyone to sing.

We all can sing; it takes only vocal cords and lungs, and humans have been doing it perhaps longer than they’ve been talking — certainly just as long. But few of us actually do it much, if at all. And that’s what Salwen, 58, is determined to change — to unleash the inner singer in all of us, to liberate us to feel free to hum, whistle, yodel, bellow, caterwaul, harmonize and pierce the air with melodies, ditties, Broadway show tunes and old rock songs from the 1960s.

Whistle while you work, sing for your supper, howl at the moon, sing a swan song — it’s all in the lexicon of the language.

Salwen, an energetic Manhattan native with an engaging smile and manner settled in Keene in 1979. She is many things — a graphic designer, wife, mother of two, true zealot about the vicissitudes of Keene — but probably best known as the maestro of several programs that involve teaching singing and music-making.

It’s hard to keep a tally of all that she does, but top of the list is running two programs involving singing and music-making . The first is called “The Fear of Singing Breakthrough Program: Learn to Sing Even If You Think You Can’t Carry a Tune.” That program is supplemented by a book she wrote and published by the same title, available both on Amazon and at Toadstool Bookshop. The second program is called “Music All Around: Music and Movement Programs for Children and Adults.” Both are omnibus programs that teach people to unlock and unleash the inner singer and musician in all of us.

“Music touches us emotionally and intellectually and physically. It’s something primal,” she says from the studio she operates from her home in Keene. “This is what I love: I love creating music-making opportunities; I love teaching music, teaching singing. That’s really my passion.” Her car’s vanity license plate says it all: “MUSICBOX.”

“Everybody is born musical; everybody can sing, but our culture does not encourage it. There’s an expectation that music is only for professionals. A lot of people I work with tell me that teachers may have said, ‘Well, just mouth the words.’ They just stopped singing, so they’re not getting any practice.”

People are told they’re no good at singing, or ridiculed for trying, or it seems inappropriate or out of place to simply break open in song and belt out a tune, she says.

Salwen, who still maintains a graphic design company, also teaches through other programs of hers: early childhood music education classes at Montessori Schoolhouse in Keene, the Harrisville Children’s Center, Cedarcrest Center for Children with Disabilities in Keene and the Keene Day Care Center. She also offers singing lessons, in person and through Skype with students worldwide; a six-week online program in music; and team-building workshops for companies using voice and percussion exercises. Oh, and she hosts an improv music get-together with friends at her home every Thursday night.

“Nancy is a teacher at heart; she loves taking someone who is afraid of singing and teaching them how to sing,” says good friend Marcia Passos Duffy of Keene, who, incidentally, was with Salwen on the walk when she found the “capo” on the ground. “She has a strong desire to empower them, and the way she talks with people, it’s almost like therapy. ... She’s the most nonjudgmental person I know.”

Salwen has a fascinating background. She grew up in Manhattan, the daughter of parents who were prominent political and social activists who also mingled with noted folk singers in the New York area, including Woody Guthrie. Her father, Bert Salwen, was a noted archaeologist credited with being one of the founders of the field “urban archaeology.” Her mother, Milly Basser Salwen, was initially a journalist who later became a clinical social worker.

“When I was a kid, I’d sit in the back of the car and sing. I loved to sing; it was my way of being centered in a hectic city. I have to thank my mom for never telling me to be quiet,” she says, smiling. But singing for her was a private activity; performing in front of others made her nervous.

Her parents took her to folk music performances (“Joan Baez kissed me on the forehead,” she says.) Also, in high school she was taught how to play guitar by fellow student Bela Fleck, now a 16-time Grammy Award winning banjo player.

During her teens, she hung out with an older crowd who frequented some of the noted folk music haunts in Greenwich Village, immersing herself in that scene. On a six-week bike ride through New England, she met up with a group of Keene State College students during a sojourn on a sailing vessel out of Maine. She kept in touch with those students, and eventually found herself in Keene, graduating from Keene State with a degree in art in 1984.

In 1985, she began making jewelry, starting a 10-year career selling her wares at fairs and shows around the country. She was accompanied by her husband, Forrest Seymour, who is now the coordinator of the sexual violence prevention program at the counseling center at Keene State.

Like many of Salwen’s life experiences, serendipity played a big role in how she met her husband. She was at the old (now long-closed) Keene City Video store, and she ran into a friend there who appeared to be accompanied by another man standing nearby. Salwen struck up a conversation with the nearby man, assuming he was with her friend. Then her friend walked away, and she realized she was having a friendly chat with a complete stranger — the man who would become her husband.

By 1994 and with a baby daughter, Salwen and Seymour realized it was time to stop traveling in their jewelry business. Both transitioned to new careers, she as a graphic designer, he as a social worker. At 36 years old, she began singing with neighbors and friends and joined Animaterra, a Monadnock-area women’s chorus.

“Then I auditioned for a solo, but it turned out to be a duet; it was called ‘Down in the River to Pray,’ with Liza Constable, who was a mentor and is now my friend.”

Although graphic design was, and still is, one of her professions, her love of music — specifically, teaching it — grew over the years.

She attended a workshop at the Hannah Grimes Center on developing passion in one’s work, and it started her thinking about seriously pursuing a career in music education.

Then the epiphany, finding the “capo.”

She attended workshops and enrolled in a four-year program sponsored by Music for People, of Goshen, Conn., leading to a certificate in teaching its program of inclusive music-making to schools, concerts, health care settings and homes. She took private lessons in harmony singing and made her debut performance as a musician at Bagel Works, now called The Works. “Actually, I never got to like performing (on stage) a lot,” she admits.

Teaching people how to unleash their natural singing talent involves a number of techniques, among them experimenting with different ranges and tones. “I ask people to match my pitch, and from that base of opening, people can let go of their fears.” Among the various instruments she uses in helping people to sing is one called a “Shruti box,” similar to a harmonium and of Indian origin. Its drone tones allow people to match pitch and provide a foundation for singing. “A drone noise is a fundamental element of music,” she says.

Particularly rewarding for her is watching a person discover that he or she can sing, and appreciate the beauty of their own voice. Once that point is reached, the inhibitions or fears begin to fade. Particularly touching is a class she offers at Langdon Place in Keene, for senior residents. There, she assembles families, with the children in the middle of the circle, and residents seated on the outside rim. When the children begin to sing, the residents enthusiastically join in.

Salwen’s energy and passion is infectious, and it’s easy to see how she can handily get people to drop their reservations about singing. That attitude of openness and appreciation apparently permeates her life in Keene.

“I adore living in Keene. I love that I can walk 10 minutes and be in the woods of Robin Hood Park, or walk 10 minutes in the opposite direction and be at a pizza place or in a movie theater,” she says. “I feel we have everything a person could need here in Keene. And just a half-hour away, the same distance as my childhood apartment on the Upper West Side of Manhattan was from Greenwich Village, is Brattleboro — another great town. I love that I can live in a town that fills many of the needs and desires I have as a city kid, but that I get to heat my house with a wood stove in my kitchen!”

Her energy seems to increase the more she speaks about her passions of teaching, and the good life in Keene. It is contagious, almost as if she and those around her will break out into song.

At a glance: Nancy Salwen