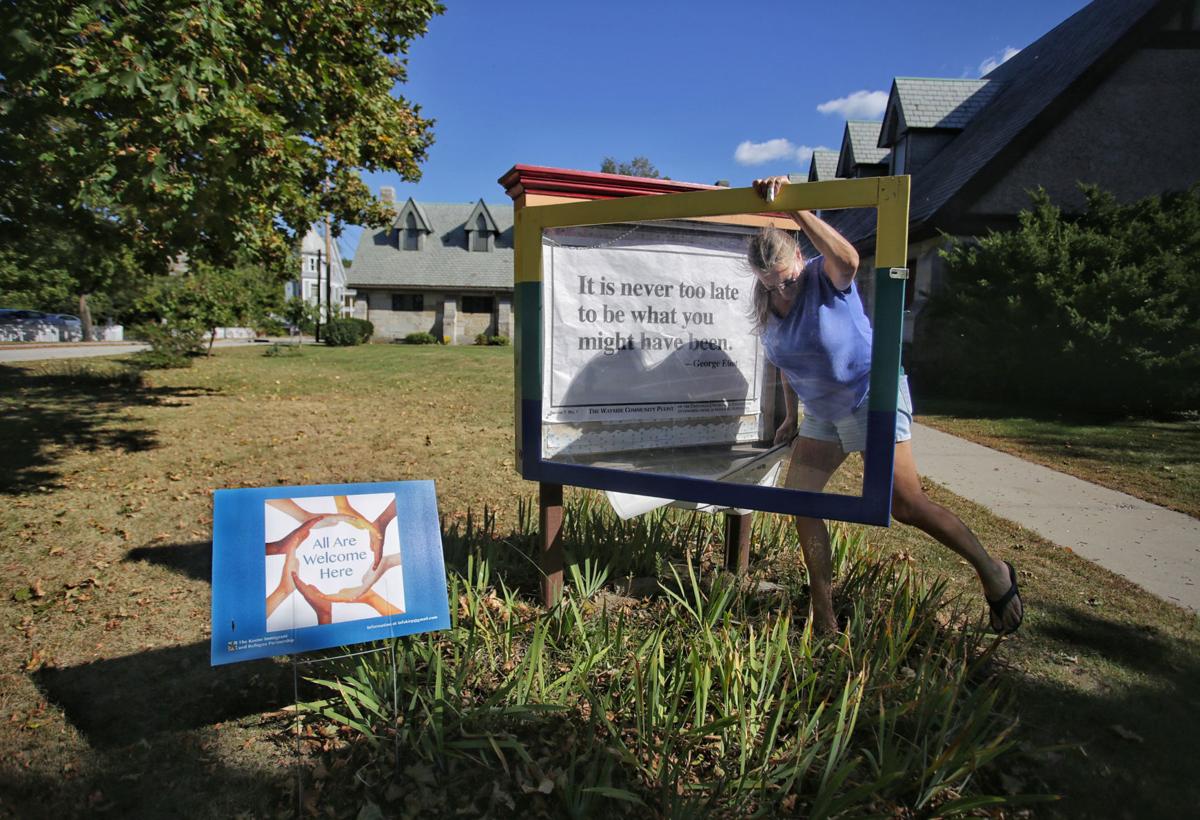 Vicki Keller, a member of the Keene Unitarian Universalist Church, carefully steps over garden plants as she closes the wayside pulpit after changing its monthly message — a quote from writer George Eliot. Beside the pulpit is a Keene Immigration and Refugee Project lawn sign. 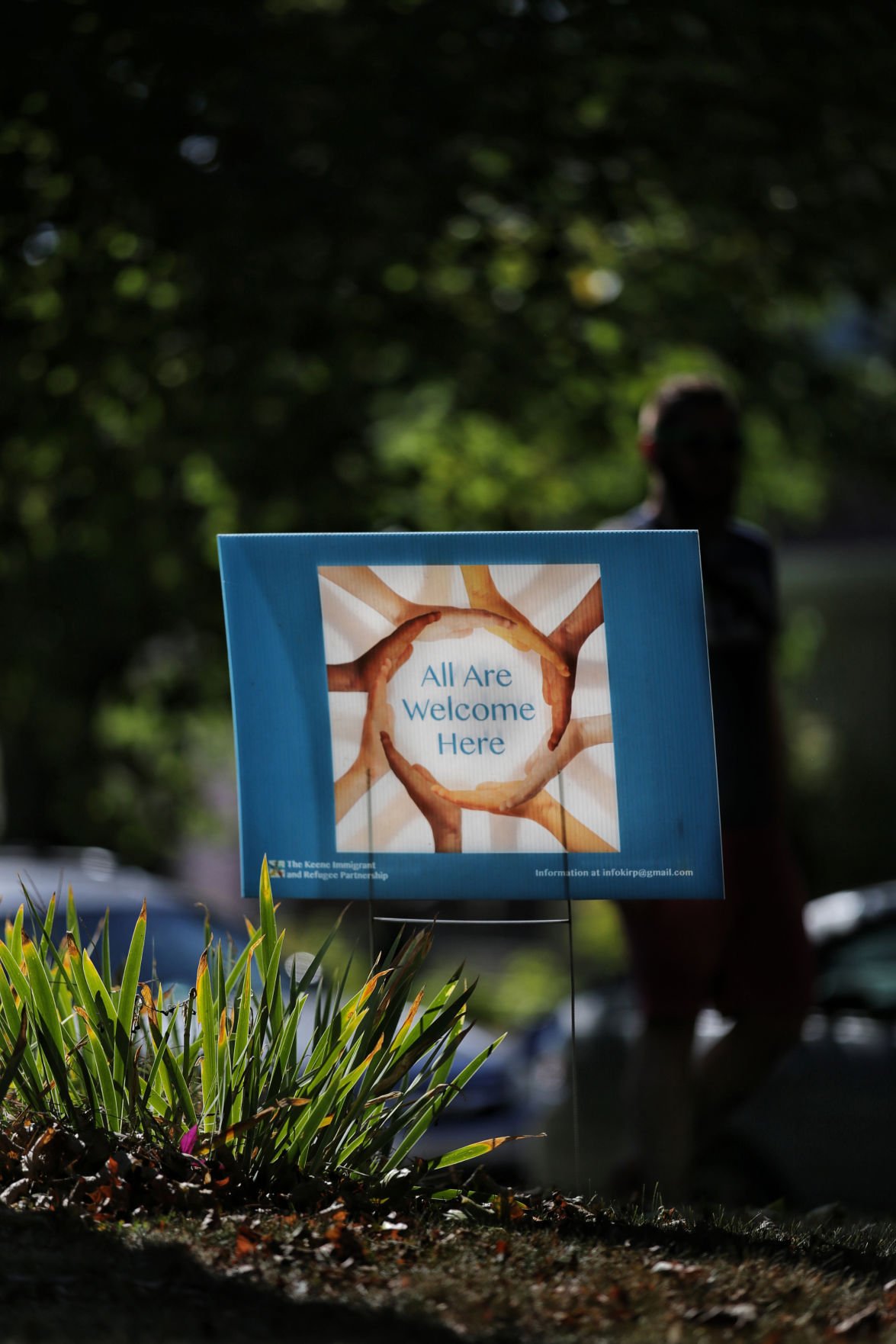 A sign from the Keene Immigration and Refugee Project on the front lawn of the Keene Unitarian Universalist Church welcomes all.

Vicki Keller, a member of the Keene Unitarian Universalist Church, carefully steps over garden plants as she closes the wayside pulpit after changing its monthly message — a quote from writer George Eliot. Beside the pulpit is a Keene Immigration and Refugee Project lawn sign.

A sign from the Keene Immigration and Refugee Project on the front lawn of the Keene Unitarian Universalist Church welcomes all.

A City Council committee will consider a resolution that would encourage the Keene Police Department to limit its involvement with federal immigration enforcement.

The proposal brings to Keene an echo of the contentious nationwide debate over so-called sanctuary cities, which several Monadnock Region communities grappled with during town meeting season in March.

People holding “All Are Welcome Here” signs packed the Keene City Council chambers Thursday night in support of the resolution, even though the only action to be taken on it was a standard procedural one.

Mayor Kendall W. Lane referred the resolution to the council’s finance, organization and personnel committee, which will hold a public hearing Thursday, Oct. 12, at 7:30 p.m.

The resolution, proposed by the Keene Immigrant and Refugee Partnership, a group that aims to make the city more welcoming for immigrants, would not change police department policy.

As drafted, it simply states that the city will “promote” certain policies within the department.

The resolution recommends that police ask about immigration or citizenship status only in connection “to a legitimate law enforcement purpose that is unrelated to the enforcement of a civil immigration law.”

It also states that police should assist federal immigration authorities and detain individuals on their behalf only if those people “are involved in violent criminal behavior, are in violation of NH State felony laws, or have an outstanding criminal warrant.”

“The purpose of this is to make sure that our immigrant and refugee residents here are as safe as they should be according to the law, and that none of our local resources are being used to do the federal government’s job,” said Susan Hay, one of the group’s founding members.

Nowhere in the draft resolution does the word “sanctuary” appear, and the group says the measure doesn’t declare Keene a sanctuary city.

“We are not bringing a sanctuary city resolution,” Hay said, explaining that the term is ill defined and divisive.

But the provisions of the resolution would seem to fit within the contours of how the term is generally understood.

“Basically, a sanctuary city is a city where law enforcement does not go out of their way” to cooperate with the federal authorities who are enforcing immigration law, said Eva Castillo, director of the N.H. Alliance for Immigrants and Refugees, an immigrants-rights advocacy group under the umbrella of the Boston-based Massachusetts Immigrant and Refugee Advocacy Coalition.

Proponents say that such protections encourage undocumented immigrants to report crimes and cooperate with law enforcement, making communities safer, and that enforcing federal immigration law is a drain on local resources.

Joe Schapiro, another member of the Keene Immigration and Refugee Partnership, said the group has had a positive meeting with Keene Police Chief Steven Russo, though Schapiro didn’t know if Russo would support the resolution.

“We are not in any way accusing the police department of doing anything wrong … or having a hostile attitude to immigrants,” Schapiro said. “… This is meant to create a dialogue about this and encourage the city and the police force to act proactively.”

Before Thursday’s Council meeting, Russo declined to comment on the specifics of the resolution.

The police department has no policy about requests for cooperation from federal immigration authorities, but the matter almost never comes up, Russo said.

He said he could think of perhaps three times over a period of many years that Keene police have had to contact U.S. Immigration and Customs Enforcement (ICE).

Keene won’t be the first Monadnock Region community to weigh its relationship with federal immigration authorities.

At the time, Harrisville police Chief Buddy Driscoll spoke out against the measure, saying it put federal funding for the town at risk while effecting little if any policy change.

“You’re asking us not to do something that we already don’t do,” he said, according to a previous Sentinel report.

That same month, voters in Dublin approved a nonbinding measure stating that “employees of the town shall not inquire about, report or act upon any person’s immigration status.”

Voters in Fitzwilliam and Hancock voted similar resolutions down in March, as did Peterborough voters, in May.

Also in March, Cheshire County Sheriff Eliezer “Eli” Rivera announced that his office would not participate in ICE raids, ask about someone’s immigration status or detain someone without a criminal warrant.

On Thursday, Ward 1 Councilor Stephen L. Hooper said he has attended several Keene Immigrant and Refugee Partnership meetings and is “very interested in supporting the resolution.”

“It’s important to share our concerns about issues that may seemingly be national issues but that are indeed important at the local level,” he said. “Issues such as immigration, and treating people with respect and dignity.”

Ward 2 Councilor Mitchell H. Greenwald said he was impressed by the meeting’s turnout and generally supportive of any resolution promoting tolerance, but wants additional details.

“If it’s looking to try to tell the police how to do their business, we need to hear from them,” he said.

Lane said he expects the finance committee to delay a decision after next week’s hearing, because the resolution involves federal law and the criminal justice system. A delay will give city staff time to review the text and make modifications.

Schapiro said he doesn’t know if the resolution will go through. But he’s optimistic either way.