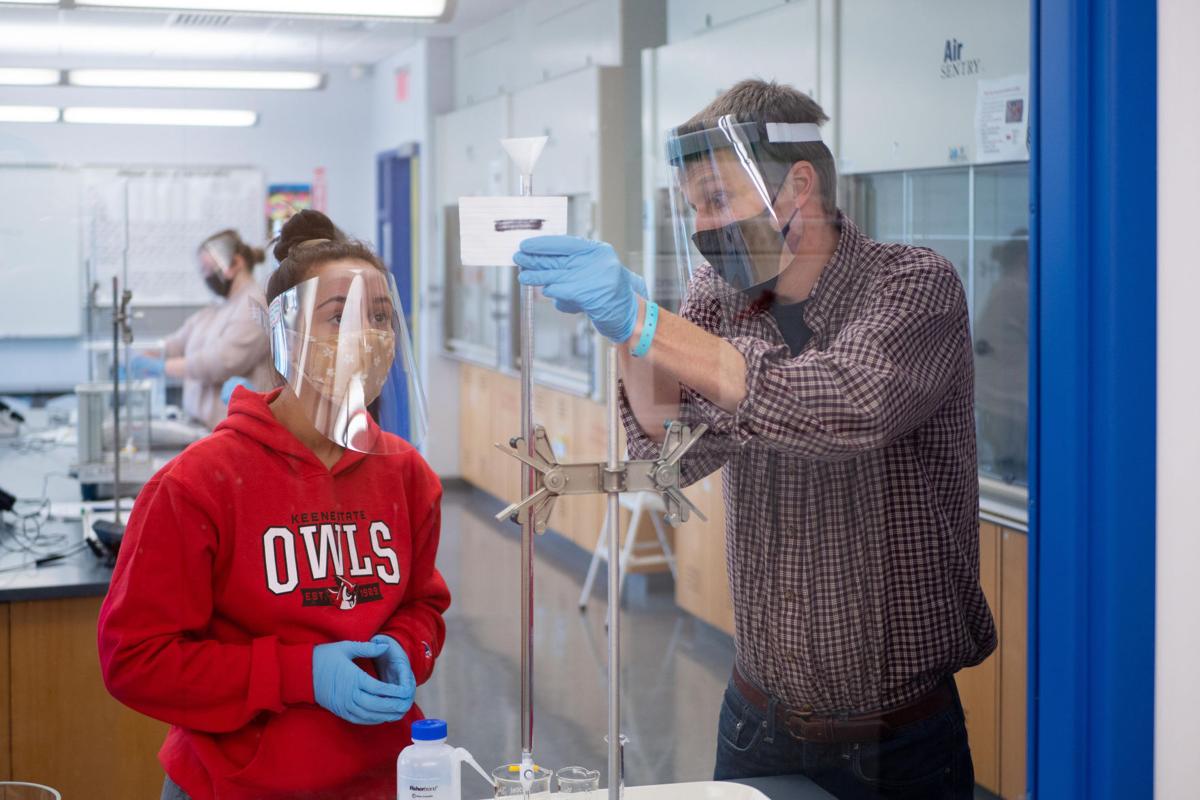 Keene State College chemistry professor Brian Anderson, right, works with Sydney Medina in a chemistry lab class last September. Anderson, the chair of the department, is spearheading a new program funded by a federal grant to offer scholarships designed to help students from families of low income pursue degrees in chemistry and biology. 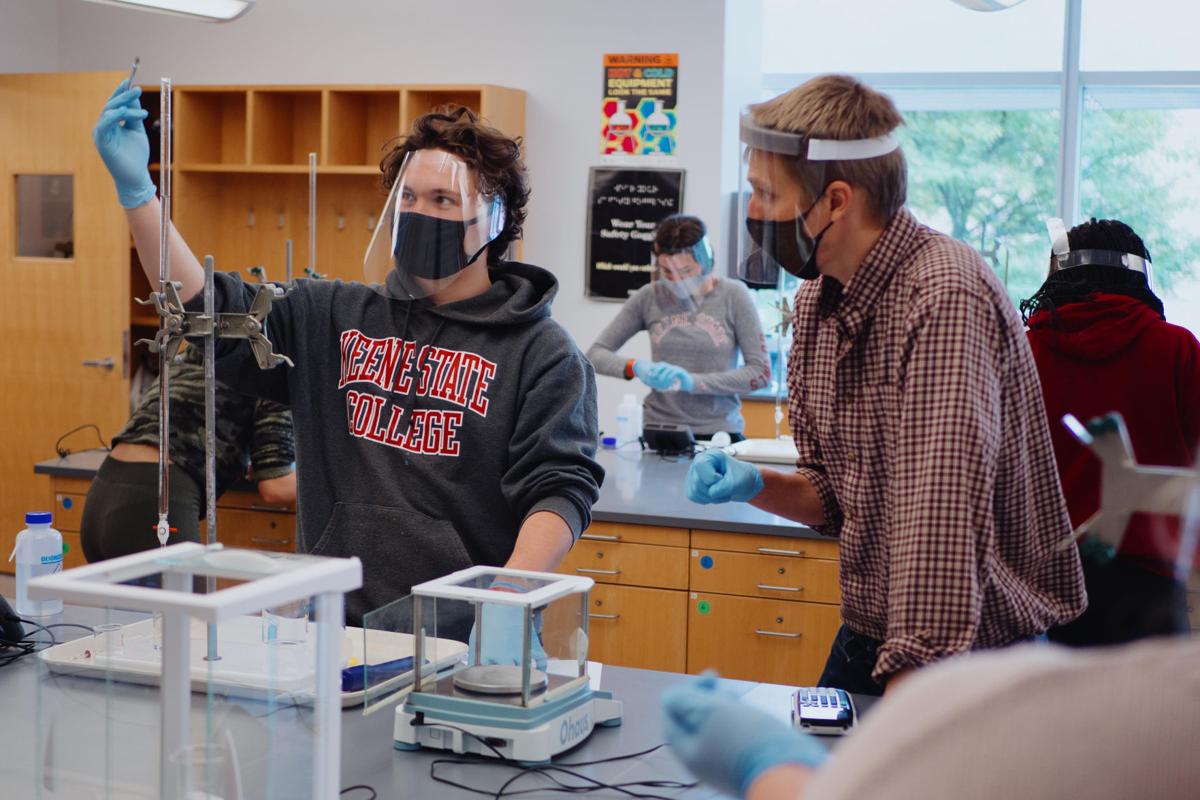 Keene State College chemistry professor Brian Anderson, right, works with Raymond Mills in a chemistry lab class last September. Anderson, the chair of the department, is spearheading a new program funded by a federal grant to offer scholarships designed to help students from families of low income pursue degrees in chemistry and biology. 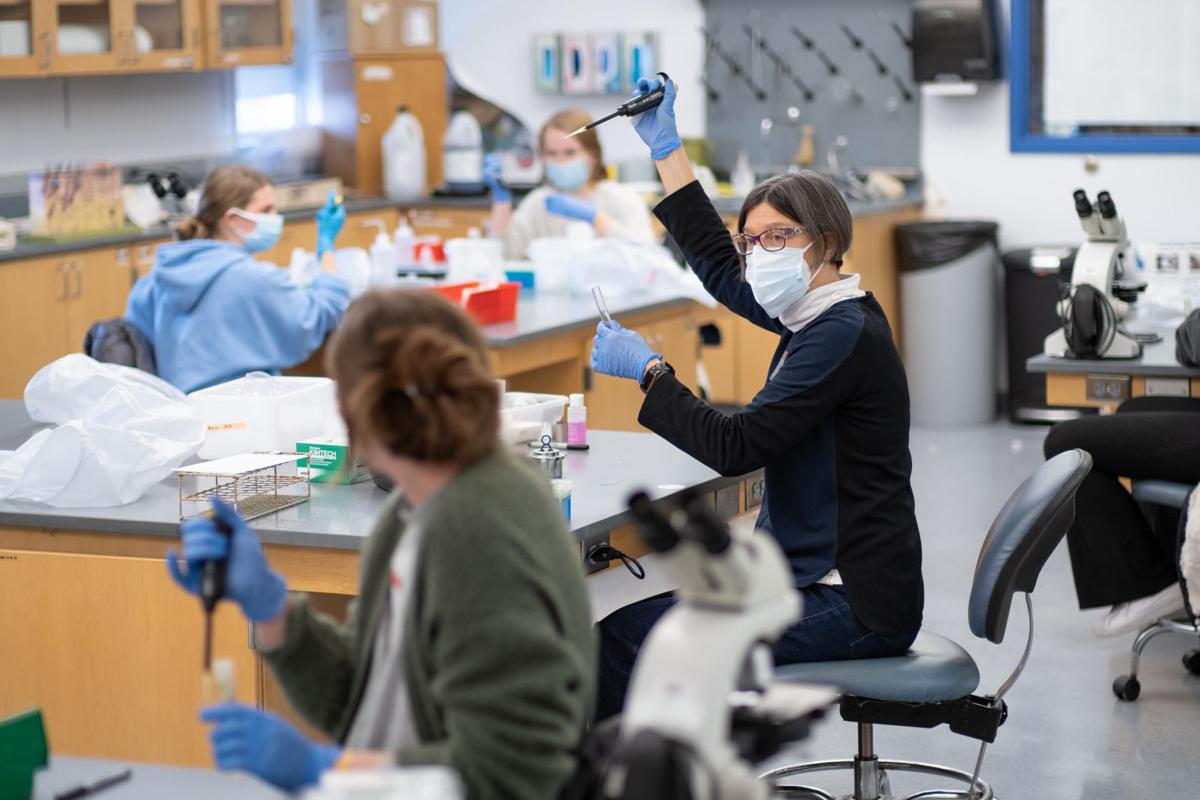 Keene State College chemistry professor Brian Anderson, right, works with Sydney Medina in a chemistry lab class last September. Anderson, the chair of the department, is spearheading a new program funded by a federal grant to offer scholarships designed to help students from families of low income pursue degrees in chemistry and biology.

Keene State College chemistry professor Brian Anderson, right, works with Raymond Mills in a chemistry lab class last September. Anderson, the chair of the department, is spearheading a new program funded by a federal grant to offer scholarships designed to help students from families of low income pursue degrees in chemistry and biology.

This time next year, a group of seven students will start at Keene State College, the first recipients of a new scholarship designed to help students from families of low income pursue degrees in chemistry and biology.

Another seven freshmen will join them the following year on scholarships funded by a nearly $650,000 competitive grant from the National Science Foundation. The money will also provide for paid research positions for these 14 students over the next five years, and a robust campus-wide support system to help them complete their course of study, and hopefully find careers in science, technology, engineering or mathematics.

“One of the cool things about the grant is it really requires you to sort of show collaboration with all offices on campus,” said Brian Anderson, chair of the chemistry department, who is spearheading the new program. “Because they want student support, you need admissions, you need financial aid, academic advising, tutoring services.”

Loren Launen, a biology professor who also worked on Keene State’s application for the NSF Scholarships in Science, Technology, Engineering and Mathematics Program (S-STEM), said the new scholarships will make biology and chemistry degrees more accessible to students who might not otherwise have been able to study these in-demand fields.

“It will also bring them the opportunity to get connected to undergraduate research in the natural sciences quickly and in a sustainable manner,” she said in an email. “Students who have to work while they are in school often work in areas unrelated to their education, but our funding will allow us to compensate students financially for research — they will BE scientists, not just students of science, during the course of their degrees.”

Keene State is still in the early stages of recruiting students for the S-STEM scholarships, Anderson said, and plans to launch a webpage for the program soon and distribute informational pamphlets to high-school counselors and science teachers.

“So we’re really taking this fall to recruit, hopefully get people to come visit campus, see the things we do and what we can offer,” he said.

Prospective Keene State students, who should contact the college to determine if they are eligible for the new scholarships, won’t have to submit any additional paperwork to the school outside of the normal admissions process, Anderson said.

“We want to keep this as simple for students as possible,” he said. “... So, you need to apply, show an interest in chemistry or biology, and then also complete your financial aid, because that’s what deems what scholarship level you’re eligible for.”

The S-STEM scholarships will average $7,000 to 8,000 a year, with a maximum of $10,000 annually for a student’s four years at Keene State. These scholarships will be in addition to any other financial aid they receive, Anderson said. For the current school year, the average tuition and fees for a New Hampshire resident at Keene State is $27,834, and $38,190 for students from out of state.

Anderson added that many in-state students who might be interested in the S-STEM program at Keene State would also be eligible, based on family income, for federal Pell Grants, qualifying them for free tuition through the Granite Guarantee. This program is open to all New Hampshire residents enrolling in one of the schools of the state’s public university system, and aims to bridge the gap between federal assistance through the Pell Grant and in-state tuition costs.

“And so New Hampshire students will be close to a free ride at Keene State with us [through the S-STEM scholarship],” he said.

Keene State first applied for an S-STEM grant in 2019, but the National Science Foundation did not approve the request, Anderson said. According to the NSF, there are 656 active S-STEM programs nationwide, including six in New Hampshire (three at UNH in Durham and one each at Franklin Pierce University in Rindge and Colby-Sawyer College in New London).

After receiving the initial rejection, Anderson said a team of Keene State faculty members spent about nine months reworking the application, including adding biology to the initial proposal, which had only included chemistry.

“We can encompass more students, and we work really well with biology,” he said. “And most students these days are really on the interface of biology and chemistry interest, anyway, and [there are] a lot of careers in the area. So that worked really nicely for us.”

Keene State submitted its application in April 2020, and learned this March that its application for $648,397 had been approved. Roughly 60 percent of these funds, or $390,000, is tied to scholarships, while the remainder will go toward student support like tutoring and research positions. And while the scholarships will go to a group of seven students each of the next two years, Anderson said the additional supports funded by the grant will be available to all biology and chemistry majors at Keene State.

“So they’d still benefit from the tutoring, they’d benefit from paid first-year research experiences,” he said. “So anybody who’s coming to chemistry or biology can benefit from everything, and then there’s this select seven that get the scholarship.”

And as the scholarship program benefits Keene State science students, faculty members will also be using it to research the best ways to help first-generation college students and those of low income finish science degrees and pursue careers in those fields.

“We are very intentionally providing students with a research experience in their first year of college and second year of college, and working very closely with faculty, really from the second they step on campus,” Anderson said. “And what we sort of hypothesize is that by doing that, we’re going to help them with their self-identity as a scientist, their persistence in the major.”

This sort of research has been conducted at larger institutions, Anderson said, but rarely, if ever, at a small, public liberal arts school like Keene State. Faculty members working on the project will report annually to the National Science Foundation, he said, and present their findings internally at Keene State, and at conferences regionally and nationally.

And while the research portion of the project has yet to begin, Anderson said he has a strong inclination what the study will find.

“I mean, we see it all the time but we haven’t really studied it: You get the student in the research lab, and that’s when the lightbulb starts going off,” he said, adding that research labs offer more opportunities than classrooms for students and faculty to collaborate. “... We’re all working together on it, and the knowledge it takes to solve the problem could come from anywhere.”