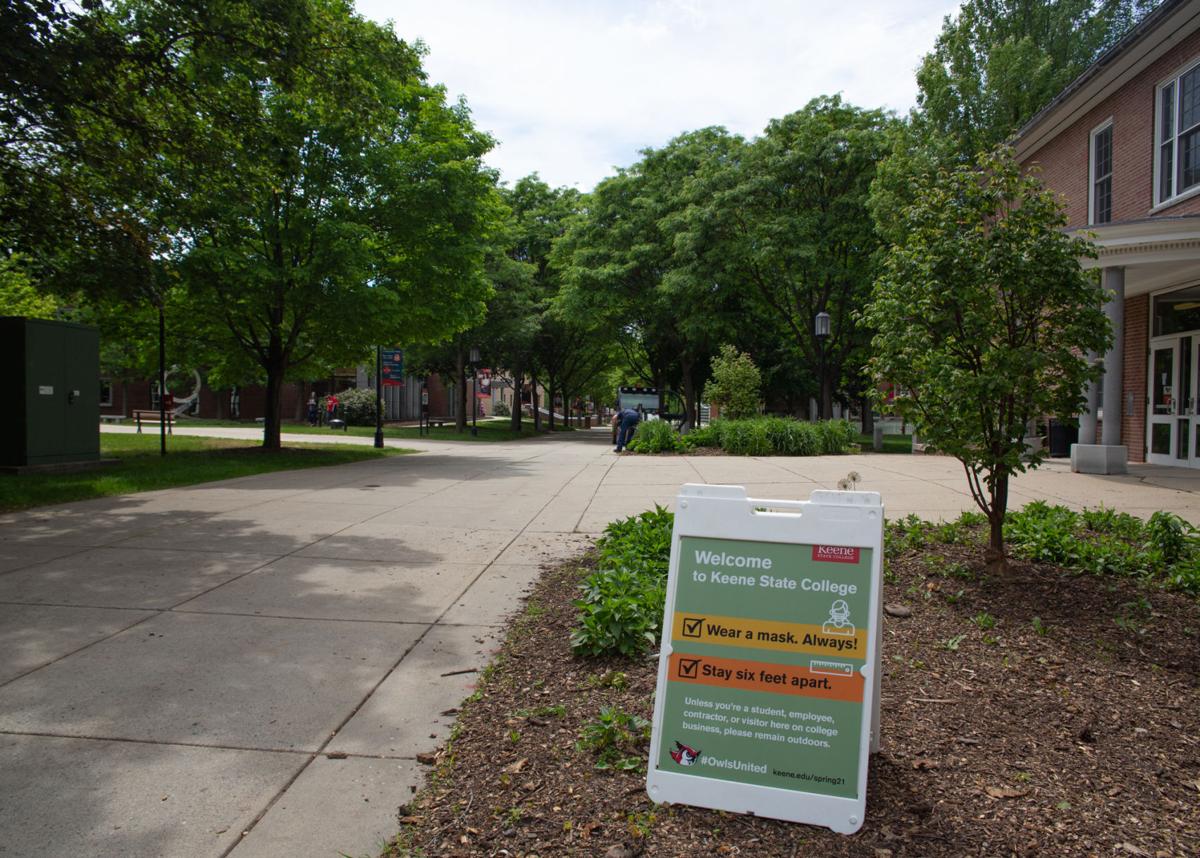 A sign welcoming guests and students to Keene State College and detailing mask and social-distancing protocols is stationed outside Morrison Hall on Friday. Keene State's student enrollment has continued to decline due to the pandemic, according to President Melinda Treadwell. 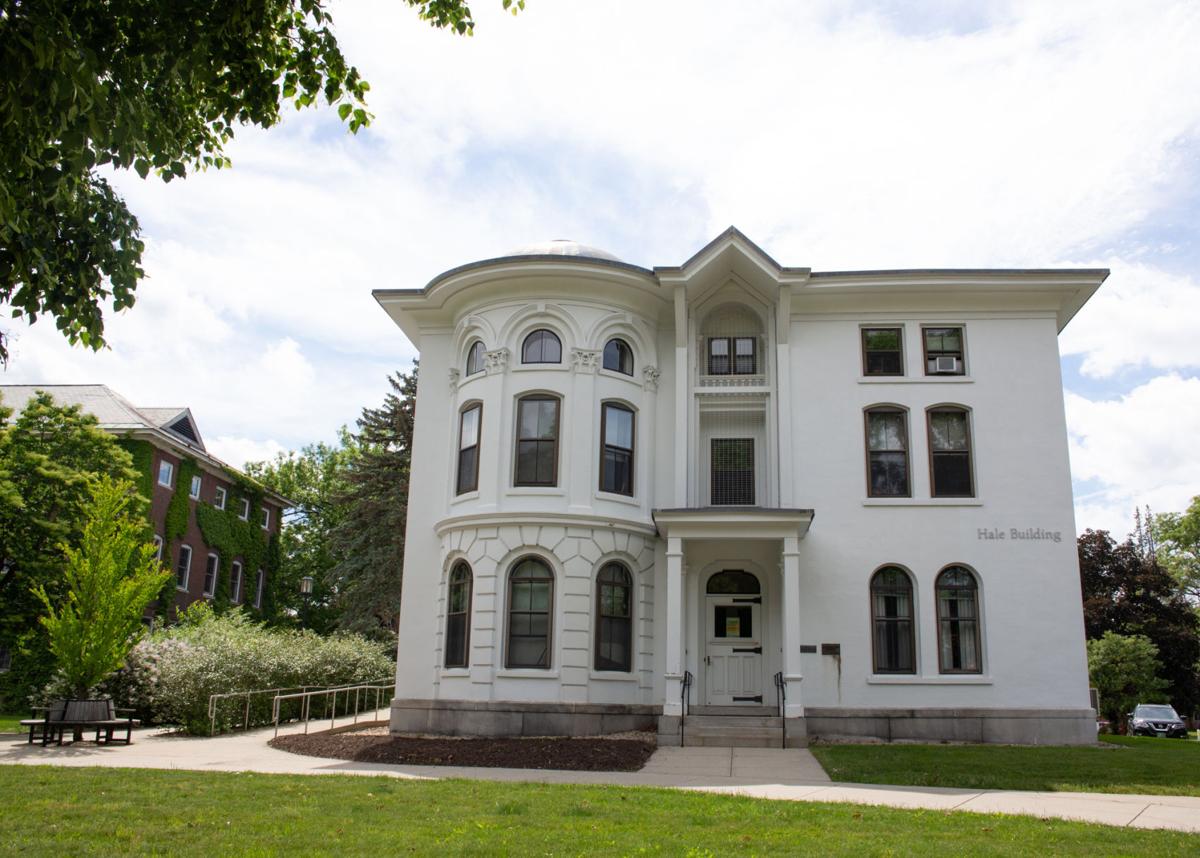 A sign welcoming guests and students to Keene State College and detailing mask and social-distancing protocols is stationed outside Morrison Hall on Friday. Keene State's student enrollment has continued to decline due to the pandemic, according to President Melinda Treadwell.

Keene State College is offering a new round of faculty buyouts as part of a multiyear effort to adjust to a smaller student body and eliminate a budget gap that grew to $14 million this year as enrollment declined further due to the COVID-19 pandemic, President Melinda Treadwell said Friday.

With these voluntary departures, which Treadwell shared with faculty members Friday, the college hopes to eliminate 20 to 25 positions to bring Keene’s State’s student-to-faculty ratio to 16-to-1 compared to the current 13-to-1.

“We can’t be stable with a 13-to-1 [ratio],” Treadwell said in a Zoom interview. “If we can get to 16-to-1, we’re in a very, very good position to come out of this. And unlike competitors and other institutions eliminating dozens of programs, that’s not what we’re looking at. We’re trying to do very measured work where we have excess, to reduce some of that excess.”

Faculty members will have about two weeks to apply for a buyout, which includes 1½ years of salary and 5½ years of health insurance, Treadwell said. College leaders will meet with faculty members again Tuesday to answer specific questions about the buyouts, she added.

These voluntary separation packages, which follow the most recent round of buyouts that began last August as Keene State has grappled with declining enrollment and budget shortfalls for several years, are open to employees in all departments. The buyouts will be completed by early August, Treadwell said, with a focus on limiting their impact on students.

“It’s not about the programs, it’s about the size of the faculty and the student engagement and enrollment demand,” Treadwell said. “So we’re really going to be focused on, when those applications [for buyouts] come in, making decisions about saying no to some faculty who we can’t lose, saying yes to some faculty where we have some excess capacity, as we did in the fall, and also looking at very limited student impact.”

Treadwell announced near the beginning of the academic year that Keene State would cut 15 faculty positions and add seven new ones over the course of the year. Ultimately, she said Friday, 24 faculty members took buyouts as part of that plan for a net loss of 14 professors.

“The staff reorganization that we’ve completed this year has brought a reduction in our permanent payroll of about $6.4 million going into next year,” Treadwell said. “That was critical for us to close that budget gap. And everyone who left got a voluntary package, and we then restructured around those departures.”

Keene State is not alone in making these sorts of cuts this year. Throughout the University System of New Hampshire — which also includes UNH, Plymouth State University and Granite State College — 488 staff members took buyouts this year, according to Keene State spokeswoman Kelly Ricaurte.

The driving force behind these moves — the COVID-19 pandemic — is also not unique to Keene State, Treadwell added. The college saw an 8 percent drop in enrollment last fall compared to expectations based on the number of students who put deposits down at Keene State, she said. Over winter break, another 4 percent of students opted to remain at home for the second semester, either learning remotely or leaving the school entirely.

This dip in enrollment, which Treadwell attributed largely to students’ concerns over living on campus during the pandemic, led to Keene State finishing the year with about 2,900 students. But going into the fall, Treadwell said, the incoming class is expected to be bigger than the college’s budget projected, and many students who left campus due to the pandemic have said they are coming back.

To help boost enrollment, Keene State extended its deadline for incoming students to make their deposit to June 1. Other colleges have made similar moves, Treadwell said, as trends show high school seniors are waiting longer to choose their college.

“Students are waiting longer to make their decisions, and then they’re depositing really late,” she said. “And we’re not going to turn a student away if we can possibly accommodate their enrollment, we’ll get them in. And I think that’s the same on almost every college campus.”

Treadwell took over as president in July 2017 at a time when Keene State faced a multimillion-dollar budget deficit and made about $7.5 million in cuts heading into the fall of that year. At the same time, the college began planning for how to make the institution financially viable in the long term, which included a previous round of faculty and staff buyouts.

Moving forward, Treadwell said Keene State hopes the latest round of buyouts will help close the budget gap by 2023.

“So, to come out of this year’s hit with COVID, within a year and a half, is remarkable,” she said. “And it’s the support of our board [of trustees] to try to help us with this last step that will get us there, but I am confident we’re on path.”

Ultimately, Treadwell added, she is optimistic about the future of Keene State, despite the difficult decisions college leaders have had to make in response to the financial hardships wrought by the coronavirus pandemic.

“This decision to have another voluntary reduction is a painful one,” she said. “Colleges don’t like to do it. We’re being very careful about it, and it’s very generous, so I’m hopeful people will understand it in the context that it’s a necessary step. Because we haven’t done enough to get to that right [student-to-faculty] ratio yet, and we’re going to be done this summer so this campus can look entirely forward, and students should have full confidence that the college is doing well.”