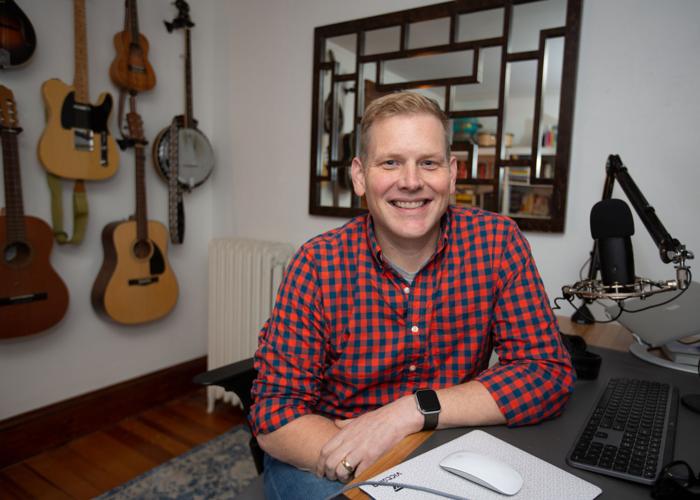 Phil Barker, professor of political science at Keene State College, is shown Thursday evening at his home in Keene, where he records his podcast, The Politics Lab, with long-time friend Bill Muck of Naperville, Ill. 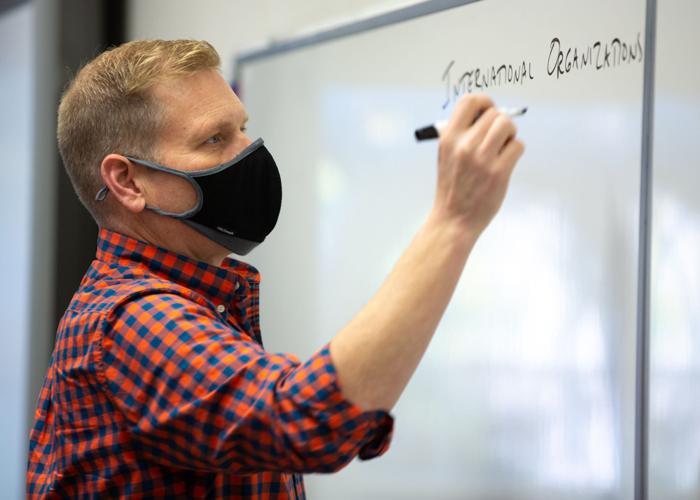 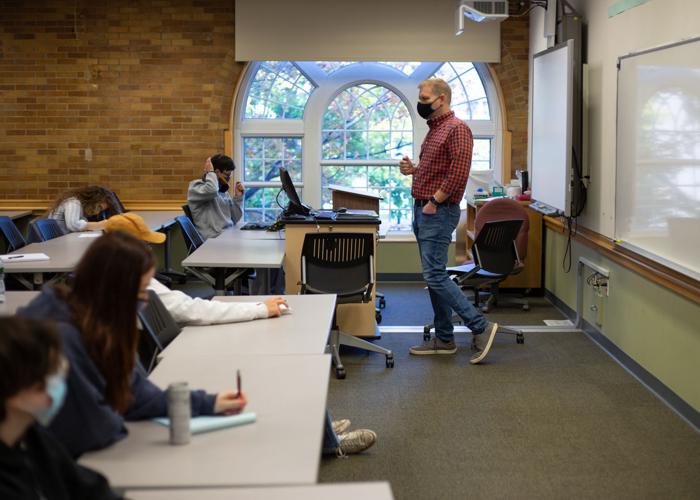 Phil Barker, professor of political science at Keene State College, is shown Thursday evening at his home in Keene, where he records his podcast, The Politics Lab, with long-time friend Bill Muck of Naperville, Ill.

Phil Barker, a political scientist at Keene State College, says his discipline can — and should — help people make sense of it all.

His chosen medium for that? Co-hosting a weekly politics podcast with his best friend from grad school.

“In the political arena, you have academics who write in journals that nobody else reads,” Barker said. “And you have, on TV, pundits who kind of talk about politics from almost like a sporting approach, like who’s winning and who’s losing.

“But … the pundits weren’t necessarily informed by what academics actually know about how politics work,” he added. “And academics weren’t doing a good job of reaching out.”

For an hour every Wednesday on The Politics Lab, Barker and his friend Bill Muck, a political science professor at North Central College in Illinois, try to do just that for an audience of about 2,500 listeners.

They pluck topics from the news, then draw on political-science concepts to explain what’s driving those events and why they matter. Their latest episode started with Democrats’ deliberations over the future of the Iowa caucuses. But they were soon discussing how more-democratic primaries can open the door to populist candidates, and comparing the American primary system to examples from Europe.

They keep the tone casual, though, peppering it with self-deprecating jokes and good-natured ribbing.

But that didn’t mean they couldn’t have a little fun with it.

Barker: “You and I are not candidates, right?”

Muck said they try to keep episodes from feeling like lectures.

“What works with Phil and I is that we’re good friends, and so we have what I think feels like a normal conversation,” he said in an interview. “… I think what makes a podcast successful is if you can connect with the people that are on that podcast, if they seem like real people.”

From science to poli sci

Barker, now 45, entered college wanting to become a biologist, but had long been interested in politics. Growing up in Texas, he’d lived across the street from Don Rhodes, a close confidant of George H.W. Bush who became friendly with Barker’s family. He arranged visits to the Oval Office when Bush was vice president and Kennebunkport, Maine, where the Bushes summered.

“George H.W. Bush was gonna take us yachting,” Barker recalled. “My dad had a business meeting, so we couldn’t go.”

By his second year at Texas A&M, Barker was feeling burnt out on science — and far more interested in his politics and history courses. After graduating — and marrying his wife, Kelly — he went on to get his doctorate in political science at the University of Colorado at Boulder.

When he was younger, he had thought he might run for office some day, but then realized he’d rather teach politics than practice it. (He was reminded that he’d made the right decision during the 2020 presidential primary, when he helped organize candidate visits at Keene State: “Just watching them having to be on all the time, it seems terrible. I have no desire to do that at all. But studying it, understanding it — fascinating.”)

In grad school, he focused on the roots of religious identity and conflict.

“All the academic research throughout the second half of the 20th century basically said that religion’s gonna go away; as countries become more modern, religion becomes less important,” he said. “And to me, there were these really obvious places in the world where religion was going nowhere, whether it was Northern Ireland [or] Poland, where Catholicism’s really central to identity.”

It was also in grad school that he met Bill Muck.

“First day of grad school, walked into the intro class and sort of scanned the room, and was like, ‘He looks normal!’ ” Barker recalled. “And then we’ve been friends ever since.”

Once he received his Ph.D., Barker and Kelly — who was pregnant with their son Jack — moved back south to be closer to family. Barker taught at Centenary College of Louisiana for three years, then spent another seven at Austin College in northern Texas, before the job at Keene State came up. He started there in 2015.

“I didn’t know much about Keene State, but, you know, small town, New Hampshire, mountains, seasons — it kind of checked all the boxes that I was looking for,” he said.

Barker says he enjoys research, but teaching is his real passion. That’s one reason he prefers working at small liberal arts colleges like Keene State.

“I love that I get to know my students,” he said. “… By the time a student finishes a political science degree at Keene State or at Austin College, you’re gonna know them. They will have had me for multiple classes.”

Barker and Muck got their start podcasting in late 2016, around the time of Trump’s election.

“Our thought at the time was, there was so much going on in the world, in the political world, that didn’t make sense,” Barker said. “… Trump, part of his brand was breaking norms and doing things differently. So we thought it would be a good time to have a podcast where we could just talk about what was happening in the world as political scientists.”

Along with one of Muck’s students, they launched Barstool Politics (no relation to the controversial media company Barstool Sports). Its tagline: “If you like discussions of good beer and bad politics, this is the podcast for you.”

Barstool Politics ended in June 2020 after some 175 episodes, and Barker and Muck launched The Politics Lab (“a podcast that puts politics under a microscope”).

Barker said the pair usually text throughout the week, sending each other articles they find interesting. Around Monday or Tuesday, they’ll figure out which stories to talk about on that week’s pod, then write up an outline. One of them reads a brief intro to kick off each topic. From there the conversation is organic, but informed by the reading and thinking they’ve done.

“We enjoy having these conversations,” Muck said. “It never feels like working. … Phil has an infectious personality, he’s always smiling, he’s always laughing. How he is in the classroom, that’s how he is on the podcast.”

Sometimes they bring on colleagues to speak about their areas of expertise. Jim Waller, a professor of Holocaust and genocide studies at Keene State, joined an episode in the wake of the Jan. 6 riot at the U.S. Capitol to talk about the roots of political violence.

Barker and Muck both focus on international politics in their research. That’s actually proved helpful in watching American politics over the last half-decade, Barker said.

Trump’s election “rattled” scholars of American politics, Barker said. But those who study democracy, authoritarianism and populism globally saw it as part of a pattern. He said research has shown socioeconomic discontent and ineffective government can fertilize the ground for populists who want to tear the system down.

“From a broad political-science perspective, it’s not that surprising,” Barker said. “But the idea that it’s happening here is shocking to me. America was always held up as this global leader and a bastion of democracy and good politics. And we’re just like everybody else.”

Podcasting to the public

Traditionally, academic careers are advanced by publishing books and journal articles aimed at other specialists. While that’s still prioritized at many institutions, Barker said he has noticed a recent trend toward more “public intellectualism” in his field. On blogs like The Washington Post’s Monkey Cage, political scientists weigh in on current events, and publications like Vox have marked a turn toward wonkier political journalism.

“It was the idea that what we’re doing in the classroom, we should be doing more broadly,” he said. “Which is helping to explain political phenomena, helping to make sense of the world, giving people the tools that help you understand politics now, but are useful in five, 10 years.”

In an article last year in the journal PS: Political Science & Politics, Barker, Muck and Muck’s colleague Suzanne Chod argued that podcasting “can help political scientists deliver on one of their core responsibilities: civic education.”

Barker said Keene State has been supportive of his podcasting, seeing it as part of his academic work.

“When I go up for a promotion, they’ve made clear that that can kind of count as a little bit of everything,” he said. “It’s research, it’s teaching, it’s service to the college. … Twenty-five hundred people a week are hearing that I’m Phil Barker from Keene State College.”

But Barker said he’d probably be doing the podcast regardless. After all, he gets to spend an hour a week chatting about his favorite subject with his best friend.

“Bill and I have talked about, if 25 people listen every week, we’ll keep doing it, because we enjoy it,” he said. “It’s fun for us to do. It’s fun to get to talk with him. And if 25 people feel like they learned a little bit more, or have enjoyed hearing us talk, then great.”

At a glance: Phil Barker