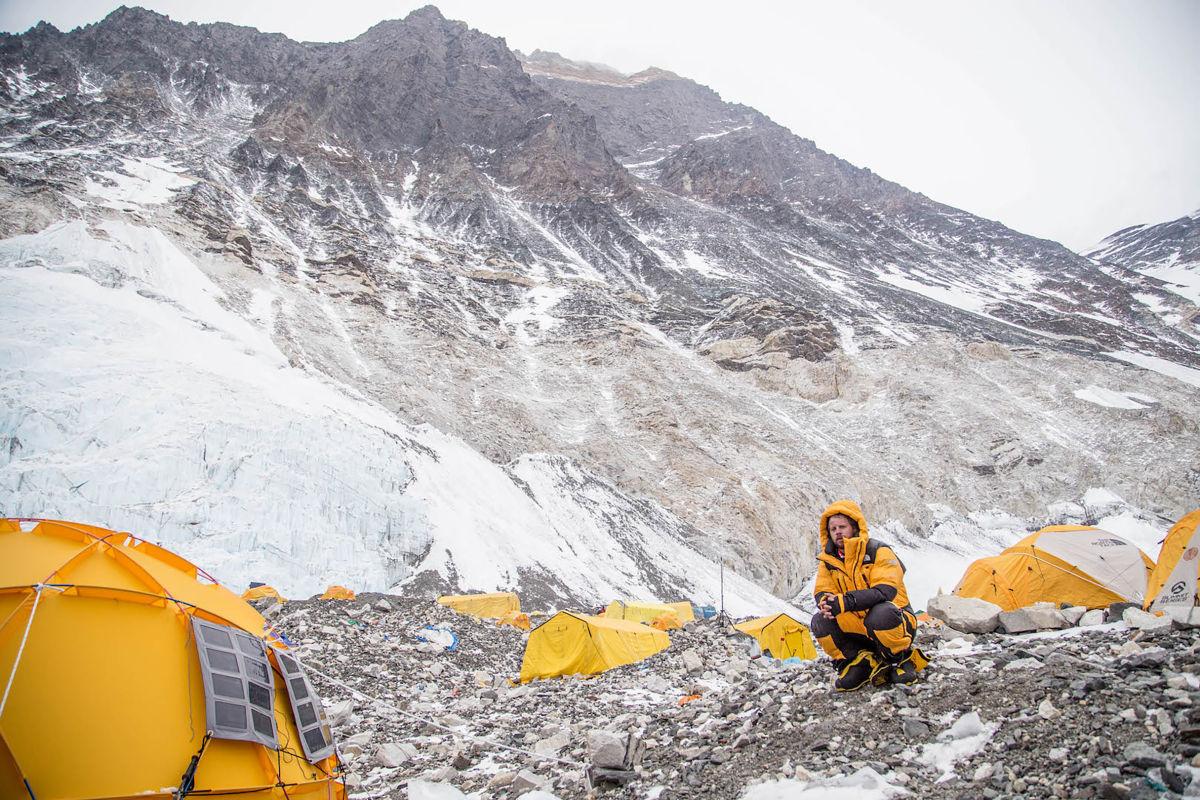 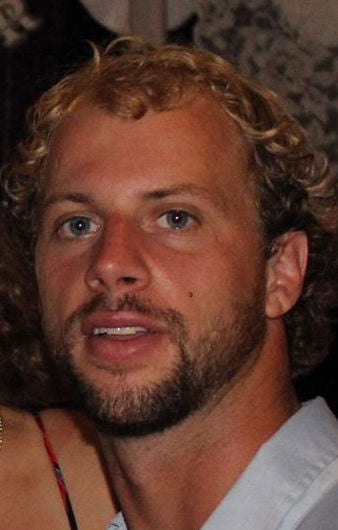 This was to be the winter of surfing in South America for Parker Haynes. The Keene State College graduate bunked with a friend’s family in Ecuador, waiting for the El Nino-infused epic swells of the Pacific to roll in.

He planned to be there for several months, similar to recent years when he traveled to New Zealand, Vietnam, Cambodia and Indonesia, for extended stays. He’s 26, an adventure traveler and mountaineer who says he’s been to every continent but Africa.

He deviates from typical tourist agendas. For instance, riding a scooter in the heart of Cambodia, off the beaten path, “is a pretty intense journey,” he says.

He runs his own painting business in Conway, in the shadow of Mount Washington, working like crazy in summer so he can play like crazy in winter. Surfing has become his passion, beckoned by giant waves from around the world.

So where’s he been the last two months? On Mount Everest.

He didn’t climb to Everest’s summit — didn’t have a permit to try — but made it as high as Camp 2 at an altitude of more than 21,000 feet. It required scaling some of the trickiest terrain on Everest, including the notorious Khumbu Icefall section.

The ice cracked and rumbled while he was there, a crevasse with a bottomless jaw threatening to open beneath his feet.

Everest’s summit has been closed to climbers the last two years because of multiple tragedies. Last year a deadly 7.8 magnitude earthquake in Nepal triggered an avalanche on nearby Pumori Mountain that killed 22 people in base camp. The year before, 17 Sherpas were killed in a massive avalanche in the Khumbu Icefall.

Haynes wondered if he would be a victim, especially when he saw fear spread across the face of Lhakpa, the Sherpa leading the group of five up the Icefall. Paul Giorgio, a legendary climber from Millbury, Mass., ran toward Haynes. So did Thom Pollard, a renowned high-altitude filmmaker from Jackson who was part of the group.

“We’ve got to get out of here, it’s falling apart. Run!” Giorgio shouted.

Haynes tells the story in a phone interview from his home in Conway Tuesday. He returned from Nepal over the weekend, and is still woozy from jet lag. He was part of Giorgio’s four-member film team that’s making a documentary called “Sharing Everest.” It’s about the behind-the-scenes people who support ascents on Everest, the highest mountain in the world at 29,035 feet.

First, they had to survive the Icefall. They had already been climbing for eight hours and were exhausted when the ice began to give way, starting with a loud crack.

“Usually you pace yourself, be slow, be smart,” Haynes says of their close encounter. “Paul is yelling, ‘Run!’ We got split up and it was every man for themself. Suddenly, this pace you’re used to, one slow step at a time — you’re trying to run. I just couldn’t do it, I was scared, trying to force myself to run and I felt like I’m going to have an asthma attack.

“It was so incredibly hard because you’re so tired by that time, eight hours climbing up the Icefall and now you’re running for your life. I couldn’t do it; I’d run 10 steps and stop. I wish I was still in rugby shape.”

The ground held and it was the only close call they had on the trip. Haynes was on his way home when heard about the four deaths on Everest last weekend.

A great experience at Keene State

Rugby is what brought Haynes to Keene State in 2010. A graduate of Kennett High in North Conway, he hadn’t intended to return to college after dropping out of Burlington College in Vermont. By then the small painting business he started in high school was doing well enough to support his four-month winter sojourns.

“I decided to go back and get an education. I love team sports and had played rugby a little bit. I knew Keene State had a good film program and a strong rugby team. I really wanted to get back into team sports and play rugby — and I had a blast. It’s the best shape I was ever in.”

Although Haynes graduated in 2013 with a degree in film production, he kept right on painting houses. Moving to Los Angeles and cashing in on connections was the only real option to make a living in film, and he didn’t want to move to L.A.

But he did cash in on a connection. Scott Barber, now based in Burlington, Vt., was a close friend at Kennett and a fellow adventurer. Barber’s father, Henry, is a noted rock and ice climbing guru out of North Conway. Barber hooked up with Giorgio and Pollard for the Everest film, and suggested taking a fourth outdoorsman with film skills if their budget could afford it — Haynes.

By then Haynes was in Ecuador for his four-month adventure, waiting for the surf to rise. He stayed only two weeks, homesick for a woman he had started dating in the fall. Yazi Azel is a teacher from Maine whose father was a photographer for National Geographic magazine.

Soon after Haynes returned home, Barber contacted him about the trip to Everest. Giorgio approved it a couple weeks later, only to rescind it because of the cost. Haynes went back to South America — this time to Peru — but couldn’t shake the idea of Everest.

“I came home early again and offered to pay some of it. This guy Paul (Giorgio) liked how I was adamant about how I wanted to go,” Haynes says.

Everest was back on and Haynes, Barber, Pollard and Giorgio flew to Kathmandu, Nepal’s capital, in late March. Only Pollard and Giorgio got permits to summit Everest, as the cost to climb to the top is about $70,000 per person. The foursome grew close, talking for hours about their lives.

As of early this week, Pollard and Giorgio were back in base camp. Pollard made it to the summit and Giorgio chose not to try while in Camp 4, the last stop at 26,085 feet before the final ascent.

Haynes says the expedition wasn’t about their attempt to climb Everest — Giorgio has reached the summit four times — but to make a film about the mountain itself. The film is intended to be part of an international traveling museum exhibit that brings Everest to the common person. He says it will feature vignettes about past and present climbers, the mountain’s history and its culture.

Giorgio hopes to ultimately build a school in the Khumbu region of the Himalayas.

Pollard is a renowned outdoor filmmaker and an Emmy Award winner. He was part of a 1999 Nova documentary on PBS in which he filmed the discovery of the preserved body of climbing pioneer George Mallory, who died on Everest in 1924 about 800 feet from the summit.

Haynes met Peter Hillary, son of Sir Edmund Hillary, who was the first climber to scale Everest in 1953 with Sherpa Tenzing Norgay. It was one of many unforgettable experiences he had, none better than simply hearing the stories of climbers from all over the world. He spent much of his two months at base camp, where climbers wait and prepare for their ascents.

He’ll always remember his first time seeing Everest, the peak majestically rising into the sky as they rounded a corner on their three-day hike to base camp.

“Of course I had seen it in pictures, films and movies but it was always this unicorn — it doesn’t really exist until you see it,” Haynes says. “And all of a sudden, I was on this trip. It was kind of like a surreal feeling. We came around this corner and just stopped. You knew it was Everest, this iconic photo you’ve always seen. We stopped and no one said anything.

“In their heads (Pollard and Giorgio) are thinking eventually we’re going to have to try to get to the top of this beast.”

More than 200 climbers have died trying to climb Everest. Yet it’s vital to the economy of Nepal, with thousands counting on the income it brings to the country. But the tragedies of recent years have taken their toll. Only 300 climbers sought permits this year, when an average year will feature up to 1,200.

Haynes spent much of his time at base camp, hiking around the area. One notable empty spot in camp was the area where the 22 hikers were killed last year.

He wasn’t severely affected by altitude sickness, which is fickle and can take down the fittest ultra-marathoner. They actually practiced in the Icefall before going through it on the way to Camp 2.

“I now understand why a lot of climbers don’t like going through the Icefall. It had been fun while we were practicing, like a hard obstacle course. I wondered why everyone was so terrified and then our accident happened. It made me respect that at any moment it could be over. It’s not just like a walk in the park,” he says.

But Camp 2 was spectacular though dangerous. Hiking around the area was off limits because of the many crevasses. “You look up and you can see the cliff and you can kind of see the summit, 7,000 feet and three days of pain away. I could see the path where people go,” he says.

Haynes did feel the urge to reach the top. “I was a little surprised by the pull I felt. I’m a hiker but it’s not on my bucket list. Yet when I was up there and saw the path leading to the summit, it was a new experience.

The long stretches in base camp waiting for the right conditions to climb got boring at times, he says, and the scope of the Himalayas is awe-inspiring. The filming couldn’t have gone better, and he’s still elated about Pollard’s successful climb to the summit.

“I miss not being able to celebrate with them,” he says.

Haynes has already turned his attention back to his painting business, called B.D. Works, and says he’s already falling into bad habits — he hasn’t read at all after averaging several hours a day while passing the time at base camp.

As for future adventures, climbing the world’s greatest mountains are on his bucket list. But not Everest. Not yet.

“I’m planning to maybe solo Kilimanjaro. This opened my eyes bit,” he says.

After all, he hasn’t been to Africa. And he’ll be 30 years old in four years.

For an in-depth look at Haynes’ trip from a first-person perspective, see the first entry of his six-part journal at http://www.wildnortheast.com/haynes-on-everest/. He intends to write a seventh part about his final days on the mountain.