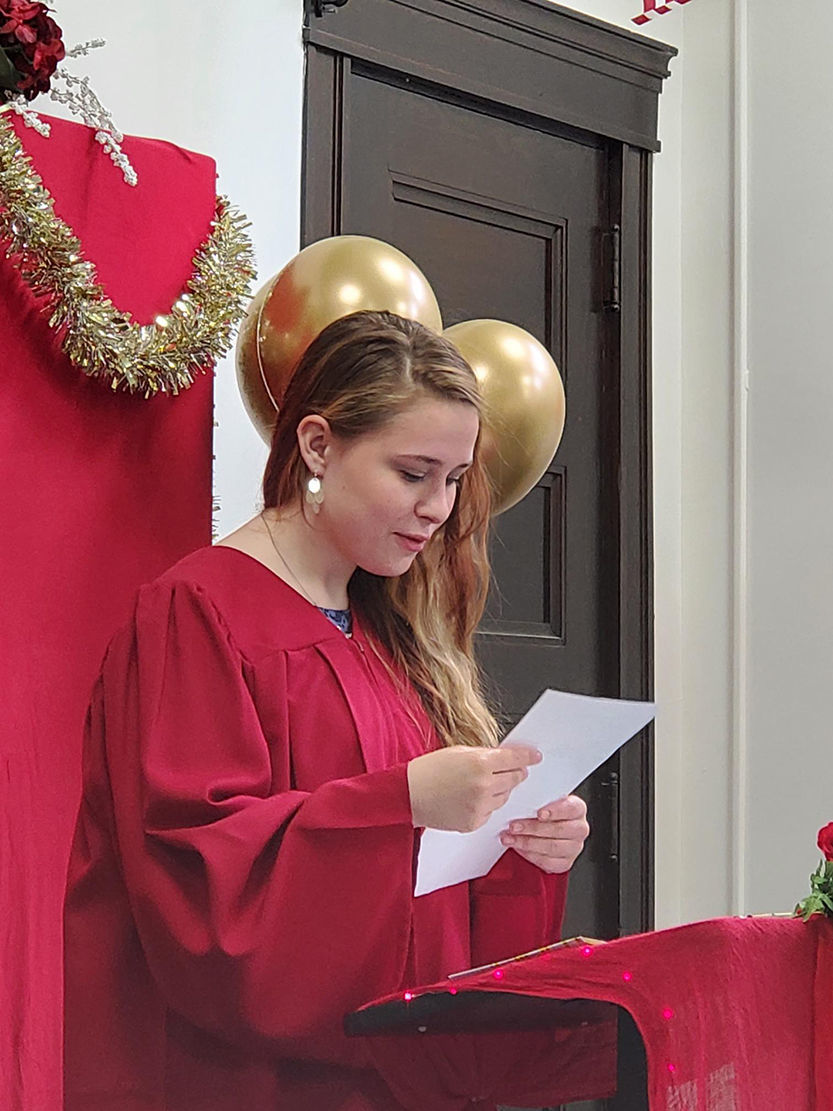 Jade Castor, 18, of Swanzey, speaks at a graduation ceremony June 19 at Ashuelot Valley Academy in Keene. 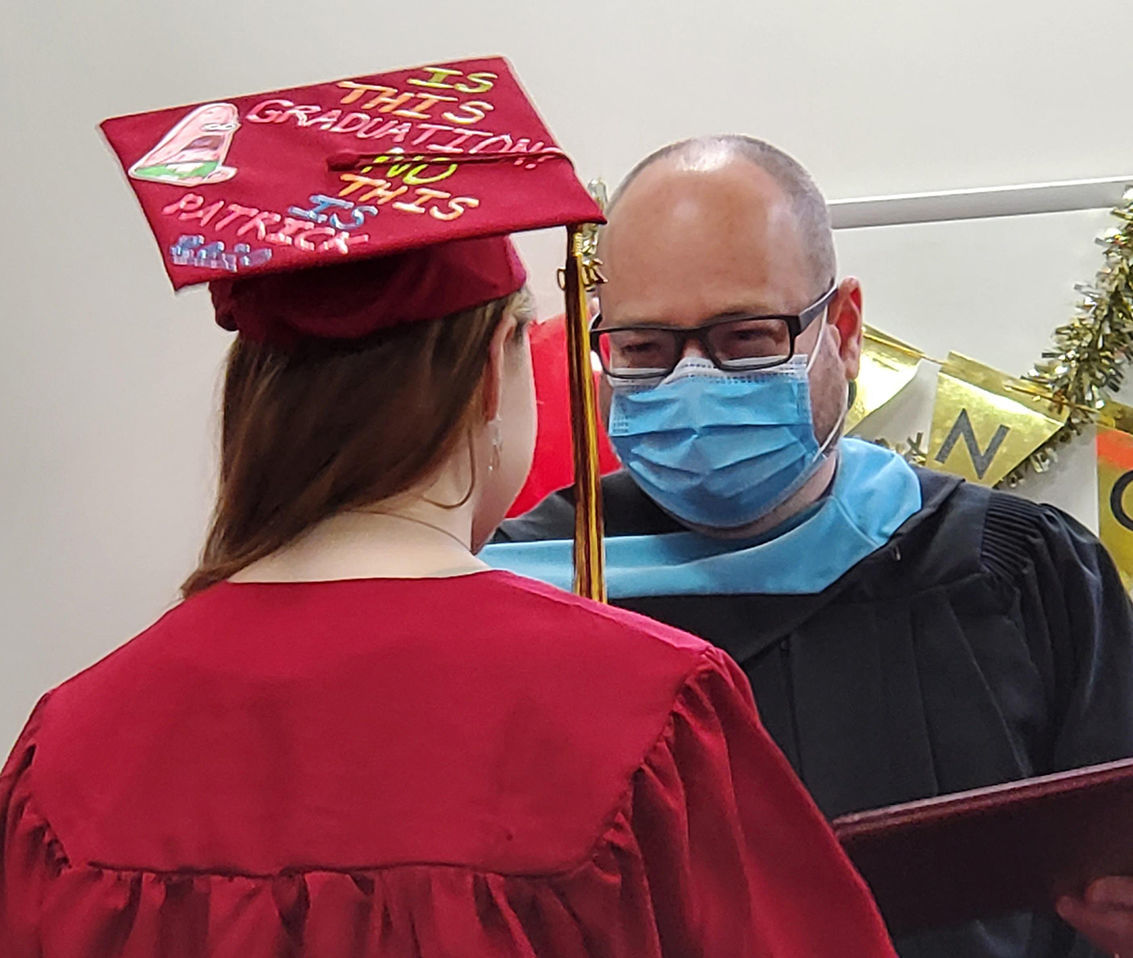 Jade Castor, 18, of Swanzey, receives her diploma from Cory Rogers, director of academics at the Ashuelot Valley Academy in Keene, during a graduation ceremony June 19. 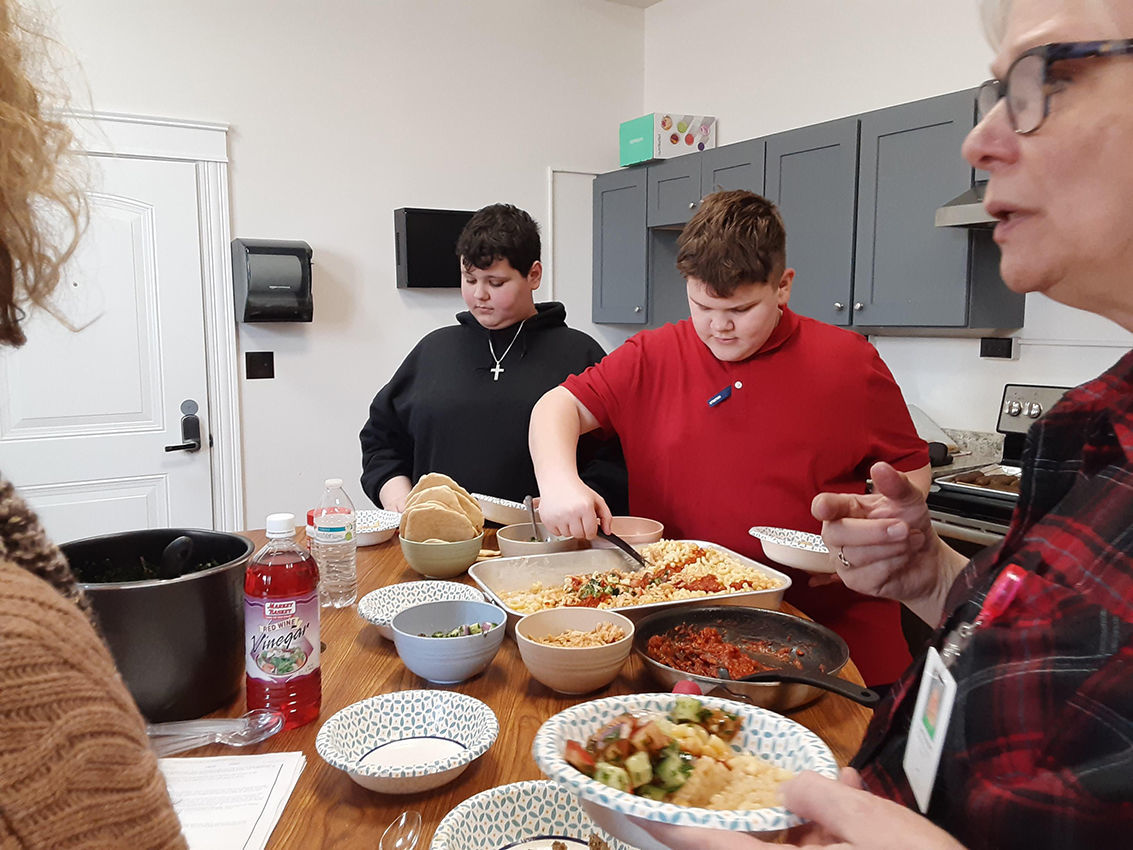 Savarus Ramirez (left) and Bentlei Madejo serve themselves food after a cooking activity that was part of a lesson on Egyptian history.

Jade Castor, 18, of Swanzey, speaks at a graduation ceremony June 19 at Ashuelot Valley Academy in Keene.

Jade Castor, 18, of Swanzey, receives her diploma from Cory Rogers, director of academics at the Ashuelot Valley Academy in Keene, during a graduation ceremony June 19.

Savarus Ramirez (left) and Bentlei Madejo serve themselves food after a cooking activity that was part of a lesson on Egyptian history.

As schools throughout the state transitioned to remote instruction this spring due to concern over COVID-19, a new special-education school in Keene remained open and celebrated its first-ever graduate.

“Basically, the decision was simple,” said Cory Rogers, the director of academics at Ashuelot Valley Academy. “Our kids are not the kind of kids that remote learning would be successful for. They’re also not the kind of kids that would benefit from an interruption in their schedules. … Consistency and routine [are] what they need to be successful. They need to know what tomorrow’s going to bring.”

Ashuelot Valley Academy, at 31 Washington St. in the former Keene Middle School building, opened last fall, and has 22 students in grades 5 through 12. As part of Plymouth-based Mount Prospect Academy Inc., the school serves students who require more services than public schools can provide, such as those with behavioral issues or who are on the autism spectrum.

Ashuelot Valley Academy has a staff of 28, who were instrumental to the school’s continued operations during the coronavirus pandemic, superintendent John Fulp said.

“People were so focused on the kids that it was almost like there wasn’t time to be fearful,” he said.

On March 16, Gov. Chris Sununu ordered all New Hampshire public schools to transition to remote learning, but the order did allow for private special-education schools, like Ashuelot Valley Academy, to remain open if they met certain size requirements and implemented health and safety measures.

“They basically said, ‘The types of students that we serve, it’s not going to work for them to do remote learning, so if you’re comfortable staying open, you folks are allowed to stay open,’ ” Fulp said. He added that the school worked closely with the state education department to develop policies based on state and federal health guidelines in order to remain open during the pandemic.

Those measures included daily temperature checks for everyone entering the building, and screening questions like whether staff, students and visitors had traveled recently or showed any COVID-19 symptoms. All staff members were required to wear masks, and an outside cleaning company sanitized the school daily, Rogers said. The school also began using as many disposable materials and kitchen utensils as possible to avoid potential disease transmission.

Despite all of these changes, Ashuelot Valley Academy completed its inaugural year last Friday, when the school also honored its first 12th-grade graduate, Jade Castor.

“I would have never graduated if I didn’t go to this school,” Castor, a Swanzey resident, said. “They just work with you and they help you out so much.”

Castor added that she struggled in her three previous years at Keene High School, but flourished when she started at Ashuelot Valley Academy last fall.

“I just really think it’s a great school, and it helps out a lot of people,” she said. “It changed my life.”

Castor, who is the first person in her family to graduate from high school, received her diploma in a small ceremony at the school last Friday, followed by a celebratory lunch for her family and school staff, who organized the event. The graduation marked the successful completion of Castor’s mission to complete high school, Fulp said.

“She came to us this year and was a really dedicated student — caring, kind, really focused on her mission,” he said. “ ... She was a friend to all, and just such a caring person.”

Rogers added that, in the face of the various disruptions caused by the COVID-19 pandemic, Castor stayed the course and did everything she needed to do.

“I’m very proud of her, and I was super excited that she was our first graduate,” he said.

Castor plans to become a licensed nursing assistant, with the ultimate goal of caring for seniors.

“I just love helping out people,” she said. “It just makes me really happy.”

The school typically takes students on field trips throughout the area, both as part of its curriculum and as rewards. Those trips came to a halt over the past few months, but as businesses around the state begin to reopen, Rogers said Ashuelot Valley Academy students and staff are excited to get back to these sorts of activities. They include a weekly blacksmithing class in Milford and a therapeutic horseback riding program through Cooper’s Crossroad in Keene.

“Those are sort of the things we couldn’t do during COVID,” he said. “So, the summer should be packed.”