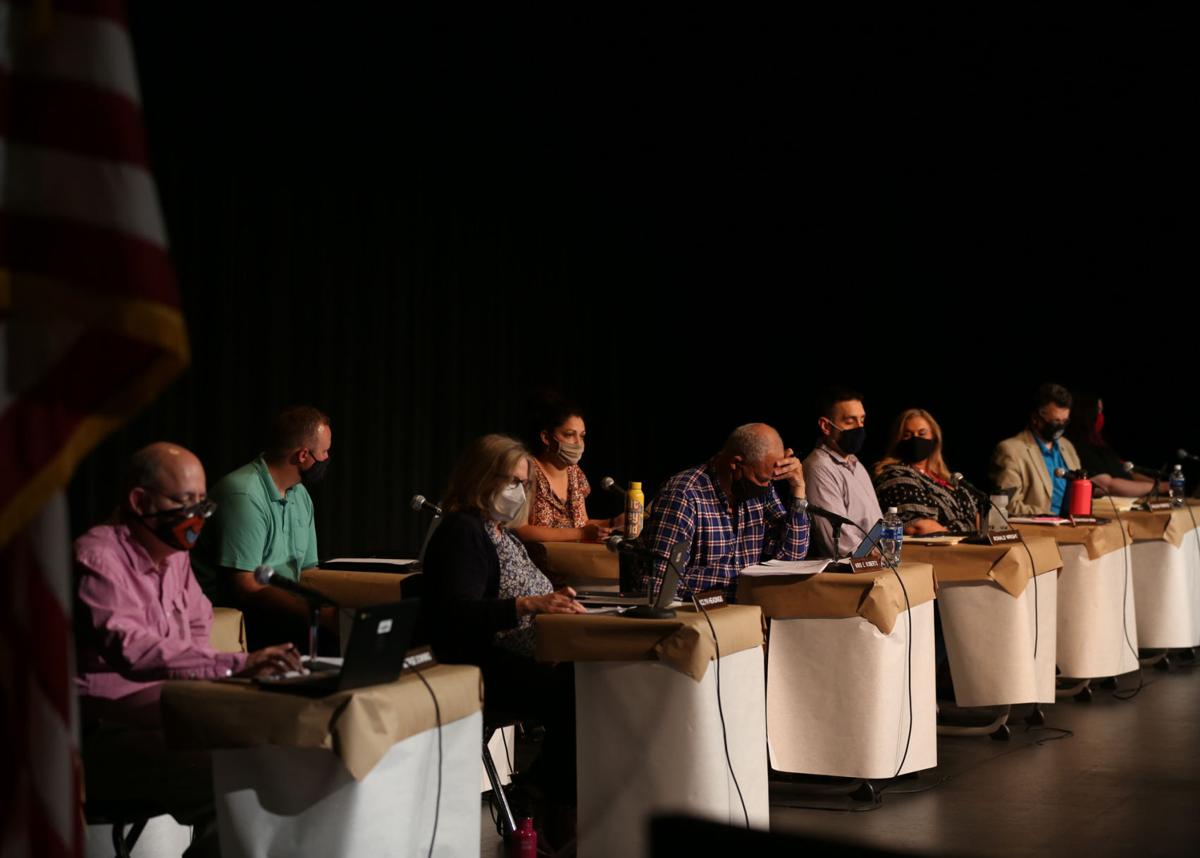 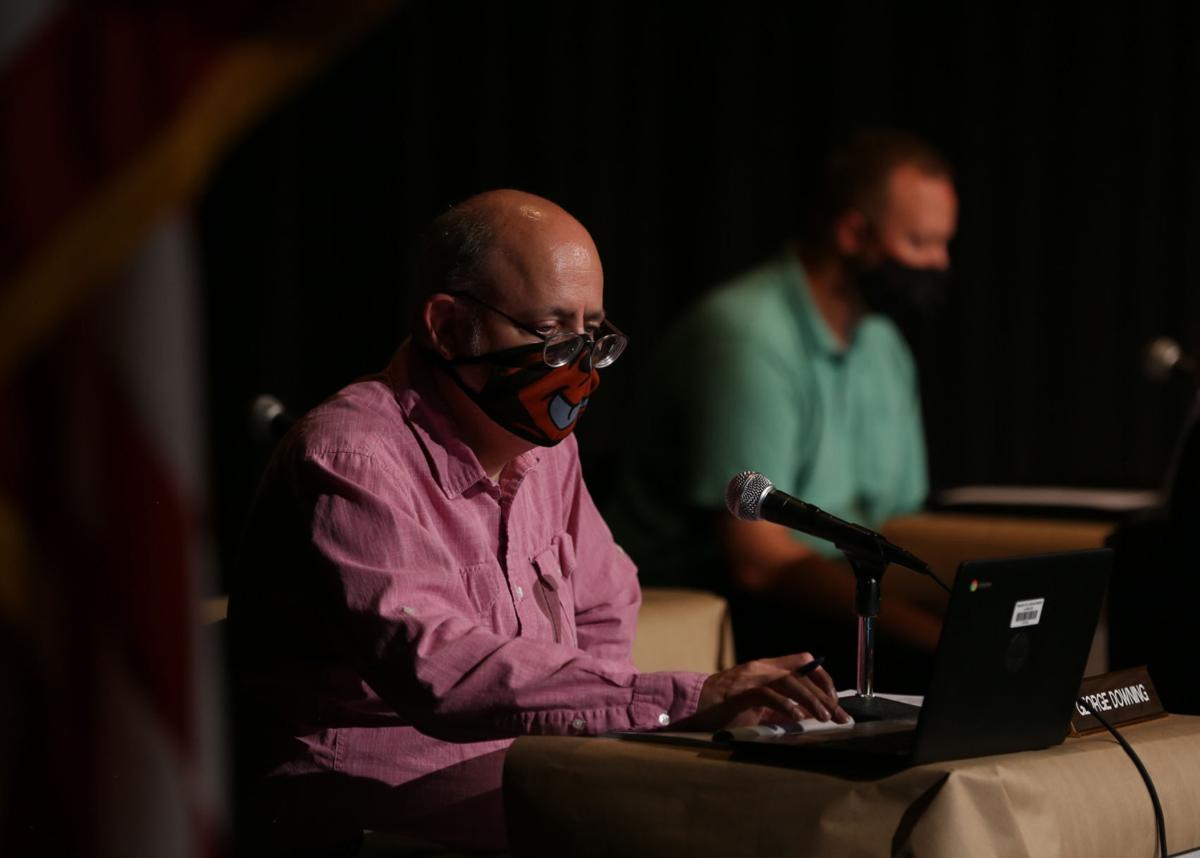 Keene Board of Education Chairman George Downing speaks to fellow board members during a meeting Tuesday in Keene High School’s auditorium, where the board opted to stay out of the latest court battle over New Hampshire’s school-funding formula, and to voice its opposition to proposed legislation that would cut off state funding to any entity that spreads “divisive concepts” about topics such as racism and sexism.

Keene Board of Education Chairman George Downing speaks to fellow board members during a meeting Tuesday in Keene High School’s auditorium, where the board opted to stay out of the latest court battle over New Hampshire’s school-funding formula, and to voice its opposition to proposed legislation that would cut off state funding to any entity that spreads “divisive concepts” about topics such as racism and sexism.

The Keene Board of Education on Tuesday became the latest group in New Hampshire to voice opposition to a bill before the Legislature that would cut off state funding for any school, business or organization that spreads “divisive concepts” about topics such as racism and sexism.

The board voted 7-1 during its meeting Tuesday evening to adopt a resolution opposing the legislation, which started as House Bill 544 but has since been incorporated into the House’s state budget proposal.

“We encourage our students to analyze current events and the historical context surrounding these events, and support our educators in speaking openly and honestly at all times,” the board’s resolution reads. “The language of HB 544 will suppress this open exchange of ideas and severely limit our students and educators in exploring diversity that is such a vital feature of our schools.”

The bill has drawn criticism from educators and businesses statewide. Roughly 250 businesses and organizations — including the Durham-based Oyster River School District and the Portsmouth School Board — have signed onto a letter from N.H. Businesses for Social Responsibility opposing the legislation as “antithetical” to Granite State values like diversity and inclusion.

Additionally, school boards in Concord and the Hanover-based N.H. School Administrative Unit 70 have passed resolutions opposing the bill, according to N.H. Public Radio.

Several local teachers told The Sentinel last week that they’re against the proposal and fear it could limit important conversations on topics like race and gender. At Tuesday’s meeting of the Keene school board, Chairman George Downing said he views the bill as attempted state government overreach.

“I find the entire concept of the bill to be problematic in that I don’t think it’s the purpose of our state Legislature to be telling us what we can and cannot be teaching in our schools,” Downing said during the meeting, which was held in the Keene High School auditorium. “It is poorly written, and as such can be used as a tool to suppress free speech across our schools in a lot of different ways.”

Robert Malay, superintendent of N.H. School Administrative Unit 29 — which covers Keene and six nearby towns — added that he has consistently opposed state mandates on what is and is not taught in schools.

But Kris Roberts, the lone board member to vote against the resolution, said he did not want to engage in the political process, which is often subject to shifts based on which party controls the Statehouse.

“We’re an educational organization, and I’m much more comfortable with us staying in the educational realm and not getting caught up with what the House does,” said Roberts, a former state representative.

Raleigh Ormerod, the board member who introduced the resolution opposing the “divisive concepts” bill, said that speaking out against the proposal is not political but rather a matter of promoting an inclusive culture in Keene schools.

“I don’t believe we should be supporting anything that restricts advancement of teaching ourselves how to better understand each other,” said Ormerod, who’s also a Keene City Councilor. “And I would oppose anything that puts restrictions on that. And so I’m thinking about it as a community action, and not as a political statement.”

The legislation, introduced by a trio of Republican state representatives, seeks to ban the propagation of ideas including that the state of New Hampshire or the U.S. is fundamentally racist or sexist, that “meritocracy or traits such as a hard work ethic are racist or sexist” and that anyone should feel guilt or any other type of psychological distress due to their race or sex.

Supporters of the proposal have expressed concern over the teaching of critical race theory, a scholarly framework that approaches the study of the United States through a lens of race and power and holds that systemic racism is a part of American culture. Backers of the bill have said this amounts to “indoctrination,” though critics of the proposal say that’s not what’s happening in schools.

Gov. Chris Sununu has said he does not support the bill, citing free speech concerns, according to NHPR.