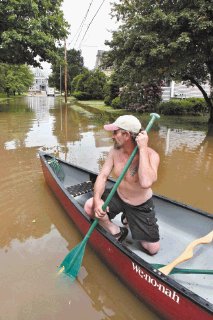 Alan Grout Jr. pauses while paddling a canoe on Gurnsey Street, his mode of transportation to the home he owns on Church Street, the day after the neighborhood was flooded by an overflowing Beaver Brook last month. 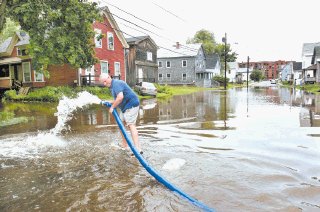 Mitchell H. Greenwald hauls a hose that was draining the basement of a house he owns on Church Street the day after the neighborhood was flooded by Beaver Brook.

Alan Grout Jr. pauses while paddling a canoe on Gurnsey Street, his mode of transportation to the home he owns on Church Street, the day after the neighborhood was flooded by an overflowing Beaver Brook last month.

Mitchell H. Greenwald hauls a hose that was draining the basement of a house he owns on Church Street the day after the neighborhood was flooded by Beaver Brook.

The City Council’s municipal services, facilities and infrastructure committee heard from a number of residents at its meeting, several of whom signed a petition asking city officials to address the flooding problem. City staff also presented data on the region’s topography and history of flooding.

The committee voted unanimously to have city staff report back as soon as possible with potential solutions, both short and long term. City Manager John A. MacLean told the committee he would make the matter one of his top priorities.

Public Works Director Kurt D. Blomquist and City Planner W. Rhett Lamb outlined the city’s intricate watershed system and warned the committee that action is needed to mitigate the flooding problem because of the increased frequency of severe weather events.

MacLean did not have a timetable for coming back to the committee, but said it would be as soon as possible.

Some of the residents who spoke had theories of their own about what causes, or exacerbates, flooding in Keene, including Maurice Whitney of Marlborough.

Kingsbury Corp., which recently closed, “built their building right through and over the (Beaver) Brook,” he said.

“Mr. Whitney is exactly correct,” he said. “Each and every flood, the water backs up against the Kingsbury building.”

Chabott also questioned why the city’s smallest culvert is located under Route 12 near Tire Warehouse, which he said creates a funnel effect.

Chabott said it’s time to “open up the brook” by clearing away brush and growth, which city officials have in the past said they cannot do due to environmental concerns.

David Copeland, a Church Street property owner, asked whether the city would be willing to buy the Kingsbury building and tear it down. City officials didn’t have a firm answer on that.

Stefan and Samantha Wilhelm, who own St. Martins Lane Cabinetmakers on Carpenter Street, also weighed in.

“I did a study of my own, and I do believe Kingsbury needs to go,” Stefan said. “I also went to the Beaver Brook Dam, and there is a spillway. Why not fill it in and leave a 12-inch opening at the bottom so the water can still flow through, but that would take 20 inches of water out of downtown Keene.”

Samantha Wilhelm said even “normal” rainstorms cause minor flooding on their property.

“We get water up to almost the height of our steps, which is about a 3-foot rise,” she said. “The fact that this happens in just a regular rainstorm is of concern to me.”

Michael Jablonski, who works for Whitney Brothers on Railroad Street, said city officials have to do something.

“We look at Beaver Brook as being a serious threat to our company’s future,” he said. “We’d really like to see the city give as much attention to this as it does to roundabouts, the BearCat (a controversial armored vehicle purchased by a federal grant), and the other things we see on the front page.

Andrew C. Geffert of Keene said there’s a need to slow the water down higher in the watershed, and suggested the city use wildlife to help do so.

“Maybe we could increase the beaver population along some of the small streams,” he said. “Beavers do their work for free.”

“We had plenty of (flood) storage available for what we expected to be a 2- to 4-inch storm,” he said. “As we tracked the storm, that first cell didn’t move out as expected, and actually grew over us.”

He pointed to reports from the U.S. Department of Homeland Security that say the frequency and intensity of severe weather events are on the rise.

With an early estimate of about $3.5 million in damages to Keene and the surrounding towns, well beyond the $1.77 million threshold for aid, it’s expected that the Federal Emergency Management Agency will qualify the region for public assistance, Lamoureux said.

FEMA also offers “individual assistance” in certain cases, and that process is ongoing to determine if residents here will qualify for additional aid, Lamoureux said.

He advised anyone with flood damage to contact officials by dialing 211, where they can record their damages and claims, he said.

“Even if the individual assistance doesn’t come through, there are other ways they can help you,” he said.

Lamb presented data that shows a drastic increase in major storm events in recent years, not just in the region, but nationwide.

“Clearly what we’re looking at is a trend,” he said. “And we need to begin to pay attention to it and develop some answers for it.”