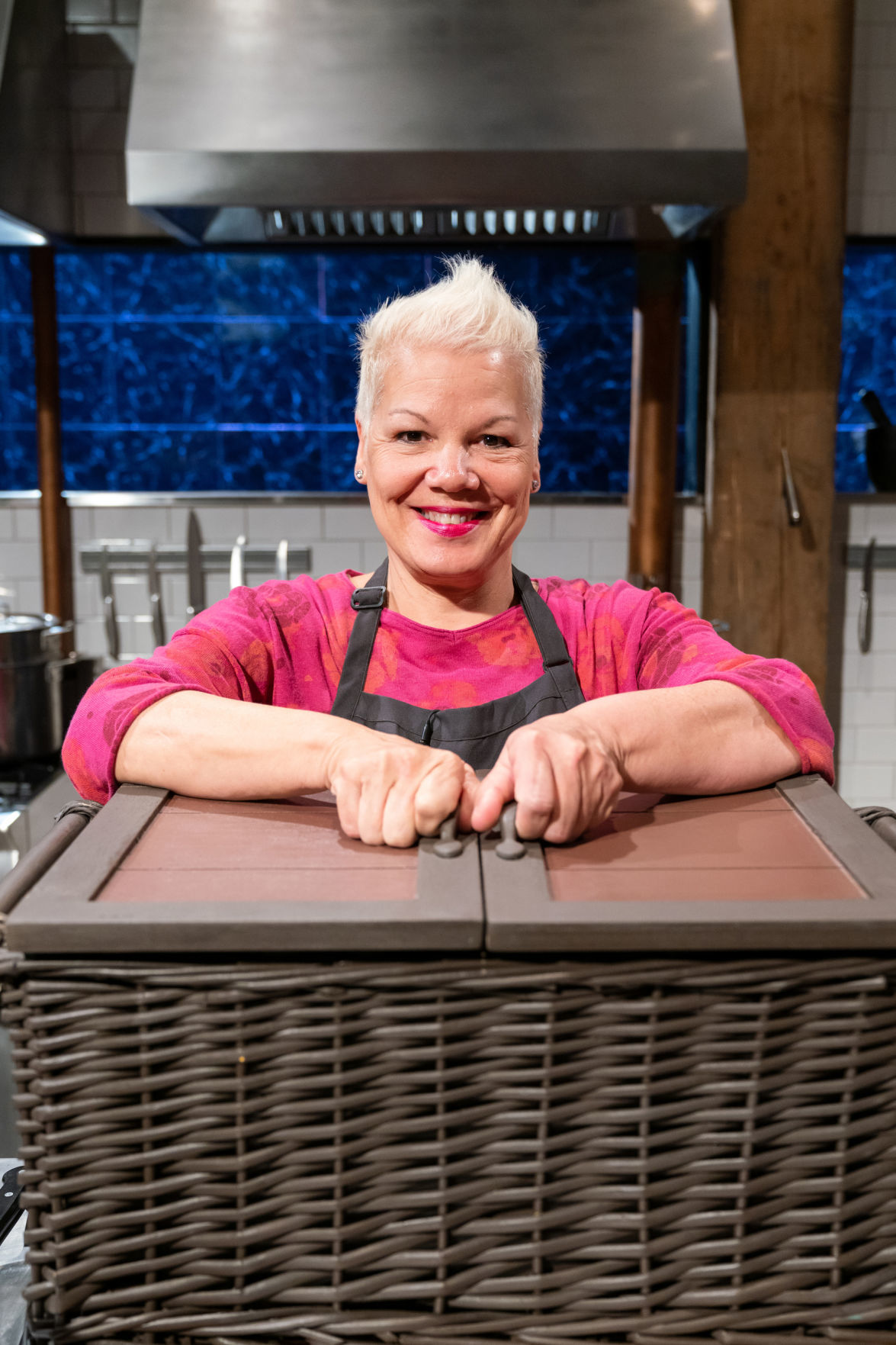 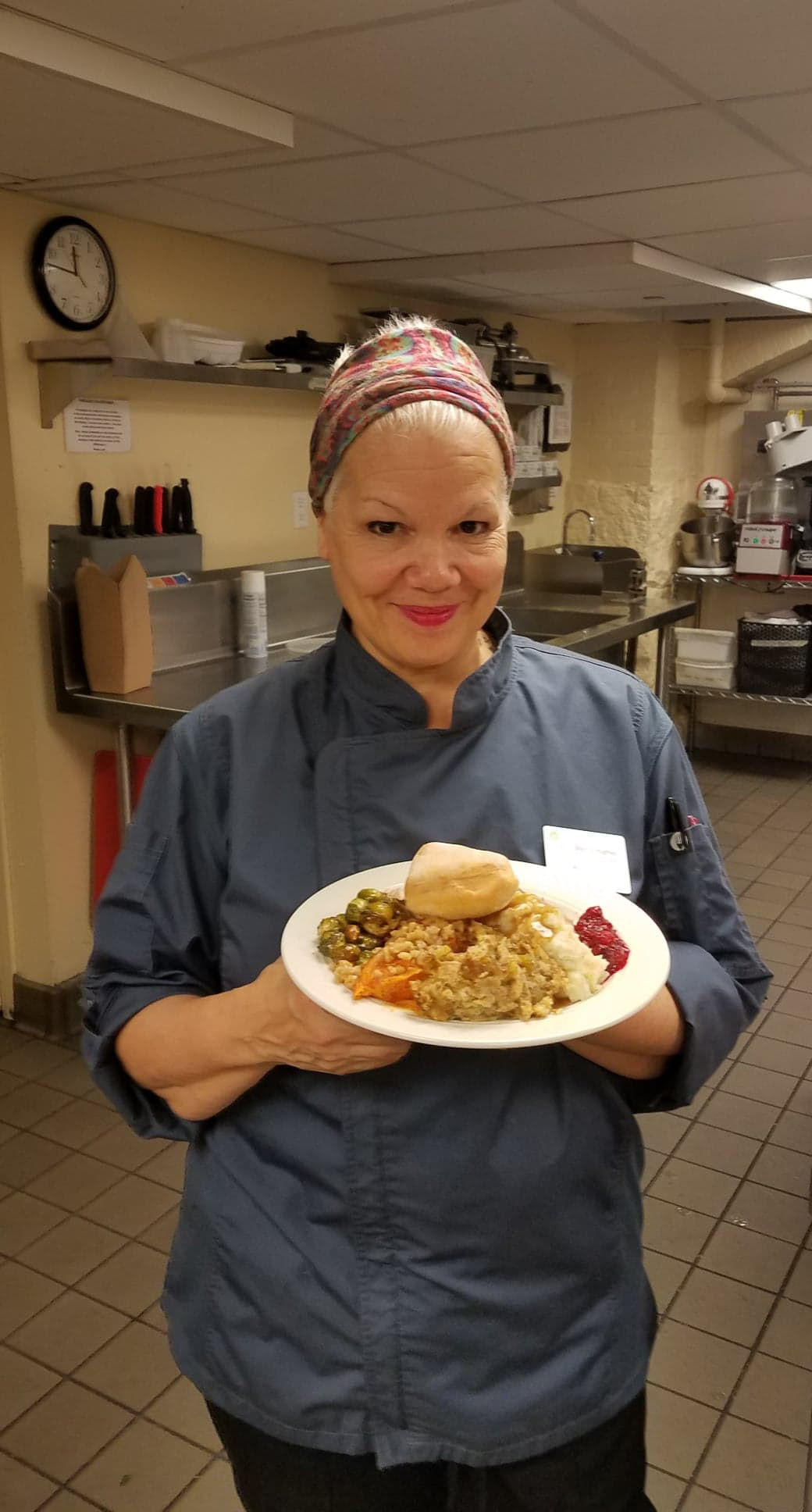 BOSTON — For Sherry Hughes, every day is like an episode of “Chopped.”

The Keene native is the kitchen manager and chef at Women’s Lunch Place in Boston, which provides free meals, medical care, clothing and shelter to women in need.

But with about 30 percent of the food for meals provided by donors, Hughes said creating entrees that are both healthy and tasty can sometimes be challenging.

“I never know what’s coming in,” she said.

This need to get creative with her cooking made Hughes, who now lives in Fitchburg, Mass., a perfect contestant for the Food Network show, according to her boss, Nancy Armstrong, who nominated her for it.

The show challenges four chefs to prepare a timed appetizer, entree and dessert using ingredients unknown to them before they start cooking, regardless of how unlikely they are. The winner, picked by a panelist of celebrity judges, receives $10,000.

“[The show] mirrors what Sherry does at the shelter,” Armstrong, director of operations, said. With the protein and produce provided, Hughes “has to look at it and think, ‘What can I cook with this?’ ”

Hughes will appear on the show Nov. 19 at 9 p.m., for the annual “Thanksgiving Heroes” episode celebrating chefs who serve their communities. The food is based around an “unforgettable Turkey Day meal,” according to information provided by the network.

“In a million years, I never would’ve thought I’d do something like that,” Hughes, 60, said. “This part of my life and this part of my career has taken me to amazing places.”

Before becoming a professional chef, Hughes had taken a different path.

With hopes to be a reporter, she attended Keene State College as a journalism and public affairs major in the late ’70s, but said she stayed for only one year due to the cost.

Most of her 20s were spent working in restaurants and kitchens, until she landed a job at WKBK Radio. She stayed on as a radio talk show host from 1990 to 1994, and then accepted a position in advertising at The Sentinel in 1995.

While at the newspaper, she worked in various roles, including reporter, columnist and food editor. But in 2012, after 17 years with the company, Hughes said, she was laid off, leaving her unemployed for about four months.

“I was bored, I wanted to get a job,” she said. “I was looking for my next fabulous job in journalism, but there aren’t many out there.”

So she thought of other avenues to pursue, with her love for cooking continuing to pique her interest.

A chef at heart since a young age, Hughes remembers standing beside her mother in the kitchen, infatuated with learning her signature Southwestern dishes.

“I always kind of came back to [cooking]. It was always what I loved to do the most,” she said. “I wasn’t really all that enthusiastic to go to [job] interviews that I had in the news business, but I was really excited to cook.”

With that in mind, Hughes attended the Cambridge School of Culinary Arts in Massachusetts, graduating in 2015. After a few other cooking-related jobs, she ended up at the Women’s Lunch Place.

She said the shelter is an ideal position for her, as she never pictured herself in the standard restaurant setting.

“I started culinary school when I was 54. I didn’t want to work in a traditional kitchen and work a million hours,” she said.

In addition, she said her work at the shelter gives her purpose.

“It’s a way to give back to the community,” she explained. “I get to do what I love every day in a way that’s really impactful.”

With the help of five staff members, as well as volunteers, Hughes prepares about 300 breakfasts and lunches daily. Her days start at 4:30 a.m., so she can be in Boston by 6:15 to prep for opening at 8.

And unlike at a traditional community kitchen, where meals are served through a line, Hughes said the shelter provides a sit-down restaurant setting for its patrons.

Meals are served on real china, with fresh flowers on each table, and Hughes noted she makes sure the food looks appetizing.

“We focus on healthy meals to help them get better ... we are also a scratch-kitchen, so everything we make there,” she said. “It’s restaurant-quality food, and we have a reputation. The ladies know to come there because they get really good food there.”

And though she has confidence in her cooking abilities, being on “Chopped” was never something Hughes thought she should do.

“I don’t know that I am competitive in the way that TV wants you to be,” she said, "but I knew it would be good exposure for the shelter.”

With consistent persuasion from Armstrong, Hughes said she agreed to start the lengthy interview process.

The show requires an application, several interviews with different Food Network producers and videos and photos to be sent in. Hughes found out she was accepted for the show in April and filmed that same month.

“Chopped” is filmed in New York City and is taped in one day, Hughes said. Just like the show portrays, she said the contest is fast-paced and high-energy.

“There are like 11 cameras, so many people on the set, and it’s really just about staying focused. You don’t have any time worrying about ‘What does my hair look like?’ or any of that stuff,” she said, laughing. “But, you’re on national TV, so you want to.”

Now seven months later, Hughes has not been able to tell anyone if she’s won the competition. However, she said she did better than she expected at creating recipes on the spot.

If she did win, Hughes said she would use a portion of the $10,000 for a “really nice, decadent lunch for the ladies.” Some of the rest, she said, would go toward travel for her and her husband, Barry Belotti, who also doesn’t know how she fared.

Regardless, she said, “it was the experience of a lifetime.”

This story has been changed to correct the number of meals Sherry Hughes prepares daily at Women’s Lunch Place in Boston.