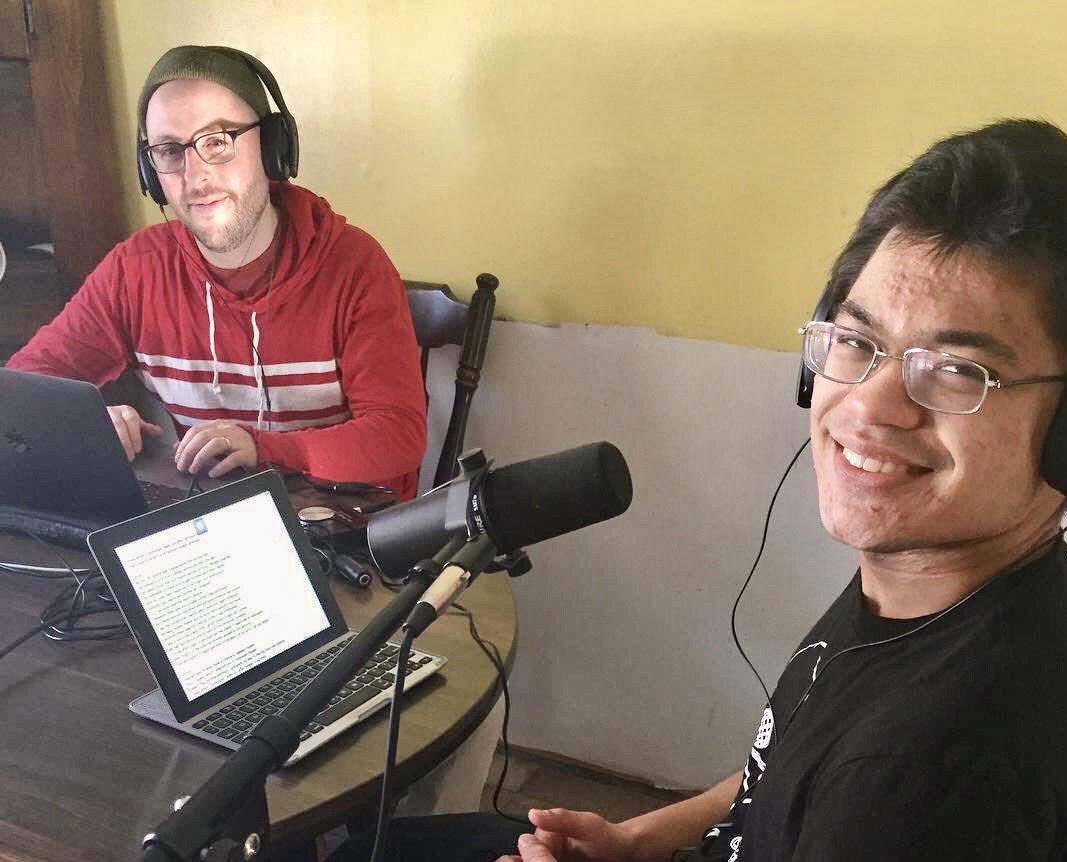 Adam Arnone, left, works on music with Derrick Pendilla. The two met four years ago, when Arnone rapped Pendilla’s reveal through the Make-A-Wish Foundation that he and his family would be receiving a Disney cruise. 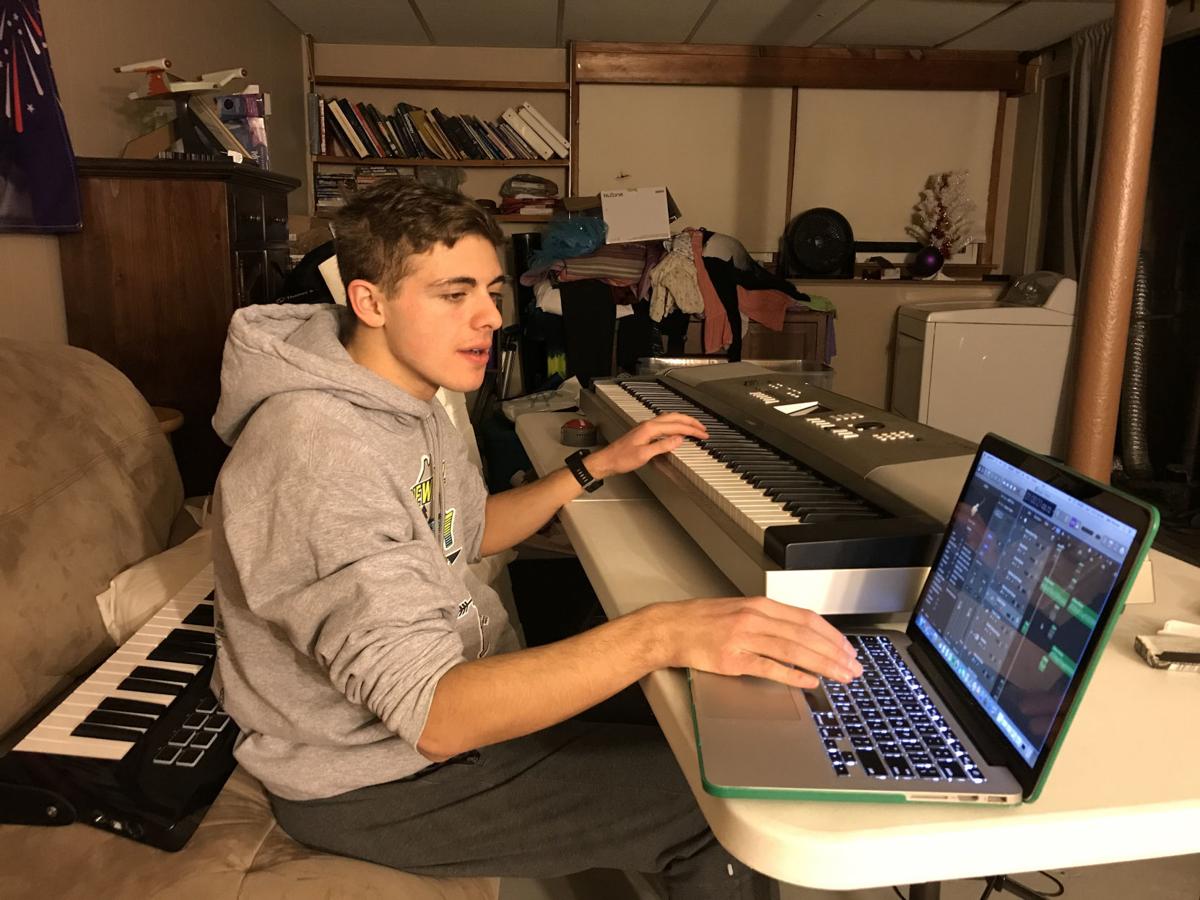 Jake Velazquez, shown here working on his album in his home studio in Keene, is a senior at Keene High School. He plans to attend UMass Lowell next fall and study sound recording technologies.

Adam Arnone, left, works on music with Derrick Pendilla. The two met four years ago, when Arnone rapped Pendilla’s reveal through the Make-A-Wish Foundation that he and his family would be receiving a Disney cruise.

Jake Velazquez, shown here working on his album in his home studio in Keene, is a senior at Keene High School. He plans to attend UMass Lowell next fall and study sound recording technologies.

Derrick Pendilla is a 22-year-old who has cerebral palsy and frequent seizures. Jake Velazquez is a Keene High School senior who was diagnosed with autism at age 4. Both love making music.

“When we work together, I think of the massive list of things they have to overcome to sit at the table — I just show up,” said musician/producer Adam Arnone of Keene.

Pendilla and Velazquez, both of Keene, are two of a handful of young people Arnone has worked with over the past few years to help them realize their dream of producing their own original music. Arnone offers these services on a sliding scale.

Neither young man lets his special needs define him. In fact, music-making is only one of their pursuits: Velazquez is a New Hampshire state champion cross-country runner; Pendilla, who uses a wheelchair, is an adaptive skier and volunteers with the New England Healing Sports Association to teach other young people the sport.

Arnone has an extensive background as a rap artist, recording artist and performer, currently as front man for Adam and the Flood.

Four years ago, he rapped Pendilla’s reveal through the Make-A-Wish Foundation that he and his family would be receiving a Disney cruise.

“He rapped, ‘You and your family have great news; you guys are going on a distant cruise,’ ” Pendilla recalled.

Arnone asked Pendilla to perform a song with him in return.

“One line I impressed him with was, ‘I’ll be your leader until I run out of lead/Ain’t gonna happen because I got a bunch of pencils under my bed,’ “ said Pendilla, who writes under the name Inspiration.

The lyric comes from “The Journey Has Just Begun,” now the title track of Pendilla’s album, soon to be released on Spotify. He and Arnone worked on it for the past two years at Pendilla’s home.

Arnone brought his mobile recording studio every Wednesday — and Pendilla wrote a song about it.

“One of the lines is, ‘I don’t need a music label/I got a recording studio at my dinner table,’ ” Pendilla said.

Velazquez met Arnone about five years ago at MoCo Arts’ summer creative arts camp, CAKE, where he was focusing on musical theater and where Arnone taught a songwriting class.

After working with Arnone every day at camp, Velazquez reached out to him to work on his songwriting one-on-one. Their work began with Velazquez creating a day-in-the-life video for his senior project of his experience at school, complete with an accompanying soundtrack.

Most recently under Arnone’s guidance — he also meets with Velazquez at his home — Velazquez wrote and produced an album under the name Jack Velcrow titled “Jack of All Trades,” released on Spotify last month.

Arnone’s working relationship with Pendilla and Velazquez is very different. With Velazquez, who taught himself to play the keyboard and whom Arnone taught to use recording studio software, Arnone mainly provides feedback.

“He tries to inspire me if I don’t feel like writing,” Velazquez said. “If I do have something in mind, he listens to it and tells me what’s good and what to change or add to sound even better.” Velazquez added that he especially enjoys layering different sounds in his music.

“The songs I made depended on what phase I was going through,” he explained. The album is a reflection of a teenager’s life: full of struggle, heartbreak and yearning for what the future holds.

Pendilla writes lyrics, and Arnone produces the music. Often, Arnone said, he can barely keep up with Pendilla’s prolific songwriting, which covers topics from what his seizures feel like to his close relationship with his younger sister. “Sibling Bond” is a song on the album that has an accompanying video.

Pendilla said he admires rappers who are versatile in style and substance, especially artists who can rhyme — his favorite part of songwriting.

“He’s not the slightest bit afraid or nervous to get it all out; he’s never not determined,” said Arnone, who noted that he has often seen Pendilla have a seizure in the middle of a recording session and then keep working.

Pendilla said he feels a responsibility in his songwriting, having defied the odds after doctors told him he’d never walk or talk.

A lyric in one of the songs on his album has to do with overcoming an obstacle and tells listeners they can’t go under or over it but through it.

“I’ll never give up on myself,” he said. “I can’t, because I need to keep moving forward for the kids I work with [through the New England Healing Sports Association]. I want to inspire them with my music.”

And he said he’s grateful to Arnone for showing him the way.

“He’s so knowledgeable in his career,” Pendilla said. “That he’s passing that down to me is amazing.”

He mentioned his song “Mentor and Protégé,” which is on the album.

“It’s a lot of showing off,” he said of the track, which features many highly technical rhymes. “That song makes me feel like I’ve made it, that we’re not just mentor/protégé — we’re peers.”

Arnone’s work with Velazquez inspired not only his choice to write and record music but also his college major. He’ll attend UMass Lowell next fall and study sound recording technologies.

“He helped me come out of my shell,” Velazquez said.

But Arnone, who treats both men like family, considers himself the fortunate one.

“They are being their best selves. The excitement comes from creating something, giving it shape and breathing life into these songs. My job in working with both of them is to just give them the space to exist in the way they just naturally exist,” Arnone said.

“The best part about them is they are not trying to be other people; both of them have this ability to make music that’s so honest to who they are.”