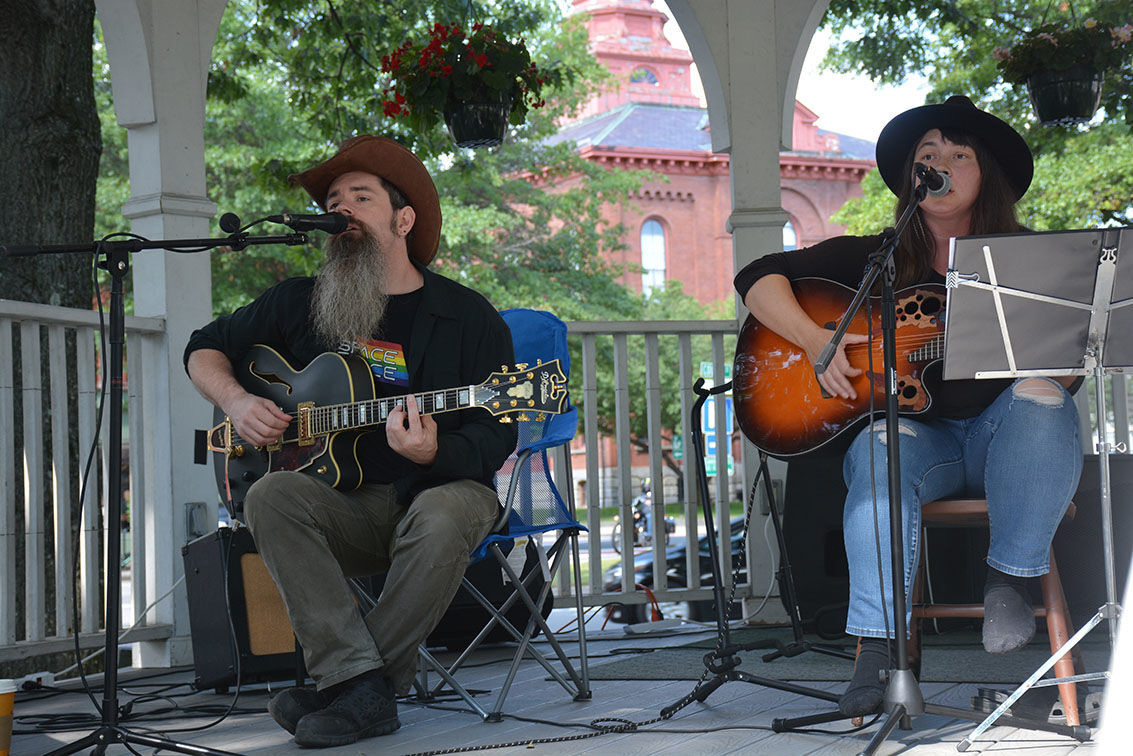 Jess Hutchins (right) and Geoff Williams, both of Nelson, perform Saturday morning as part of the opening act of the Keene Music Festival. 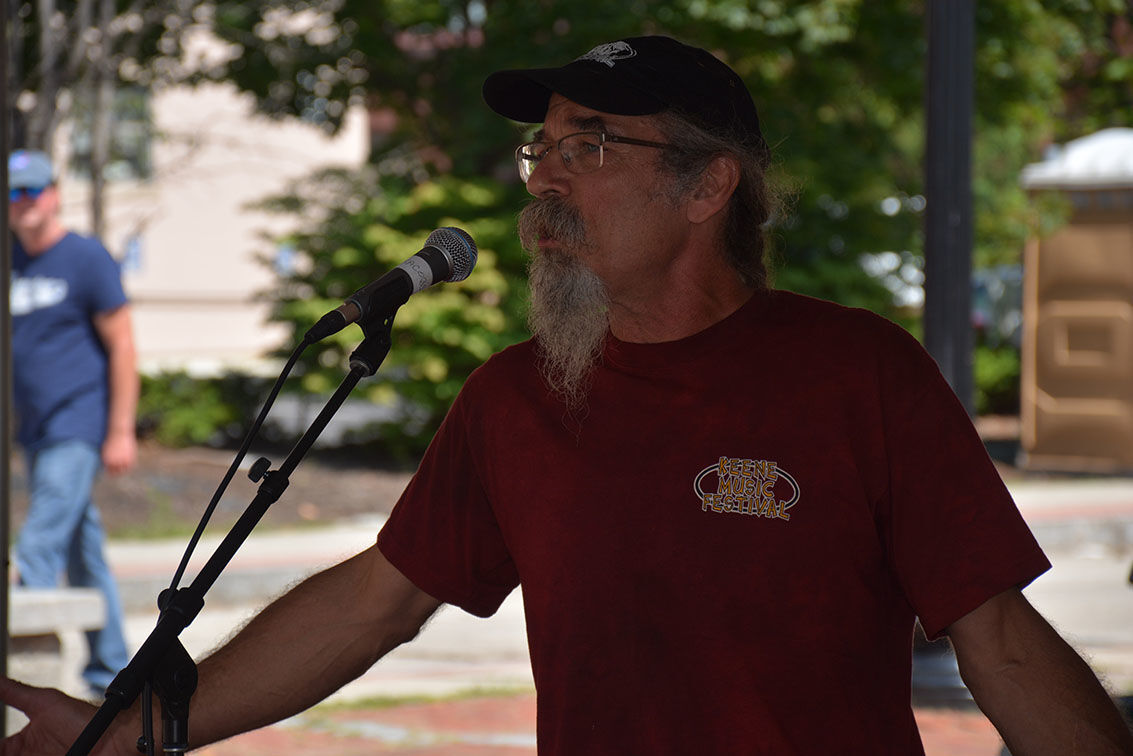 Pablo Fleischmann of Marlow, director of the Keene Music Festival, performs with local band Earth Colony on Railroad Square during the festival Saturday afternoon. Fleischmann, who has been involved with the event since its inception in 2000, said it’s his favorite day of the year in downtown Keene. 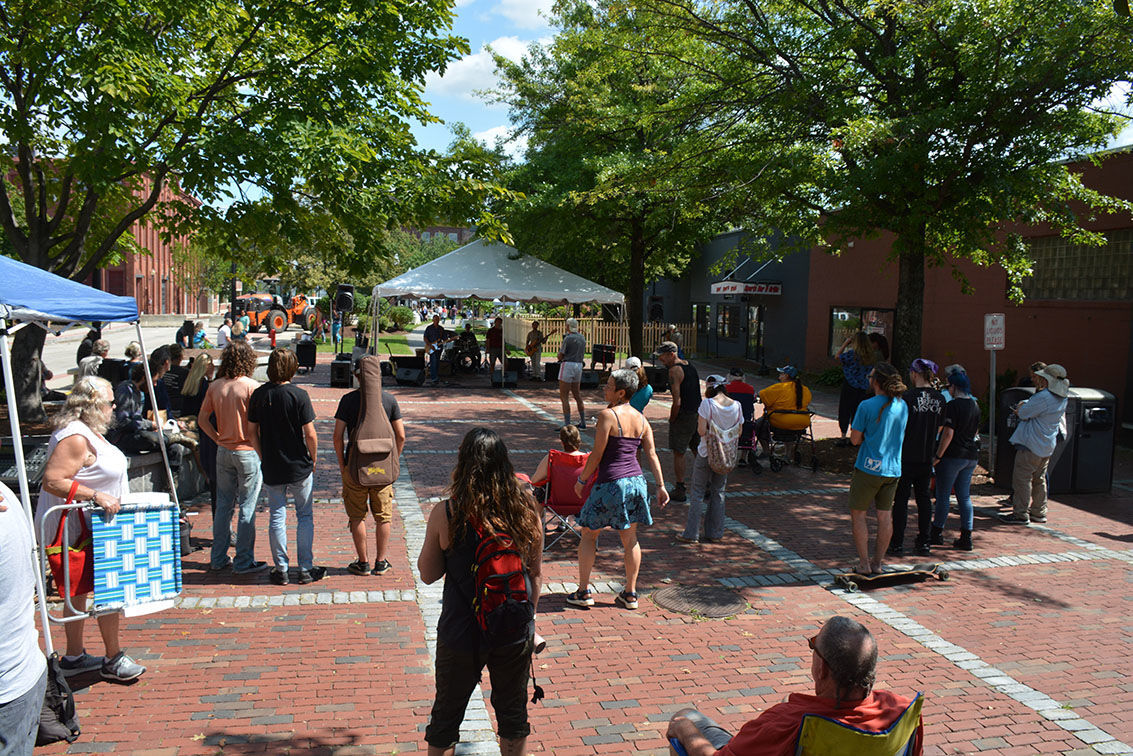 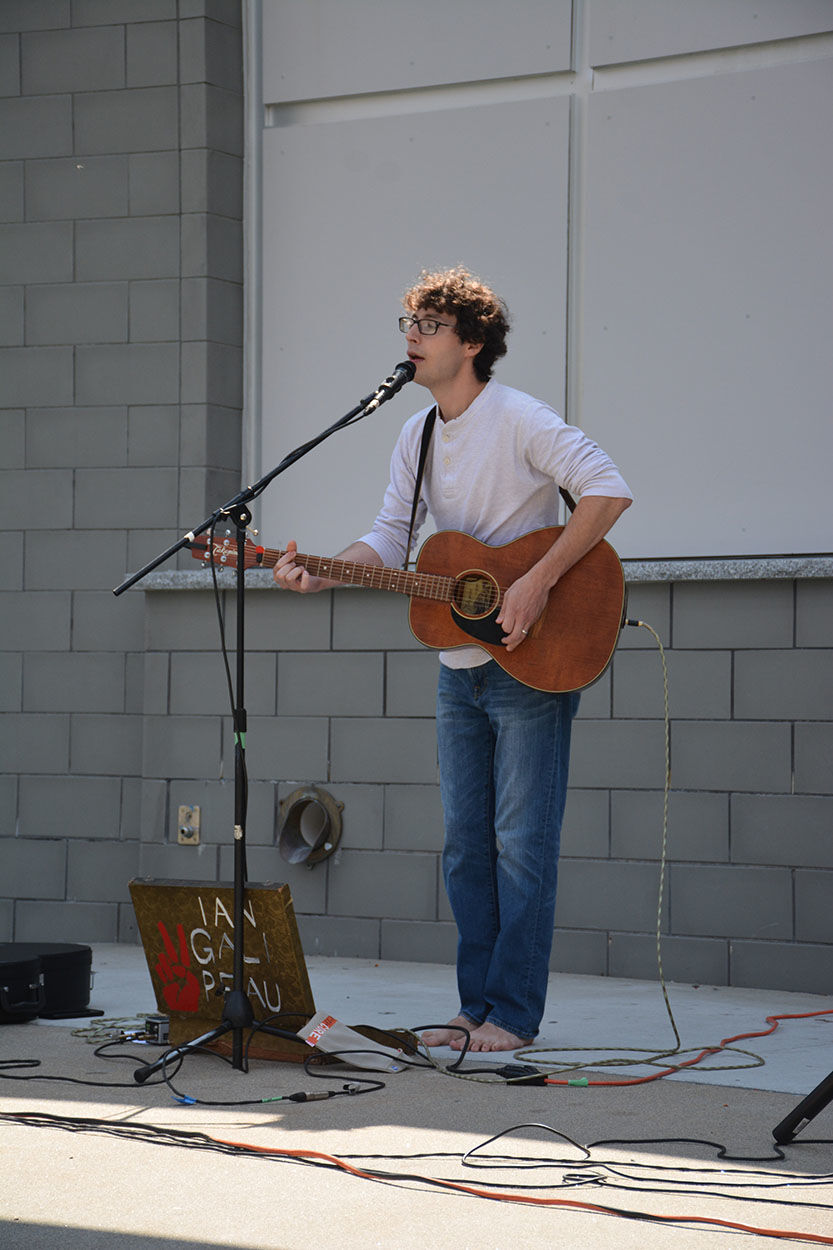 Ian Galipeau of Keene performs in the amphitheater at the

Jess Hutchins (right) and Geoff Williams, both of Nelson, perform Saturday morning as part of the opening act of the Keene Music Festival.

Pablo Fleischmann of Marlow, director of the Keene Music Festival, performs with local band Earth Colony on Railroad Square during the festival Saturday afternoon. Fleischmann, who has been involved with the event since its inception in 2000, said it’s his favorite day of the year in downtown Keene.

Ian Galipeau of Keene performs in the amphitheater at the

At 11 a.m. Saturday, Jess Hutchins sat down in a wooden chair in Keene’s Central Square gazebo, guitar in hand, and began to play.

Flanked by fellow Nelson residents Geoff Williams and Mark Grover, the trio performed Hutchins’ original song “Dream with Me,” the first tune of the Keene Music Festival in two years, after the COVID-19 pandemic forced the cancelation of last year’s event. The three have been playing together for about a year, but Saturday marked their first public gig, an experience Hutchins said was exciting, if a bit nerve-racking.

“I’m excited, though,” she said. “Like I said, we’ve been working on this for a year. We haven’t really shared a lot of this with anybody. So this is kind of our debut.”

As they played, a crowd gradually grew to about 20 people. Pablo Fleischmann, the festival’s director, was among them, and said he relished being able to bring the event back to downtown.

“It’s fantastic,” said Fleischmann, a Marlow resident who owns Green Energy Options in Keene. “... It’s my favorite day of the year in downtown Keene. To walk around and hear live music just emanating from all over is just a beautiful thing.”

Fleischmann has been involved with the festival since its inception in 2000, he said, and has worked with a small group of volunteers to keep it going over the years. This year, a group of six organized the Keene Music Festival, which they initially planned to be a scaled-down affair, Fleischmann said.

“Originally, when we were planning this, there was a full-fledged pandemic, and just barely vaccinations going on,” he said. “So, we said, ‘Well, why don’t we just do three stages and a few bands?’ And the bands, when we put it out to the band population, everyone was just so excited to play, it turned into pretty much a typically normal-sized event.”

From 11 a.m. to 10 p.m., 52 artists played across seven stages throughout downtown: at Railroad Square, Miller Brothers Alley, Lamson Street, the Central Square gazebo, City Tire, The Toadstool Bookshop and the Monadnock Food Co-Op amphitheater. One of those musicians, Ian Galipeau of Keene, said it felt great to play his acoustic indie folk music for a live, outdoor audience again.

“This weather is perfect,” he said after wrapping up an hourlong set at the Monadnock Food Co-Op. “It feels wonderful to be playing again. I took most of the last year off, like pretty much every musician. And it’s just great to be able to see live music and to have a crowd without being afraid, or feeling like you’re compromising the health of yourself or your community.”

“It’s like it’s even better than before, because having that break, it sort of gave everyone a fresh start,” Elliot said after the band’s performance on Railroad Square. “So I think everyone’s got a lot of energy and enthusiasm for it. And that feels really good.”

Shortly after Blue Motel ended its set Saturday afternoon, six-year-old Violet Deaver sat in the shade of a nearby tree, enjoying a pumpkin muffin from The Works Café with family friend Amy Trippodi. They were “out and about doing stuff,” Violet said, and decided to stop and catch a few musical acts, including a punk rock band and an acoustic guitarist.

“We’ve heard a little bit of music from a few bands, and I’ve liked it so far,” Violet said.

“And I was telling Violet, this is something that we look forward to every year,” Trippodi added. “It’s Art in the Park and the Keene Music Festival. They’re just really great community events. And I think everybody’s ready to be outside in nice weather, listening to great music.”

The Keene Music Festival was one of several events on a bustling Saturday downtown. Art in the Park, organized by the Monadnock Area Artists Association, returned to Ashuelot River Park Saturday and Sunday. Nearby, the Keene Farmers’ Market drew a crowd for its regular hours on Gilbo Avenue.

For Jayna Leach, a Keene resident who studies violin at the Boston Conservatory at Berklee, the confluence of events is a highlight of the whole year in the Elm City.

“I just so happened to be here this weekend,” she said. “I was in Boston yesterday, and I had a gig that canceled, so I decided to come up for this because I love this. And it’s also Art in the Park weekend, so it’s my favorite weekend in Keene, and I’m never here for it.”

As an artist herself, Leach said the weekend holds special interest but also serves as an opportunity to catch up with old friends.

“I love anything that Keene has, any community stuff,” she said. “It’s great to see everybody coming out, just people that I wouldn’t normally see anyways. And I love especially that [the music festival is] happening all the way down [Main Street], so you get one thing, and then you get another thing everywhere else, and it keeps changing.”

“We’ve settled in on the Saturday of Labor Day weekend mostly to help the downtown merchants, which, I think it helps them,” he said, noting that the music festival kept its tradition this year of excluding outside vendors to keep the spotlight on local shops and restaurants.

Tim Pipp, owner of Beeze Tees Screen Printing on Main Street, said the music festival certainly provided a boost for his business, especially after the coronavirus pandemic led to slower foot traffic throughout most of the past year and a half.