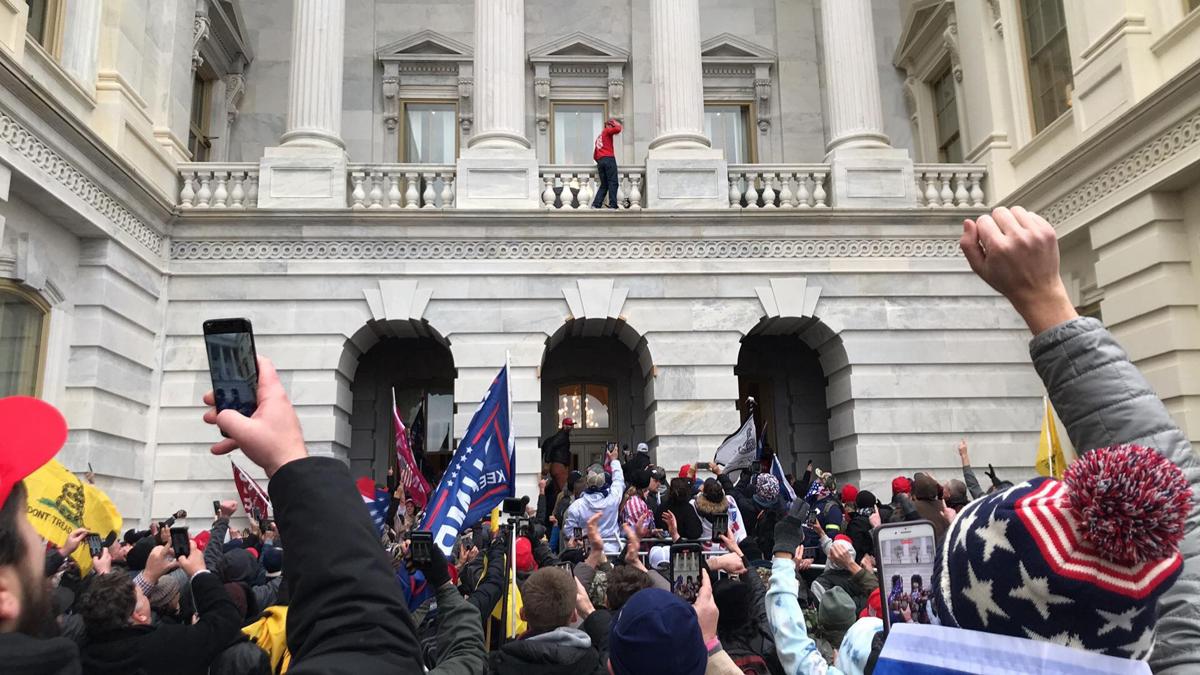 A rioter stands on the railing along one of balconies of the U.S. Capitol in Washington, D.C., Wednesday in a photo taken by Keene resident Jason Riddle. Below, Troy Police Chief David Ellis is pictured in his office. 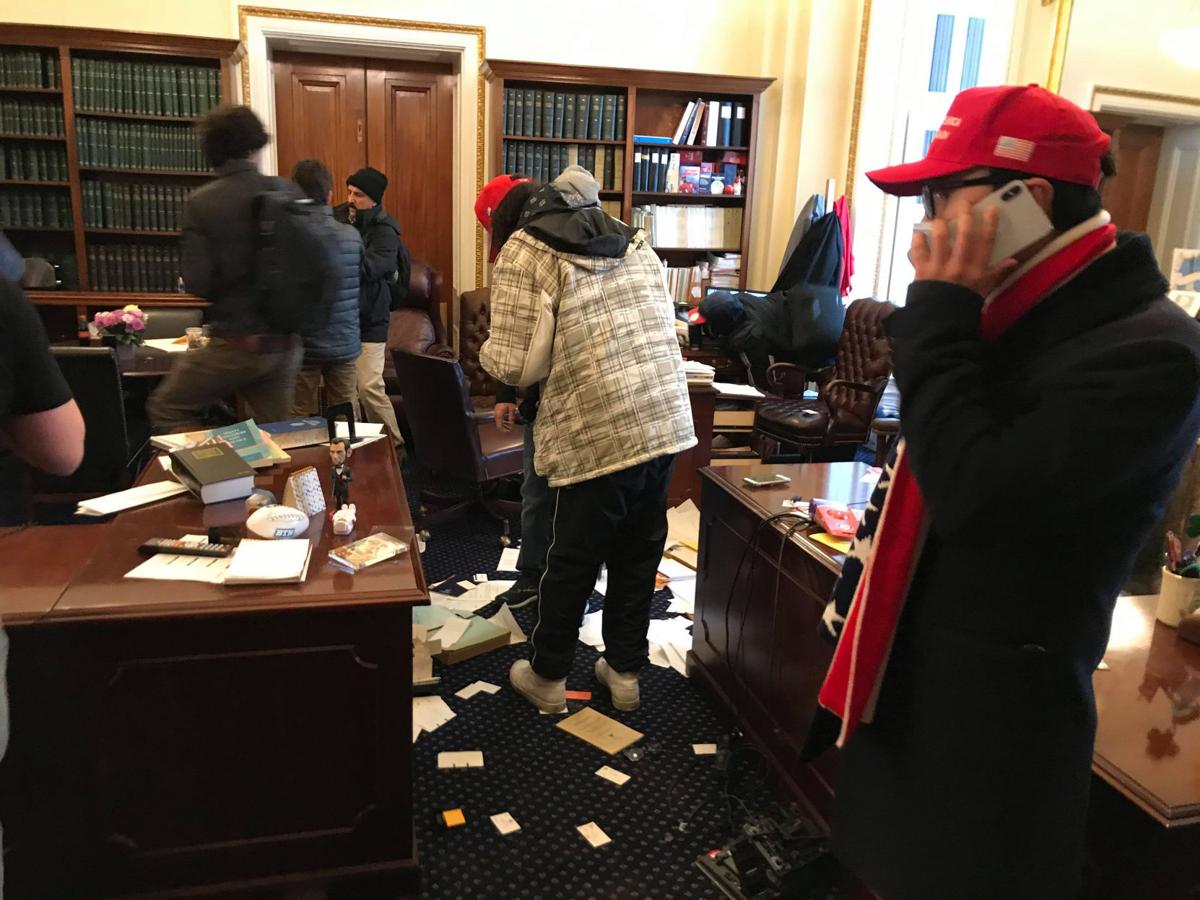 Some of those who gained entry to the Capitol Wednesday began destroying property and trashing rooms. According to Jason Riddle, they smashed electronics, threw things around and broke windows. 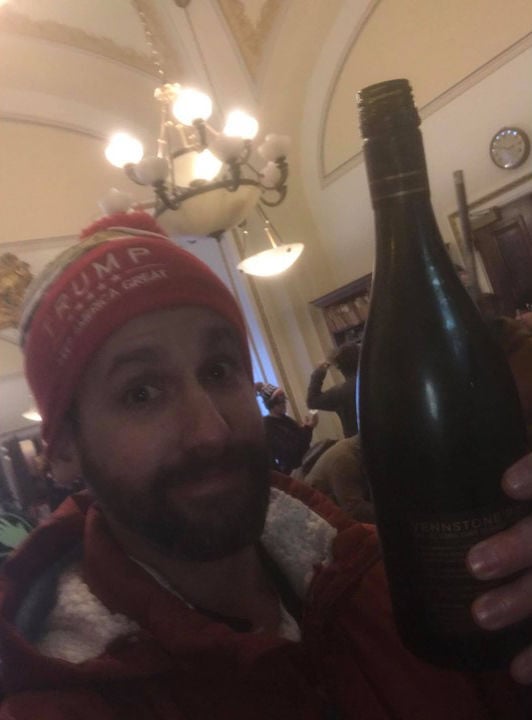 Jason Riddle poses with a bottle of wine he said he found inside the Capitol. 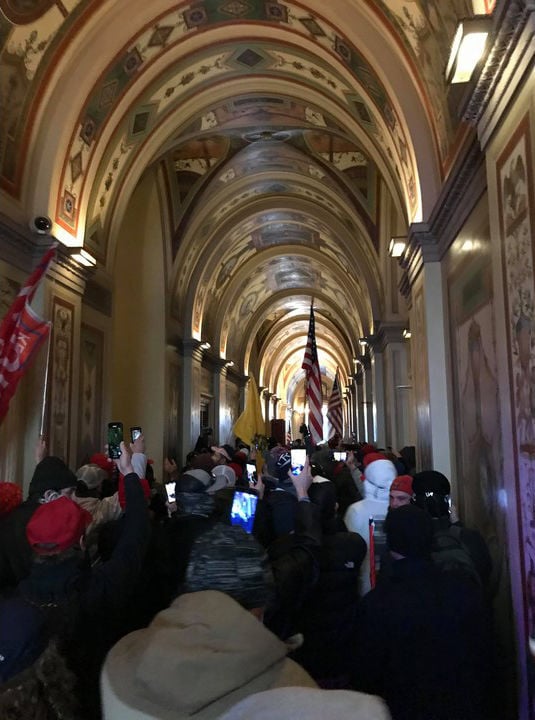 Rioters gather inside the Capitol building after forcing their way in. 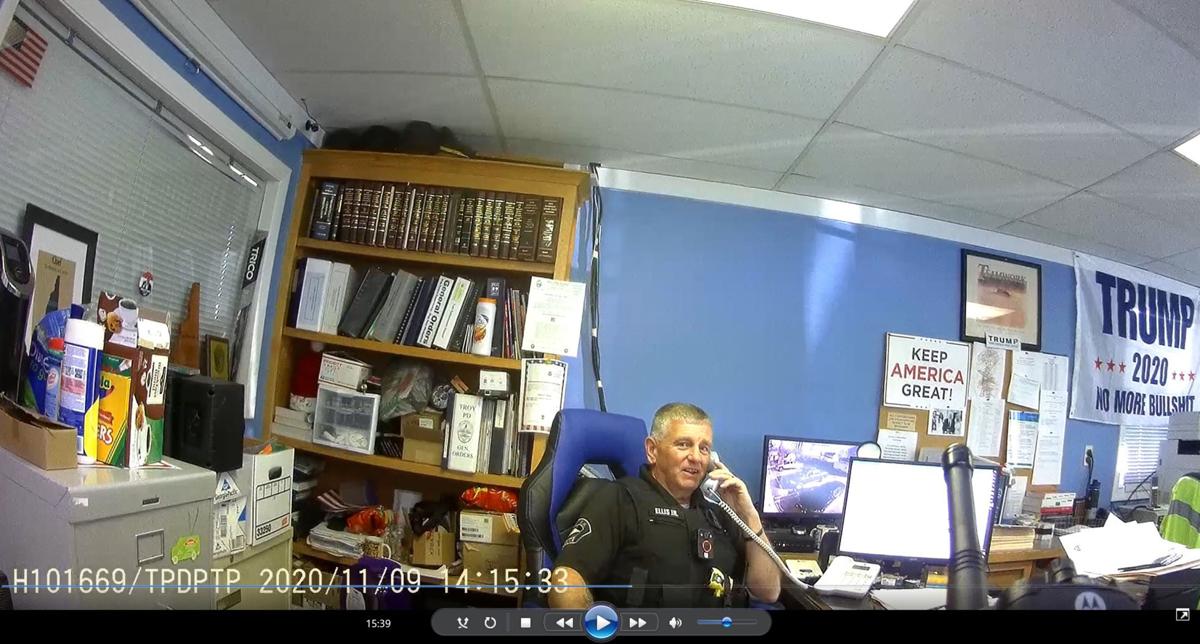 A rioter stands on the railing along one of balconies of the U.S. Capitol in Washington, D.C., Wednesday in a photo taken by Keene resident Jason Riddle. Below, Troy Police Chief David Ellis is pictured in his office.

Some of those who gained entry to the Capitol Wednesday began destroying property and trashing rooms. According to Jason Riddle, they smashed electronics, threw things around and broke windows.

Jason Riddle poses with a bottle of wine he said he found inside the Capitol.

Rioters gather inside the Capitol building after forcing their way in.

At least two area residents, both with law enforcement backgrounds, participated in Wednesday’s protest in Washington, D.C. — and one of them was among the crowd that stormed the Capitol building — although both have condemned the violence that took place.

Jason Riddle — a former mail carrier and former corrections officer who lives in Keene — entered the building after it was breached by rioters. Meanwhile, Troy Police Chief David Ellis’ presence at the protest has drawn a call from the N.H. Democratic Party for the chief to resign.

Five people died amid the chaos, including a U.S. Capitol Police officer.

Ellis was quoted by Intelligencer, a web publication run by New York Magazine, where he identified himself as a supporter of President Donald Trump but also criticized the destructive mob and decried the treatment of the Capitol Police.

Ellis said in the Intelligencer story that he thought the effort to overtake the Capitol “was not going to solve a thing, and then to see the police get treated the way they were treated, it’s ridiculous.” The story, which doesn’t specify exactly where Ellis was during the interview, described him as the only person interviewed to express displeasure with what was occurring at the Capitol building.

Still, Ellis told Intelligencer he didn’t regret his decision to attend the protest. “There’s a lot of Trump supporters that are awesome people,” he told the publication. “Like me.”

Efforts to reach the chief were unsuccessful Thursday and Friday morning. He is expected to be back in town Friday, according to the Troy Police Department.

Richard H. “Dick” Thackston III, chairman of the Troy selectboard, said the board has been contacted by several dozen people calling for Ellis to be fired. But he said he doesn’t think the chief’s presence at the protest will affect his employment with the town (the police chief is a position appointed by the selectmen). Most of the people calling for his termination have been from outside Troy, according to Thackston, who said town residents have largely been supportive of Ellis’ right to express his opinion.

“I ... know, like and trust Dave Ellis; he’s an honest, hard-working guy,” Thackston said. “He has nothing but the best interests of our community at heart.”

However, Thackston also condemned those who participated in the storming of the Capitol, calling the behavior “absolutely appalling.”

Ellis told NHPR he complied with that directive and would not have hung the items if he knew it was against the law. Cheshire County Attorney Chris McLaughlin could not be reached for comment Friday morning, nor could a N.H. Department of Justice spokeswoman.

On Wednesday, a massive crowd gathered in Washington to protest as Congress convened to certify former Vice President Joe Biden’s victory in the 2020 presidential election. That afternoon, the protest turned to rioting as many breached the Capitol building. Riddle, the local mail carrier, said the rioters first gained access to the building via scaffolding that was positioned near the walls.

Lawmakers, including the four members of New Hampshire’s congressional delegation, were safely evacuated from the Capitol.

Riddle said he went to D.C. to participate in the protest, believing the election had been stolen from Trump. But despite being among those who entered the Capitol, and posting photos on Facebook, he described the violence he witnessed inside as “chaos.”

He said rioters and law enforcement were exchanging blasts of what he described as Mace even before the crowd overtook the building. He remembered police throwing “tear gas grenades” and said one rioter had loaded Mace into a fire extinguisher, which he was unleashing on police.

“It was horrible,” he said. “I felt so bad for the police officers; they were getting Maced just as much as the protesters.” He also expressed sympathy for Ashli Babbitt, a 35-year-old Air Force veteran from San Diego, who was shot by Capitol Police inside the building and later died. Riddle added, “Breaking through doors is not the answer, you know?”

Asked why he entered the Capitol despite being put off by the violence, Riddle said he simply “wanted to see it.” He said the people inside were smashing windows, computers, printers and throwing things around. A photo he provided to The Sentinel shows a trashed office with debris strewn across the floor.

Riddle said his only involvement in the chaos was finding a liquor cabinet and pouring himself a glass of wine. He said he left the building sometime between 3 and 4 p.m., once efforts to disperse the rioters began in earnest. “I booked it,” he said. “I didn’t go there to get arrested.”

Riddle was a mail carrier in Keene until resigning Dec. 31, according to USPS spokesman Steve Doherty. On Thursday evening, Riddle posted to his Facebook page that he plans to run for Cheshire County commissioner in the second district, which covers Roxbury, Keene and Marlborough.

“I had to drop out of the 2020 race due to my employment at the post office,” he said when asked why he decided to announce a run for the board. “I want to carry on my mission to help our county.”

Riddle said he believes Trump had wanted his supporters to protest but doesn’t feel Wednesday’s violence is what the president was after. He said his fellow Republicans should “calm down” and said rioters accomplished nothing by using violence to take the Capitol.

Since the election was called for Biden several days after polls closed on Nov. 3, Trump has been challenging the results without providing factual evidence, and nearly all of his campaign’s or allies’ approximately 50 lawsuits alleging voter fraud have been dropped or dismissed by courts, according to the Associated Press. The Supreme Court also declined to hear cases aimed at invalidating election results in some states, the AP reported. Wednesday’s demonstration turned violent shortly after the president addressed his supporters.

“...We are going to the Capitol, and we are going to try and ... give our Republicans, the weak ones because the strong ones don’t need any of our help, we’re ... going to try and give them the kind of pride and boldness that they need to take back our country,” Trump said in the conclusion of his speech Wednesday.

The violence resulted in the deaths of five people, including a U.S. Capitol Police officer, and more than a dozen were injured, according to NPR. Congress suspended the debate about the election results and later reconvened to certify them.

U.S. Rep. Annie Kuster, D-N.H., issued a statement Thursday calling on Trump, who has less than two weeks left in his term, to be removed from office because of the events that unfolded Wednesday afternoon. Sen. Maggie Hassan, D-N.H., issued a similar call and also urged the president to resign, according to seacoastonline.com. Sen. Jeanne Shaheen, D-N.H., said Thursday on Twitter that she believes Trump is “unfit for office” but had not explicitly called for his removal as of Friday morning.

Said Kuster, “The violence he incited yesterday undoubtedly played a central role in the insurrection at the U.S. Capitol. People in America and around the world watched in horror as a mob of pro-Trump domestic terrorists invaded and attacked the U.S. Capitol.”

This article has been changed to add the date Jason Riddle left the postal service.