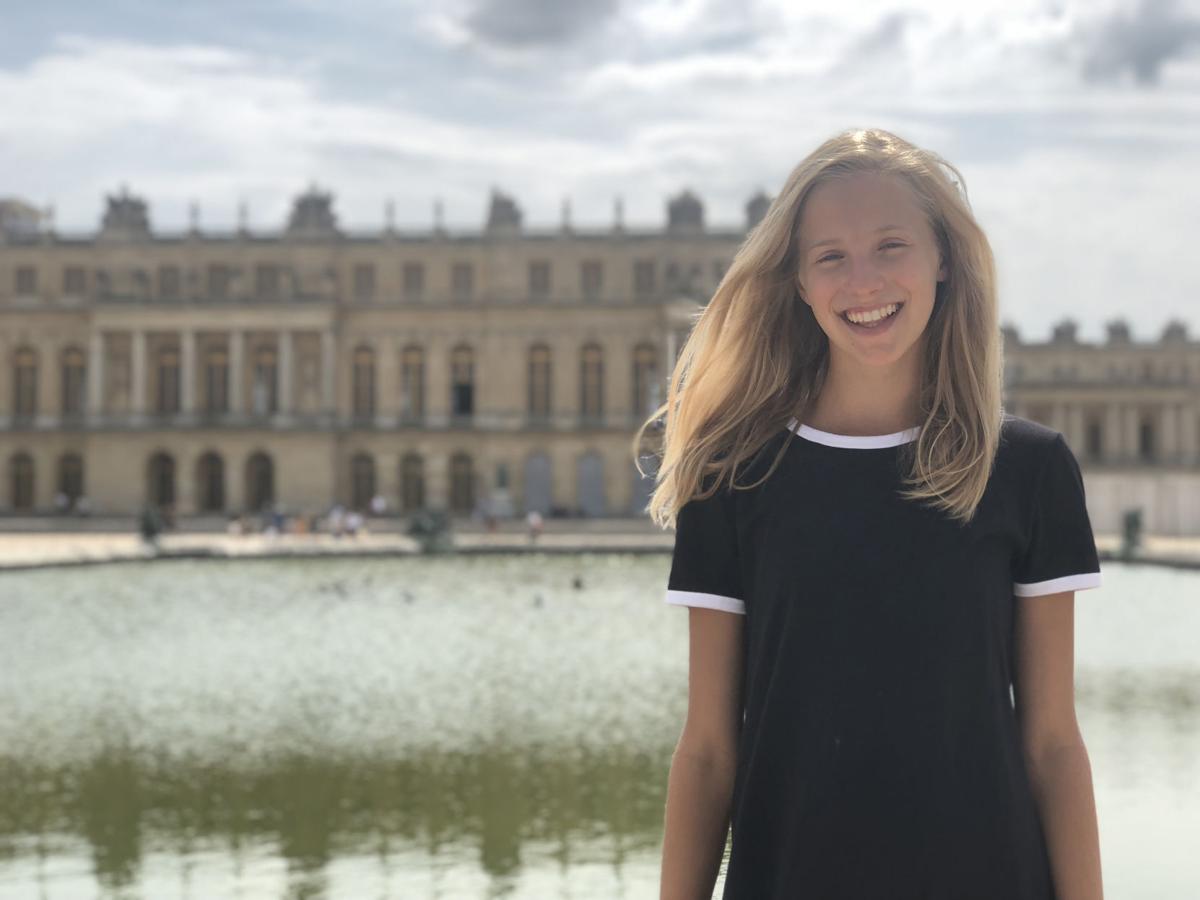 Amelia Opsahl visited France for five weeks in summer 2018. Here, she’s shown with the Palace of Versailles in the background. 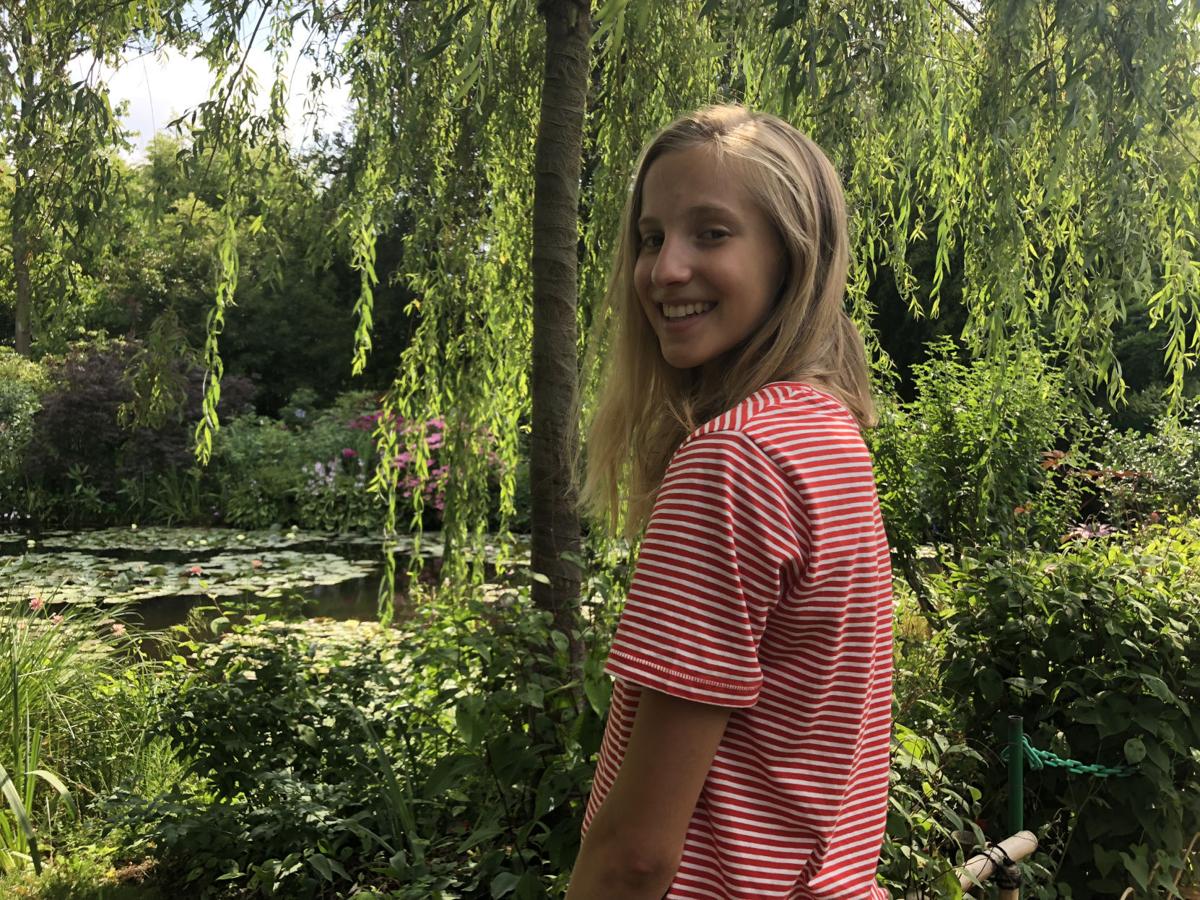 Amelia Opsahl takes in Impressionist painter Claude Monet's famed gardens in Giverny, France, during the five weeks she spent in the country in summer 2018. 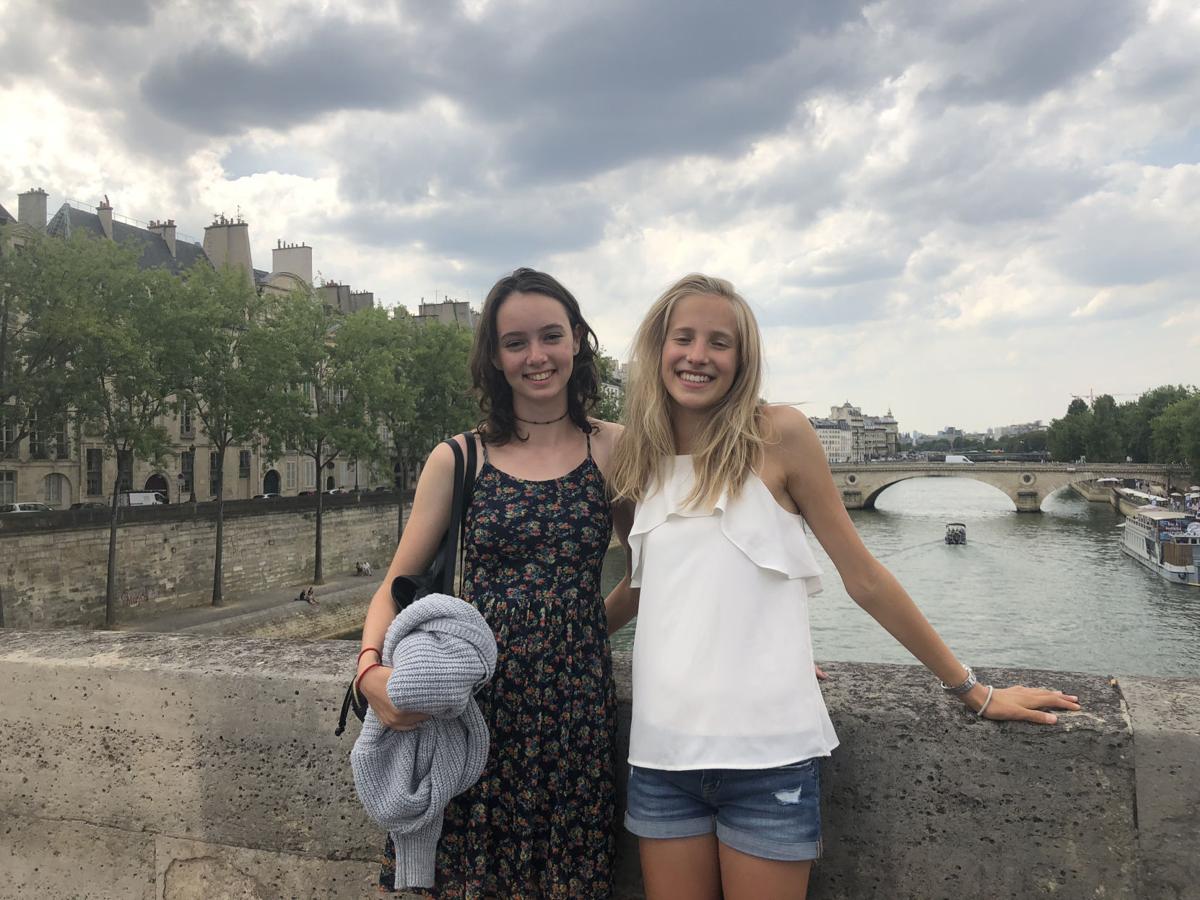 Amelia Opsahl, right, is shown here in Paris with Annie Clark, a student from Texas, during the five weeks Opsahl spent in France in summer 2018. Behind them is the Seine river.

Amelia Opsahl visited France for five weeks in summer 2018. Here, she’s shown with the Palace of Versailles in the background.

Amelia Opsahl takes in Impressionist painter Claude Monet's famed gardens in Giverny, France, during the five weeks she spent in the country in summer 2018.

Amelia Opsahl, right, is shown here in Paris with Annie Clark, a student from Texas, during the five weeks Opsahl spent in France in summer 2018. Behind them is the Seine river.

In fact, the Keene High School junior is being celebrated for her language proficiency after earning the highest score in the country at the most difficult level of a national French exam.

Opsahl won the Platinum Award in Le Grand Concours, the 2020 National French Contest, which the American Association of Teachers of French sponsors annually. She did better than the nearly 4,000 other students who took the Level 5 test. A total of 68,790 high school students competed nationwide in levels 1-5.

“I was really just happy to do the test because I love doing anything French-related,” Opsahl said Tuesday. “But it was nice to get a high score on it.”

She took the exam in mid-March and got the results in May.

Opsahl, who lives in Chesterfield and Keene, began studying French in kindergarten at The Grammar School in Putney, Vt., where she stayed through 7th grade. She continued studying the language when she transferred to Stoneleigh-Burnham School in Greenfield, Mass., for 8th grade and took the highest-level French courses Keene High School offers during her freshman year.

“Ever since then, I’ve just been kind of searching desperately for other opportunities to take French, to learn more French,” she said.

“She’s like the engine of the class,” said Marylise Reilly, a Keene High French teacher who taught Opsahl her freshman year and has worked with her since. “She is the one who sets the tone of the whole class because she has a very high level of the way she functions, the way she thinks, what she expects of herself. She’s very motivated.

Opsahl, who also takes Spanish classes, plans to continue studying foreign languages in college, and wants to study abroad in both French- and Spanish-speaking countries. After college, she hopes to find a job where she can apply her language skills.

“Having this knowledge in foreign language is helpful, but I don’t think I want to be a translator or do something with teaching or linguistics or anything like that,” she said. “But I think having a knowledge of different languages is really advantageous in business, and that’s also something that I’m interested in.”

She could also see herself working in foreign affairs or for an international non-governmental organization, she added.

For now, Opsahl enjoys studying French because it helps her connect with different cultures. She traveled to France in the summer of 2018, after her freshman year at Keene High, for a five-week program, which included a month-long stay with a host family in Rennes in the northwest part of the country. She still stays in touch with her host family, and with Anna, a French high school student whom she hosted as part of an exchange program last October.

“I think learning foreign languages is something we don’t really emphasize in America, but it’s so important because … learning someone else’s language kind of goes with learning someone else’s culture, as well,” Opsahl said. “Just by learning the language, you’re reading the newspapers, you’re hearing the radio, and it gives you this insight into a whole other world.”

Keene High School offers the National French Contest most years, Reilly said. The exam, which consists of a mix of grammar, reading and listening comprehension questions, is voluntary for students and does not factor into their grades. This year, Keene High students got the best results on the test Reilly has seen in her nine years at the school, she said.