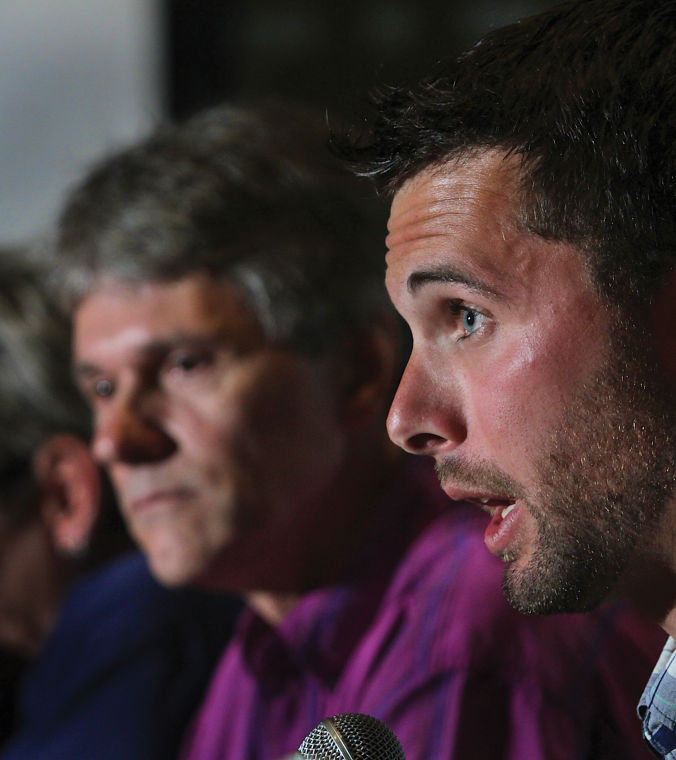 Panelist Trevor Burke, a former heroin addict, speaks to the audience as Ron Smith, who lost a son to a heroin overdose, listens at a community drug forum in the Keene High School auditorium Tuesday night. 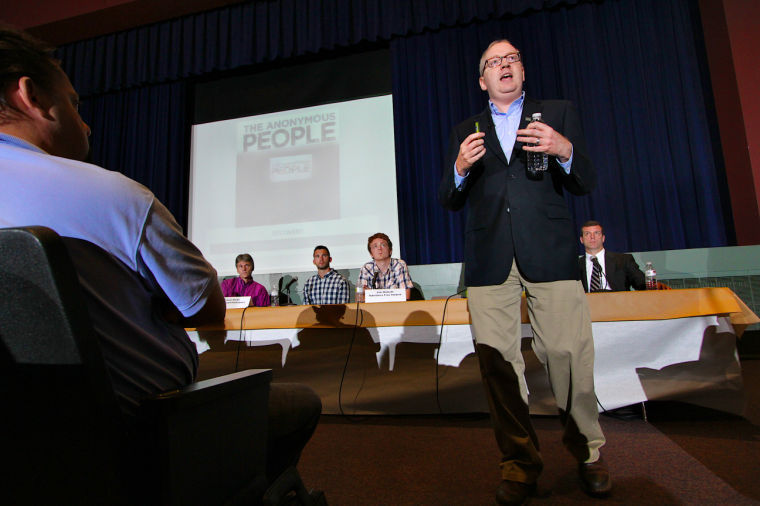 Tym Rourke, the director of Substance Use Grant Making at the N.H. Charitable Foundation, included a slide presentation in his address to the nearly 150 attendees at a community drug forum in the Keene High School auditorium Tuesday night.

Panelist Trevor Burke, a former heroin addict, speaks to the audience as Ron Smith, who lost a son to a heroin overdose, listens at a community drug forum in the Keene High School auditorium Tuesday night.

Tym Rourke, the director of Substance Use Grant Making at the N.H. Charitable Foundation, included a slide presentation in his address to the nearly 150 attendees at a community drug forum in the Keene High School auditorium Tuesday night.

As local and state death tolls from substance abuse continue to increase, the message at a community drug forum in the Keene High School auditorium on Tuesday night was loud and clear: More treatment and prevention is needed to stem the rising tide of addiction to heroin and prescription pills.

Over the course of the night, local law enforcement and health officials presented startling and grim statistics. But no one could put a face to the problem like a mother who had lost her child to drugs.

Roberta A. Lacy spoke at the forum about the recent passing of her daughter, due to a heroin overdose. Roberta is the mother of Shannon E. Lacy, a Keene High School French teacher who died over the summer.

“Drugs do not discriminate,” Roberta Lacy told the assembled crowd. “You can be educated or not educated, it doesn’t matter, but it is a huge epidemic in New Hampshire.”

Through tears, Lacy told the audience that her daughter, a young and well-liked teacher, had first become addicted to Percocet before turning to a cheaper drug: heroin.

“She graduated from Keene State with honors,” Lacy said. “She was so terrified of losing her job here, and she hid it very well from me. Only just recently, she agreed she had a problem.”

For many months, her daughter had struggled with her addiction alone, afraid to seek help, Lacy said. Shannon Lacy nearly passed away in March from an overdose, and in the summer, she died just nine days after her 26th birthday.

Like Shannon Lacy, many of the people who become addicted to heroin start out on prescription pills, according to Commander Scott Sweet, part of the N.H. Attorney General’s Drug Task Force.

There are several reasons the appetite for drugs in New Hampshire has shifted away from prescription pills to heroin, Sweet said. One is that pharmaceutical companies changed the coating of prescription pills around 2010, making them much harder to crush up and snort and inject.

The second reason is cost, he said.

“It really boils down to an economic decision,” Sweet said. “The people who are abusing are trying to make their money go a little further.”

The effects of that have been devastating, he added.

In Keene, the statistics are just as troubling. In 2013, there were nine fatal drug overdoses reported in the city, according to Police Chief Kenneth J. Meola. Of those, six were from heroin.

So far in 2014, police have seen five fatal drug overdoses, and many more near overdoses, Meola added.

He said Keene firefighters and EMTs have administered the drug Narcan 82 times in the past year, often to the same people who have overdosed multiple times. Narcan reverses drug overdoses.

Keene health officials and school members agreed, saying they are especially focused on substance use prevention efforts, reaching out to parents and kids at the middle and high school levels.

Whitehead said the numerous challenges and pressures that come with being an adolescent can contribute to teen substance use.

She encouraged parents to take an active role in their children’s lives when it comes to discussing substance use, setting expectations and making sure parents and kids are open with each other.

Community treatment providers including representatives from Phoenix House, Keene Metro Treatment Center and the Cheshire Country Drug Court were also on hand to talk about the treatment options available in the community.

Amelie Gooding, the director of Phoenix House in Keene, said her rehab program treats many young adults ranging in age from 18 to 28. Many are addicted to heroin, and often are showing signs of other mental health issues, she said.

With the introduction of the Affordable Care Act and Medicaid expansion including a substance abuse benefit, Gooding said her organization can help many more people than it previously has. But she also said the number of those who need treatment is much larger than the number of providers in New Hampshire.

“There’s not a lot of it, but there’s a lot of people who care and will try to get you the help you need,” she said.

The forum concluded with a final presentation from Tym Rourke, the director of Substance Use Grant Making at the N.H. Charitable Foundation. Rourke, who also chairs the N.H. Governor’s Commission on Alcohol and Drug Abuse Prevention, Intervention and Treatment had one main message: Be active to combat the problem.

Rourke told audience members they should be panicking with such a serious problem.

“This is quietly killing residents ... and we’ve got to stop it,” Rourke said.

Rourke encouraged audience members to call their legislators and ask them to prioritize treatment and prevention funding in the upcoming annual state budget process.

“Please go out and tell three people to panic,” Rourke said. “Call your legislators and tell them they need to panic. It’s very, very important that your crisis not stay local ... this should be the dominant crisis that is discussed in our Concord Legislature next fall.”