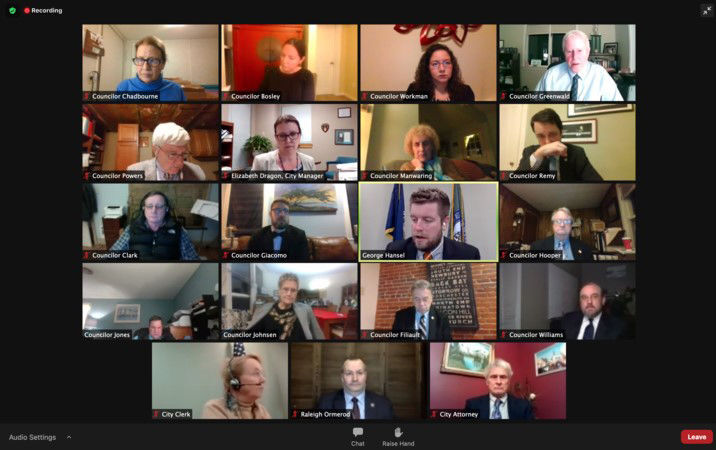 The Keene City Council and members of city staff are shown in this screengrab from Thursday’s meeting, during which councilors voted to take portions of land from three Winchester Street parcels by eminent domain. 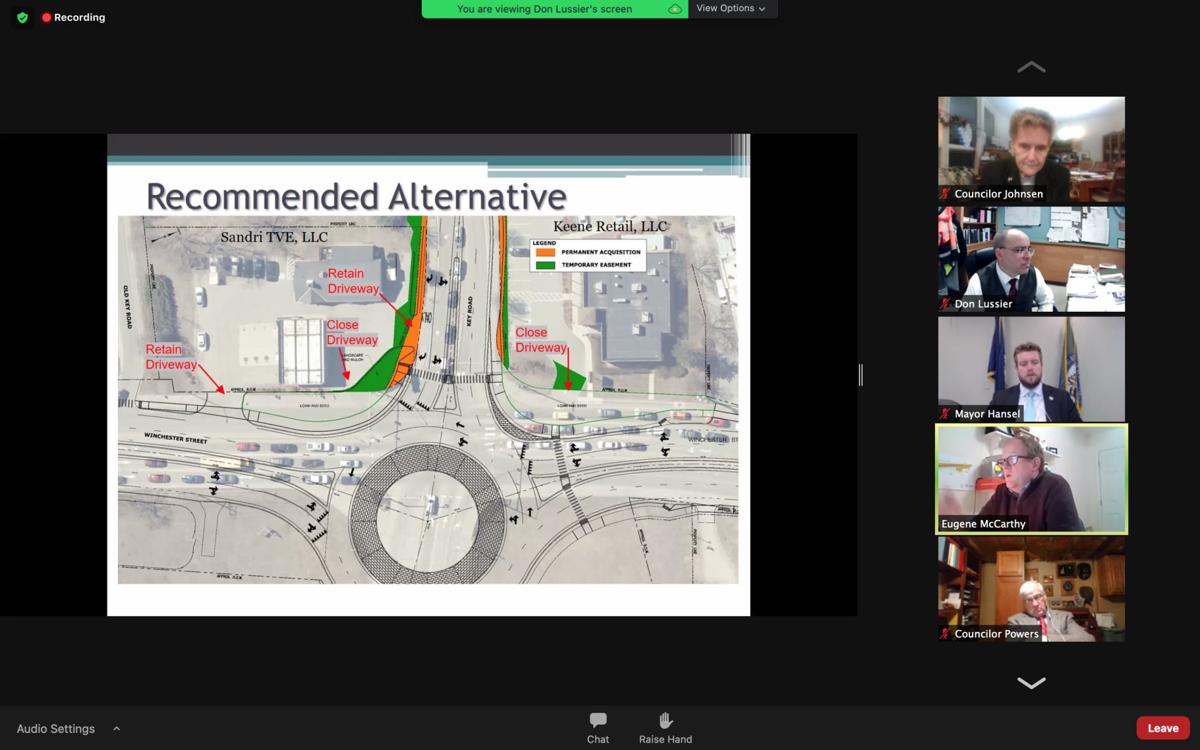 This rendering from a videoconferenced Keene City Council meeting in December shows how the roundabout planned for the intersection of Winchester Street and Key Road would affect driveways at nearby businesses.

The Keene City Council and members of city staff are shown in this screengrab from Thursday’s meeting, during which councilors voted to take portions of land from three Winchester Street parcels by eminent domain.

This rendering from a videoconferenced Keene City Council meeting in December shows how the roundabout planned for the intersection of Winchester Street and Key Road would affect driveways at nearby businesses.

Despite threats of legal action from one of the property owners, the Keene City Council has voted to take portions of land from three Winchester Street parcels by eminent domain to move ahead with a reconstruction project at the street’s intersection with Key Road.

The city intends to replace the existing four-way intersection with a roundabout, which officials expect will alleviate traffic congestion. This is part of a larger project that will also include adding a roundabout at the intersection of Winchester, Island and Pearl streets as well as replacing the Island Street bridge.

During Thursday’s meeting, the council voted unanimously to take small pieces of three parcels on either side of the western part of the intersection. The two parcels at 345 Winchester St. are owned by Sandri Companies, which operates a convenience store and Sunoco gas station at the site. The other parcel, 333 Winchester St., is owned by Keene Retail, Inc. and currently home to Chipotle.

Attorney Michael Hanley, who represents Sandri, has said previously that if the city moves forward with eminent domain proceedings, the company would have no choice but to take the matter to court.

“The city has not been able to negotiate a resolution for us to take over ownership,” said Councilor Thomas Powers, who chairs the council’s Finance, Organization and Personnel Committee, which was tasked with reviewing the eminent domain proposal. “Therefore, we have had to initiate this condemnation process to get ownership of the land.”

Eminent domain, also known as condemnation, is the process by which a government can take private property by force if it will be put to public use and as long as the landowner receives just compensation.

The council voted unanimously Thursday to move forward with eminent domain proceedings, with the exception of Councilors Bettina Chadbourne, Gladys Johnsen, Raleigh Ormerod and Robert Williams, who did not vote as they did not attend a site visit related to this project.

The council’s vote comes just over two weeks after the FOP Committee voted unanimously Dec. 22 to recommend that the council move forward with the eminent domain process.

Attorneys representing the owners of the properties have stated they feel the compensation being offered by the city was far from adequate.

Hanley said during a Dec. 17 public hearing that the city made at least two “absurdly low” offers of $600 in one case and about $14,800 in the other. He called this “an abuse of power” and argued that Sandri should be compensated not only for the loss of land, but also for the loss of business the company expects to result from the removal of one of its driveways.

“The loss of the curb cut by Keene Retail on Winchester Street would substantially impact the business,” said Steve Clark, attorney for Keene Retail, during the Dec. 17 hearing. “And the compensation that has been offered was extremely low.”

In addition, Michael Behn, president of Sandri Companies, said he feels the roundabout project fails to address the root of the traffic congestion problem. Also speaking at the Dec. 17 hearing, Behn said the issue stems from the limited access points to both Key Road and the Riverside Plaza.

He suggested looking at options for creating new access points and said that would limit the traffic congestion at the intersection.

However, according to Gene McCarthy, of McFarland Johnson — a Binghamton, N.Y., design firm that has been working on this project — the notion of adding additional access points was looked at during the planning process, but the N.H. Department of Transportation was not in favor of the idea.

“This was sort of an ‘absolutely no,’ the DOT will not entertain that idea,” McCarthy said.

The $4.27 million project will be financed via an 80/20-percent split between the N.H. Department of Transportation and the city. The project also requires gaining access to several other properties along Winchester Street, but these are the only two the city has been unable to strike an agreement on.