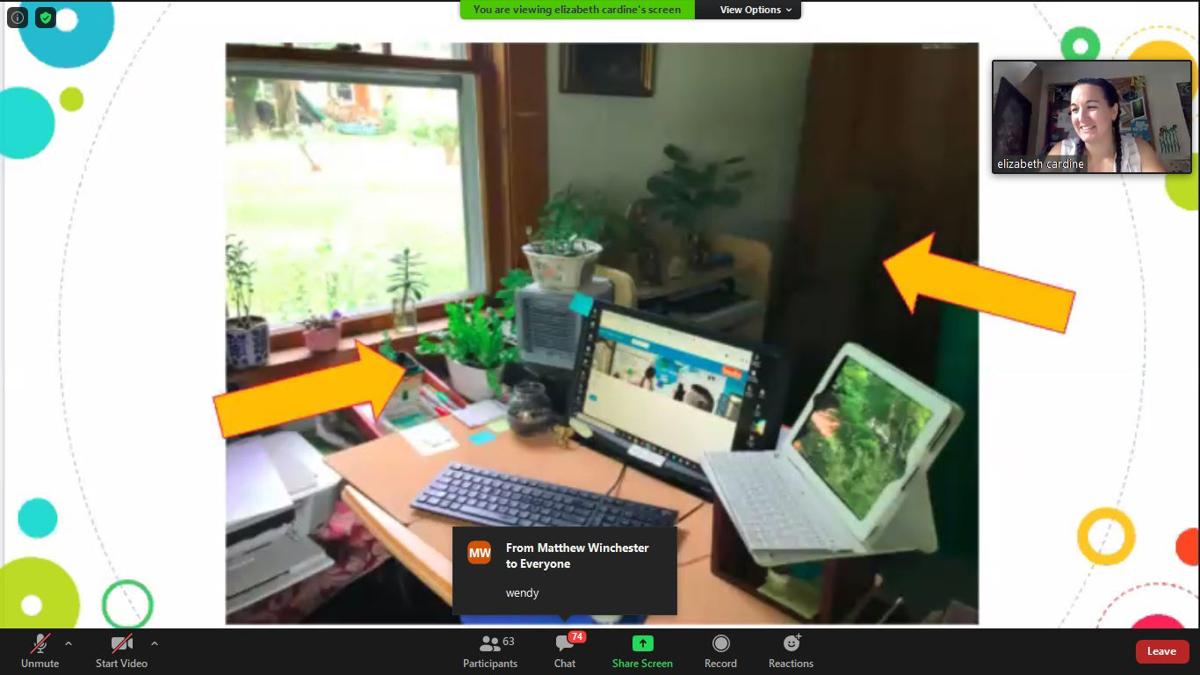 Lead teacher Elizabeth Cardine leads a “community-builder” activity during Monday morning’s videoconferenced school-wide meeting to kick off the first day of school for Making Community Connections Charter School in Keene. Students were shown a picture of staff members’ home work spaces, and had to guess whose work they were seeing. 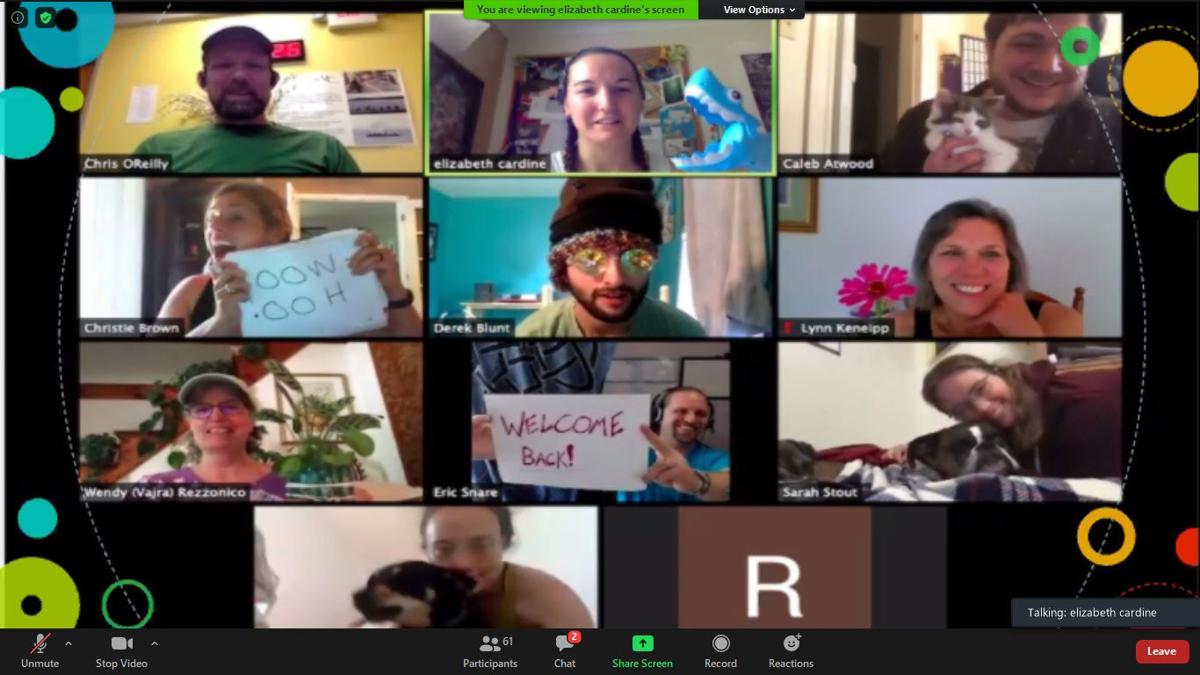 The staff of Making Community Connections Charter School join remotely for a Zoom call this summer.

Lead teacher Elizabeth Cardine leads a “community-builder” activity during Monday morning’s videoconferenced school-wide meeting to kick off the first day of school for Making Community Connections Charter School in Keene. Students were shown a picture of staff members’ home work spaces, and had to guess whose work they were seeing.

The staff of Making Community Connections Charter School join remotely for a Zoom call this summer.

In many ways, Monday was a typical first day of school for Making Community Connections Charter School in Keene.

The day began with a morning assembly, which was abuzz with friendly chatter, laughter and reunions after seven weeks of summer vacation. After some initial announcements, students and staff recited the Pledge of Allegiance. Elizabeth Cardine, the school’s lead teacher, encouraged the community to make the handful of new students feel welcome.

But one big thing made Monday different from any previous first day at the school, which is also known as MC2 (pronounced “em-cee-squared,” like Einstein’s energy-mass formula). Students and staff gathered via Zoom and began the new school year remotely, the way MC2 will operate for the foreseeable future.

“I missed the learners so much, and it was so great to see them all today, even if it was on the computer screen,” School Leader Chris O’Reilly said in a phone interview Monday morning. He added that MC2’s staff and students shared a genuine excitement to return to school, even remotely, at a time when other public schools throughout the state are still working to develop their reopening plans.

“They just love the community,” O’Reilly said of MC2’s students. “And it’s a shame that we have to be apart from them right now, but we know this won’t be forever.”

MC2, which began as part of the Monadnock Regional School District in the early 2000s and established a separate Manchester campus in 2012, typically operates on a year-round schedule. So school leaders from both Manchester and the Keene campus, which opened in 2015, met with state board of education officials in May to discuss options for MC2’s return to school on July 27 and ultimately chose to begin the year remotely, O’Reilly said.

MC2’s Keene campus, in the Center at Colony Mill (formerly known as the Center at Keene) has 65 high school students and 10 staff members. Like all other public schools, MC2 transitioned to remote learning in the spring and remained that way through the end of last school year on June 5. The summer break allowed staff to reflect on the switch to remote learning and how to improve it moving forward, O’Reilly said.

“What we learned — I think what a lot of others learned — is how remote learning works, how to interact with one another in an online format, how to really use and leverage technology for its intended purpose,” O’Reilly said. “So I think staff and students got a real education on the utility of the Internet and everything that you can actually do with it.”

MC2 staff and students also discovered that they should make remote learning schedules more flexible, which is exactly what they did for the new academic year. Cardine, the lead teacher, encouraged students, all of whom have an individualized learning plan, to talk with their advisers about turning extracurricular activities and even part-time jobs into class credit. And, she added, school staff are willing to work with all students to provide the education that best suits their needs.

MC2 students graduate on a rolling basis, and earlier this year during the pandemic, school officials hosted individual outdoor ceremonies for each graduate.

MC2 has convened a school-reopening committee to explore the possibility of returning to in-person classes this trimester, which runs through late October. Even if that doesn’t happen, though, O’Reilly said the school’s Keene campus will look at options for gathering in small groups for outdoor activities or other socially distanced educational opportunities.

“So we’re already thinking about ways in which we can come together safely,” he said.