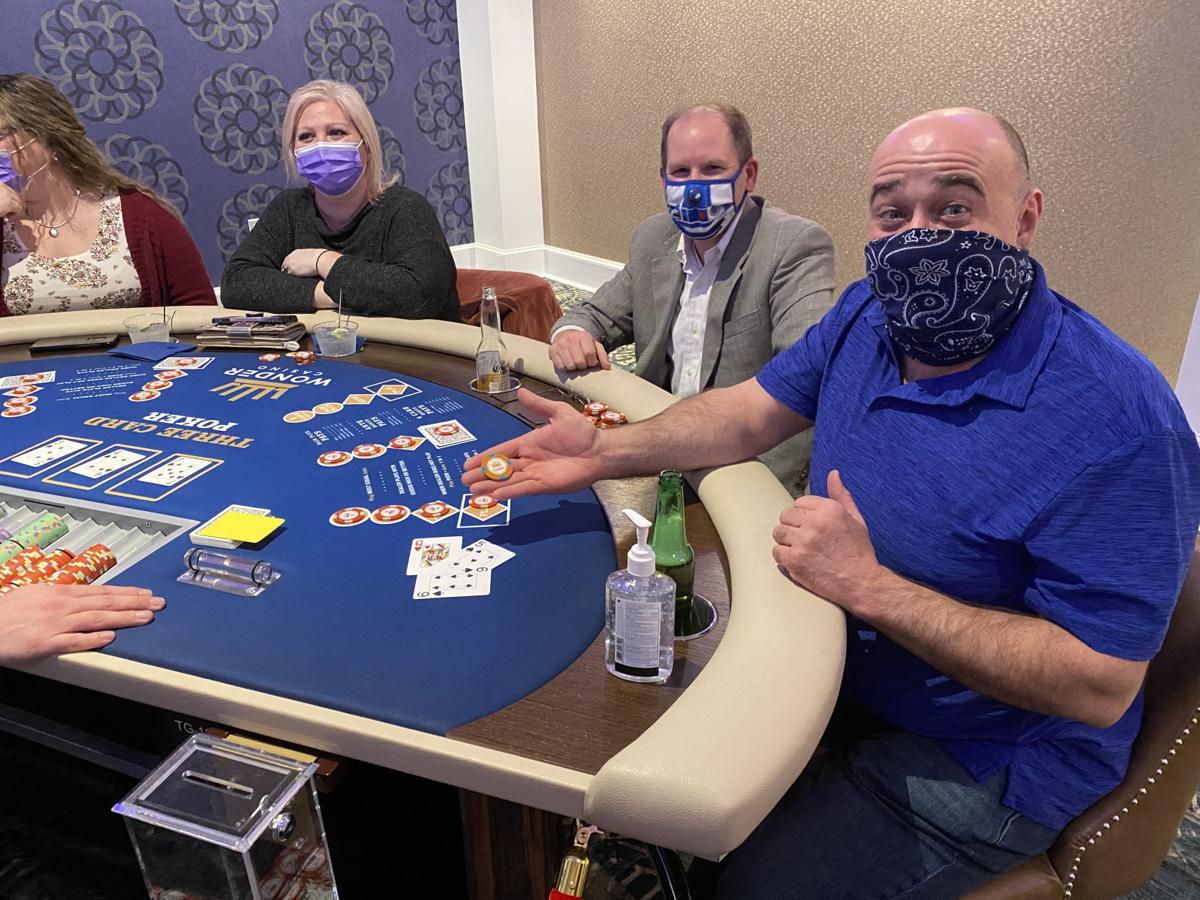 Jonathan Evans of Keene reacts after winning $1,000 on a $5 bet, which he did twice on opening night Wednesday at Wonder Casino in Keene. Its grand opening is scheduled for Friday at noon, with a 40-seat poker tournament scheduled for Sunday. 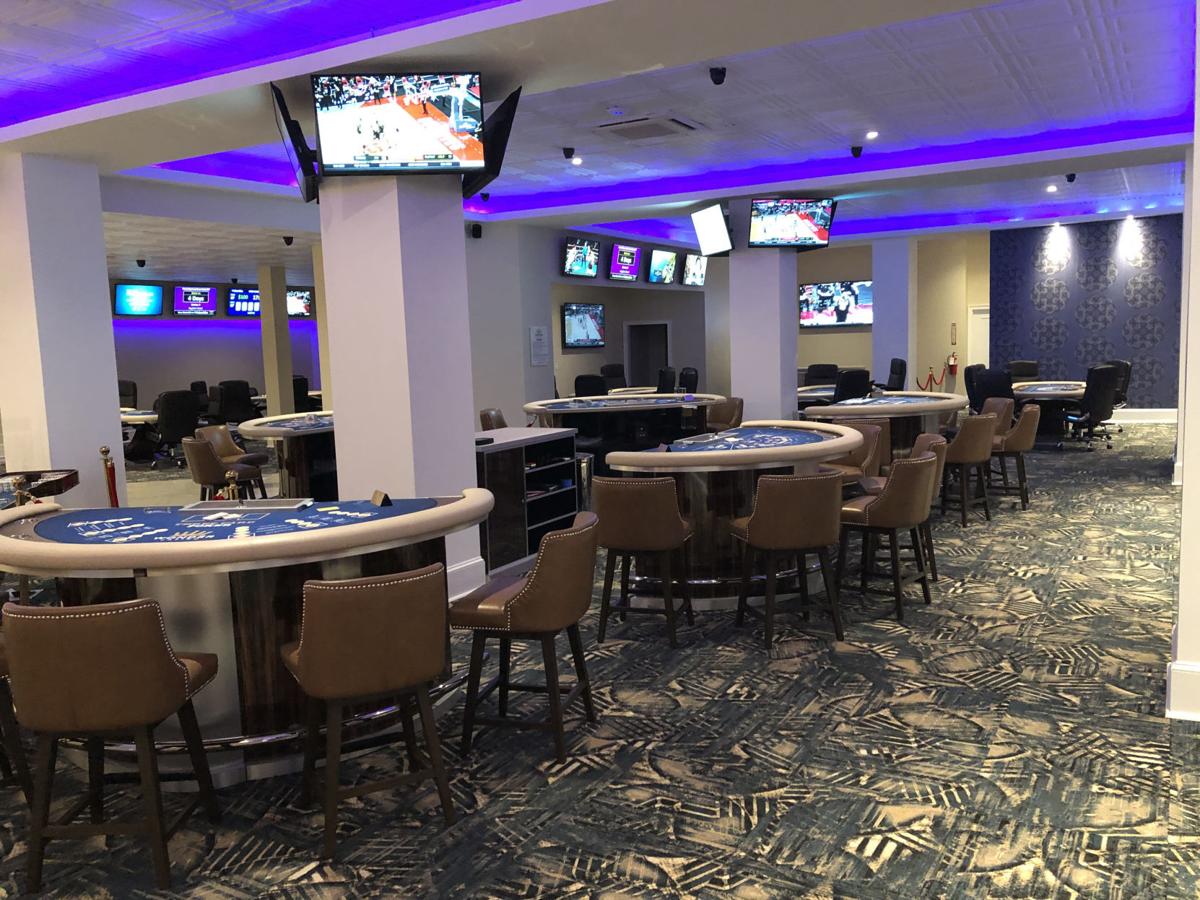 Offerings at the new Wonder Casino in Keene include blackjack,roulette, three-card poker, N.H. Hold ‘em and Let It Ride.

Jonathan Evans of Keene reacts after winning $1,000 on a $5 bet, which he did twice on opening night Wednesday at Wonder Casino in Keene. Its grand opening is scheduled for Friday at noon, with a 40-seat poker tournament scheduled for Sunday.

Offerings at the new Wonder Casino in Keene include blackjack,roulette, three-card poker, N.H. Hold ‘em and Let It Ride.

Only hours after Wonder Casino opened Wednesday in downtown Keene, Jonathan Evans of Keene hit a straight flush in three-card poker to win $1,000 on a $5 bet.

Less than half an hour later, Evans did it again — despite not being too familiar with the game.

Evans’ payouts helped inaugurate the 172 Emerald St. facility that co-owners Jared Goodell and Thomas Leech have been planning since late 2019. Its grand opening will be Friday at noon, with a 40-seat poker tournament scheduled for Sunday.

Wonder Casino is the Elm City’s second gambling establishment currently in business, with Keene Casino — then called Keene Poker Room — having moved to the Colony Mill complex on West Street in 2016, according to past reporting by The Sentinel.

But Goodell said Thursday that even before the COVID-19 pandemic, he often heard Keene residents lament what they perceived as a lack of local entertainment options. The new casino, he believes, will help solve that problem while also creating jobs and raising money for Monadnock Region charities, which is required of Granite State gambling venues.

The Emerald Street location is a familiar one for Goodell, who ran a discount furniture store in that space from October 2019 until its closure just two months later, according to past reporting by The Sentinel. He also owns Keene CBD and the adult-entertainment store Vybrant in adjacent storefronts — all of which are housed in the same building.

Renovations for the casino included installing new wallpaper, carpeting, televisions and 12 gambling tables, according to Goodell. Its offerings include blackjack, roulette, three-card poker, N.H. Hold ‘em and Let It Ride.

“We really focused a lot on the lipstick, if you will, and making the place feel like a Vegas casino,” he said. “… People want to feel like when they walk in, that they’re not in Keene anymore.”

Most of the preparations, which Goodell said moved slowly during the pandemic, involved dealing with the N.H. Racing and Charitable Gaming Commission.

Under RSA 287-D, the state has strict licensing guidelines for any business offering games of chance — including the charitable-giving requirement. The law dictates that casinos must give 35 percent of their total revenues, minus any prize money that is awarded, to charity.

Goodell expressed confidence that Wonder Casino will generate $250,000 annually for charitable organizations, estimating the business will raise approximately $100,000 each month, before subtracting prize money. Those donations will be crucial for local charities, he said, because many have struggled to fundraise during the pandemic.

“We had so many charities that were excited that this [funding] was available,” he said. “… In this situation, they don’t have to do any heavy lifting, and there’s zero risk.”

The casino has already identified a number of local organizations to receive donations, including Feeding Tiny Tummies in Keene, which combats food insecurity among children in Cheshire and Sullivan counties; the Winchester Centennial Lions Club; the Keene SwampBats baseball program; and Cathedral of the Pines in Rindge.

Wonder Casino will also benefit the local economy by creating new, well-paying jobs, according to Goodell.

The casino currently employs 27 people — a majority of whom live locally and will work as card dealers, he explained. That group also includes young transplants from Massachusetts and Connecticut, which Goodell said will help address concerns around New Hampshire’s aging population. (One in three Granite Staters will be over 65 by 2030, according to the N.H. Department of Health and Human Services.)

“I think that as we grow, that will only create more jobs,” he said.

“It’s really nice to see a new business investing in Keene and creating new jobs,” Hansel told The Sentinel in a text message Friday. “... I’m sure those [charitable] contributions will be welcome as many organizations are struggling with pandemic-related challenges and shortfalls.

The casino has implemented a number of COVID-related protocols, including requiring adherence to the citywide mask mandate, providing hand sanitizer and limiting seats at each gambling table, according to Goodell. The poker tables that normally seat 10 people will allow only six, he said.

Goodell said he hopes the casino’s grand opening this weekend — which includes a Deep Stack 250 Hold ‘em tournament with a $250 buy-in Sunday afternoon, according to a post on the casino’s Facebook page — will be as successful as opening night Wednesday.

“It was really nice to be able to socialize again,” he said.

This story has been changed to clarify that Jared Goodell co-owns Wonder Casino with Thomas Leech.