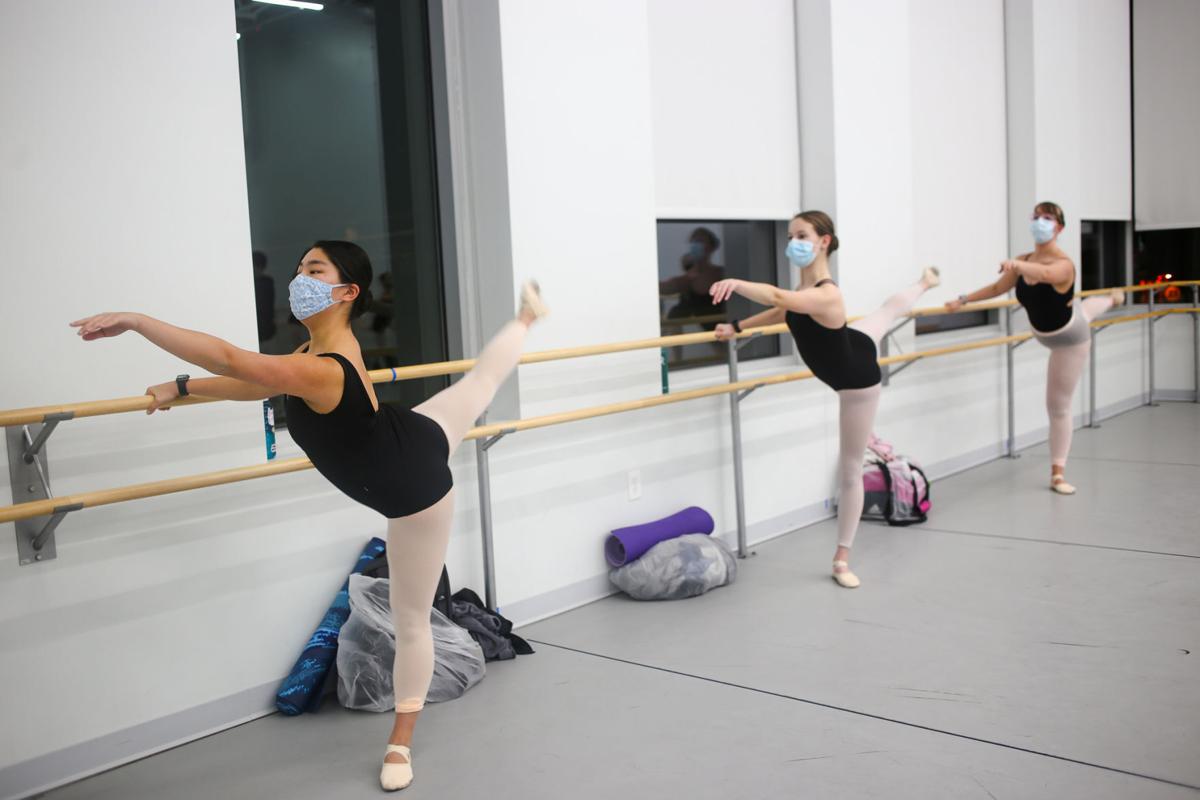 Students at MoCo Arts participate in a masked and socially

distanced dance class. Though in-person classes have resumed, the nonprofit is still streaming performances rather than hosting an audience.

Students at MoCo Arts participate in a masked and socially

distanced dance class. Though in-person classes have resumed, the nonprofit is still streaming performances rather than hosting an audience.

If you were to peek into the classrooms and studios at MoCo Arts, a nonprofit arts education organization in Keene, things would almost look normal, or at least like the new normal. Students have returned for in-person classes in dance and theater. They wear masks while they rehearse, and stay within socially distanced squares that have been mapped out on the floor with tape.

“Actually, we have to re-tape again here,” Reagan Messer, executive director and artistic director of dance at MoCo, remembers while describing the set-up.

But one thing still hasn’t returned since the pandemic: live performances. At MoCo, performances are an important learning experience and also a way to generate revenue, Messer said.

“The performance for us is part of the education process for the kids, and the moment when parents get to see their work,” he said. “We wanted to continue that education process, but we had to change the way we did it.”

With social distancing, only about eight audience members would be allowed into MoCo’s black box theater. Even if they utilized theater space at nearby Keene State College, the crowd would be much smaller.

Instead of returning to live performances, Messer borrowed an idea from professional dance and theater troupes, which began releasing videos of old productions during the pandemic as a way to keep some revenue coming in. MoCo would film productions, making them available for streaming or download to family members and anyone else who was interested.

“It was a whole different ball game for us,” Messer said.

The leadership at MoCo decided to charge for the films, in order to cover the cost of production and to hopefully make up for revenue lost from in-person performances. The films were priced at twice the normal ticket price, with leadership figuring that for a family of four, this still represented a bargain. The approach was a success. For one show, 72 people paid $40 to stream the performance.

“We did pretty well,” Messer said. “For guessing at a budget that we’ve never experienced before, we hit the budget for all our shows.”

There was a small loss compared to in-person performances. Normally, some community members without ties to the performers would come to the shows, but those people were less likely to stream or download.

Even with performances being streamed, students are masked during performances, unless they are performing a solo. During a show students move around on stage, but maintain a 6-foot distance between them.

“The safety of students and staff has been at the forefront,” Messer said.

Messer estimates that enrollment at MoCo is down 30-35 percent compared to a typical year. Between March 2020 and February 2021, MoCo sustained a loss of $325,000, Messer said, with another $50,000 loss predicted through the summer. Two rounds of Paycheck Protection Program (PPP) funding and a grant from the state have provided $321,000, but the staff at MoCo has had to adjust their budgets.

“The staff has been on top of where we can cut corners without impacting the students and the programming,” Messer said. “It’s been a balancing act.”

MoCo’s balance sheet “might not look too pretty,” at the moment, he said, but the organization’s cash flow has let them maintain staffing. Still, Messer worries about what will happen when government support disappears.

“Like every other organization, right now we’ve been able to survive because of the PPP and other stimuluses, but that’s going to go away. The question is will that go away before we’re back to normal,” Messer said. “That’s the question for all businesses, but especially the arts, because the arts have been destroyed by this.”

Messer has learned not to plan too far ahead, so that his organization can respond nimbly to changes that arise from the pandemic. Right now they have a plan in place for in-person summer camps, with limited enrollment.

Throughout the adjustments, Messer and his staff have remained focused on their mission: transforming lives through movement and creative expression.

“It’s short, it’s sweet; everyone who works here can say it,” Messer said. “Everything we do at MoCo is mission-based. If you stay true to your mission and you don’t get mission creep, you usually find success.”

This story is part of the 50 Businesses, 50 Solutions series, shared by partners in The Granite State News Collaborative, that aims to highlight how business leaders across the state, from mom and pop shops to large corporations, have adapted to meet the challenges and disruptions caused by the novel coronavirus in the hopes others may be able to replicate these ideas and innovations. For more information, visit collaborativenh.org.