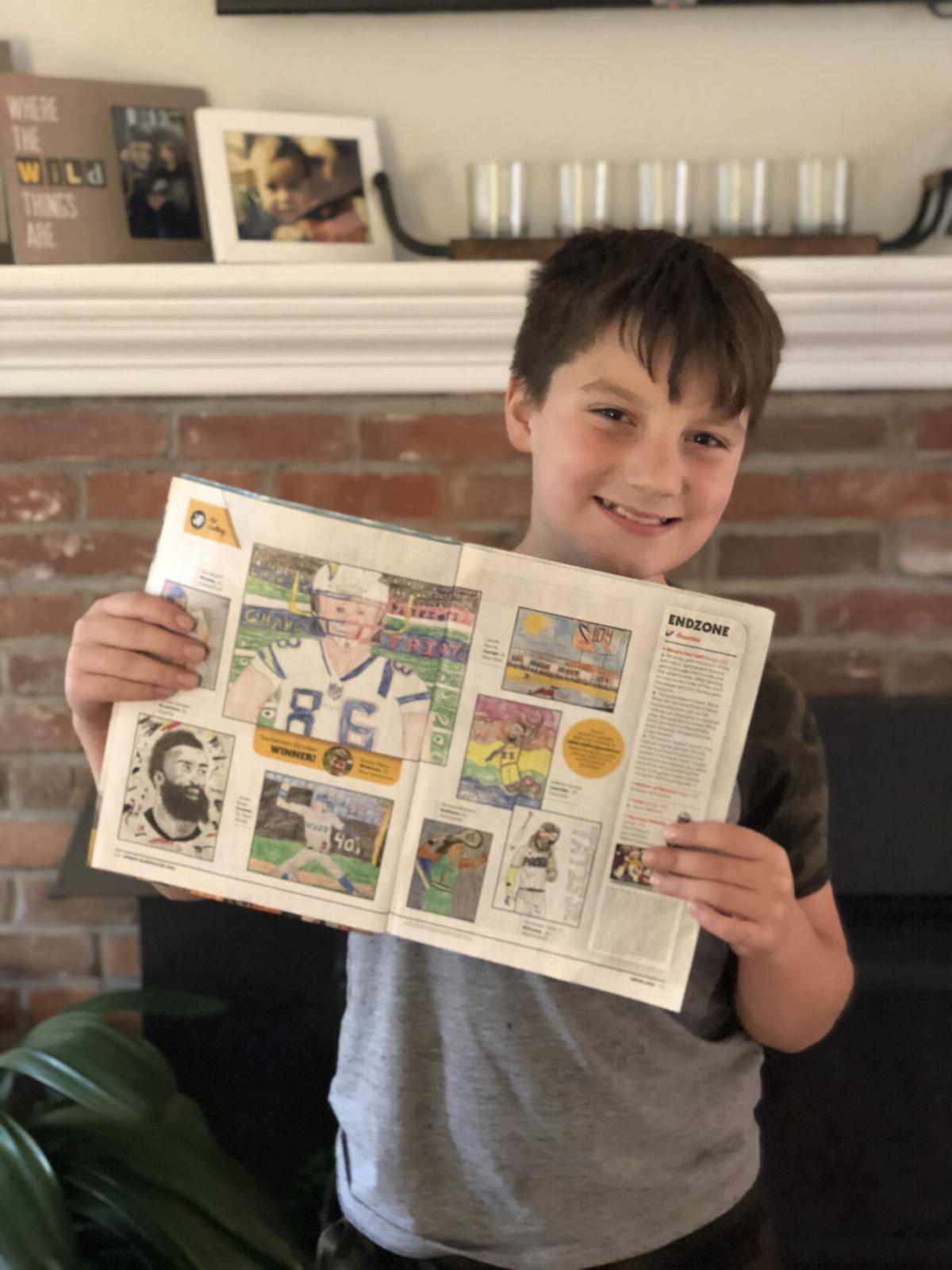 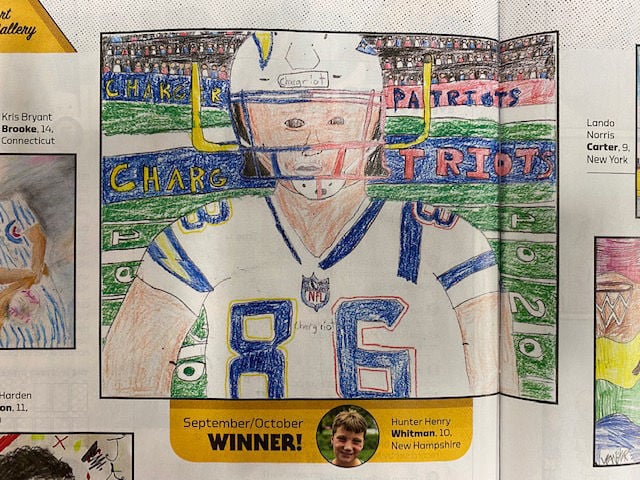 Whitman Conboy was in the middle of a Nerf gun war several months ago when he found out his artwork would be featured in a national publication.

In the September/October issue of Sports Illustrated Kids, the Keene 10-year-old’s drawing of the New England Patriots tight end Hunter Henry was highlighted as the winner of the magazine’s Art Gallery contest.

“I had been thinking about [entering the contest] for a little while, and I had realized that, ‘Hey I know how to draw a football helmet, maybe I can make a person’,” Whitman said in an interview Tuesday.

Shortly thereafter, Whitman, who also goes by Whit, learned from his dad, JJ, that Henry had joined the Patriots from the Los Angeles Chargers. The young artist felt inspired to draw the new addition to the team in part because Whitman particularly likes receivers. (But Henry isn’t Whitman’s favorite football player — that title is reserved for Baltimore Ravens quarterback Lamar Jackson, he said.)

Conboy is a big fan of Sports Illustrated Kids, he said, and when a new issue arrives every other month, he always enjoys flipping through the art gallery — a collection of reader-submitted renderings of sports figures and scenes. The magazine has been in print for more than 30 years, according to its website. The publication had a circulation of about 300,000 nationwide at the end of last year, according to BPA Worldwide, a publication-auditing nonprofit.

The Art Gallery contest is included in every issue of Sports Illustrated Kids, according to Drew Dzwonkowski, the magazine’s art director. Each issue garners hundreds of submissions from readers between the ages of 5 and 15, he told The Sentinel in an email Tuesday. Of those, eight or nine will be included in the art gallery, and only one gets to claim with winning title, Dzwonkowski said.

The winning picture typically excels in a few areas: likeness to an athlete, a well-developed scene, and some sort of creative twist, Dzwonkowski said.

“Whitman’s drawing not only had a background, but it had a middleground as well, which added even more depth,” Dzwonkowski said. “He meticulously added individual spectators and field details — those kinds of things keep your eye bouncing all over a drawing.”

Whitman’s winning art piece is a mixed-media portrait of Henry standing on the field in front of a carefully drawn crowd. In crayon and colored pencil, Whitman’s illustration depicts two different chapters of Henry’s career — the athlete’s right side represents his time with the Chargers, and his left side dons the red, white and blue of the Patriots, the franchise Henry joined in the spring.

It was this creativity that made Whitman’s piece stand out, Dzwonkowski said.

“Drawings should be more than a re-creation of a photograph, and here’s another area where Whitman nudged ahead of the competition,” Dzwonkowski said. “He drew tight end Hunter Henry, but he’s split down the middle, showing the player in two different realities — one as a Charger, and one as a Patriot. His jersey makes you do a double-take: ‘Chargriot?’ Only when you give the drawing a second look do you see the fun mischief Whitman is up to.”

The 5th-grader at Symonds Elementary School said it probably took about six or seven hours to complete the drawing.

The feature lies at the intersection of Whitman’s passions — drawing and football. He said he enjoys drawing all kinds of things, and while he won’t be playing tackle football until he starts middle school next year, the sport holds a special place in his heart.

Conboy’s mother, Adrienne, said that when she received an email from Sports Illustrated a few months ago, she almost didn’t open the message, thinking it was just a generic email from the publication.

Conboy initially considered not telling her son he had won so it would be a surprise when the issue arrived in print but in the end was too excited to keep it to herself. She ran into the next room where Whitman was playing with his brother Brody and two friends.

“It was really cool to have my friends over when I got the news,” Whitman said. “They were so surprised.”

He said the school library had received the September/October issue before he did, and his mom, who at the time worked at Symonds in the ARC program, ran into his morning meeting with the magazine in hand to show the rest of his class.

Whitman said he doesn’t have any plans to submit more work to future Art Gallery contests, but that’s not to say he hasn’t been busy exercising his creative abilities.

“I love to draw, like, anything,” Conboy said. “I have a bunch of my drawings around the house.”

And that’s a good thing, according to Dzwonkowski.

“I’m excited for the day when I reach out to work with a professional illustrator and discover they were featured in our Art Gallery as a kid,” Dzwonkowski said. “If Whitman keeps drawing, it could be him.”