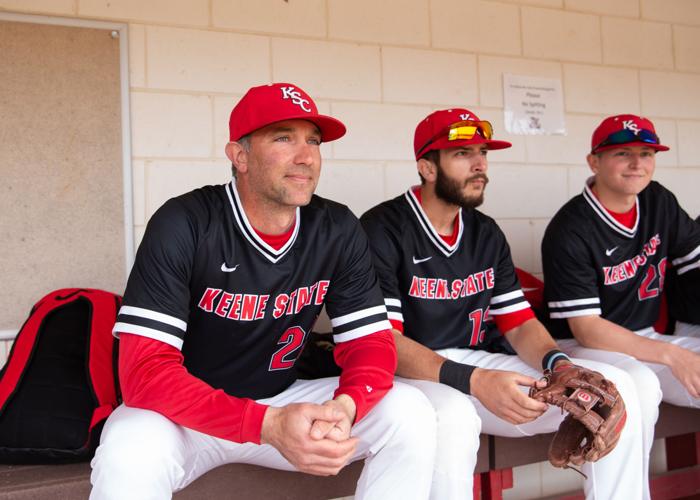 Justin Blood, Keene State College's head baseball coach, sits on the bench with his team at the Owl Athletic Complex before their game against Roger Williams Thursday. 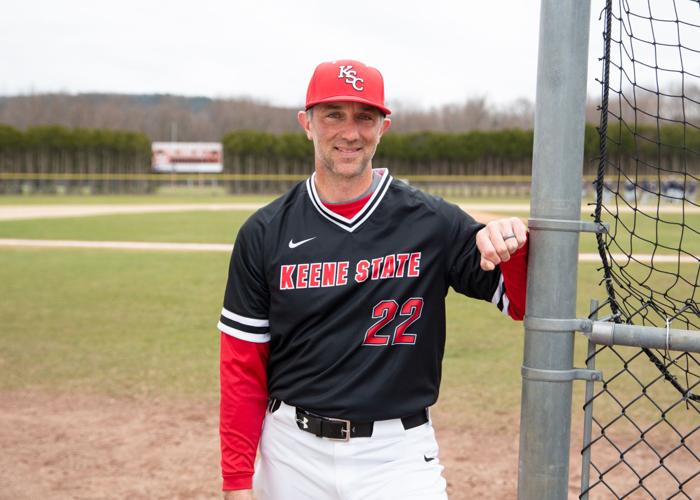 Justin Blood, Keene State College's head baseball coach, sits on the bench with his team at the Owl Athletic Complex before their game against Roger Williams Thursday.

Justin Blood’s desk in the windowless bowels of Keene State College’s Spaulding Gymnasium has the usual array of office provisions, plus an hours-old Starbucks drink, a scuffed baseball and an umpire’s clicker.

The baseball is his “binky,” he says with a laugh, the coffee certainly helps following a taut, extra-inning game the previous evening and the balls-strikes-outs clicker — well, you never know what baseball paraphernalia a coach may pull out of his pockets.

Blood’s lived-in desk is home, in many ways, figurative and literal. He’s spent his whole life immersed in baseball, from the Cape to California, and now he’s returned to his roots in the Monadnock Region as first-year coach at Keene State.

Blood’s rise through the coaching ranks is typical of many accomplished baseball lifers — player to assistant coach to manager of his own program — but his full-circle return to Keene features some anomalous twists along the way.

Go back to 2004, when Blood retired not as a washed-up player but a 23-year-old pitching prospect who very well could have made it to the Major Leagues.

“It was no fun to go to the park,” Blood that spring told Jim Fennell, formerly of The Sentinel and then of the Union Leader. “When you care about something so much and you don’t want to go and do it, then you have to separate yourself from it.”

Looking back at that sentiment almost 20 years later, the 42-year-old Blood says, “I’ve never regretted the decision. Never regretted it, not even once. I look at it as getting my master’s degree [in baseball].”

Now, as a coach who has been a part of turning around several college baseball programs, including his own at the University of Hartford, he’s stepping away from Division I to come home. It’s Blood once again being true to himself by being unconventional.

He turned around a middling mid-major Division I program at Hartford, one that was 6-43 the season before he got there in 2011. Conventionally, if he were to leave, the next step would be to a major program in a major conference. He is well-known in the college baseball coaching landscape. Twice Baseball America tabbed him one of the top 10 coaches under the age of 40 in the nation when he was at Hartford. In 2018 he was the America East Conference Coach of the Year, leading the Hawks to the NCAA tournament.

Prior to taking the Hartford post, he had a six-year run as pitching coach and recruiting coordinator at the University of Connecticut, where he made an indelible impression.

“Hartford made a tremendous hire,” UConn Coach Jim Penders said at the time. “When Justin got here, and he was only 25, I considered him wise. He is wise beyond his years. [Hartford Athletic Director] Pat Meiser and [school President] Walt Harrison are going to be rewarded for this for many years to come.”

But when Hartford decided last spring to drop its athletics program from Division I to Division III — the non-scholarship level on the NCAA ladder — the wheels turned swiftly. Blood and his wife, Hannah, had talked for some time about wanting to come home rather than resettling in different parts of the country if attractive coaching jobs opened up.

Hartford dropping to Division III turned out to be one stimulus; the retirement of 35-year Keene State Coach Ken Howe was another. And Hannah was directly connected to Keene: Her parents, Scott and Christine Clarke, run Douglas Co., which sells cuddly stuffed toys. Scott is president, Christine is creative director and Hannah is the infant product manager and often traveled to Keene from their home in Vernon, Conn.

“When that stuff came out [at Hartford], her mom sent me a text message about Ken Howe and she said, ‘Oh, now you can come back home,’ ” Blood said.

It happened quickly. Hartford’s announcement came in May, and Blood was hired at Keene State in July. Howe, he said, along with many others, was an advocate in the whirlwind process. “We had always talked about coming back home. We thought this could be really good so, yeah, we took the leap,” Blood said.

The housing crunch being what it is, the family is still living with Hannah’s parents. That includes son Jackson, who turns 14 later this month, and daughter Harper, 12. As kids themselves, the couple lived 2 miles apart in Swanzey, dated in high school, went their own ways in college, then reconnected across the country in their 20s.

“She grew up on one side of the Cresson Bridge and me on the other,” Blood said. “She’s on the Monadnock side; I was in a log cabin off Route 10.”

Blood came up through the local youth baseball ranks, playing for coaches Harold Secore in Babe Ruth, Gary Rouleau at Monadnock Regional High and John Watterson on Keene’s Gordon-Bissell American Legion Post 4 teams. He was an exceptional left-handed pitcher, but not highly sought after by college teams. He toured Wheaton College and St. Joseph’s of Maine, but settled on Franklin Pierce when then-baseball coach David Chadbourne — who is still the university’s men’s basketball coach — recruited him.

Franklin Pierce was a baseball afterthought in the late 1990s, a program that never had a winning record. Its field across the street from Pearly Pond was often under water and barely playable during the spring, and its coaches were part-timers. Chadbourne told Blood that the team was preparing to hire a full-time coach for the 1999 season, so Blood took a chance.

“[The coach] ended up being Jayson King and the rest is history,” Blood said. “It was one of those things — sometimes you need a lucky bounce and I got a lucky bounce.”

With Blood as his ace on the mound, King soon turned Franklin Pierce into a regional powerhouse and it remains so today. King has since moved on as baseball coach at Division I Dayton University, but the bond formed between Blood and King is deep — King was even a groomsman at Blood’s wedding. It was also Blood’s first up-close look at what it takes to turn a program around.

“I’ve had a chance to live it as a player, what it’s like and see it happen, and what needs to happen,” he said.

Interestingly, Blood says he really didn’t realize he had potential to play professional baseball until after his sophomore season, when he pitched in the New England Intercollegiate Baseball Association all-star game at Dodd Stadium in Norwich, Conn. It was the first time he was clocked on a radar gun, and he was stunned to see he hit 90 mph.

“I didn’t know what my stuff was — I always tried to maximize [my potential] and I had a great sophomore year — but I didn’t know,” he said.

After his junior season Blood was taken by Seattle in the ninth round of the Major League Baseball Amateur Draft, and pitched three years in the Mariners’ system. He reached advanced Class A his third season, in 2003, going 5-2 with a 3.07 ERA for Inland Empire of San Bernardino, Calif., in a league notorious for its hitter-friendly ballparks. Double-A was the likely next stop, which would have put Blood in sight of the majors. Instead, he retired.

After living in Colorado for a year, he returned to Rindge to finish off his degree in sports and recreation management. “It was important to me to graduate from Pierce and not someplace else,” Blood said.

Blood’s coaching tenure includes working with King as an assistant at Franklin Pierce and with Scott Pickler, the longtime coach at Yarmouth-Dennis in the elite summer Cape Cod League. That’s where he met another Y-D assistant, Chris Podeszwa, who was an assistant at UConn and urged Blood to apply there.

Penders, the head coach, and Blood connected immediately, and Blood was named pitching coach and recruiting coordinator. In his six years at UConn, Blood coached and recruited several players who are Major Leaguers today, including Red Sox reliever Matt Barnes and Toronto’s George Springer along with Scott Oberg and Nick Ahmed. Sean Newcomb, now with the Atlanta Braves, pitched for Blood at Hartford.

When Blood left UConn for Hartford, Barnes said, “He’s helped make me a better pitcher and a better person. We’re going to miss him here, but to get the chance to be a head coach at his age, he couldn’t pass that up.”

Eleven years later, Blood is back home. He says he’s as excited about the Keene State program as any he’s inherited. When the team rallied from a 5-2 deficit in the ninth inning for a 6-5 triumph over Castleton Tuesday, he was as ecstatic as he’s ever been after a walk-off win, he says.

Keene State is 6-16 this season, but he has high praise for the progress and commitment his players are making. Division I, II or III, doesn’t matter, “baseball is baseball,” he says and rebuilding a program is about teaching and learning.

He says he made more recruiting visits last fall than in any other program he’s been in, and has 22 new players coming to Keene State next fall. He also volunteers as a board member in the Greater Keene Youth Baseball and Softball Association, saying, “I’m just the local college coach who wants to help local youth baseball.”

Meanwhile, the search for a house continues; luckily, he says, his in-laws are terrific people and understand that the family wants to find the perfect fit.

After all, Blood says, “I plan on dying in this house.”

This has been changed to reflect that Justin Blood has a son and a daughter.

At a glance: Justin Blood