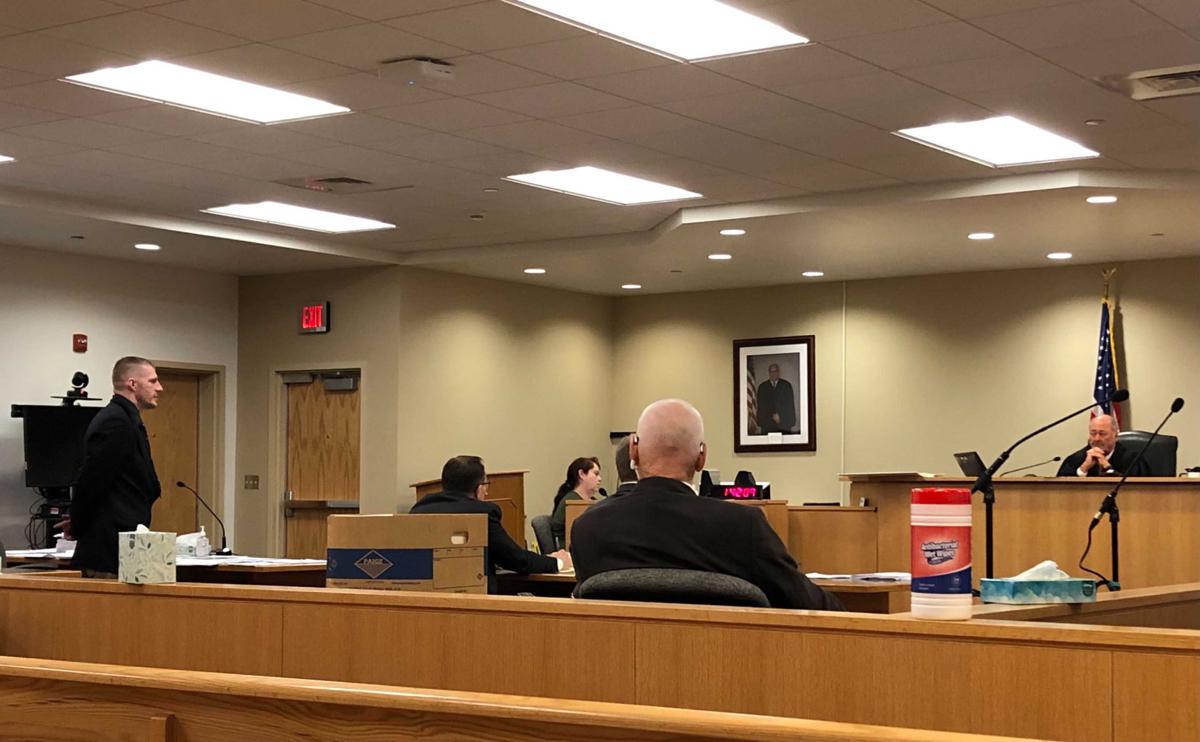 James D. “J.D.” Crawford of Alstead,left, addresses a witness Wednesday during his trial for charges alleging that he beat and sexually assaulted a teenager. Crawford, who represented himself at the trial in Cheshire County Superior Court, was found guilty by a jury on eight counts of aggravated sexual assault, in addition to second-degree assault and other charges. 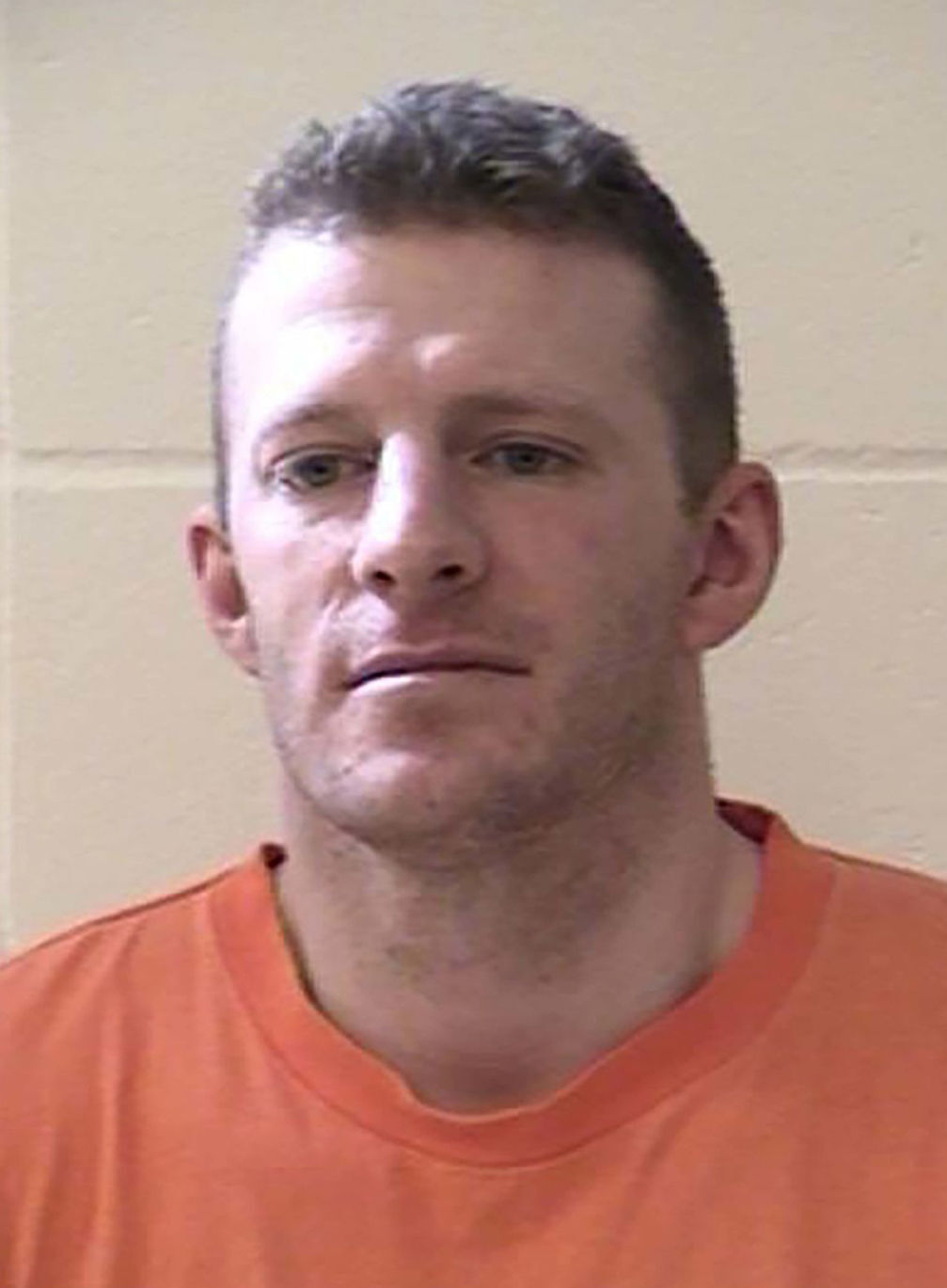 Editor’s note: This article contains descriptions of sexual assault and other violence. These details are included because of their relevance to the case.

An Alstead man accused of beating and sexually assaulting a teenager was convicted Thursday on charges connected to those allegations after a four-day trial in Cheshire County Superior Court.

James D. “J.D.” Crawford, who represented himself in the trial, was found guilty by a jury on eight counts of aggravated sexual assault, in addition to second-degree assault, falsifying evidence and two counts of witness tampering, all felonies. He is scheduled to be sentenced within 45 days and could face up to life behind bars.

The charges mostly stem from spring 2019, when Crawford, now 33, is alleged to have broken a teenage girl’s jaw and raped her about a month later.

Testifying in court Wednesday, the girl, who is now an adult, said that after he broke her jaw, Crawford and his then-wife, Jennifer Ritchie, pressured her to lie to hospital staff about the incident to protect him. In a separate incident the next month, the girl, who knew Crawford and was 16 at the time, said he beat and raped her that night before later pressuring her to refuse a rape test and to lie to police about what had happened.

N.H. State Police arrested Crawford and Ritchie, 38, also of Alstead, in January 2020 after a “lengthy investigation” that began the previous year, State Police said in a news release at the time. Crawford was taken into custody after fleeing on foot from officers, which prompted schools in Alstead, Acworth and Langdon to go into “secure campus” mode as a precaution, The Sentinel reported previously, citing information from police and the Fall Mountain Regional School District.

Ritchie was charged with witness tampering, a felony, and endangering the welfare of a child, a misdemeanor. The felony charge will be dropped in exchange for new misdemeanor charges, however, as part of a plea deal with prosecutors in which Ritchie agreed to testify against Crawford, according to Assistant Cheshire County Attorney Keith Clouatre.

Crawford has been held at the Cheshire County jail in Keene since his arraignment early last year. He pleaded not guilty to all charges and has claimed the allegations were invented, The Sentinel reported in February 2020.

According to an N.H. State Police affidavit, the investigation into Crawford and Ritchie began in May 2019, when police received a call about a girl who had been walking along a road, naked except for a blue tarp she had wrapped herself in.

The caller said she appeared to have been beaten, and police later documented black eyes, bruises and scrapes on her legs and arms, and what looked like a belt mark on her back, N.H. State Police Trooper William Neilsen wrote. Security footage from a neighbor’s house showed the girl fleeing the home Ritchie and Crawford were in around midnight, according to Neilsen’s affidavit.

The girl initially said a stranger had forced her into his pickup, attacked her and torn off her clothes after she left the house, but later told investigators that Crawford hit her and then raped her as Ritchie watched without intervening, the affidavit states.

During the trial, the girl testified that the day before she was found along the road, Crawford had hit and choked her and then whipped her with a belt. Later that night, she said he raped her.

“I was terrified,” she said, adding that she screamed for him to stop but eventually gave up her protestations because “there was no point.”

The girl said she fled the house naked after Crawford told her to get an icepack for her face from the kitchen, hiding in the woods overnight. The next morning, she went to a relative’s house nearby, where she said Crawford and Ritchie found her and took her to the hospital for her injuries, telling her on the way to fabricate the story that she’d been abducted.

On their way there, the girl said during the trial, Crawford threw his belt out of a window to keep it from being connected to the whipping marks on her body. At Crawford’s behest, she declined a rape test at the hospital because it would’ve found his DNA, she said.

She also testified that in a separate incident about a month earlier, Crawford had punched her in the face and later shoved her into a bed, breaking her jaw.

“I thought all my teeth were out because I couldn’t feel anything,” she said.

To protect Crawford from being held responsible for that incident, he and Ritchie pressured the girl to tell hospital staff that she’d broken her jaw when her dog pulled her into the bed of a truck, she said.

The aggravated sexual assault charges that Crawford was convicted on included two alleging that he’d continuously sexually assaulted the girl since she was 14.

Crawford has a criminal history that includes convictions for domestic violence and felony criminal restraint — the latter from a 2017 case in which he scratched a girlfriend in the face, hit her head against a window, headbutted her and grabbed her by the leg and hair, according to a police affidavit.

He was also charged with aggravated felonious sexual assault in 2016, in a case that alleged he raped a woman in Alstead, but prosecutors dropped the charges later that year. The court file contains no explanation for the dismissal. Crawford had pleaded not guilty in that case.

In a separate case from the trial held this week, Cheshire County prosecutors have also alleged that Crawford sexually assaulted a different child in the years before his 2020 arrest.

Crawford was charged in that case with three counts of aggravated felonious sexual assault, alleging he touched the child’s genitals at least twice between 2014 and his arrest. The child was under 13 at the time, according to the indictments. Crawford was arraigned on those charges in May, and the case is still pending.

In the case tried this week, Crawford represented himself after having informed his previous attorney, Lisa Wellman-Ally, earlier this year that he no longer wanted her services.

Wellman-Ally asked the court in March to evaluate whether Crawford was competent to stand trial, writing that his detention appeared to be “causing a deterioration of his mental state so that he is becoming more obsessed with ‘righting wrongs’ done to him by the judicial system, [than] discussing realistic defenses to this matter.” He was allowed to represent himself after an evaluation by the N.H. Office of the Forensic Examiner.

Several times during the trial, Judge Kenneth C. Brown admonished Crawford for directing statements at witnesses rather than asking them questions and for muttering about the proceedings under his breath, which Brown told jurors to ignore.

Much of Crawford’s defense consisted of questioning witnesses, including Ritchie, whether they remembered their accounts accurately and also asking them to attest to his good character.

In his closing argument, however, Clouatre, the assistant county attorney, told jurors that “nobody makes up a story” like the one the girl recounted. Clouatre also argued that Crawford “is the definition of the term” gaslighting, a form of psychological manipulation where someone tries to get a person to question their own lived reality or memories.

“There’s distractions and there’s defenses,” he said. “In this case, there were a lot of distractions.”

In addition to the felony charges, jurors also found Crawford guilty of resisting arrest, a misdemeanor.

Clouatre said the verdict was “a long time coming.”

“The victims in this case were extremely strong to stand up and do this,” he said.